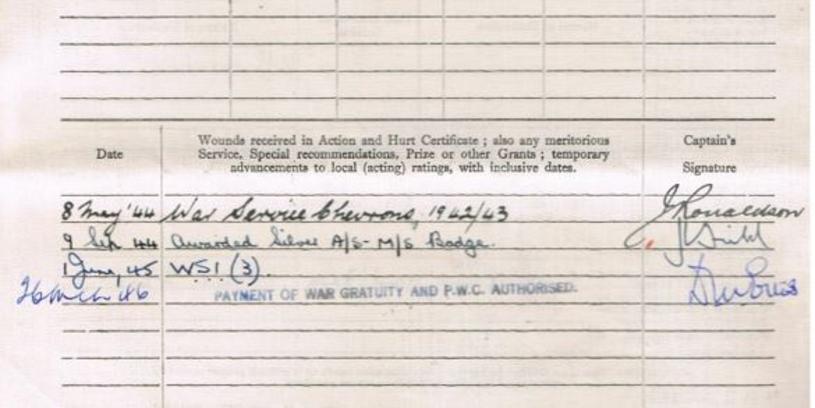 Officers and Crew of BYMS 2182, possibly when she was transferred to Great Britain on the 7 October 1943  or shortly after.​ 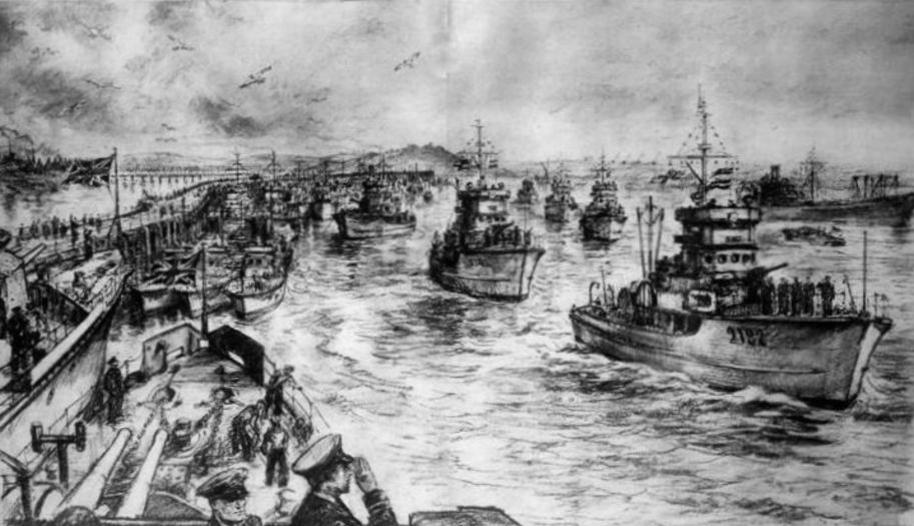 ​Next of kin can get records of their family members WW2 Navy records  from,

BYMS 2182's journey to war. As written on the back of a photograph of BYMS 2182 by  Richard Burden 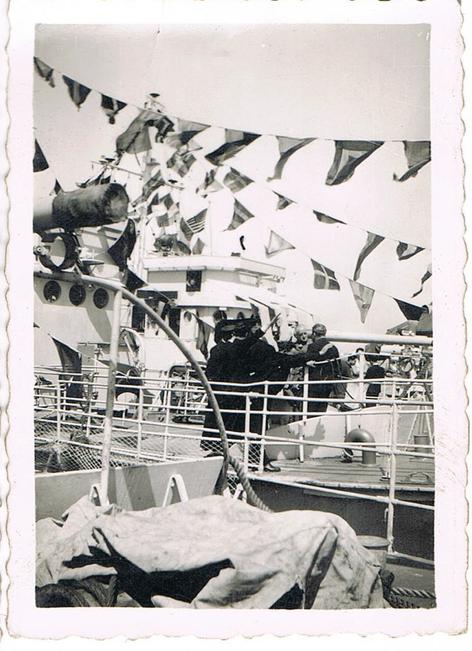 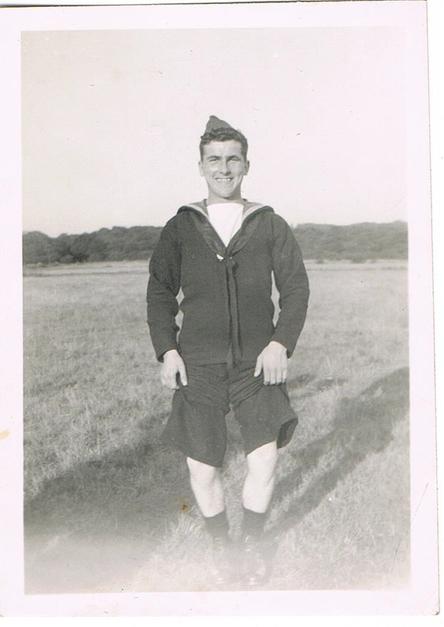 Although minesweeper had swept the area time and time again, mines were fitted with delay mechanisms. Some mines had timers and would lay on the seabed, arming themselves when a certain amount of time had elapsed. Others had counters and would count the number of ships which passed over them. A mine sweeper could sweep fifteen times and not detonate the mine, only to have it explode when the sixteenth ship passed over it. 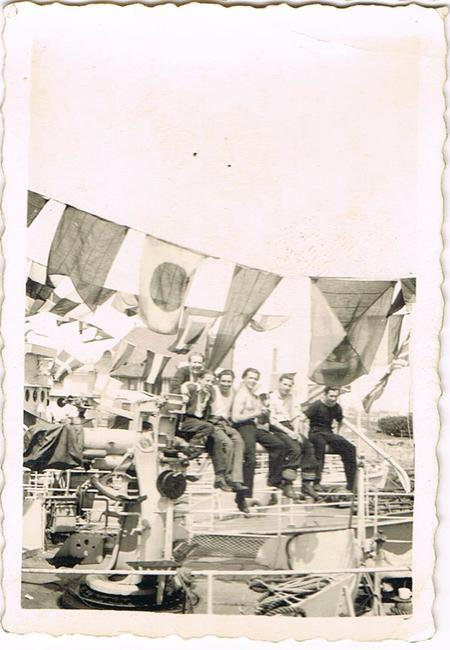 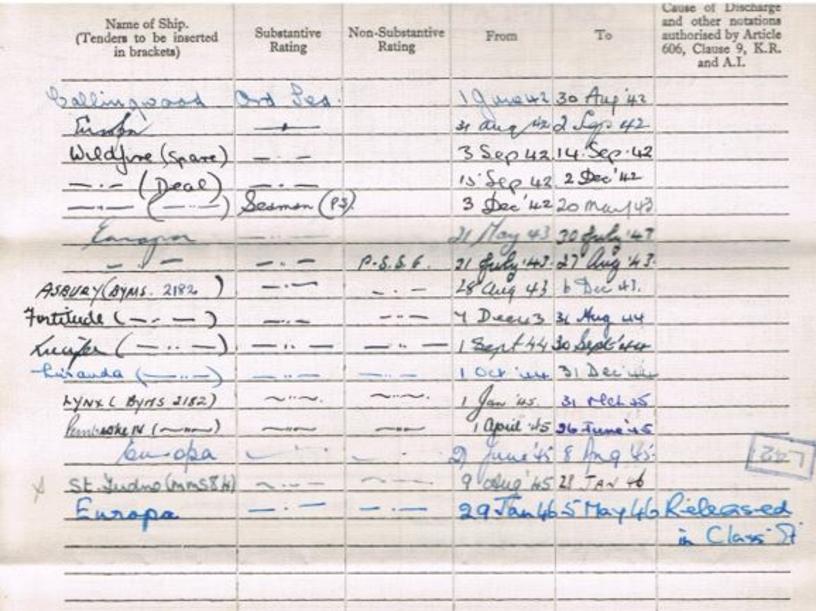 Although, every day they risked their lives, the men of the minesweepers never lost their sense of humour. On the back of this photograph, his Dad had written, "Richard being silly." 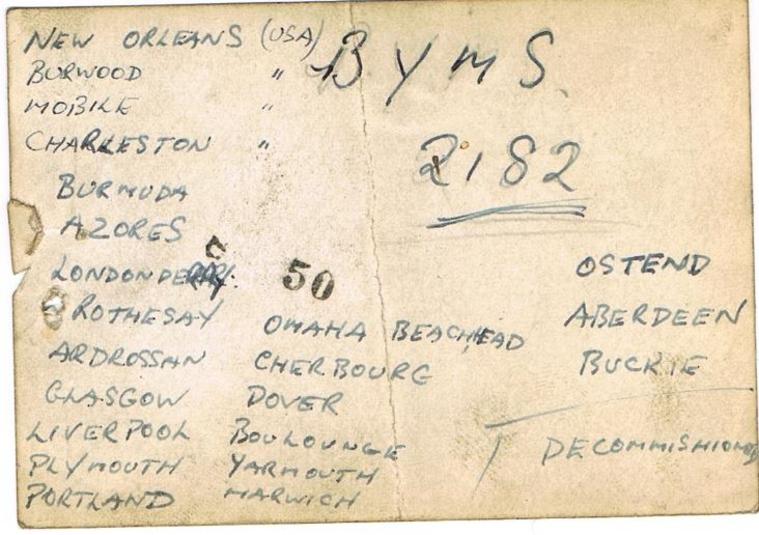 His nephew John tell us, "Needless to say my uncle didn't talk about his war experiences (although he was a lively and an extrovert character) and he never married or had any children, but luckily we hung on to his papers and photos. Sadly he died suddenly in 1976 aged only 54. He had been a London bus driver for his whole time since demob working out of the Hackney LT garage.

BYMS 2182 in the illustration, "Leaving for service under foreign flags: Farewell to the BYMS of the Mine Sweeping Flotillas."  Illustrated London News Sep 20 1947.) Queenborough 1947.

It was the minesweepers, including BYMS 2182, which led the invasion fleet to Omaha Beach in the American sector.  The minesweepers swept each war ship into its firing position. They continued sweeping right up to the shore until the sea became too shallow.  They went closer to the shore than any other vessels other than the landing-craft. Shells exploded around them, as unable to manoeuvre they swept in straight lines. Richard, a gunner, manning the BYMS's 3-inch gun , blasted away at the enemy on shore, using every opportunity to assist the American troops.

CHERBOURG.  With the Allies firmly on French soil it was important to capture a port. This port was Cherbourg. In order to attack Cherbourg from the sea, the mine sweepers which included BYMS 2182, had to clear the mines from the approaches. During this operation they came under heavy fire from German Shore Batteries at Cherbourg.

Richard and his crew mates travelled on a ship, possibly the Queen Mary, across the Atlantic to New York.  From new York they travelled by train to New Orleans where they picked up the Mine Sweeper BYMS 2182. British Yard Mine Sweepers were build in the United States handed over to Britain under the "Lend-Lease" Programme.

Fully loaded with fuel, including drums lashed to the deck, the 2182 crossed the stormy Atlantic in winter. Due to the winter weather the southern route was taken and the 2182 arrived at Bermuda on the 10 November 1943.  From there she continued on to Horta in the Azores to eventually arrive in Britain. Richard kept a record of the journey on the back of a photograph. 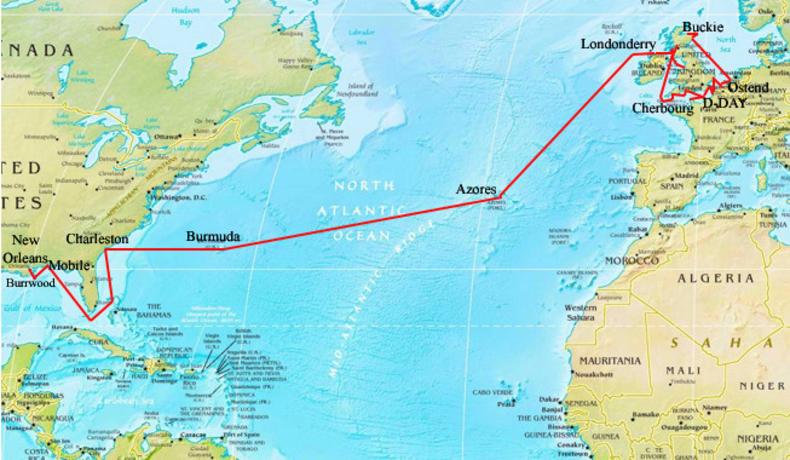 SCHELDT ESTUARY AND ANTWERP. As the Allied armies broke out of the Normandy beach-head and fought their way northwards the mine sweepers follow along the coast. BYMS 2182 took part in clearing the approaches to Antwerp opening up a large intact port to resupply the army close to the front. Cargo ships poured into Antwerp, discharging their vital cargoes of war materials. Two weeks later the German Army counter attacked, in what was to be known as the Battle of the Bulge. Vital war supplies were at hand, not hundreds of miles away at the Normandy beach-head thanks to the mine sweepers.

HOLLAND.The Dutch people called it the Hunger Winter. After Market Garden (a Bridge Too Far) when the Dutch train drivers went on strike to help the Allies, the occupying German Army stopped the transport of all food and fuel into large parts of Holland. Tens of thousands of Dutch people starved to death. BYMS 2182 was part of the armada of Mine Sweeper commanded by Captain Hopper of HMS St Tudno, the former headquarters ship at Queenborough. The minesweeper opened up the Dutch ports allowing food and humanitarian aid to flood in saving thousands of lives. 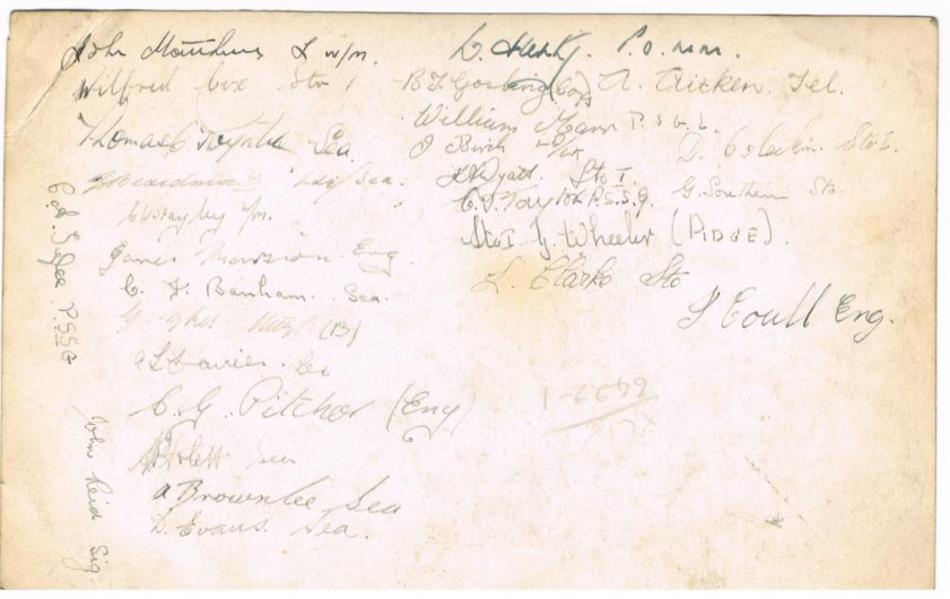 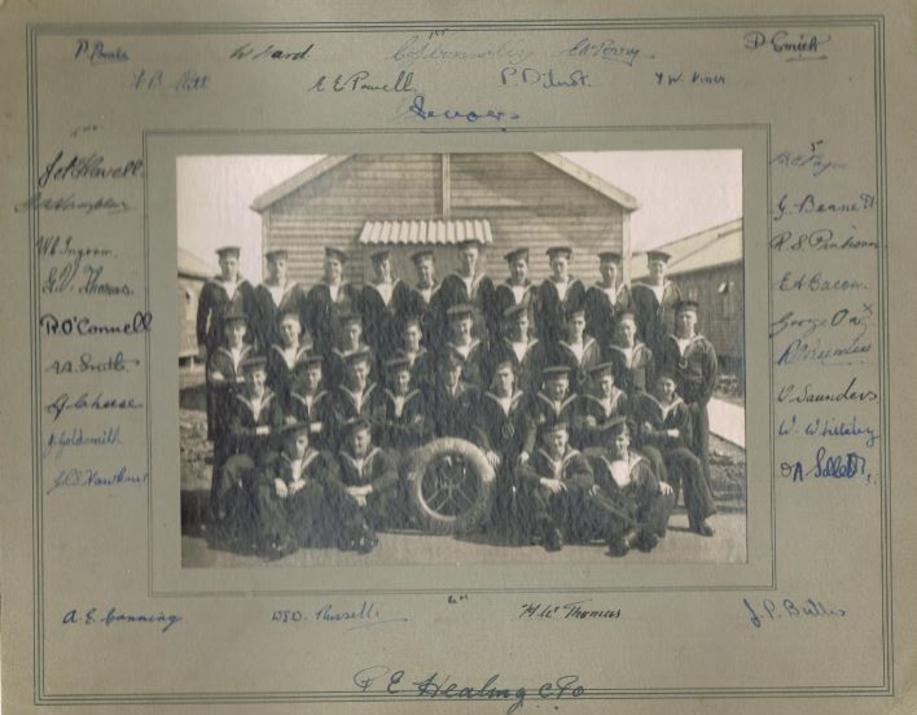 Richard Burden with ship mates. Richard is in the middle. 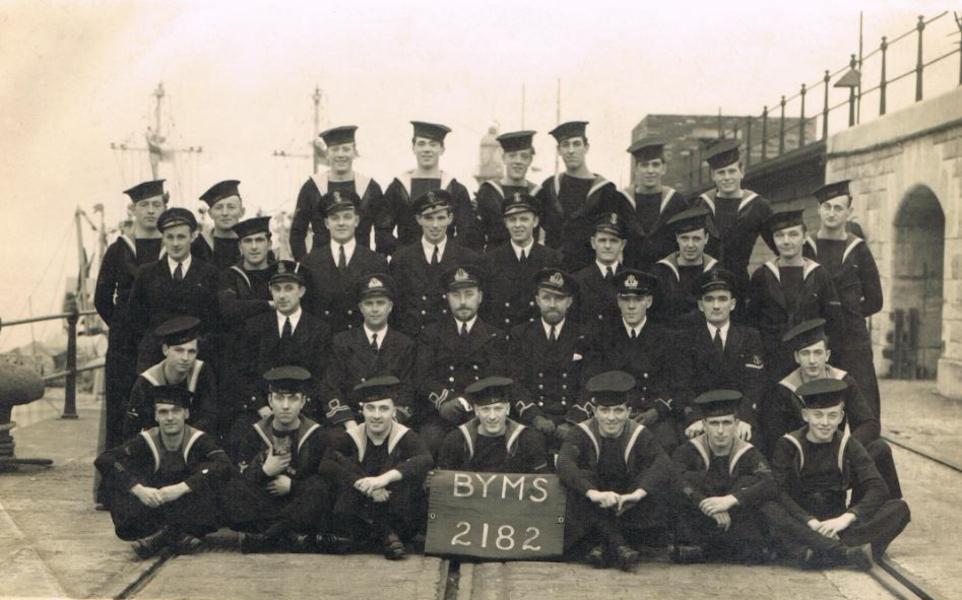 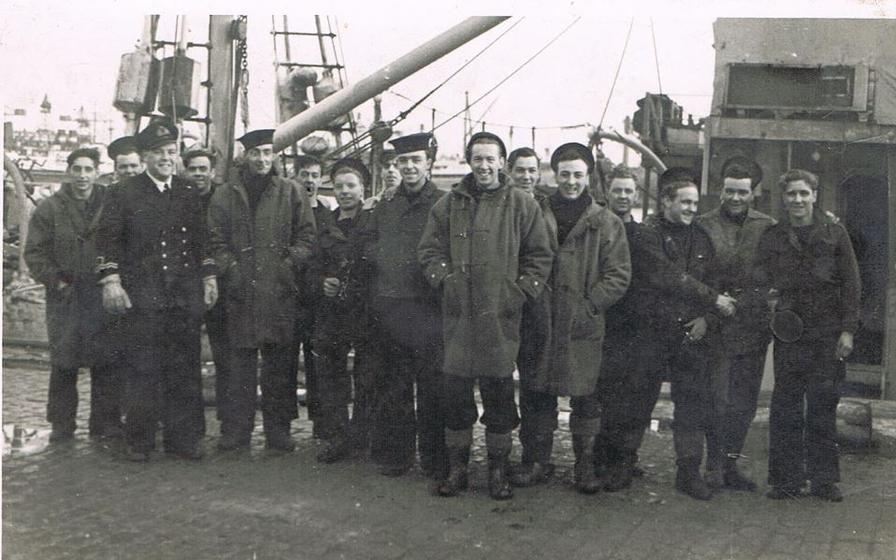 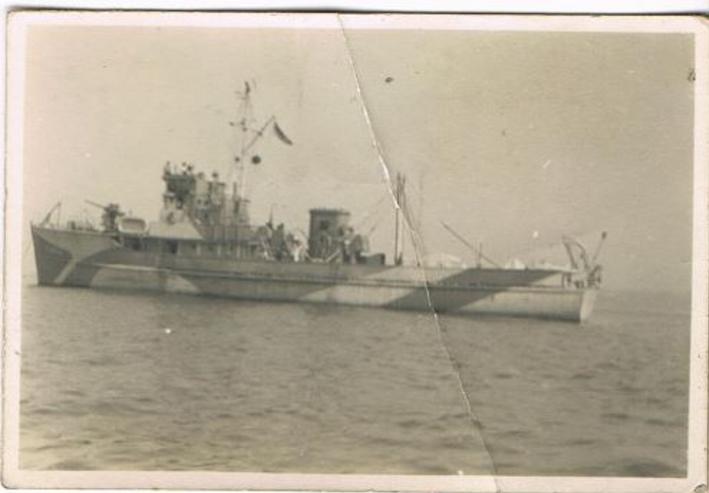 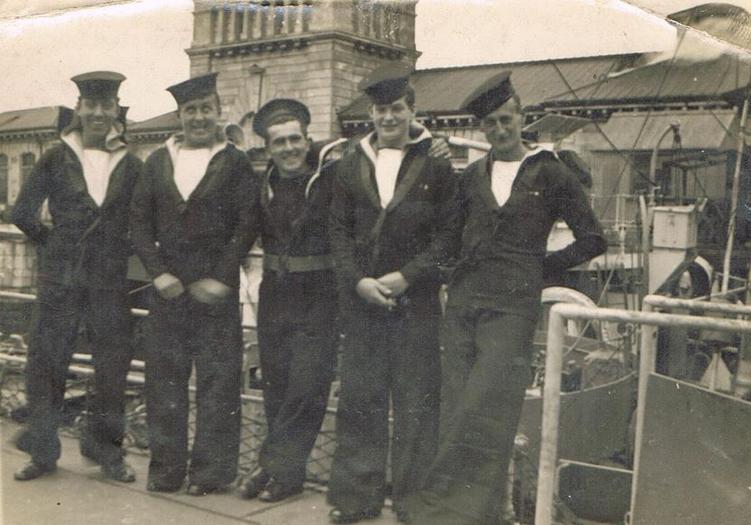 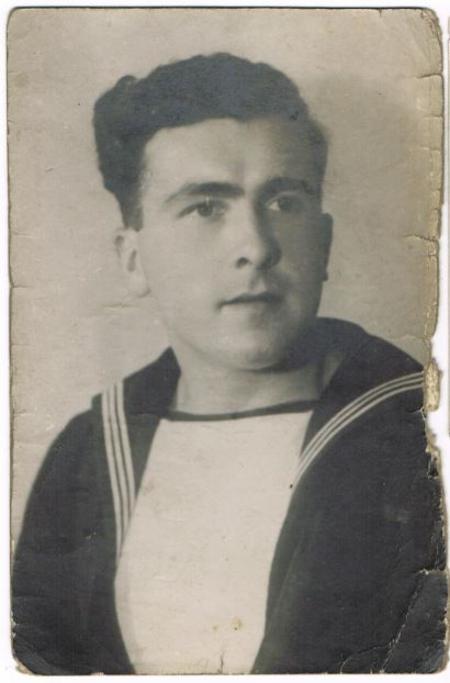 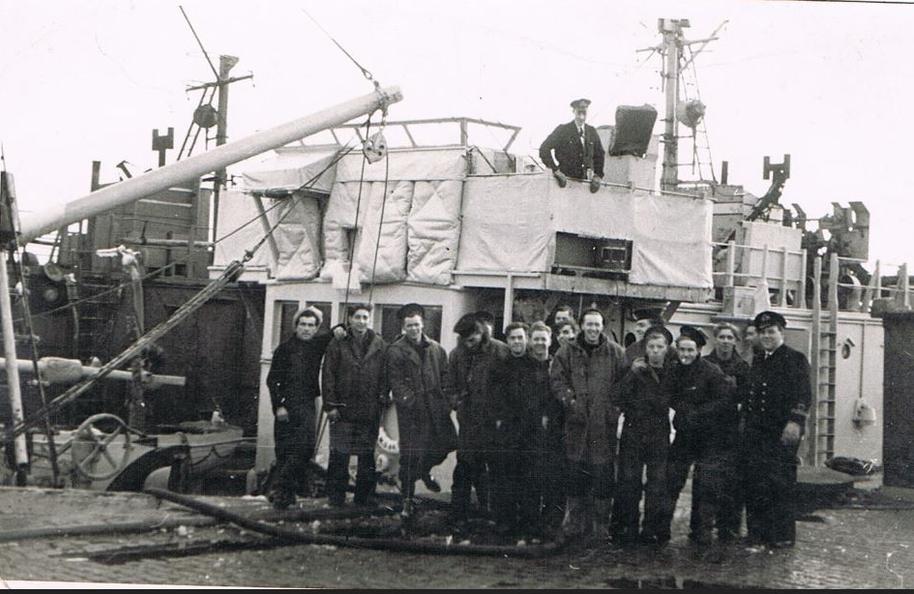 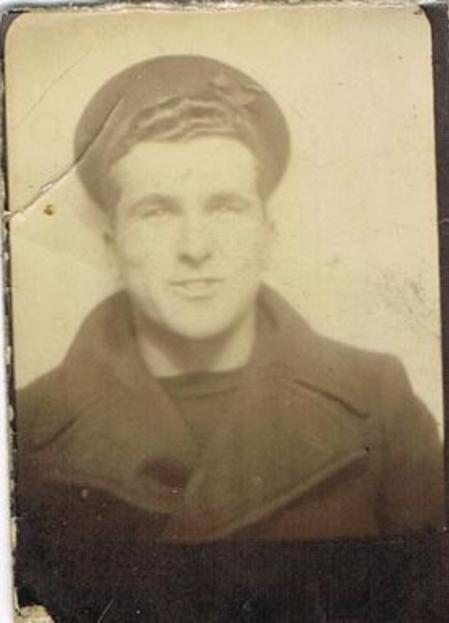 BYMS 2182's journey to war.
Built at H. C. Grebe, Chicago, on the Great Lakes,  BYMS 2182, with a US Navy crew on board, journeyed from Chicago down the  Michigan Canal which connects Lake Michigan to the Mississippi River and New Orleans, where her British crew picked her up and sailed her back to England via Burmuda and the Azores. She would arrive at  Portland in preparation for the Allied invasion of German occupied Europe, D-Day. 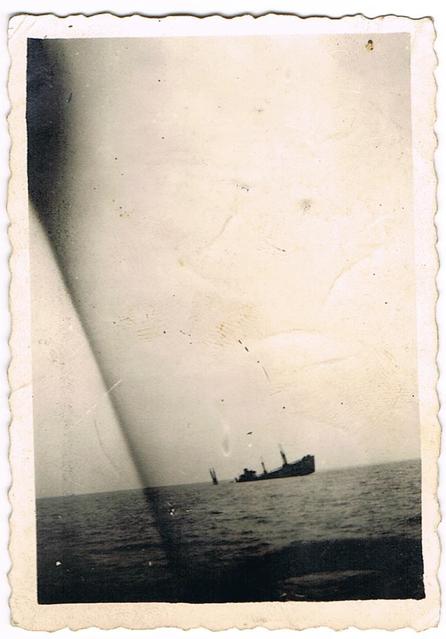 After VE Day (Victory in Europe)  on the 8th May 1945, the war did not finish for Richard Burden.  He was transferred to MMS 84 and continued to risk his life every day clearing the German minefields and the German ports  allowing food and aid to arrive for the desperate German population .

Europa. HMS Europa was the shore establishment for the Royal Naval Patrol Service in Lowestoft. (The Sparrows Nest.)

Wildfire. HMS Wildfire was the Royal Navy land base at Sheerness and Queenborough (Wildfire III), Kent.

Fortitude. Operation Fortitude  was to mislead the enemy as to where the Allies would land in Europe.
Lynx. HMS Lynx was a Royal Navy shore base at Dover.
Pembroke. HMS Pembroke was the Royal Naval Shore Base at Chatham.

St Tudno. MMS 84. St Tudno was the Minesweeper Base Ship originally based at Queenborough but led the Mine Sweeping Flotilla's sweeping the Scheldt estuary , the Dutch Ports and the German minefields

Crew on quayside, standing in front of MMS 84, Richard is on the extreme left of the picture.

Names written on back of photograph of the officers and crew of the BYMS 2182. 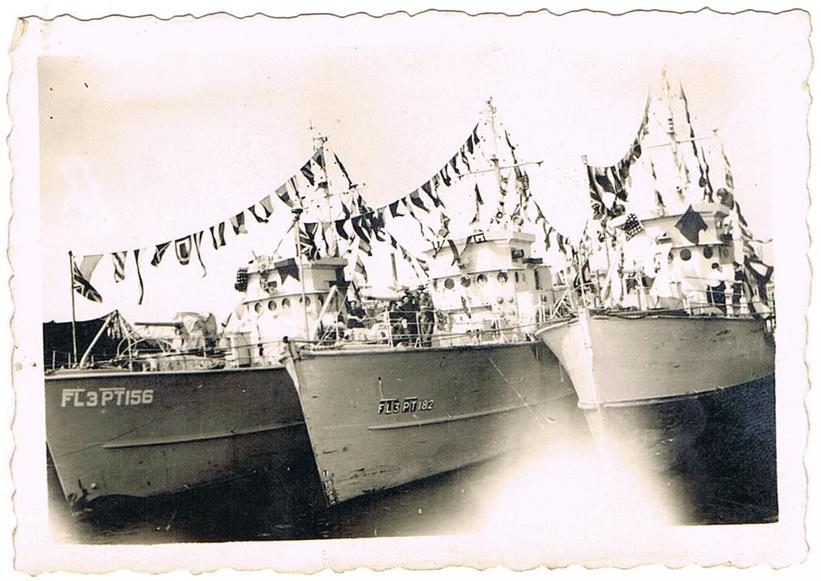 Crew of BYMS 2182 at the handover ceremony, enjoying a break from war in a country were there is no rationing. 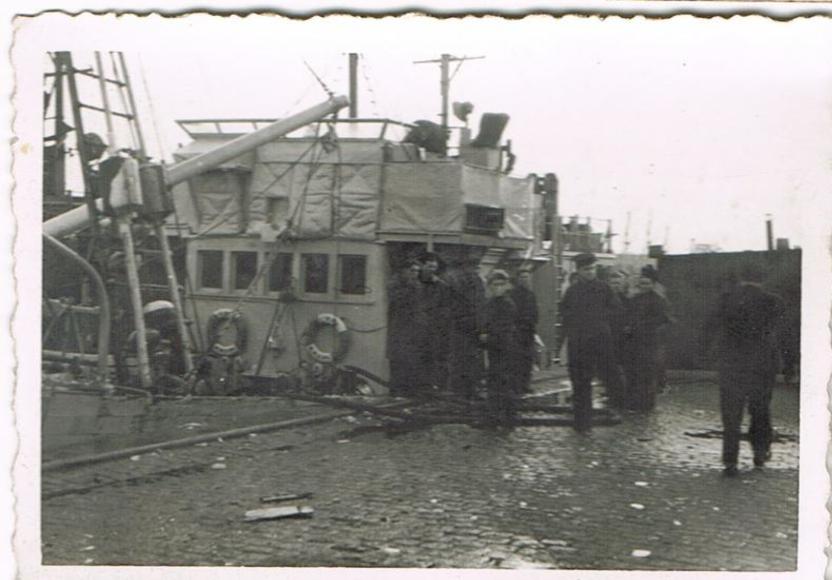