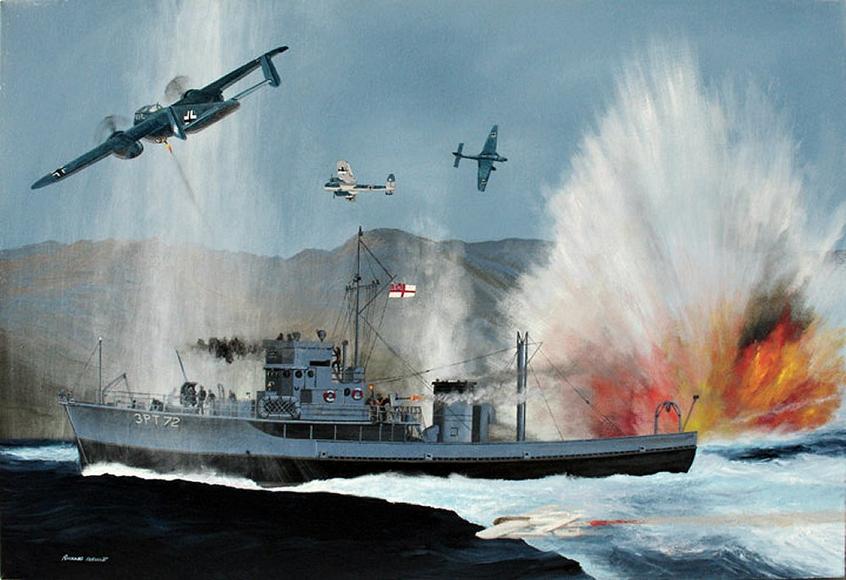 BYMS 2072. "Moonlit Assault in the Aegean", painted by  Richard DeRosset.

8, Nov 1943, BYMS 2072 was diverted to Beirut where she re-joined BYMS73 and embarked men and supplies bound for Leros. BYMS 2072 carried four army officers, forty-six troops and stores while BYMS 2073, carried three army officers and forty-five men of the Buffs and Signals.

11 Nov 1943, BYMS 2072 and 2073 arrived at Alinda Bay on the east coast of Leros and disembarked the urgently needed men and supplies. After taking cover throughout the next day, BYMS 2072 parted company with her sister ship BYMS 2073 to return to Alinda Bay with cables for the Army Signal Corps.

In early evening, as she approached Leros, BYMS 2072 was attacked by the Luftwaffe. She took immediate evasive action, with four bombs narrowly missing her. Out of sight, and unheard above the noise of the ship’s engines, four German DO-217 bombers, armed with eight glider bombs, attacked.

The 2074 experienced a direct hit on the port side. The explosion blew the port 20mm gun, its platform and two gunners into the sea.  As BYMS 2072 heeled over to 45 degrees the mast collapsed resulting in the loss of a third crewman and injury to another.

BYMS 2072 limped back in the darkness towards her base for urgently needed repairs, to find herself in the middle of a German Invasion fleet.

The officer in charge Oberleutnant Hansjürgan Weissenborn hailed the BYMS 2072 and asked “Hello what ship?”. BYMS 2072 replied “we are a minesweeper looking for a safe place for the night.”

BYMS 2072 was ordered the follow the German vessel and two gunboats fell in behind her.
Suddenly, in the darkness and confusion a German vessel opened up at close range on the 2072. Other, close by,  vessels also fired on the stricken 2072 at point blank range.

Unable to return fire, (her gun had been blown into the sea when the glider bomb exploded) and sinking, the order was given to abandon ship.

Three men made it to shore at Linaria Bay on the west coast of Kalymnos, but the rest were taken prisoner and would spend the remainder of the war in a German Prisoner of war camp.

One of the men who made it to shore had been wounded in both legs and would be captured by the Germans, but the other two escaped and made it back to Alaxandria in Egypt. 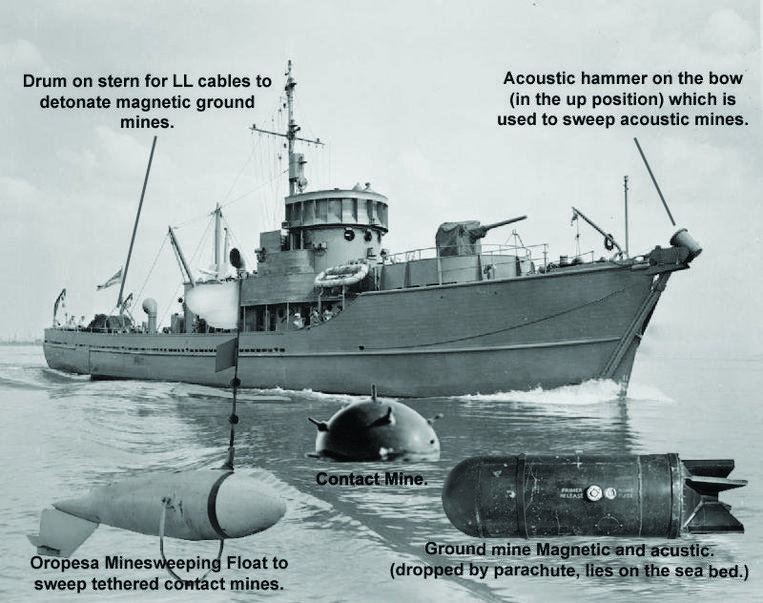