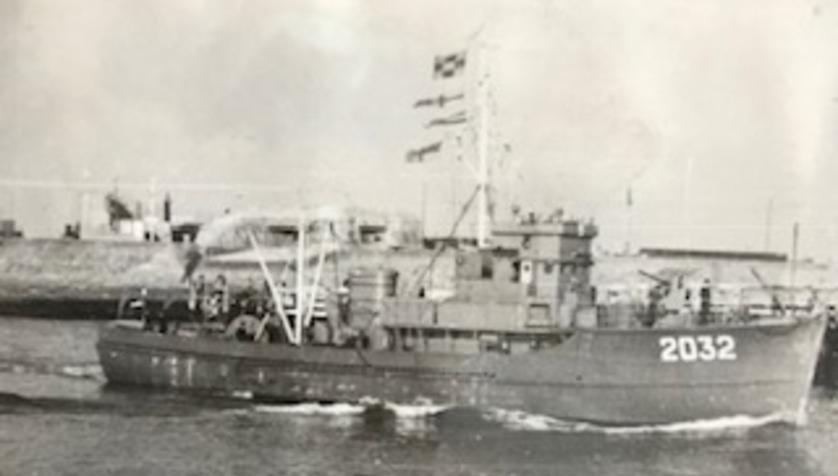 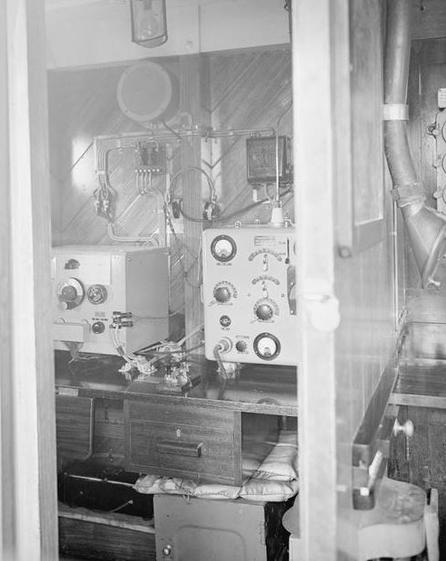 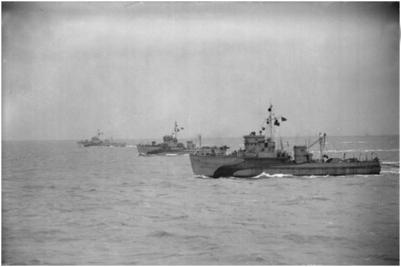 BYMS (British Yard Mine Sweeper) clearing the Scheldt to open up Antwerp.

Mick was responsible for collecting supplies from the supply ships when it arrive, being the Navy mistakes happened and on one occasion they had so many pairs of socks that he used to take kit bags full of them home on leave and give then to friends.

​Mick also tell of how in Holland the people were starving,  he and his crew mates would  feed the starving children from the ships supplies. 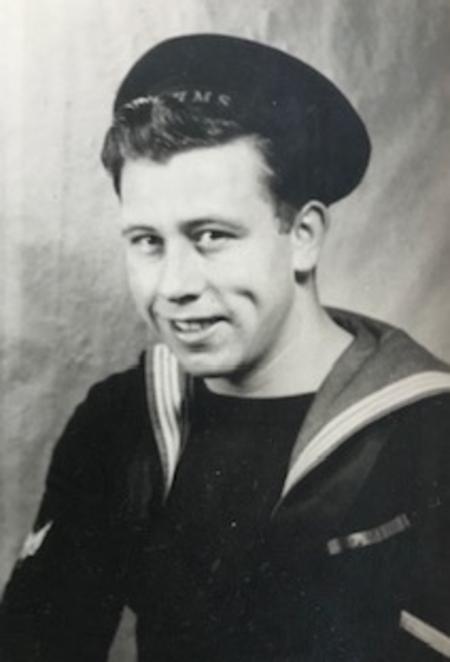 Alfred William David James was a Signal man on the BYMS 2032 (British Yard Mine Sweepers.)  BYMS were built in the United States of America and “sold” to Great Britain under the Lend Lease Programme. BYMS played a very important part in World War Two. They kept the sea lanes open allowing raw materials and war supplies to come flooding into England prior to the D-day landings. They were at the D-day beaches, going closer to the beaches than any other vessels other than the Landing Craft. They opened up the Scheldt Estuary allowing the Port of Antwerp to be used to unload vital war materials much closer to the Allied Front, and by so doing shortening the war. (This is written on many of their citations!) They opened the Dutch ports allowing food and humanitarian to be delivered to a starving Dutch population and in so doing saving many thousands of Dutch lives.

Alf joined the Royal Signals, but after an accident while practicing parachute jumps from a tower, was transferred to the Royal Navy. Almost at once he was shipped to New York on board the Queen Mary.

In New York he would crew a BYMS and sail it back across the Atlantic to England. Alf described the vessel as a wooden trawler fitted with two Trans-Am train diesel engines. Alf’s job was radio operator (sparks) and his skipper was originally a Norwegian fisherman.

WIRELESS CABIN on a MMS, similar to the one in which  Radio Operator "Sparks" Alfred James would have worked.

as told by his son David James.

Another member of the crew was also named Alfred and so as not to confuse them, the Skipper called would call him Mick. The name stuck until the day he died.

Leaving New York, they sailed their BYMS for Halifax in Canada from where they would make the perilous North Atlantic crossing. They left Halifax with their decks stacked with oil drums and a small rigged sail, for stabilising the boat in the big Atlantic swell.  In mid-Atlantic their BYMS were refuelled by a tanker. Sailing around the north of Scotland and down the East coast of England, he would eventually arrive at Wildfire III, Queenborough.

David  tells a story his Dad told him of being trapped in thick fog one night in the English Channel when a fast-moving giant ship almost run them down. It was so close they could have reach out and touch its hull. It caused their BYMS to rock violently. The large ship turned out to be a German battleship being chased by the Royal Navy.

Like many of the BYMS “Mick’s” vessel ( Alf is now called Mick)  swept ahead of the Allied D-day invasion fleet. The BYMS swept each warship into its firing position and continued sweeping right up to the beach.

Mick’s BYMS was sweeping the Normandy beaches at night just before the commencement of the D-day landing bombardments. They were running silently without lights of any kind. They were so close to the D-day beach that they could hear the waves breaking on the beach and make out voices of the enemy on the shore.

Suddenly the oven in the galley caught fire, lighting up the BYMS’s interior. Mick always laughed about this as panic set in and all hands doused the fire. Luckily for them they weren't seen and could carry on sweeping.​