Although we have no photograph of the Arcady, she would have looked similar to these British armed trawlers minesweeping in the North Sea.

Arcady was a drifter, a fishing vessel using long drift nets in the North Sea. It is believed she served as a minesweeper during World War One as the following seems to indicate: 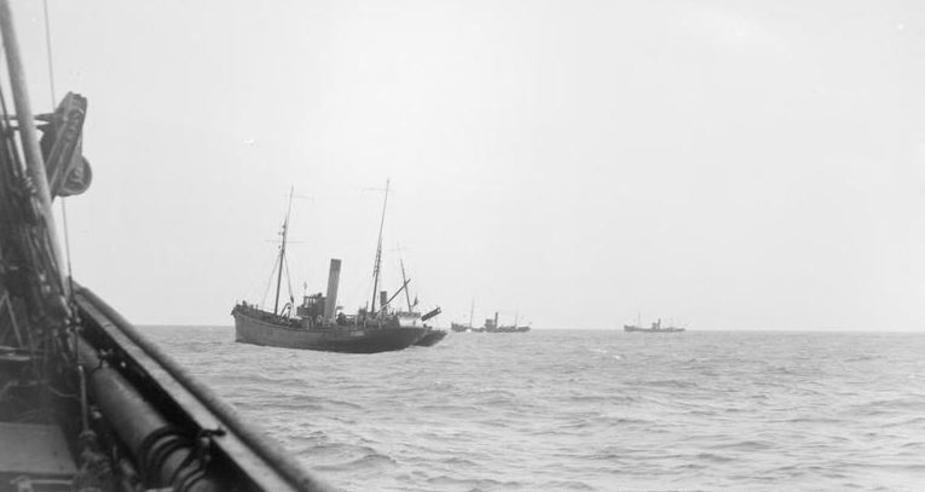 The Arcady was requisitioned by the Admiralty in December 1939 to serve as a patrol boat/minesweeper.

In 1939/40 she was based at Portsmouth, but with extensive minelaying in the Thames Estuary and East Coast by German surface vessels and planes, the Arcady was transferred to Sheerness to serve at the Minesweeper base, Wildfire III, Queenborough.

Dec 1939, the Arcady was requisitioned by the Royal Navy.

When Drifters and Trawlers were requisitioned, often their Captain and crews volunteered and came with the vessel.

1942, Arcady was at Wildfire III, her Captain was Temporary. Skipper R.N.R.  E. W. B. Norton who joined her on 30 Jan 40. Skipper or Skipper Lieutenant is a designation usually given to a highly experienced Captain with extensive local knowledge who has had no formal training in the disciplines of the Royal Navy.

For more information on what the Arcady was doing and when go here,