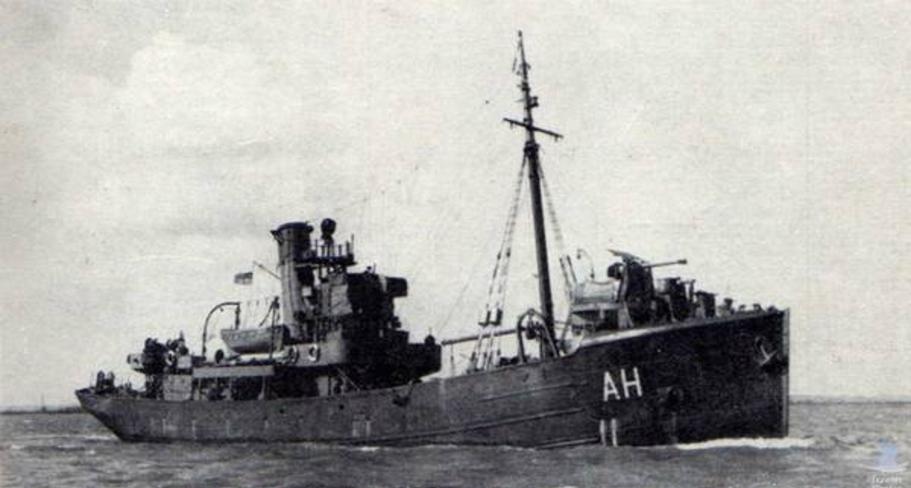 Alf Emery’s MID certificate and medals which include the 1939 – 1945 Star, the Atlantic Star with France and Germany Clasp, the WW2 Defence Medal, the War Medal 1939 – 1945 with Mentioned in Despatches Oak Leaf, the Naval Patrol Service Medal, with the MS AS Badge. (Mine Sweeper, Anti-Submarine Badge, worn on the left sleeve, four inches above the cuff.) 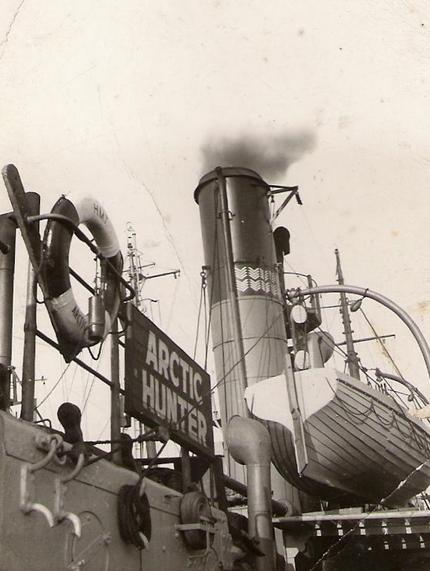 It is thought that the officers and crew of the Arctic Hunter and other minesweepers like her would have been transferred to the new, purpose built, MMS’s (Motor Mine Sweeper) as they arrived at Wildfire III, Queenborough. 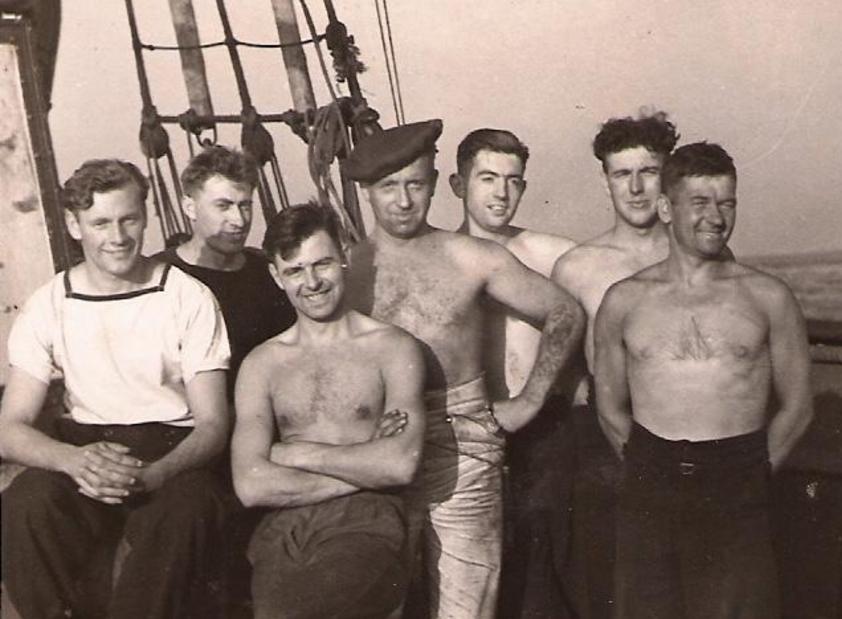 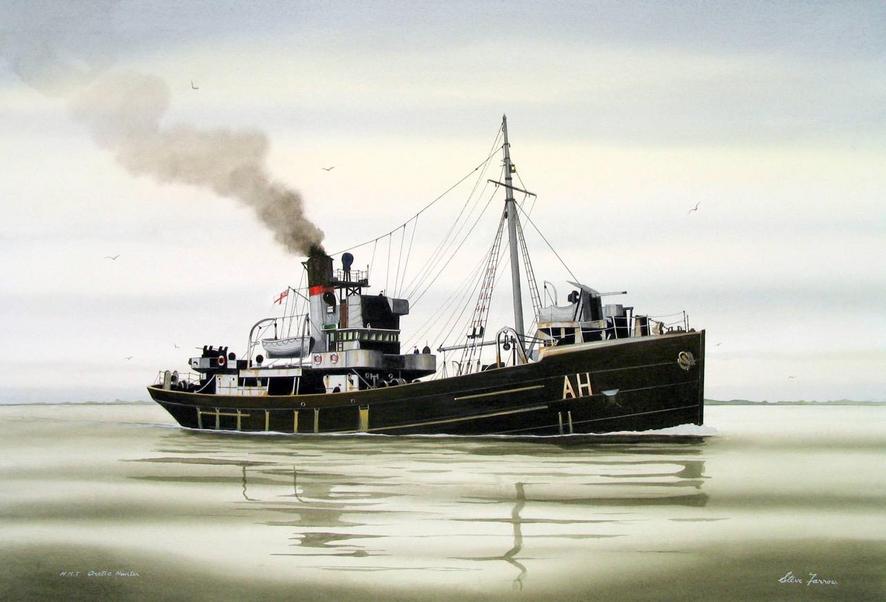 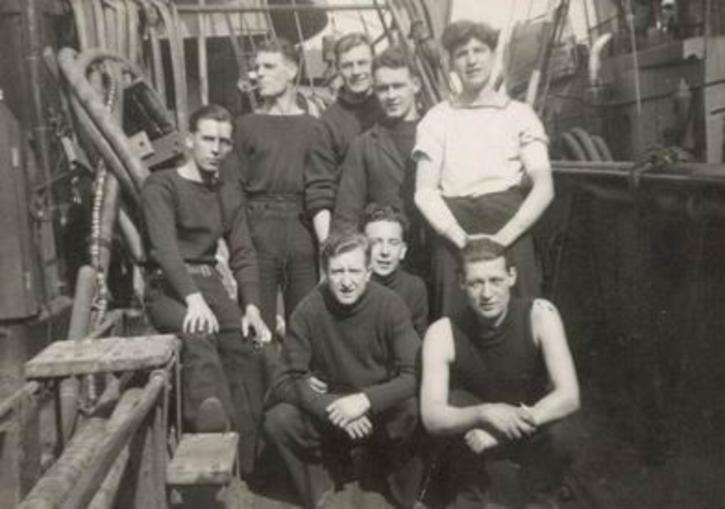 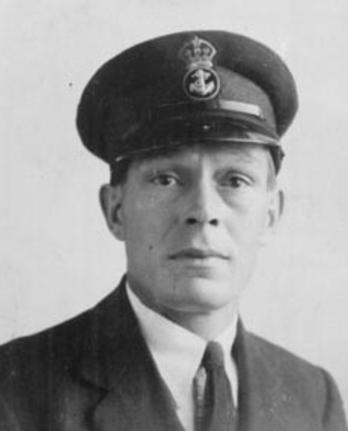 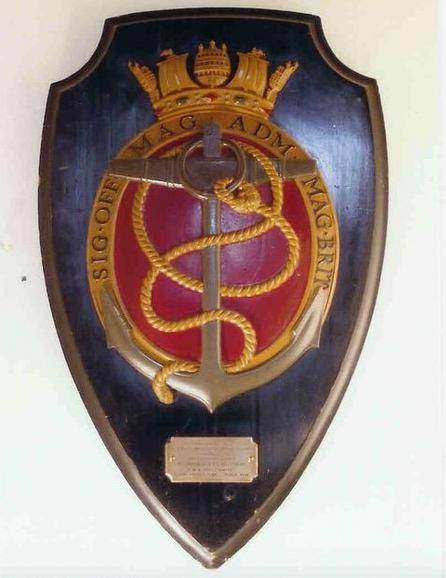 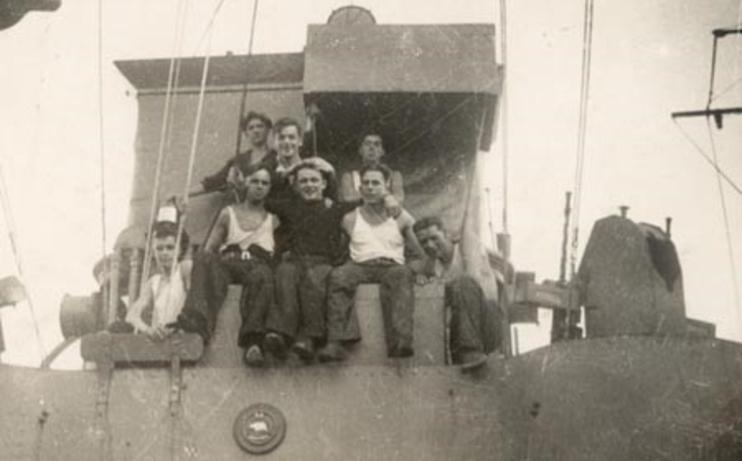 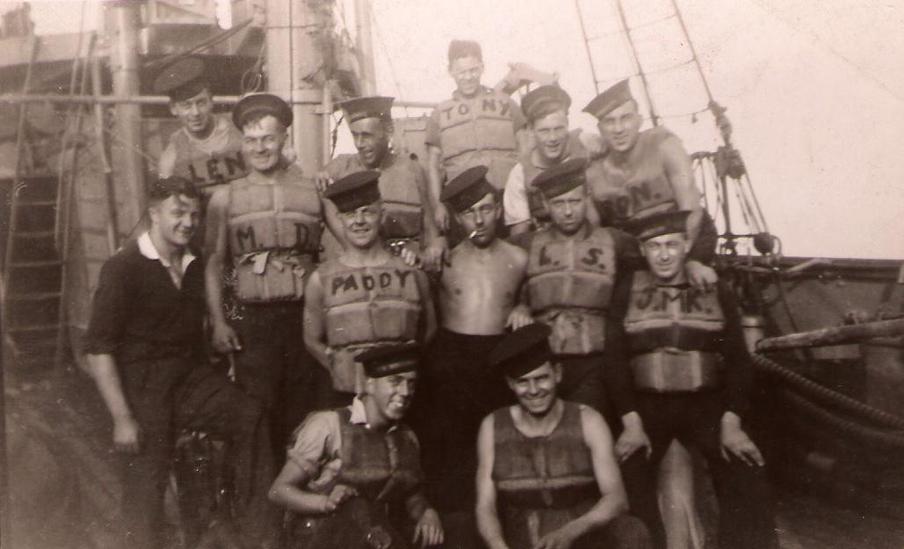 Arctic Hunter crew before November 1942. The sailor wearing the lifejacket marked  J.McK is believed to be John Murdoc McKay who was the only man to die onboard the Arctic Hunter (see below).

The town of Thring in Hertfordshire adopted the Arctic Hunter for Warship week in March 1942 rising £77,113.  The plaque remains on display at the Thring Town Council office. 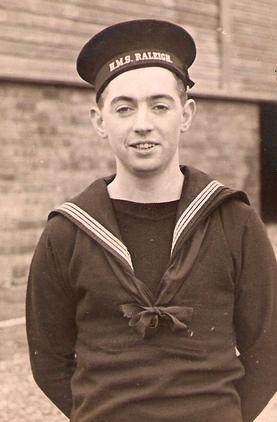 Arctic Hunter survived the war and was scrapped in 1952.

Plaque presented by the Lords Commissioners of the Admiralty to Tring Urban District Council to commemorate the Adoption of HMS Artic Hunter during Warship Week, March 1942.

​​August 1939 the Arctic Hunter was requisitioned by the Admiralty and converted into a minesweeper.  She was fitted with both SA and LL sweeping capabilities. SA is Sweep Acoustic, a device similar to a Kanga Hammer, fitted on the bow, which makes a loud thumping noise which explodes acoustic mine. LL (double L) is a pair of electric cables, fitted on a large cable drum at the stern, which are towed parallel to each other on floats and emit a strong electric pulse which generates a magnetic field to detonated magnetic mines.

The Arctic Hunter was set to work in the clearance of magnetic mines and later acoustic mines from the sea lanes in the Thames Estuary and the North Sea.

Minesweepers moving in straight lines were easy targets for the Luftwaffe and the Arctic Hunter was armed with one 12 pounder naval gun and two machine guns.

During its time as a minesweeper, the Arctic Hunter destroyed over one hundred and ten mines, mainly magnetic and Acoustic, saving many ships and lives.  She also claims a “kill” by shooting down a Dornier 17 bomber, the type used to drop magnetic mines by parachute in the Thames Estuary.

When the Hereward returned they swept a passage clear of mines ahead of the Hereward out into deep water. The passengers on board the Hereward were none other than Queen Wilhemina of Holland and the Dutch Royal Family.

It had been planned for some time that Queen Wilhemina and the Dutch Royal family, in the event of her country being overrun by the enemy, would evacuate to England.

While HMS Hereward proceeded to Harwich with Queen Wilhemina the Arctic Hunter immediately proceeded to Dover. On her passage there she rescued five survivors from the Estonian steamer VIIU off the coast of Belgium.  Fifteen of the Viiu’s crew were lost.

Arctic Hunter was involved in minesweeping the channels clear of mines for the great armada of vessel that crossed and re-crossed the North Sea to and from Dunkirk. She is not mentioned in the Dunkirk lists so probably didn’t transport any troops back from Dunkirk.

30/31 May 1940. On this night during the hours of darkness, Luftwaffe bombers dropped large numbers of mines by parachute around the Dunkirk Evucation beaches. Arctic Hunter would have been busy clearing these mines to make it safe for the evacuation fleet. During this time, she would have been under constant enemy attack from shore batteries and from the air by the Luftwaffe.

6 June 1944. The Arctic Hunter also cleared mines in the sea lanes used by the invasion fleet leading up to and after D-day.

The Arctic Hunter is recorded as being at Sheerness (Wildfire III, Queenborough) on the flowing dates:

In 1942 the Arctic Hunter appears to be based at Grimsby.

Every day for a minesweeper crew was full of danger, so to receive a medal or honour would have required something exceptional on the part of the officers and crew. The men of the Arctic Hunter received no fewer than three awards for their valour.

Lieutenant Walter Edward "Ted" Mercer (25 July 1914 – 17 January 1994) in the New Year Honours List of 1941 received a “Mentioned in Despatches” while serving at Wildfire III, Queenborough on board the minesweeper Arctic Hunter for Minesweeping Duties at Dunkirk.

During a sweep Alf, ‘volunteered' to go over the side into a small boat to release a cable wrapped around a floating mine. A  very brave thing to do! 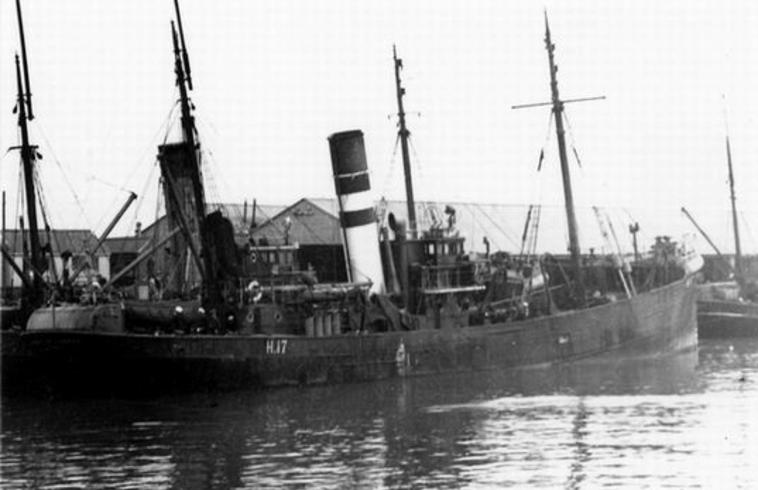 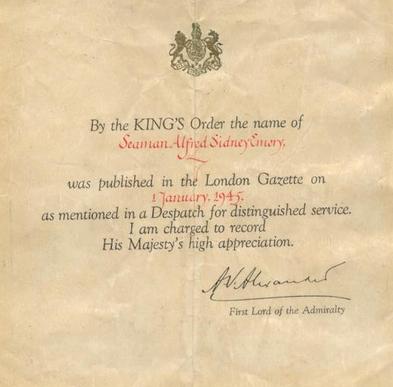 John Murdo McKay died of injuries following an accident in the engine room of the HMT Arctic Hunter. He was taken ashore, however succumbed to his injuries. Buried at his home island of the Isle of Lewis, Scotland. 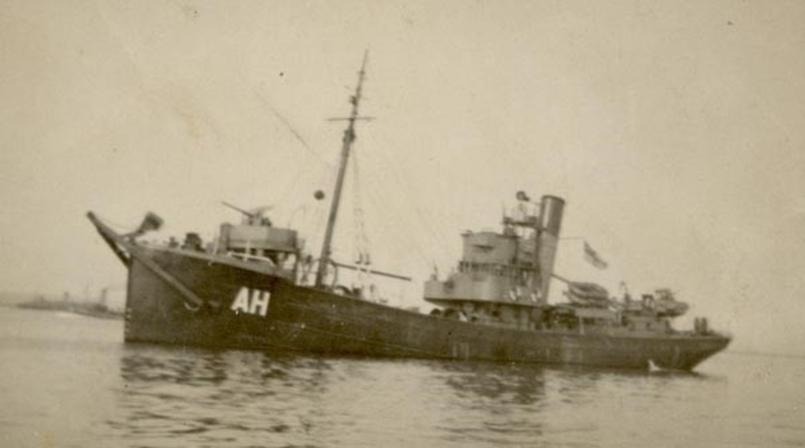 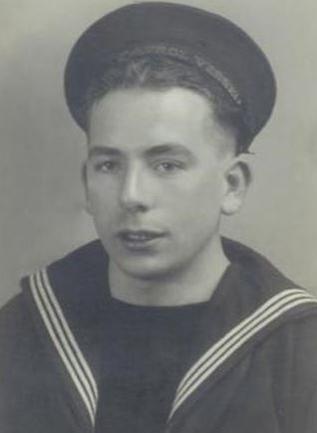 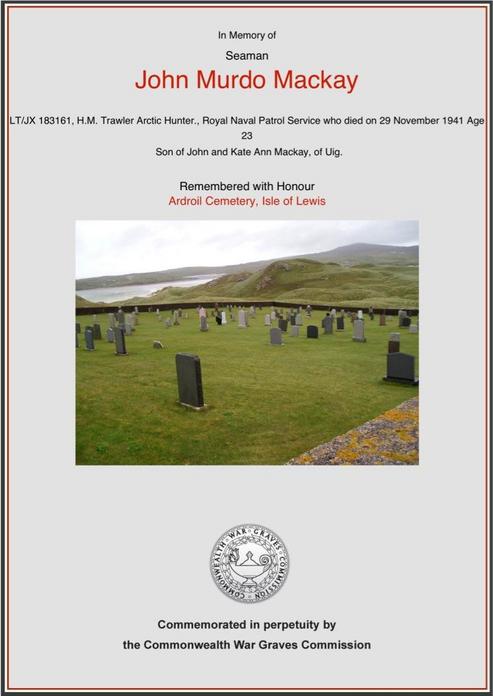 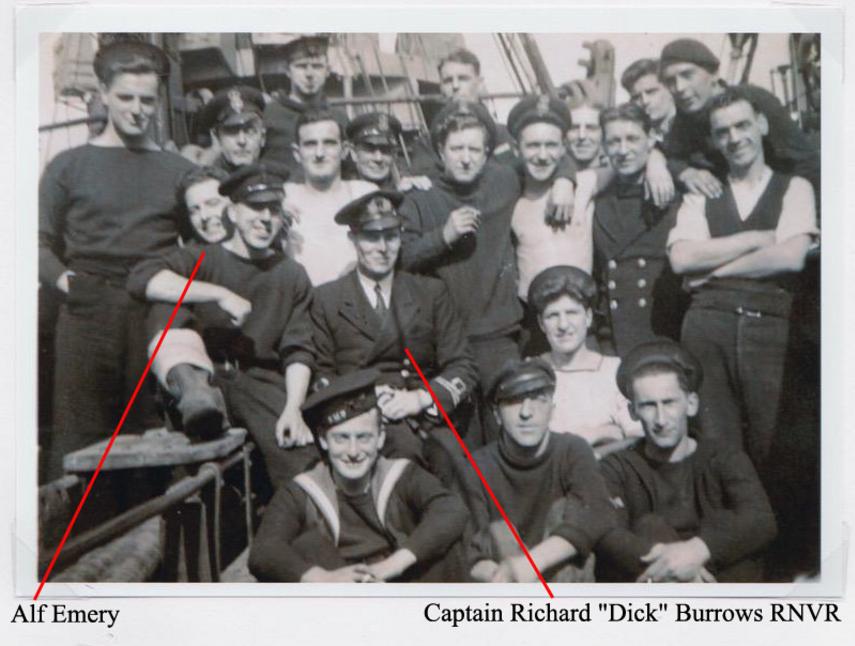 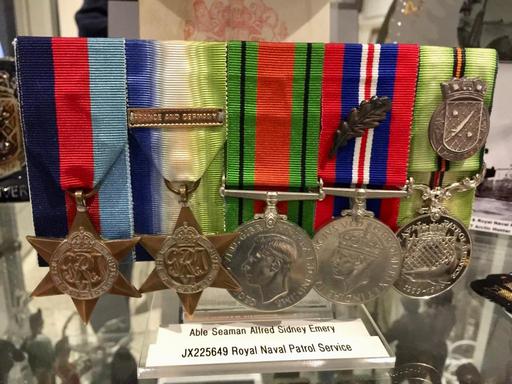 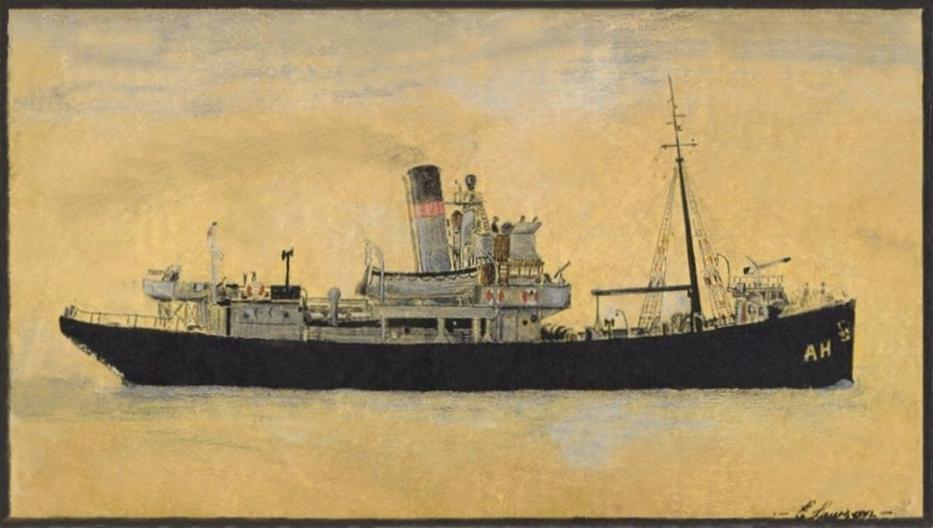 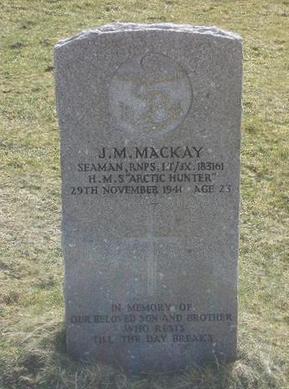 Arctic Hunter. Note the acoustic “Hammer” in the up position on her bow and the gun.
Photos courtesy of Les Emery 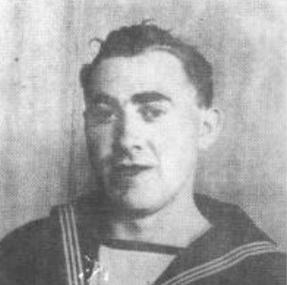 Once again a big thank you to Les Emery for even more Photographs and information. Les's Father, Alf  Emery, served on Artic Hunter during World War Two.

Leonard Alexander Pepino, is the second man from the right in the foreground wearing the white vest. 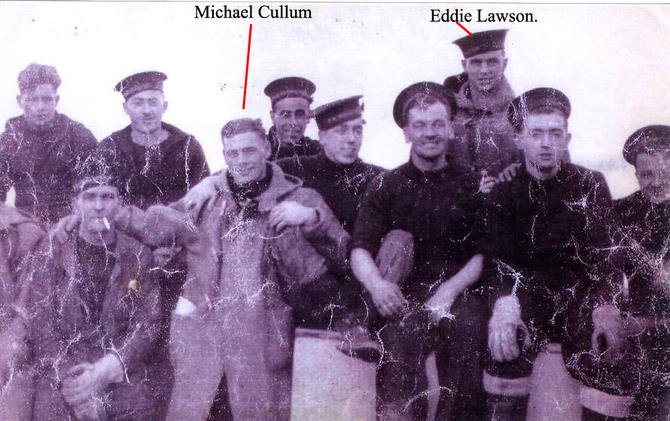