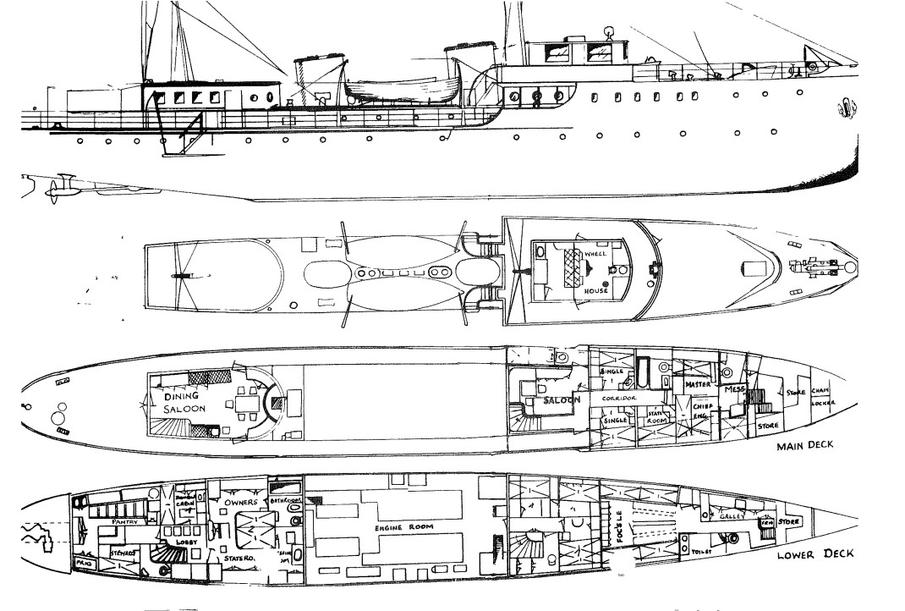 Interior of Aronia when used as a luxury yacht following her service with the Royal Navy.
Photo  and plan below from  Wolfgang Hahn 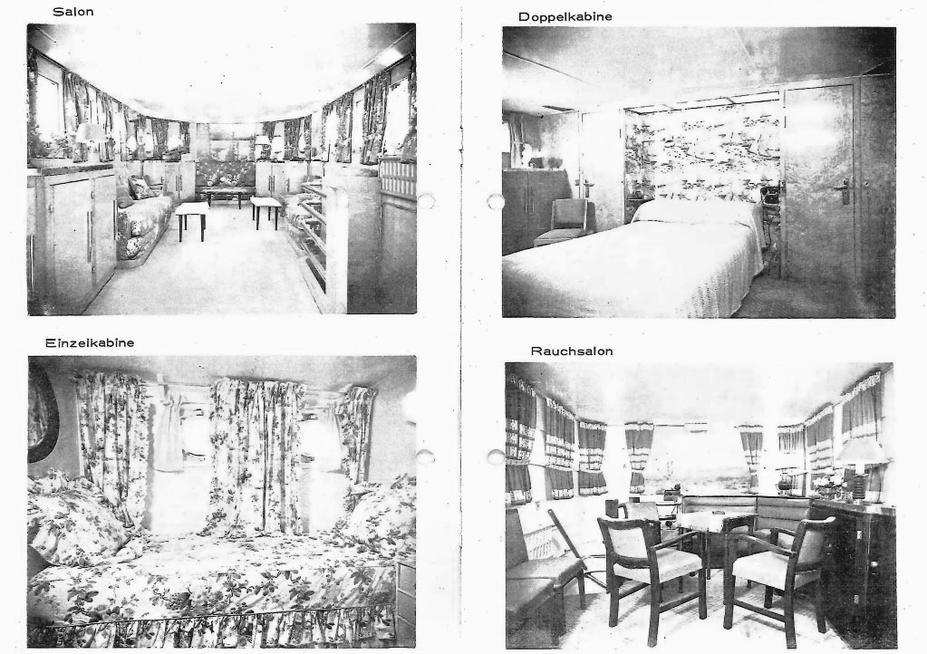 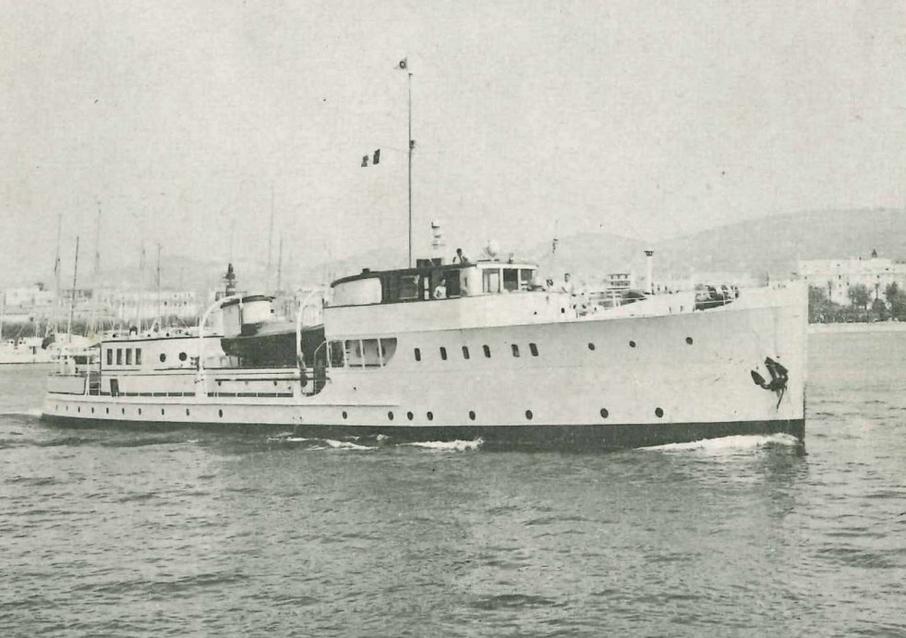 Her Skipper Captain Roe joined her on the 4th November 1939.

Thank you to Wolfgang Hahn for the following information and photographs of the Motor Yacht Aronia.

Wolfgang tells us , “the yacht in 1964  was owned by Karl Erwin Merckle, Wilhelmstrasse 19, Neckarsulm. That year I stayed in Monaco on the yacht.

Translation of Brochure sent to us by Wolfgang

MOTOR YACHT A R O N I A  is the former ship of Winston Churchill with its 1000 horse power  it is the safest private yacht in her class. (The German translation probably means Royal Navy and not Winston Churchill)

The motor yacht "Aronia" is a very luxury ship, which meets the most pampered demands.

The crew, which is housed separately in the foredeck, consists of 5 men (captain, Engineer , Cook , Steward , Sailors )

The Yacht is stationed in the port of Monaco. Passengers can join at any other port on her journey.

The charter price including crew and their meals is 350 US Dollars per day or the equivalent in other currency.
In addition,  7, US dollars per passenger per day for first-class catering (5 meals)  including service and laundry, Also $1.50 per passenger for each hour of the yacht's driving for fuel and Fresh water.

The motor yacht "Aronia" can make the following trips at fixed prices on request:

Her Captain, Temporary Lieutenant John Stanley Roe, was with the Aronia at Dunkirk and received commendations for his courage and actions. These included being Mentioned in Despatches three times and being awarded the Distinguished Service Cross.

HMS Liberty (Algerine Class M/S, now T/Cdr R.N.R) 13 Nov 45 MID. Third MID awarded for devotion to duty and outstanding endurance during mine clearance operations which entailed the working of very long hours in the Elbe and Weser rivers over the period March-June 1945.

Together with other Vessels from Sheerness and Queenborough, the Aronia took part in the Dunkirk Evacuation. Like many other small vessels at Dunkirk, it was not the Aronia’s job to bring Troops back to England. It was the Aronia’s job to pick men up from the beach and take them out to the larger vessels waiting off shore. These larger ships were unable to approach closer because of the extensive expanse of shallow water off Dunkirk.

The Aronia picked troops off the Dunkirk beaches while under constant attack by enemy aircraft and, when the Dunkirk perimeter shrank, by shelling from German land based guns.

The Aronia did take 42 troops back to England when she returned.

Between the fall of Dunkirk on 4 June 1940 and Hitler’s abandonment of Operation Sea lion, the Invasion of England by German forces, on 17 September 1940 the Aronia was on anti-invasion patrol in the English Channel and North Sea, her fast speed enabling her to avoid German Destroyers and E-boats.

After this time the Aronia dropped out of sight. It is probable, but not certain, that the Aronia was on the top secret “Ball bearing run” to Sweden. A post war crew member relates how the Aronia ran the German blockade to Sweden returning with much need ball bearings. He reports that some of the steel around the Aronia’s upper deck had been replaced with armour plating which he was unable to drill through. During repainting prior to sailing he found holes in her around the bow suspiciously like shell damage.

At this time, after the War, she still had her war time engines which were Man B & W Diesels, these being “fun to start up as these were compressed air with cartridge in each cylinder head.”

Small quantities were being flown out of Sweden by the RAF, but this simply was not enough. High speed Motor Gun boats and it is believed the Aronia, under cover of bad weather, poor visibility and a moonless night travelled to Lysenkil, in Sweden returning with cargoes of ball bearings.

A meteorologist was attached to the vessels of the “Ball Bearing Run” to advise on the weather.

Each boat carried a ‘Chief Officer’ who was in fact an SOE (Special Operations Executive) approved liaison officer for this extraordinary enterprise. These blockade runners had civilian crews on board and sailed under the red ensign of the merchant navy.

The most dangerous part of the voyage was passing through the Skagerrak between German occupied Norway and Denmark, where German naval forces constantly patrolled in an attempt to blockade Sweden with its valuable ball bearings from England.

The Aronia survived the war and fell into private hands.