Built in 1917 Ben Glas was a trawler, a sturdy deep sea fishing vessel which fishes with trawl nets (large bag shaped nets dragged along the sea bottom) She was requisitioned and served as a minesweeper in World War One and World War Two. 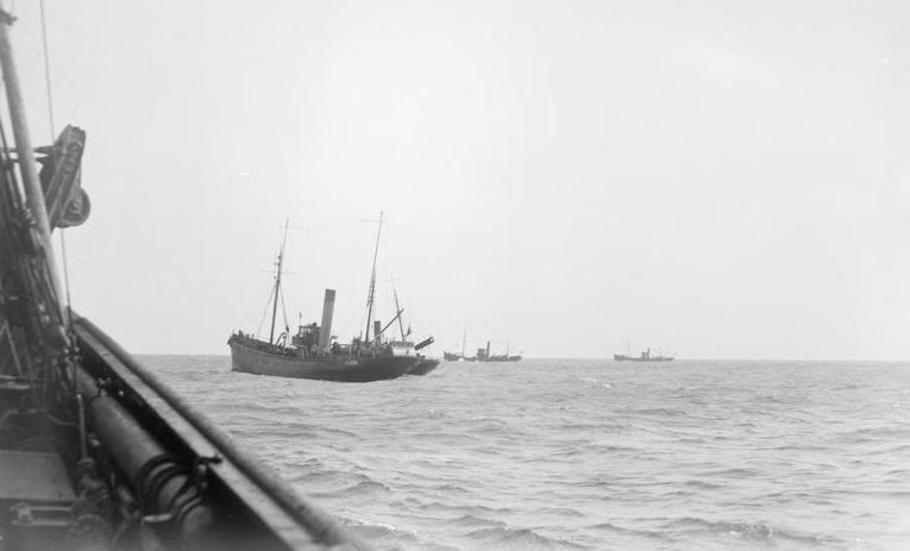 Although we have no photograph of the Ben Glas, she would have looked similar to these British armed trawlers minesweeping in the North Sea.

May 1917. Requisitioned and converted to minesweeper during World War One.

10th Feb 41. The Ben Glas was in collision with the LL Minesweeper drifter “Boy Alan” which sunk off Sheerness.

6 June 1944. The Ben Glas  was off the D-day beaches, she was classed as a “Smoke Making Trawler” signal letters GFXF.

21 Dec.1945, Now a fishing vessel the Ben Glas, 27 miles off, Westray, the Orkney Islands, rescued the crew of the Fishing Vessel Leith. (A389) who had taken to their boats when their vessel sank.

MENTIONED IN DESPATCHES. Lieutenant Commander Norman Wingfield MOTSON, when on the Ben Glas was awarded a Mentioned in Despatches in the King’s Birthday Honours List 1942.

MID. He was again Mentioned in Despatches in the New Year’s Honours List 1943.

MID. Now Lieutenant Commander Norman Wingfield MOTSON having been transferred to the Motor Minesweeper MMS29 received a third Mentioned in Despatches for Operation Neptune, the Navy side of the D-day landings.

MID. He received a forth Mentioned in Despatches, 3 Apr 45, for great gallantry and endurance in clearing the estuary of the Scheldt of mines during the period of September to November 1944.

For more information on what the Arcady was doing and when, CLICK HERE.

Mr Desmond Malbon (86) of Potwell Close, Southwell, was on holiday in Wales when he was approached by a man who noticed he was wearing a blazer with a Navy emblem on.

“I was out for a meal and I’d gone out to have a smoke,” said Mr Malbon.

“He came up to me, said could he see the badge and asked if I was in the Army.

“I said no, I was in the Navy, and I was on minesweepers all round the UK.

“He said his dad was in the Navy on minesweepers too. I asked his dad’s name and he said it was White.”

Mr Malbon realised he had served with the man’s father, Mr Maurice White (84) who was known as Knocker.

Mr Malbon said: “It was a complete surprise. I didn’t expect to go to Wales and meet the son of someone I was on a ship with all those years ago.

“If I was walking down the street and saw Knocker I probably wouldn’t recognise him because we were only boys then and we’ve grown older.

“But because I met his son I’ve had the chance to talk to him again.

“I always wear my blazer. If it hadn’t been for the badge on the blazer none of this would have happened.

“After almost 70 years you don’t really expect to meet anyone you served with again.”

Mr Malbon and Mr White of Mumbles, Wales, were both signalmen and served on the minesweeper, HMS Ben Glas, from 1941.

There were 18 crew members on the vessel, which sailed from the Isle of Sheppey.

Mr Malbon said: “We used to go out to the pub together when we had time.

“We were friends although we called them comrades then and we used to go out when we were ashore, although not very often because we didn’t really have enough money.”

After the war Mr Malbon was a publican before working at the Boots research centre at Thurgarton. Mr White remained in the Navy.

Mr Malbon contacted Mr White for the first time on Wednesday and plans to visit him.

He said: “I’m going to ring him again soon and have a long chat. I’m going to try to arrange to go and visit.”

Mr Malbon is a member of the Bleasby branch of the Royal British Legion.