The Bernard Shaw was a fishing Trawler which was requisitioned by the Admiralty and converted to an Armed Minesweeper. Initially she was fitted with Oropesa sweeps, sweeping for tethered mines.

The German’s began to use magnetic mines which were laid by surface craft, but mainly dropped by parachutes  from aircraft.

Magnetic Mines caused considerable losses of shipping in the Thames Estuary and on the East Coast. The British were struggling to devise counter-measures to the magnetic mine, but a breakthrough came on the 23 Nov 1939. German aircraft were seen laying mines in the Thames Estuary. One of these was seen to land in shallow water off Shoeburyness, in the Thames Estuary, where at low tide it was disarmed and removed for examination.

The Bernard Shaw took part in experimental minesweeping from which the successful “anti-magnet Mine” LL (double L) was developed. LL is a pair of electric cables which are towed parallel to each other on floats and emit a strong electric pulse which generates a magnetic field which detonates  magnetic mines.

Early in 1941, the Bernard Shaw was sweeping the Barrow Deep in the Thames Estuary. It was night time and newly promoted Skipper R.N.R., William Thorpe was on the bridge. It had was raining heavily and the gun crew had been told to shelter under the whaleback.

As the Bernard Shaw approached number four Barrow buoy, a plane was heard overhead. As they searched the sky for what was thought to be an enemy aircraft, they saw a parachute. Hanging beneath it was a deadly magnetic ground mine.

Skipper William Thorpe first sighted it just under the starboard crosstree. He ordered, “hard-a-port”. The mine struck the ship, slid over the foredeck and fell into the sea. Three more feet to port and the Bernard Shaw and her crew would have been blown to pieces. It was a very lucky escape indeed!

May/June 1940. The Bernard Shaw would have been sweeping the sea lanes to Dunkirk .

SUPPLEMENT TO THE LONDON GAZETTE, 1 JANUARY, 1940
Admiralty, 1st--January, 1940. The KING' has been graciously pleased to give orders for the following Appointment to the Distinguished Service Order.

The above Appointment and Awards are for, unfailing courage, endurance and resource in H.M. Trawlers, Drifters and Minesweepers in their hard arid perilous task of sweeping the seas clear of enemy mines, and combating submarines.

ADMIRALTY, Whitehall, 8th June, 1944. The KING has been graciously pleased, on the occasion of the Celebration of His Majesty’s Birthday, to approve the following awards for gallantry or outstanding service in the face of the enemy, or for zeal, patience and cheerfulness in dangerous waters, and for setting an example of wholehearted devotion to duty, upholding the high tradition of the Royal Navy:

I volunteered for the navy at the recruiting office in Wrexham. After completing our class was sent to various depots. I went to HMS Wildfire at Sheerness. Soon I was transferred to HMS St. Tudno moored in the Medway at Queenborough. This was the depot ship for the Nore minesweeping division. I was drafted to HMT Bernard Shaw, an ex-fishing trawler fitted with Oropesa sweeps. We only swept at night due to air raids. Down the channel to the north foreland where we met sweepers based at Dover. Then back to base before dawn. This was the time that the Germans started to use magnetic mines and so we were sent to Brightlingsea to tow two experimental barges that carried electrical equipment to set off the mines. These obviously proved successful as it led to the fitting out of a lot of trawlers with 'Tails'. Then came acoustic mines, so we were fitted with a 'bucket' fitted over the bow. This rattled and set them off hopefully far enough ahead not to do the ship any harm.

For more of Jim’s story, go to http://www.harry-tates.org.uk/veteranstales3.htm 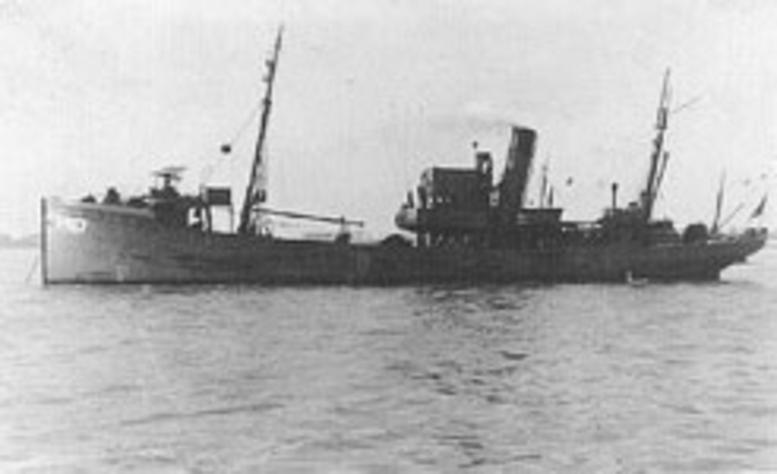