1914.  Requisitioned for Naval Service and used as a net vessel.

6 December 1929.  The Boy Alan and the Lord Suffolk  stood by the disabled  Spanish steamer in the North Sea, in a gale, until tugs arrived from Hull.

July 1935.  Fouled propeller with nets off Lerwick and towed in by Constant Friend LT 1172.

November 1938.   In collision with Scottish vessel the COSMEA.

10 February 1941. The Boy Alan was in a collision in the Thames Estuary and sunk.

To find out more of the Boy Alan's movements go to DRIFTERS AND TRAWLERS.

The Boy Alan collided with another vessel while returning through the Yatlet gate in the anti-submarine Boom across the Thames Estuary. The Yatlet channel was the busiest waterway in the world leading to the largest port in the World. At that time the Port of London had 36 miles of deep water quays with over two hundred ships docked at any one time.

Navigation aids were few and far between and being under constant attack by the enemy lights on shipping were few and dim. In addition to the merchant shipping, arriving and departing in huge convoys all passing through the bottle neck of the Yatlet Boom Gate, there were minesweepers, barrage balloon vessels, boom vessels, anti-aircraft vessels and war ships of every kind. In this confusion of shipping, navigating through narrow channels, with new hazards such as recently sunken ships, collisions were inevitable.

There were no casualties recorded on the 10 February 1941 and it is thought the crew of the Boy Alan were all safe, possibly rescued by the very vessel which collided with them. 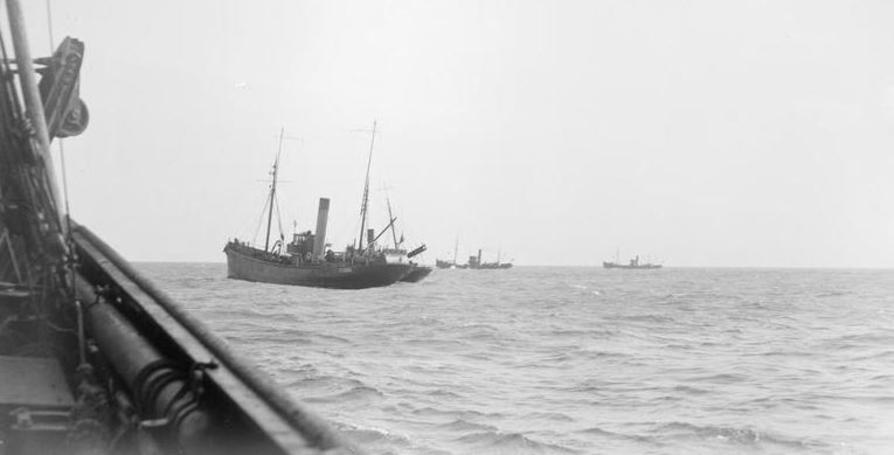 The Boy Alen would have looked like these Minesweepers sweeping in the North Sea.