​At D-day, BYMS 2002 swept in the Destroyer HMS Grenville and continued sweeping to within half a mile of the shore by which time it became too shallow. Shells were falling all around with several exploding between her and her Oropesa floats. BYMS 2003 also experienced several near misses astern. 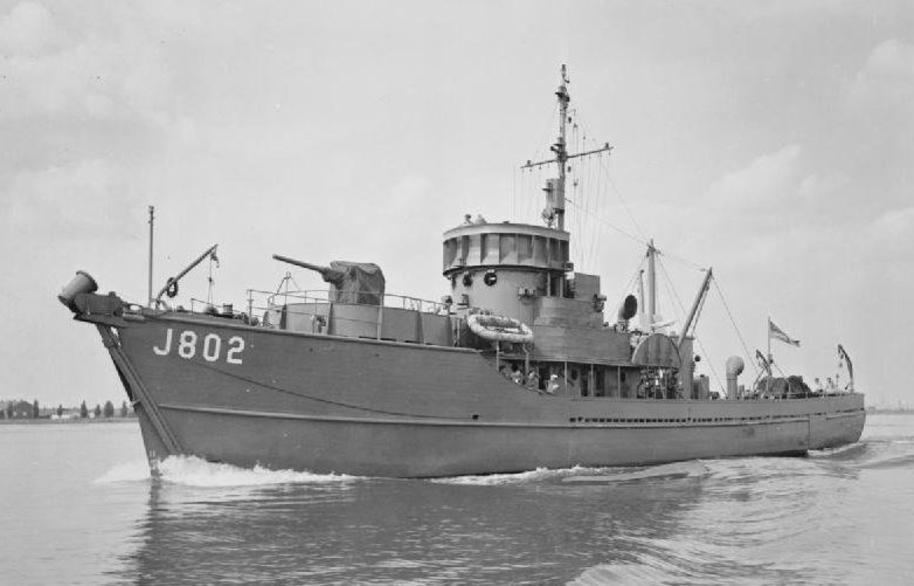 22 June 42. Completed.
28 Oct 42. Halifax Canada.
4 Feb 43. St John’s, Newfoundland. Crossed Atlantic Ocean from Canada to the U.K.
12 Feb to 16 Feb 43 Londonderry.
17 Feb 43. Holyhead.
18 Feb 43 Milford Haven.
3 July 43 Portsmouth.
June 6th, D-Day BYMS 2002 was sweeping off Gold Beach.
During the period from the 4 June 1944 (the day before D-day) to the end of July 1944 BYMS would have cleared pathways through the minefields to the Normandy Beachheads, cleared mines ahead of the Invasion Convoys, cleared mines from the ship assembly and disembarkation areas almost right up to the beaches, widened the cleared pathways and continuously swept for newly laid mines.
1 Sep to 8 Sep 1944 Newhaven.
During November 1944, clearing the Scheldt of mines, the most crucial minesweeping event of WW2.
7 Dec 1944 Portsmouth.
12 May 45 Great Yarmouth.
13 May 45 Rosyth.
Feb to Sep 46. Dover.

Sep 46 to June 47 Sheerness. Laid up at Queenborough Pier, Wildfire III, Queenborough after WW2 waiting to be returned to the United States Navy or sold.