Putting out board the towed box S. A. Gear (Sound Acustic) for sonar mines.

Crews for the BYMS’s would sail to the United States, often on the Queen Mary, which could sail unescorted because of her greater speed, to collect their vessel. They would then have the formidable task of sailing their small vessel back across the Atlantic Ocean, often in winter. ​​​​

​​If you, your father or your grandfather have any additional information about this ship, crew lists, stories, photographs, please send copies of them to be added to our records and this website. 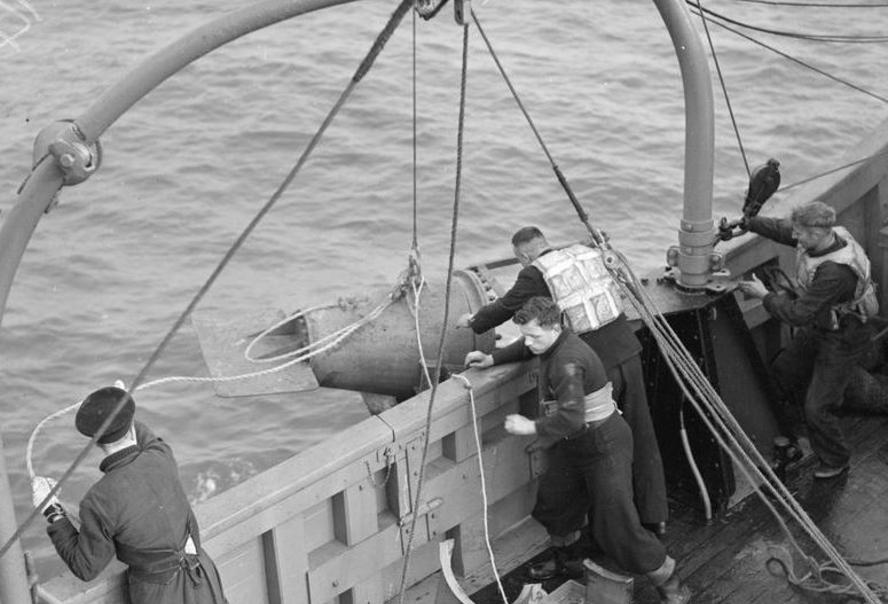 In 1943 Tom boarded the liner Queen Mary which took him to America. On the same ship was none other than Winston Churchill on his way to the United States to meet President Roosevelt.

The Queen Mary was a fast ship and as such could travel unescorted and not in convoy. To avoid U-boats she travelled at top speed and on a zig-zag course. Coming off the 12-4 a.m. watch Tom came across Winston Churchill on the promenade deck. Winston nodded and Tom nodded back.

Tom was on board the BYMS 2041 when she travelled back across the Atlantic Ocean from the U.S.A. to England.

June 6 1944, D-Day. Tom was on board BYMS 2041 off the Normandy beaches clearing the anchorage of mines. “Dawn came very slowly. This was the big one. What an amazing sight. To port, to starboard and astern an astonishing flotilla of ships of all shapes and sizes. What happened during the coming days is very hard for me to describe?

“We were minesweeping off the Sword Beach. Hunt class destroyers were bombarding the German gun emplacements. Shells from the battleship HMS Warspite further offshore whistled overhead. The noise was deafening. Scores of landing craft carrying thousands of very, very brave men headed towards the beaches. Some, as we know, paid the ultimate sacrifice for their king and country and, of course, our enduring freedom.”

Shortly after BYMS 2041 embarked with other ships on one of the most arduous and dangerous minesweeping operations of the war – clearing mines from 80 miles of the River Scheldt to open up the port of Antwerp, in Belgium.

MENTIONES IN DISPATCHES. A MID was awarded to Thomas​ ELLIS, Signalman, D/JX269300 while serving on BYMS 2041 for great gallantry and endurance in clearing the estuary of the Scheldt of mines during the period of October to November 1944.