Ronnie, now 96 years old, recalls how he went to the USA to take possession of the British Yard Minesweeper from Haywoods Shipyard, Crosby, New York. He can even remember it was moored at Pier 304.

The crew and Skipper of the BYMS 2078, Ambrose "Hammy" Fisher a Yorkshire man from Grimsby, now had the daunting task of sailing their small vessel back across the Atlantic Ocean with winter fast approaching through an Ocean infested with enemy U-boats (submarines).

Ronnie told us that the operation of detonating mines was to trawl out steel cables which would contact the mine support cable then a device called a "sharks mouth" would be employed to cut through this cable, the mine would then float to the surface and the ship's crew would fire at the mine detonator "spikes" to explode it.

Ronnie was on board at D-day when BYMS 2078 cleared the path for the Allied fleet and once the ships were in position cleared right up the beaches until the sea became too shallow. It would have been Ronnie’s job, who set the gun's sights for targets, to train his gun on the enemy and  give supporting fire to the troops landing on the beaches. Being closers to the beach than all other ships, other than landing craft,  would have attracted heavy fire from enemy shore guns.  It was also the practise of enemy shore batteries to return fire at anything which targeted them. With shells landing all around sending huge columns of water into air and with several of the minesweepers being hit, although not sunk, it would have been a very unpleasant place to be. Nevertheless the minesweeper, disregarding enemy fire, continued sweeping.

BMYS 2078 cleared mines from Cherbourg Approaches (shortly after D-day) while it was still in the hands of the enemy, with its many shore gun batteries still active and armed trawlers and E-boats (Enemy fast torpedo boats) making continuous sorties. The Captain of Ronnies Minesweeper Skipper Ambrose Fisher (Hammy to Ronnie) was awarded a MID (Mentioned in Despatches) for the dangerous work undertaken by BMYS 2078 off Cherburg.

Ronnie was on BMYS 2078 when the minesweepers cleared the Scheldt Estuary. This was certainly the most important event of WW2. Today a largely forgotten battle, there were more Allied casualties at the Battle of the Scheldt than on D-Day. None other than General Dwight D. Eisenhower Supreme Commander ordered that clearing the mines from the Scheldt Estuary was to take priority over all other engagements. This was because with supply lines stretching all the way back to the Mulberry Harbours on the D-day Beaches, the Allied advance had come to a halt. A port, this being Antwerp, was badly needed. Even before the fighting on the banks of the Scheldt Estuary ceased, minesweeper slipped in to start clearing mines. A number of the BMYS (British Yard Mine Sweepers) were hit by shells from shore batteries with casualties.

The danger for the crew of the BMYS 2078 did not cease until they reached the Elbe River and cleared  the mines to open up the German Port of Hamburg. Germany was a shattered country and her people close to starving. Even though they were the enemy, the actions of the minesweepers allowed humanitarian aid to reach Hamburg and Northern Germany. A British sailor’s description of Hamburg at that time was, “There wasn’t one brick standing on top of another!”

Ronnie also recalls a friend, John Gregson, also on minesweepers and HMS Goodwin, a convoy escort vessel. After the War John Gregson was to become a very famous British Actor who’s movies include (amongst many others) Genevieve (1953), Above Us the Waves (1955), The Battle of the River Plate (1956) and The Longest Day (1962).​​ 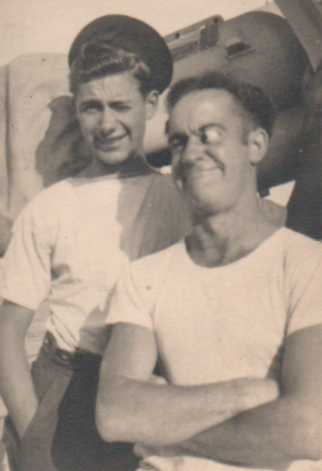 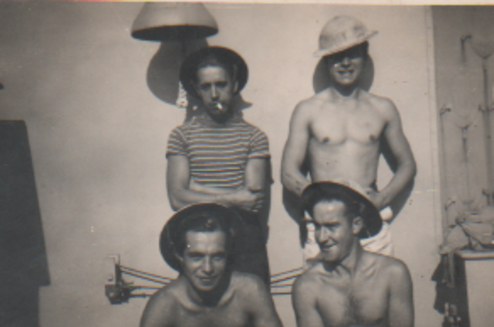 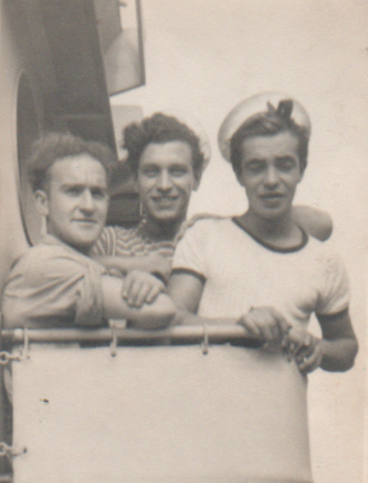 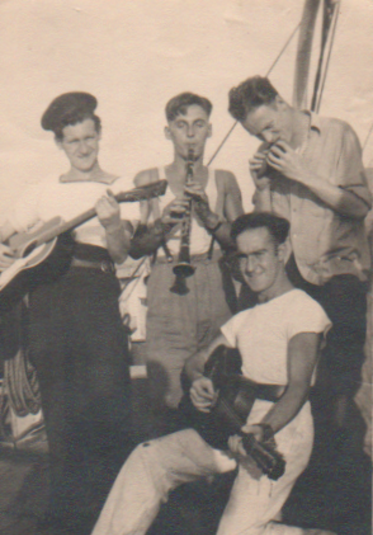 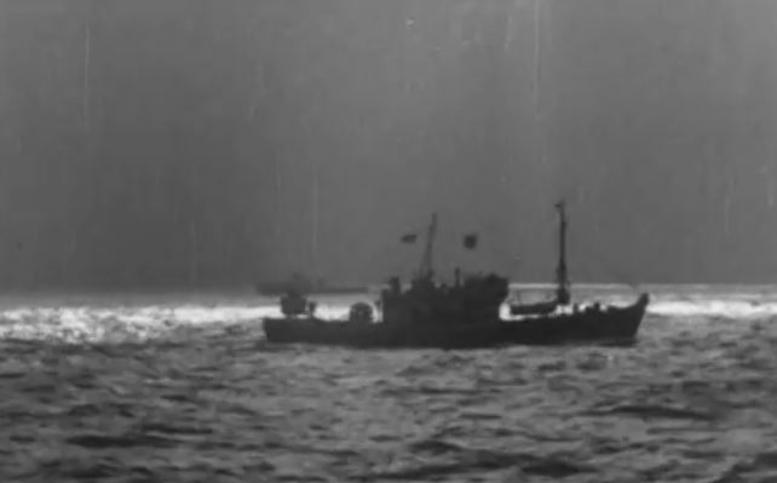 Ronnie Heyes (front left) with distinctive round ports of  a BYMS  lower bridge behind.

Actor John Gregson, Ronnie know him when he too was in the Navy serving on Minesweepers and  escort vessels. 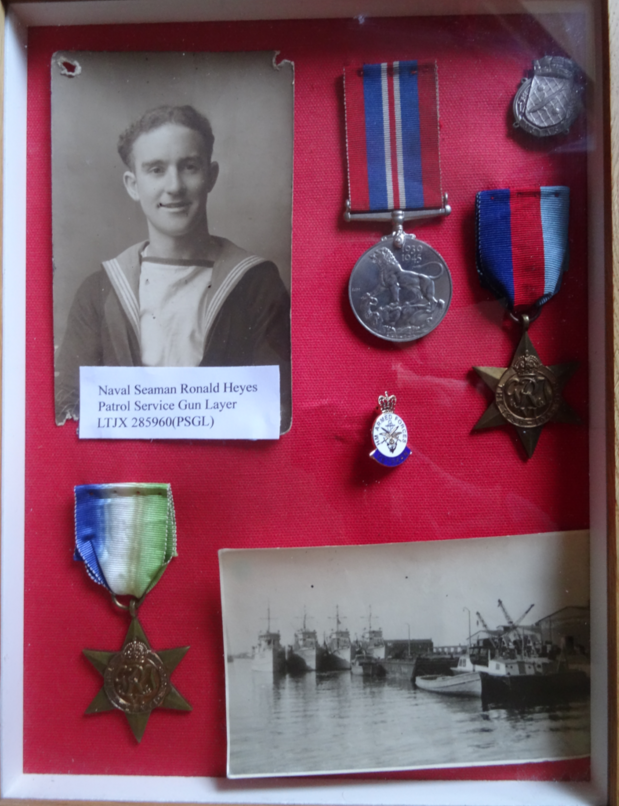 Many thanks to  Ronnie Hayes (Junior) who sent these photographs of his Dad, now aged 96 (in 2016) on board the British Yard Mine Sweeper 2078.

Framed photographs, medals and even a Minesweeping badge from Ronnie senior's room. 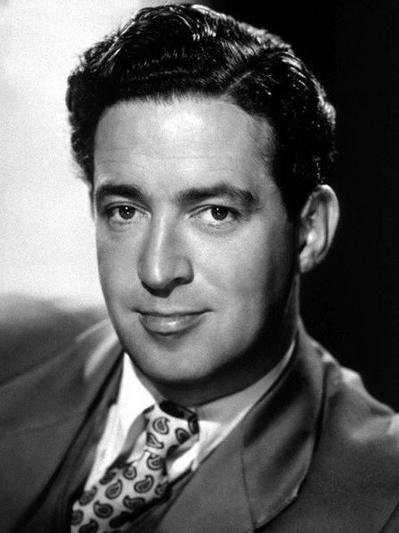 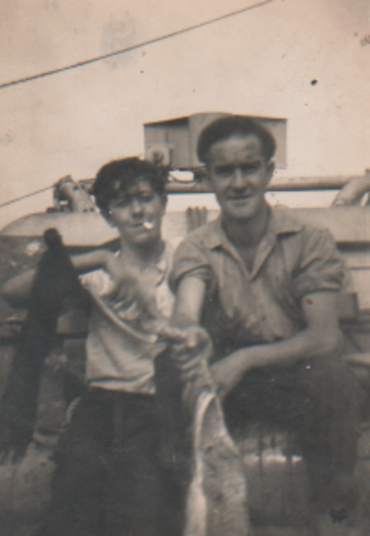 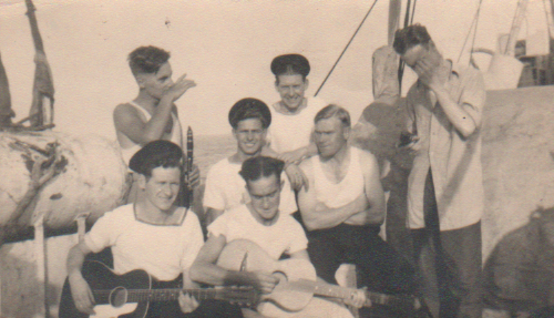 Ronnie Heyes (Left) and ship mate on board BMYS 2079

BYMS 2078 sweeping Antwerp. British Yard Mine Sweepers were fitted with an Acoustic “hammer” on the bow to sweep for acoustic mines and a drum on the stern for the LL cables to sweep magnetic mines. 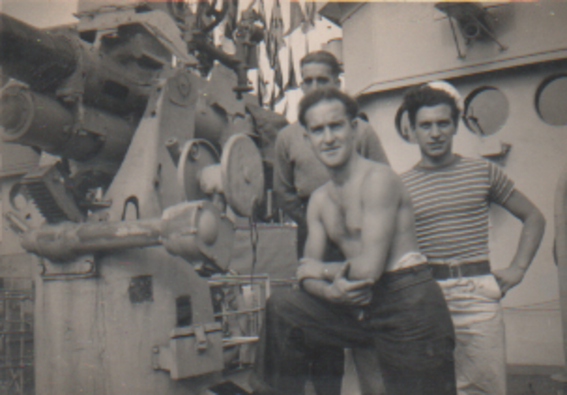 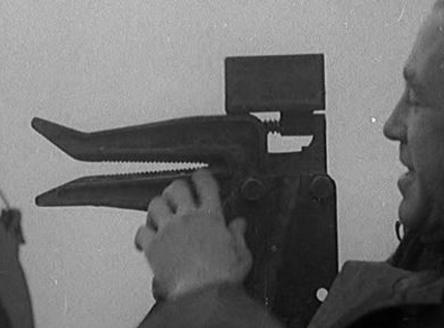 MEDTIONED IN DESPATCHES. A MID was awarded to Ambrose Ernest FISHER, Skipper R.N.R.

BYMS 2078, Third MID awarded for gallantry and skill in minesweeping operations off the coast of France. Cherbourg Approaches. 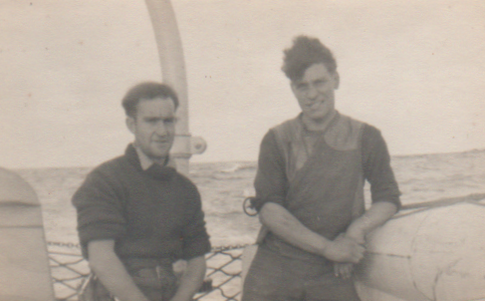 Daily life on board BYMS 2079 goes on normally, but with the ever present danger of detonating a mine.

The cutter called a "Sharks Mouth" as told by Ronnie

Sun gets in your eyes. 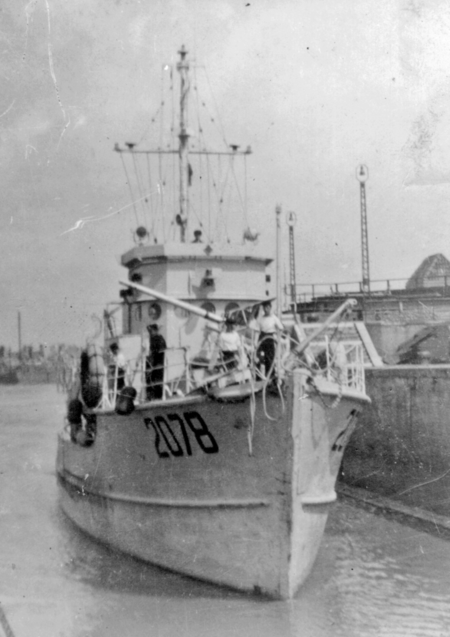 It would not be an exaggeration to say the men in the above photographs changed the course of World War Two. They kept the sea lanes open allowing the build-up of war supplies in the South East of England for the successful invasion of Europe by the Allies. They cleared the Scheldt Estuary of mines and opened up the Port of Antwerp and by so doing shortened the war. They opened up the Dutch Ports allowing ships carrying humanitarian aid to be delivered to a Dutch population who were starving to death and by so doing saving many thousands of lives.

BYMS 2079's gun (the one pictured above) was used to give supporting fire to the troops landing on D-day when she and her sister minesweepers led the Allied Invasion Fleet to the Normandy Beaches. The Minesweeper went closer to the beaches than any other vessels apart for the landing craft. With shells falling between the vessels and their sweeping gear they continued to sweep up to the beaches until the sea got too shallow to do so. 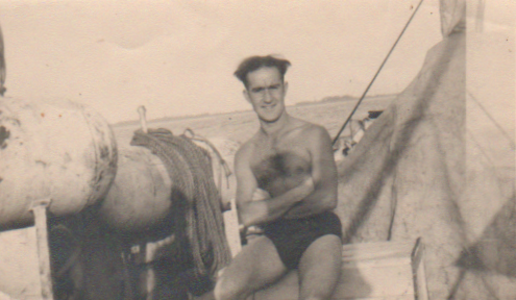