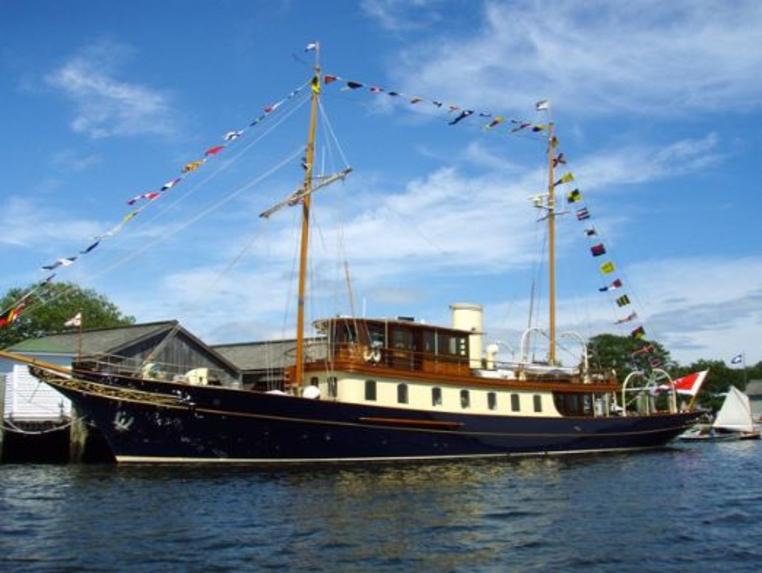 Jennifer Jones, starring in Tender is the Night in 1962 on board the Caleta which had been renamed the Corisande.

In 1998 she was acquired by Thomas Perkins of San Francisco and  underwent a total rebuild.

June and Aug ship listed but no officers.
Dec. 42

Atlantide, formally Caleta, after extensive re-build, of the “Little Ships of Dunkirk” fame.

The Caleta’s name has been changed to Atlantide and she still exists today.

The Corisande, formally Caleta, on the French Riviera, in the 1962 film, Tender is the Night.

1939. The Caleta was requisitioned by the Admiralty and based at Sheerness as a Harbour Defense Vessel. She was armed with guns and patrolled the Thames Estuary.

Although Britain had the biggest Navy in the World at the outbreak of World War Two it was not big enough. While the British Navy had to protect every convoy and every port, the German Navy could attack in force anywhere at any time. Ships and vessels of every kind were pressed into service. Their type and design dictating their role. Glala was chosen to work with the Extended Defense Flotilla.

31 May 40. On arrival at Dunkirk the Caleta worked off the beaches east of Dunkirk lifting men directly off the beach and taking them out to larger vessels. She also towed smaller ships boats from the beach to larger ships standing by in deeper water. This was made easier when at several places the troops on the beaches drove vehicles into the sea at low tide making improvised jetties.

With smoke billowing up from the shore and half submerged vessel everywhere the Caleta laboured away diligently as shells fell from shore batteries and dive-bombers attacked.

1 June 40. The Caleta continued taking troops to larger vessels and also took off 35 troops from the disabled Landing Craft ALC5. On her return to Sheerness she took this vessel in tow. Twice the tow line broke but she arrived safely at Sheerness late on the 1st June 1940 to land rescued troops.

Caleta was built for Sir William Burton KBE, a distinguished yachtsman and designed by the English Naval Architect Alfred Mylne the designer of the original Royal Yacht Britannia.

After the war she was bought by a Greek ship owner who changed her name to Ariane. Later she was renamed Corisande and based in Antibes near Cannes in France.  She was used in the 1962 film “Tender is the Night” starring Jennifer Jones, Jason Robarts and Joan Fontaine.