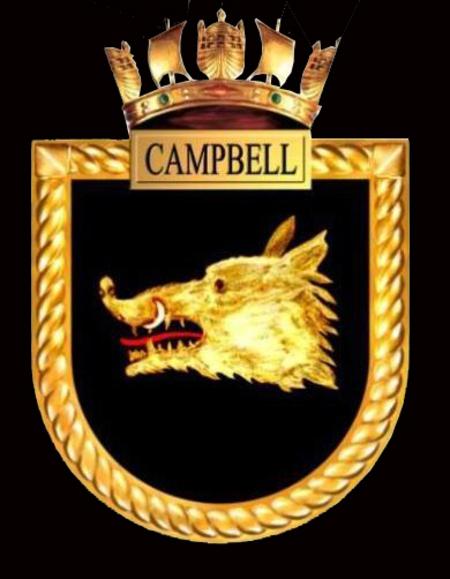 A World War One Destroyer HMS Campbell is Scott-Class Flotilla Leader. It was laid down on I0th November 1917 and launched on 21st September 1918.  The Campbell served in the Atlantic Fleet until 1925 placed into Reserve and returned to service in 1939. She was adopted by the community of Caithness in Scotland in May 1942.

Badge: On a Field Black, a boar's head Gold, languid and armed Silver.

​Scott-Class Flotilla Leaders were enlarged to carry additional crew, offices and signaling equipment and to allow a fifth gun to be carried.

25 March 40. Escort duties with Convoy OG23 on passage to Gibraltar. Convoy OG23 was a large convoy of 51 merchant ships and 8 escorts.

April-June 40. Detached to support operations off Norway, the Norwegian Campaign.

22 April 40.  Sailed from Rosyth with 60 troops and stores for landings at Molde and Andalsnes situated on the Hardangerfjord 140 miles SSW of Oslo.

July to October.Convoy defence duty and anti-invasion patrols. Destroyers from the Nore Command including from Sheerness Campbell, Garth, Vesper, Holderness and Venetia patrolled the French coast attacking vessels that were building up for the planned German Invasion of England.

19 Nov 40.  In action with E-Boats off Southwold, Suffolk where Sheerness Destroyer HMS Campbell rammed and sank E-Boat S23, a Type 1939/40 Schnellboot. Nineteen of the crew were rescued and became prisoners of war. This was the first E-boat to be sunk by the Royal Navy.

While escorting Convoy FS50 (FS650) departing Methil on 18 Nov 1941, arriving at Southend on the 20 Nov 1941, consisting of upwards of fifty ships it came under attack by e-boats. The SS Aruba and SS Waldinge were sunk by Schnellboote S41 and S105. The tanker War Mehtar at 5,502 tons was torpedoed and sunk by the S104 (Captain Rebensburg.) The Convoy was escorted by the Vesper, Verdun, Wolsey, Campbell, Garth, Hambledon, Quorm, Kittiwake and Widgeon.

Vesper and Garth were close to the War Mehtar when she was attacked near buoy 56 and went in pursuit of three e-boats. During the battle, in the darkness HMS Garth was damaged by gun fire from HMS Campbell.

The S41 was sunk in a collision with S105. In all three merchant ships and three e-boats were sunk.

12 Feb 1942.   While taking part in Flotilla exercises with Vivacious of 21st Destroyer Flotilla (Sheerness) and Mackay, Worcester Whitshed and Walpole of 16th Destroyer Flotilla (Harwich), and seven Hunt class destroyers which were on standby, were ordered to intercept the German Battle Fleet consisting of the SCHARNHORST, GNEISENAU and PRINZ EUGEN with supporting, Destroyers, e-boats and aircraft.

Under heavy fire from ships and planes the Destroyer flotilla (from Sheerness and Harwich) attacked the German Battle fleet and fired torpedoes without success. The Worchester was hit seven times by enemy shells and stopped dead in the water with 26 of her crew killed and 45 injured.

2 Aug 1942.  Escorted Convoy PQ18 from Loch Ewe to Russia. Convoy PQ18 departed from Loch Ewe in Scotland on the 2 September 1942 and arrived at Archangel in Russia on the 21 September 1942. It was a massive convoy of 48 merchant ships and a formidable 74 escorts vessels.  Even so 13 merchant ships and one Royal Navy ship was sunk. Three U-boats were destroyed and 40 German aircraft were shot down.

The Convoy losses were; the Africander (Panama). Empire Beaumont (British). Empire Stevenson (British) John Penn II (US)  these were sunk by aircraft.  The Atheltemplar (British) was torpedoed by U475 with the loss of three of her 61 crew. The Kentucky (US), Macbeth (Panama), Mary Luckenbach (US) her cargo of 1,000 tons of TNT exploded. All 24 Gunners and 41 crewmen were killed. Oliver Ellsworth (US). Oregonian (US). Stalingrad (Russian) with the loss of 21 of her 88 crew. Sukhona (Russian) and Virginia Dare (US) were all sunk.

HMS Somali was torpedoed and was taken in tow but broke her back with the loss of 67 of the 105 crew and passengers on board.

The losses were great but the Artic Convoy route which had effectively been closed since the disastrous Convoy PQ17 had been reopened.

29 Nov. 1942. HMS Campbell was in action against E-Boats with HMS Garth in which the German Schnellboote S38 was shelled and sunk.

24 Oct 1943. While escorting Convoy FN1160 with Pytchley, Wochester, Eglinton and Mackay was in action against E-Boats attacking convoy.

May 1944. Designated for duty with Force S for the D-Day Allied landings in Normandy. Selected to escort convoys from the Thames Estuary to beach head area as Escort Group 113 with HMS Vivacious.

4 June 1944.  Escorted convoy to Spithead in preparation for D-Day landings. D-Day delayed  for 24 hours due to bad weather.

The minesweepers had left with the advance units on the 4th June, but with the weather deteriorating they were recalled. Having to keep radio silence they did not respond. The admiralty was concerned that all ships had not received the recall.

The 14th Mining Flotilla had come across an unknown minefield in the path of the D-day convoys so did not return but stayed to clear it.

The Campbell thinking the mining Flotilla had not got the message closed on the minesweepers to send a signal by semaphore to find themselves surrounded by floating mines which had just been cut!

July. After release from NEPTUNE resumed convoy escort duties in the North Sea.

HMS Campbell was sold for breaking up on the 18 February 1947.