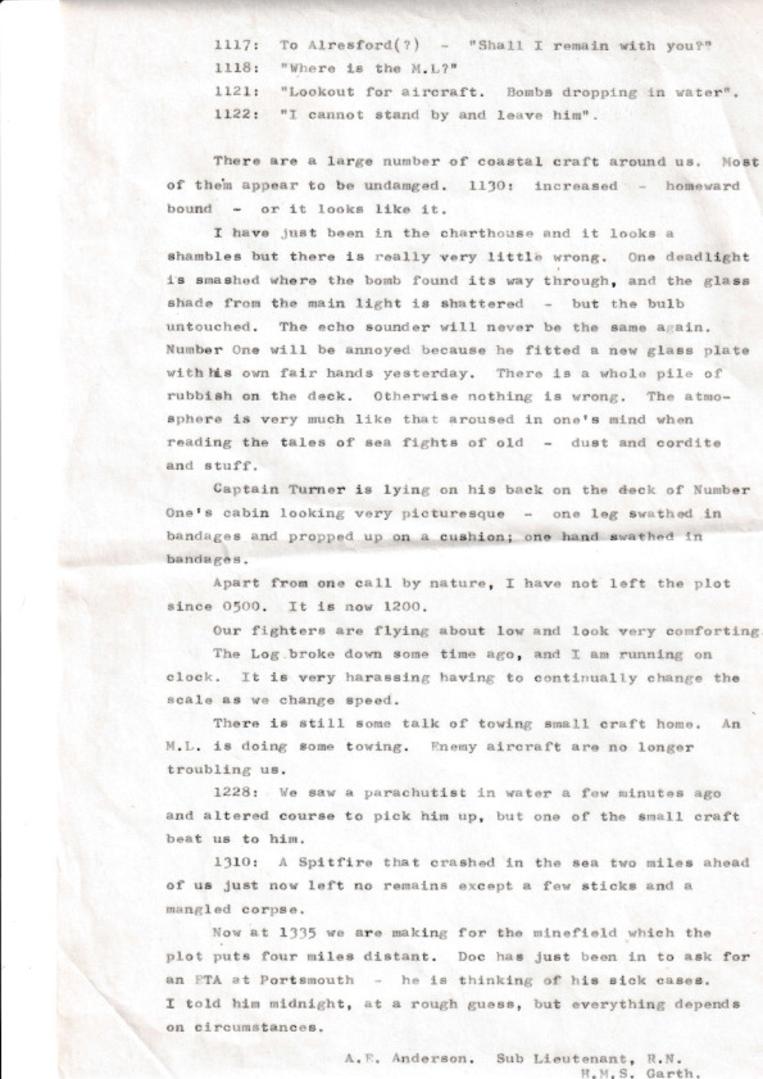 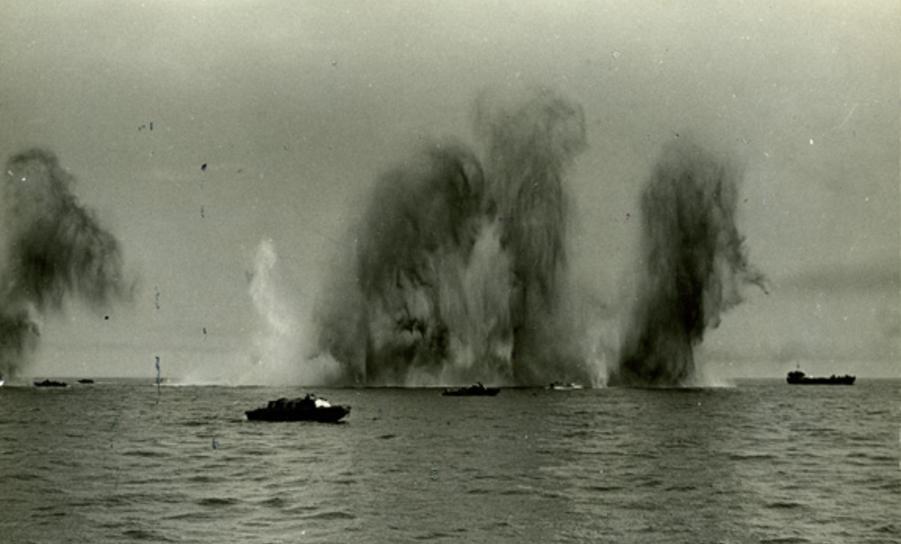 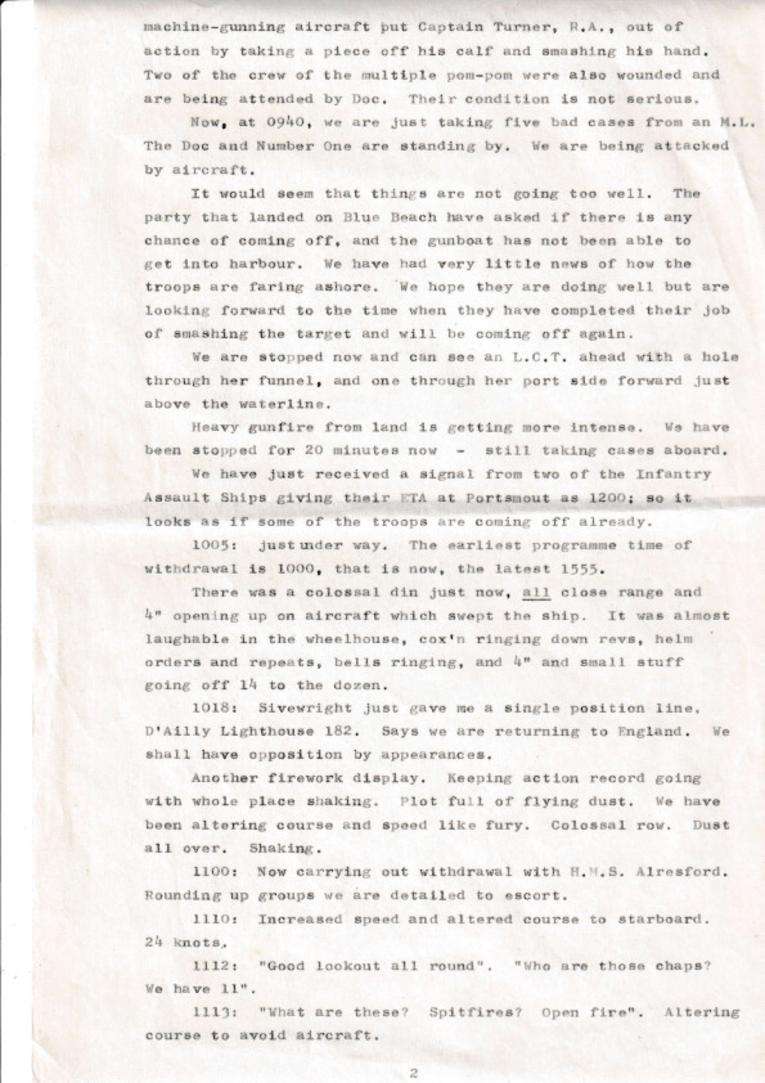 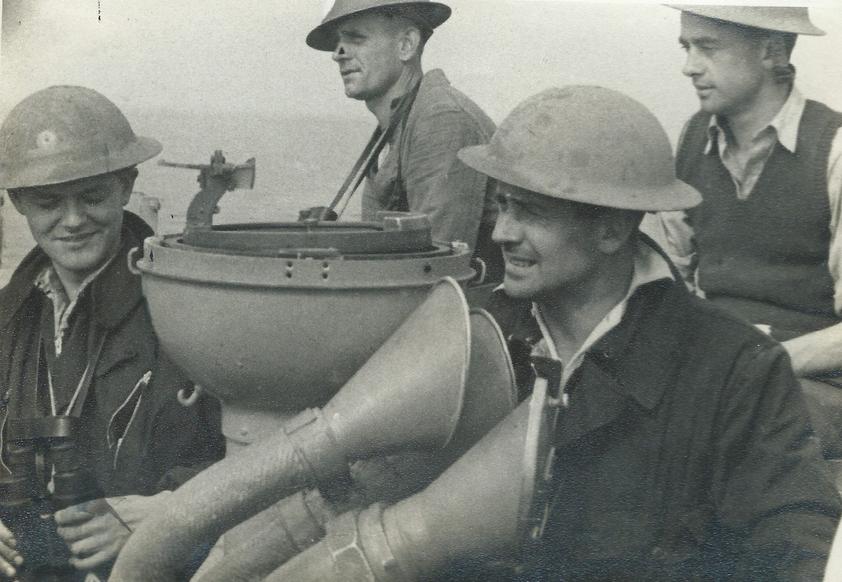 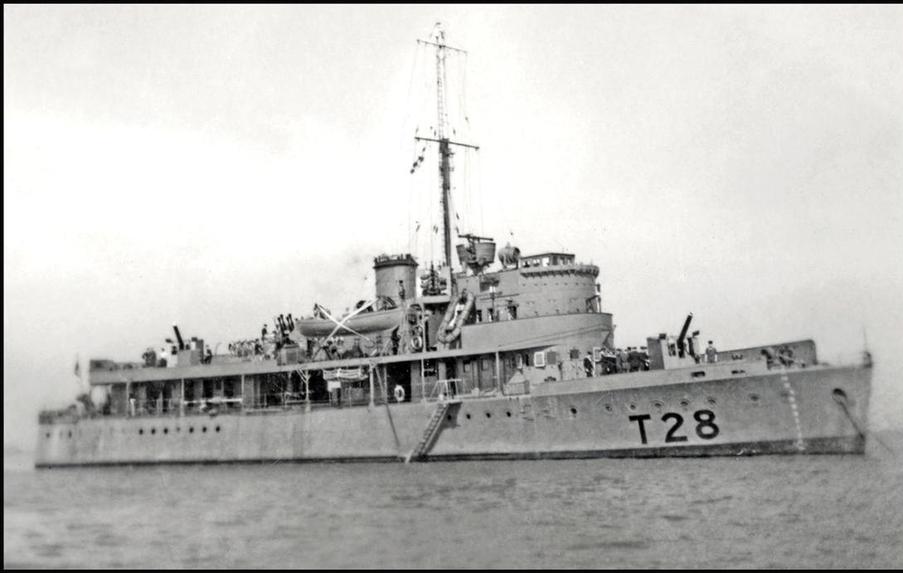 All the navy objectives had been achieved. The Navy had bought the troops across the channel and landed them at the right places at the right time. And under attack from the air and shore-based batteries had maintained a huge fleet off the enemy coast for five hours.

From the beleaguered beaches, came a signal to HMS Fernie, “It is getting a bit hot here! Boats are being hit. The high ground to the east and west must be bombed or shelled."

The destroyers moved in to give close support. They bombarded the headlands, going as close as possible. The destroyers blinded by smoke, were in danger of running aground.

Again and Again, under heavy assult and in spite of heavy casualties the navy went into the beaches until every man possible was withdrawn or the beaches were overwhealmed by the enemy and the troops taken prisoner.

At 12.50, HMS Calpe moved into the smoke and closed on the beach to assess the situation.

No movement was seen and she turned back into the smoke. As she emerged from the smoke on the seaward side she almost run into HMS Locust. Locust with her shallower draft and able to get closer to the beach was preparing to make a closer inspection of the beach when the message was received “Our people here have surrendered.”​

Lieutenant A. E. Anderson, HMS Guardian in Jervis Bay, Australia, in 1945.
​​Photographs and  Lt. A. E. Anderson verbatim record of the Dieppe action by kind permission of his son Anthony J. Anderson

A Chassure of the type  which attempted to enter the Harbour at Dieppe. 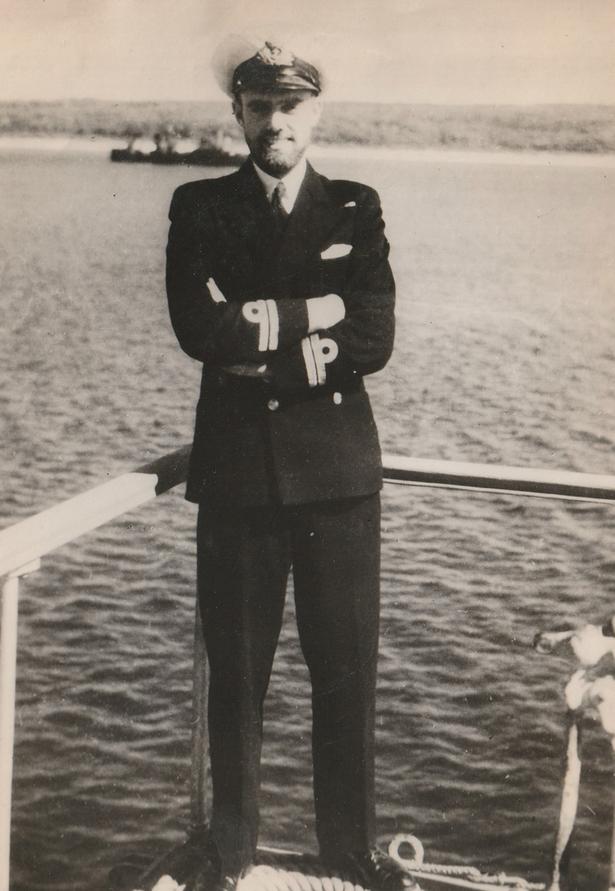 It had been intended that all casualties would land at Newhaven. So great were the number of the wounded and the severity of their wounds, that the wounded could not be unloaded into landing craft for transport to Newhaven. They were taken by the Destroyers directly to Portsmouth. A signal was sent, “Prepare to receive 600 to 700 wounded. On arrival at Portsmouth every available military and civil ambulance was waiting at the dockside. For two days and nights the staff at five hospitals worked around the clock. Surgeons worked almost nonstop for 40 hours operating on the wounded.

Dieppe was a new beginning, for three years the British and been on the defensive. For the first time since the outbreak of war we had taken the offensive against the enemy in occupied Europe.

In the greatest air battle after the Battle of Britain we had driven the Luftwaffe from the air above the channel.

The enemy believed we were preparing to attack the continent, kept 33 German divisions in the west.

Lessons were indeed learnt, the first of these being a much stronger military force was required to break through the German coastal defences. Secondly, it would be quite impossible to capture an occupied enemy harbour. 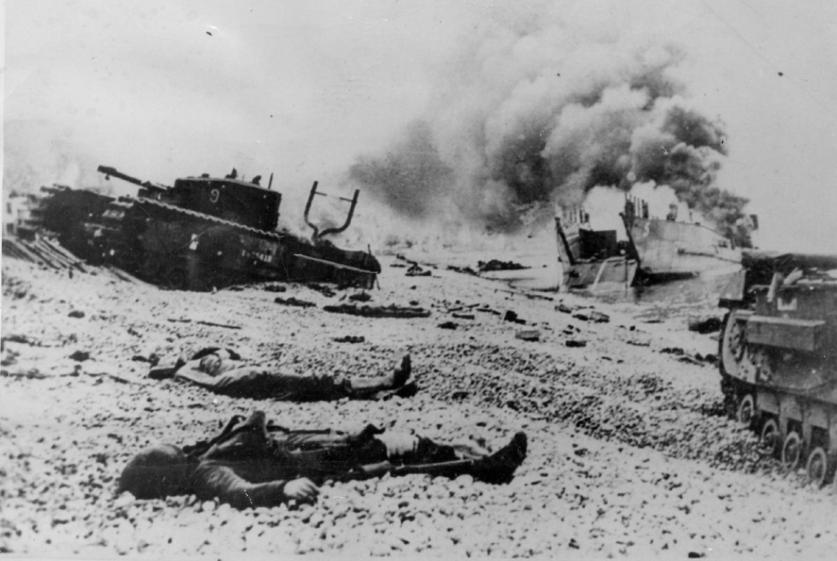 Stalin, the Russian leader, his country under attack from Germany was putting pressure on Churchill, the British leader, to open up a second front to take pressure off the Russian army.

The Allies, (Britain and the Commonwealth) and America were not prepared for a second front in 1942. They did not have the manpower, ships or control of the air, required for a successful invasion. Equally lacking was military intelligence, the number of enemy troops and how best to conduct an amphibious landing. A raid in force, named Operation Jubilee was planned on the enemy held French coast, at Dieppe. 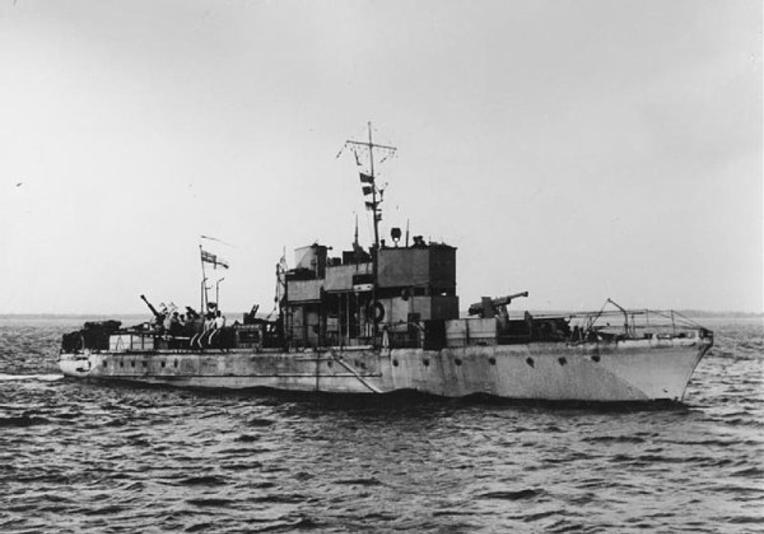 Lieutenant-Commander Scatchard sailed Garth at full speed parallel to the shore, laying a smokescreen astern and blazing away with his 4-inch guns. He then sailed back in the opposite direction protected by his own smokescreen, dashing past the battery again firing broadsides. The German Gunners recognized the pattern and each time Garth came out of the smoke with her guns blazing, they returned fire, straddle her with a three-gun salvo.

Goronwy Rees, a eyewitness on Garth wrote, “Calm and unmoved on the bridge, the commander continued to issue his series of rapid, precise, thin-lipped orders… the manoeuvre became monotonous and repetitive, and each time harder on the nerves, specially after we had been hit twice, the second time with considerable causalities and damage. A Petty Officer looked at me, shrugged his shoulders, raised his eyebrows and under his breath muttered “The old bastards going in again” It was spoken in a tone in which wonder, tolerance, and admiration were all equally combined,”

At 8.45, Garth badly damaged and with her ammunition nearly exhausted and could no longer maintain her bombardment, was ordered to take aboard as many survivors as possible and proceed with them to England.

Commander Ryder on HMS Locust  bought her into range and began bombarding the western headland. She fire smoke bombs to lay a smoke screen  across the evacuation beaches. Under heavy fire, landing craft approached the beaches in a desperate attempt to evacuate the troops, Many would not make it back.

Sub-Lieutenant A. E. Anderson photograph, "AFTER DIEPPE" of the Officers on HMS Garth.

GOAL OF THE DIEPPE RAID

The Dieppe Raid was to be a “Raid in Force” which would stay on shore for a short time before withdrawing.

Combined Operations required knowledge for an invasion on mainland Europe and the Dieppe Raid was a means of acquiring this knowledge. The Dieppe Raid was designed to test German reaction to a potential invasion, to discover the strength of the Atlantic Wall (The Atlantic Wall was a massive coastal defensive structure built on Hitler’s orders which stretched from Norway, along the Belgium and French coast to the Spanish border) and to find out how the enemy would manoeuvre its reserves.

Objectives of the Dieppe Raid.

Information was also required  about the German Radar, the new four-barrel anti-aircraft gun and the code book and enigma machine at Divisional Headquarters.

Dieppe Raid was chosen as the most viable of a number of assaults plans amongst which was “Sledgehammer”. In 1942 Britain could have landed only six divisions on the European coast, while the Germans had 25-30 divisions in Western Europe. It was decided that Sledgehammer was impractical and would be a disaster. This was reinforced by the failure of the smaller Dieppe Raid.

The assault troops for the Dieppe Raid would mainly be Canadian, with British Commandoes and a small number of American Rangers. This would be the first time during WW2 that the Americans would go into combat in Europe.

Also included was a Radar scientist and a naval “cutting out” party on board HMS Locust which were to seize the barges and take them back to England.

Right from the start the problems began to mount up. The RAF would not supply bombers to soften up Dieppe before the main assault. (Although RAF fighter, fought the biggest air battle since the Battle of Britain, above Dieppe.) The Royal Navy would not supply any large ships to bombard the enemy shore positions. Although the smaller Navy vessels did everything, and more, asked of them.

The Royal Navy supplied 237 ships and landing craft. However, the largest of these were six Hunt-class destroyers with 4 in (100 mm) guns. 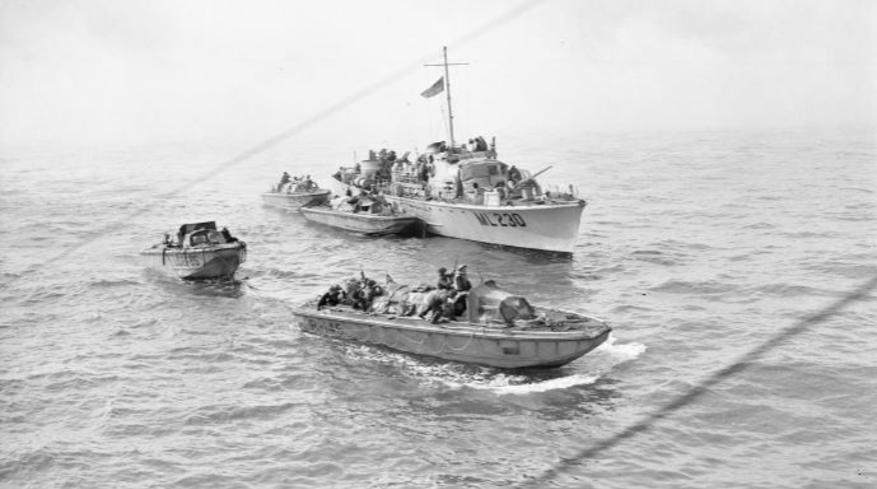 Locust and her Chasseurs carrying the Royal Marine cutting-out party attempted to get into the harbour, while Garth Bleasdale, Berkeley and Albrighton opened fire with broadsides at the enemy strong points in the buildings along promenade.

After several attempts of entering the harbour under very heavy fire when Locust had been severely damaged, Commander Ryder transferred from Locust to Calpe.  Commander Ryder told Hughes-Hallett, it was his opinion that neither the Locust or the chasseurs would survive another attempt.

Only a few months previously German General Konrad Hasse had declared the area around Dieppe as “Fortress Dieppe”. Protecting Dieppe were a sea wall, two rows of barbed wire entanglements, road blocks, pill boxes, machine gun posts, sniper emplacements, artillery strong points, heavy artillery on the headlands on both sides and a beach which could be swept with machinegun fire from both sides.

With the minesweepers in the lead, the fleet cleared the minefield at 03.00.

Their luck ran out when the fleet ran into a German convoy, so lost the advantage of surprise. The escorting destroyers of group Five, Slazak and HMS Brocklesby were off station when at 03.47 a brilliantly illuminated star-shell lit the night sky above Group Five. The gamble of a surprise attack had failed. Every ship in the German Convoy opened fire. Without their escorting Destroyers in close proximity, group five was outnumbered and outgunned. The smaller landing craft broke formation and scattered. The remaining vessels, badly mauled, were astonished to see the German vessels withdrewing into the darkness of the night.

Four of the landing craft had been so badly damaged that they had to return to England. With the landing craft scattered it looked as though the action was over for Group 5, but Motor launch ML 346 had shepherded the remaining landing craft and they continued on to their destination, Yellow Beach.

The Destroyers and Locust lead the landing craft to their landing beaches. At once the landing craft came under heavy attack. Those who survived the landing found themselves pinned down on the beach. Men and some tanks did manage to get through the beach defences, but in too small numbers. Sappers carrying heavy packs of explosives to blow up the seawall to allow the tanks to cross, to destroy the barbed wire entanglements and demolish the road blocks were decimated.  Of seventy which landed on one beach, all but nine were killed in the first moments of landing. 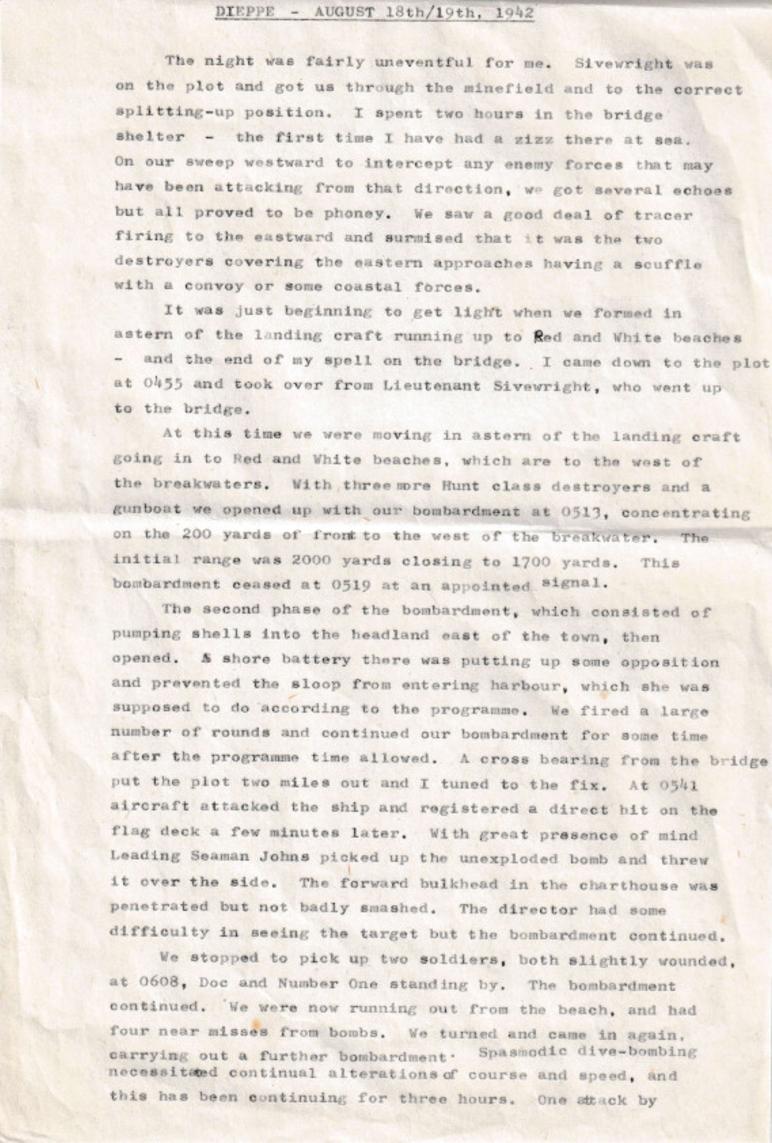 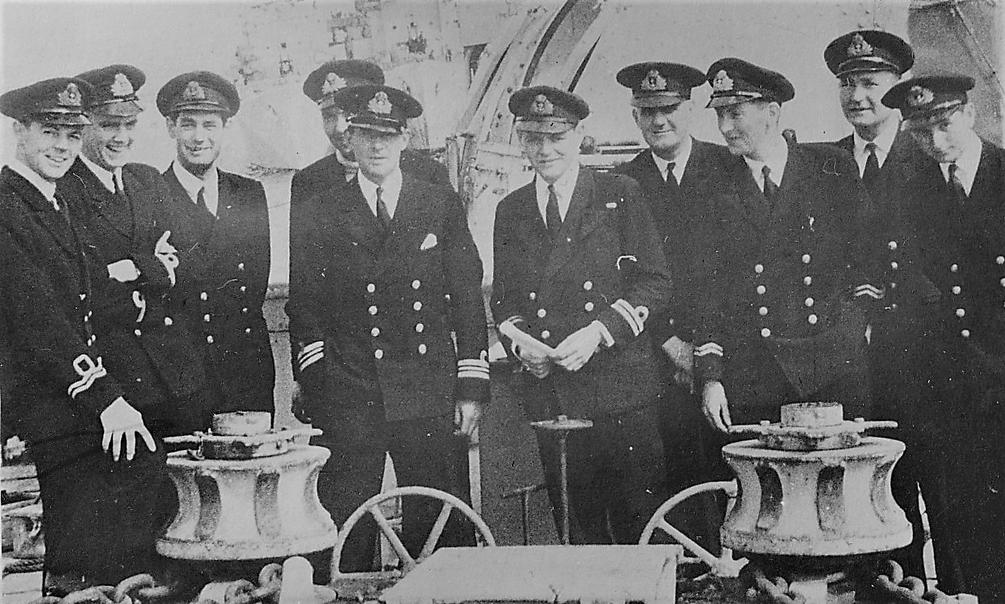 Artillery Officer Captain G. A. Browne who was to act as forward Observation Officer for the Destroyer Garth, didn’t manage to get off the beach. Lieutenant-colonel Catto, having lost his radio and operator asked Captain Brown to contact Garth to report to the Calpe “Doug touched down 05.35” This and other messages never got through and, on the Calpe, they did not know the troops were being slaughtered on the beaches.

Corporal Ellis, having struggled through the wire found himself alone on the headland and entered a house to find it empty. Garth  having received an urgent message requesting fire on the white house overlooking Blue Beach from Captain Browne began shelling it.

Captain G. A. Browne, still on the beach sent another message to Garth to relay to Calpe “Doug still on beach, casualties heavy, MG Mortars 06.10”

Garth having taken part in the bombardment of Dieppe, at 5.35 switched her fire to the battery on the east headland. For three hours she fought a desperate duel with the shore-based batteries.

Lieutenant-Commander J. P. Scatchard reported, “ I found throughout, their fire was extremely accurate and it was impossible to go in and carry out a steady bombardment. It was a matter of going through our smoke until close , squaring off and then retiring, then circling around and repeating the manoeuvre. On each occasion we were straddled and it became extraordinary that there were not more of us hit,” 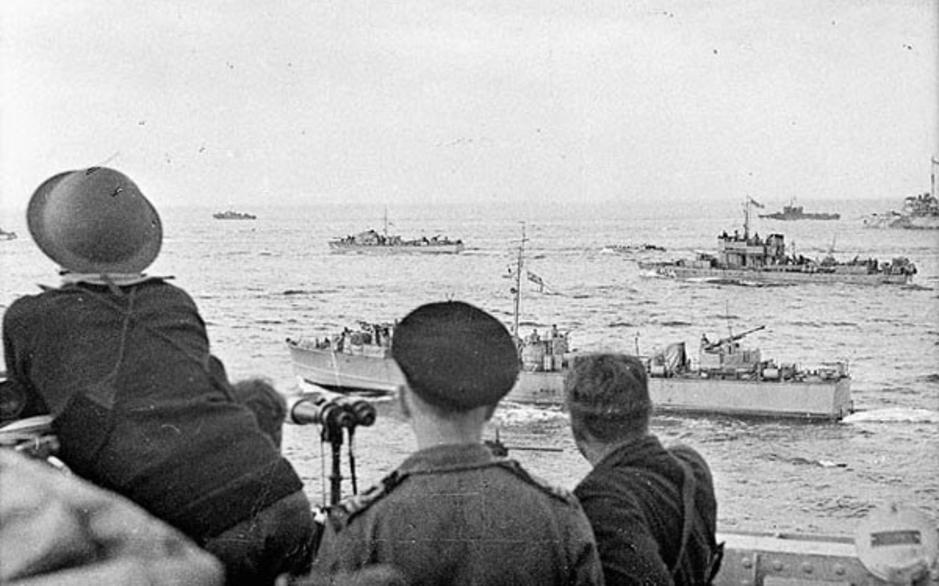