​1918, Launched at Aberdeen as an Admiralty drifter named Froth.

25 Oct 1918. Completed conversion to a minesweeper.  World War One was to come to an end a few weeks later on the 11 November 1918. However there still would have been many thousands of mines to clear.

1923, She was again sold and her name changed to Manx Princess (DO91 registered at Douglas Isle of Man.)

Dec 39, Eunice and Nellie is a torpedo recovery vessel.

November 1944. Before the end of WW2, with new purpose built minesweeper were being completed in British and American ship yards the Eunice and Nellie was returned to her owner.

1954, Eunice and Nellie was sold for breaking up.

To find out more of the Eunice and Nellie movements go to DRIFTERS AND TRAWLERS. 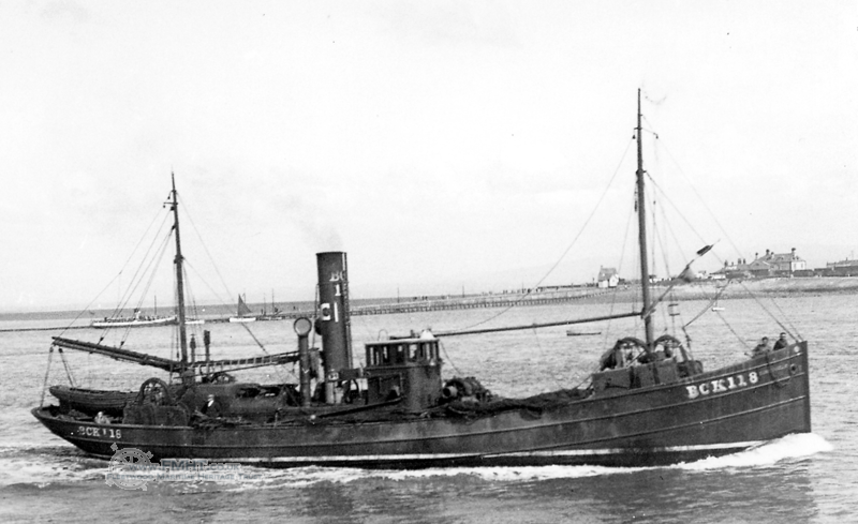 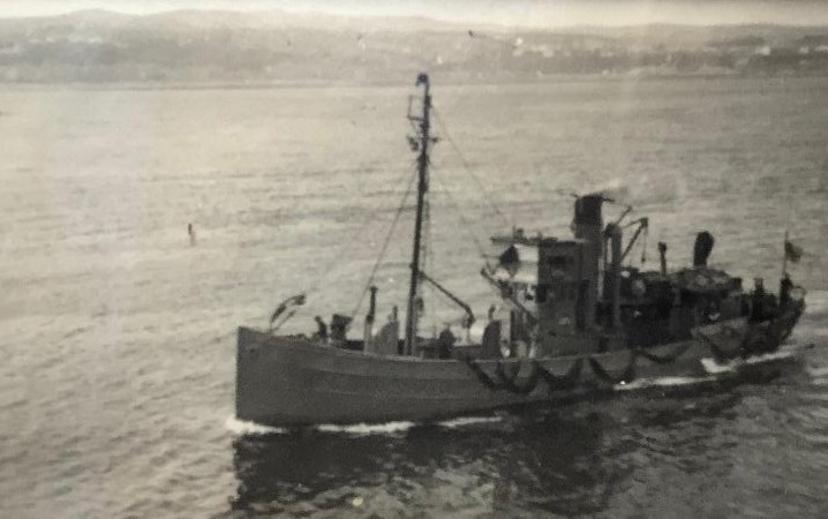 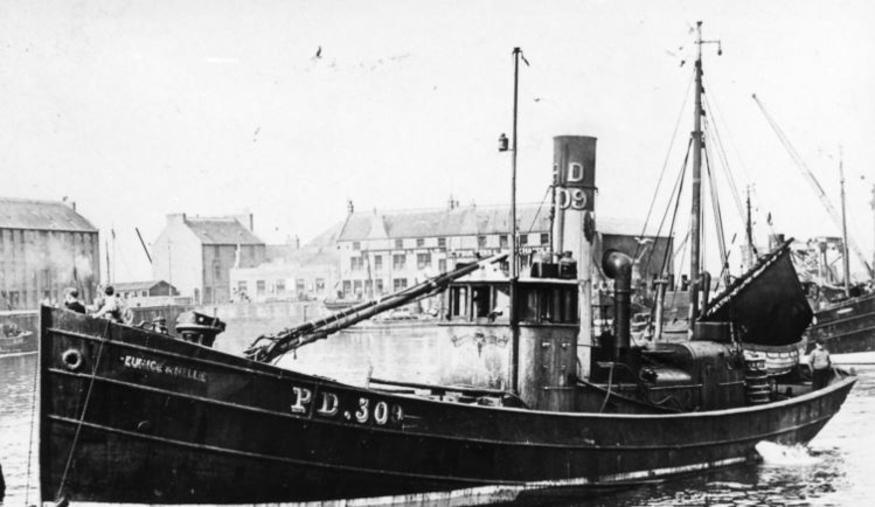 Alex served his time as a blacksmith in the hamlet of Kilkenny in Scotland and worked as a blacksmith at Aberfeldy. In 1936/37 Alex went to Alnwick where he used his blacksmithing skills at a Cleet maker (Cleets are large hooks).

Alex’s father had a steam powered fishing drifter, the Anster Bell, (KY52) where he honed his skills as an engineer for steam engines.

He also worked as a blacksmith at Aberfeldy, where he met and married his wife.

Alex and his wife moved to Leith, where he joined the Royal Navy on the 20th July 1940, shortly after the fall of Dunkirk. At that time Germany was doing everything it possibly could to block the East Coast sea lanes. Should Germany have succeeded, Britain would have lost the war. The call went out for men to crew the vessels which were hastily being converted into minesweepers. Alex was one of these men. His skills as a blacksmith and experience with steam engines were urgently need by the Royal Navy.

At this time Trawler minesweepers were known as “Smokey Joe’s”. They were coal powered steam driven vessels requiring skilled men like Alex to keep them operational. Today it seems strange that trawlers used coal, but everything relied on coal back then, the Power Stations were fuelled by coal. The trains used coal, our homes were kept warm with coal and many ships were Steam Ships using coal.

Alex wrote to his wife and asked her to move to Cellardyke where she would be safer as Leith and Rosyth were being badly bombed.

Alex underwent his initial training for minesweepers at HMS Europa. HMS Europa was known as the 'Sparrow's Nest', the Royal Navy Shore Base of the Royal Naval Patrol Service (RNPS)

His first Minesweeper was HMT Three Kings, a minesweeping drifter. Drifter were the smaller vessels which fished in the North Sea for mackerel. Now they swept for mines.

Alex was posted to HMS Iron Duke, the Base Ship at Scapa Flow in the Orkney Islands. The Iron Duke had taken part in the Battle of Jutland during the First World War. At Scapa Flow, Alex served as Chief Engineer of HMS Trust, guarding convoys and the sea lanes around the top of Scotland and towards the Arctic. These were the major route for large convoys from America and of the Russian Arctic Convoys. HMT Trust was an Anti-Submarine trawler fitted with ASDIC and Depth Charges. Anti-Submarine Trawlers usually worked in small groups and would maintain a defensive ring around convoys.

Leading up to D-day, Alex was based at HMS Hopetoun a Combined Operations Training Centre established at Port Edgar on the Firth of Forth where British and Allied navies carried out training for the D-Day landings. The harbour served as a landing craft and minesweeper base.

On D-day Alex was based at HMS Vernon the Royal Navy shore base at Portsmouth where he served on the minesweeper “Young Cliffe” clearing  mines for the D- Day landing beaches.

In February 1945, Alex was again transferred to St Tudno (Wildfire III, Queenborough) and was Chief Engineer on HMT Malacolite. At that time all of the Wildfire III vessels were involved in clearing mines from the Scheldt Estuary and opening up the Port of Antwerp. By so doing they shortened the war. They also opened up the Dutch Ports allowing food and humanitarian aid to flood in to the Dutch people who were starving to death.

Alex finished his service at HMS Valkyrie the shore base at Douglas on the Isle of man where he served on HMT Eunice & Nellie.