The Firefly, probably after WW2 when returned to the owner as the  fishing vessel St Just.

​Thank you to  Don Whiteley who's research found the burial sites of Firefly's casualties.

CASUALTIES OF THE FIREFLY 03 FEBRUARY 1940, SITE OF BURIALS.

The Newspaper article is from Les Emery and is from a newspaper a Grimsby newspaper dated around 2005. It was sent to Les by Verdun (Vic) Willoughby who was on the Firefly at the time of the explosion. He is named in the photo. Vic told Les that the man named as Harry Willoughby was in fact the ship’s engineer Harry Wilson. The skipper is standing on the far left, with the gas mask bag.

HMT Firefly was firstly based at Great Yarmouth, later in 1940, she worked out of Wildfire III, Queenborough for two years before being transferred to Harwich.

The early part of her service in the Royal Navy was certainly eventful. Shortly after being requisitioned on the 2nd December 1939 the Firefly took part in the rescue of survivors from the Swedish Ship S.S. Rudolf which was torpedoed and sunk 30 miles North-East of St. Abbs Head. The S.S. Rudolf lost nine of her crew with the Firefly and Cardew rescued fourteen survivors.

Only a few months later and just five months after being requisitioned on the 3 February 1940 the Firefly would be devastated by a mine.

The Firefly was sent from Leith (near Edinburgh) to neutralize a mine which had broken away from a British Minefield and was floating in the Firth of Forth. As they attempted to deactivate the mine it exploded killing 13 of her crew and wounding most of the rest. The entire upper structure of the Firefly was destroyed, but she didn’t sink and would later be rebuilt to serve at Wildfire III, Queenborough. 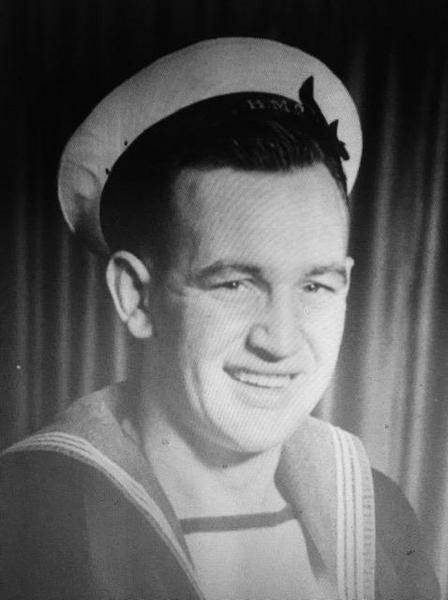 DISTINGUISHED SERVICE MEDAL. A DSM was awarded to Chief Petty Officer Charles Edward BALDWIN P/J 56017, Minesweeping trawler HMT Firefly for great courage and skill in securing and stripping live enemy mines without regard for own safety. Presentation made by King George VI at HMS Vernon 19 Dec 1939 for rendering safe first German influence mine at Shoeburyness 23 Nov 1939. Helped OUVRY, LEWIS and VEARNCOMBE render safe first Type A magnetic mine and GLENNY and VEARNCOMBE render safe second Type A magnetic mine at Shoeburyness 25 Nov 1939.

William Wood Whyte, Leading Seaman, H.M.T. Firefly. The above Appointment and Awards are for, unfailing courage, endurance and resource in H.M. Trawlers, Drifters and Minesweepers in their hard arid perilous task of sweeping the seas clear of enemy mines.

WEEKLY RESUME (No. 14) of the NAVAL, MILITARY AND AIR SITUATION.

Casualties due to enemy mining off the East Coast continue, but have not increased, and the flow of trade has been maintained. Good progress has been made in the evolution of a suitable form of sweep for the magnetic mine.

German Mine Laying. Further mines have been dropped from aeroplanes in the HUMBER and THAMES areas. During the night of the 5th-6th December aircraft were particularly active. 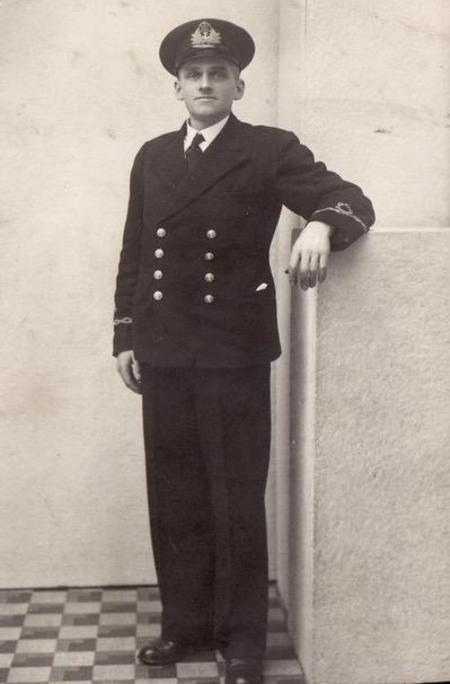 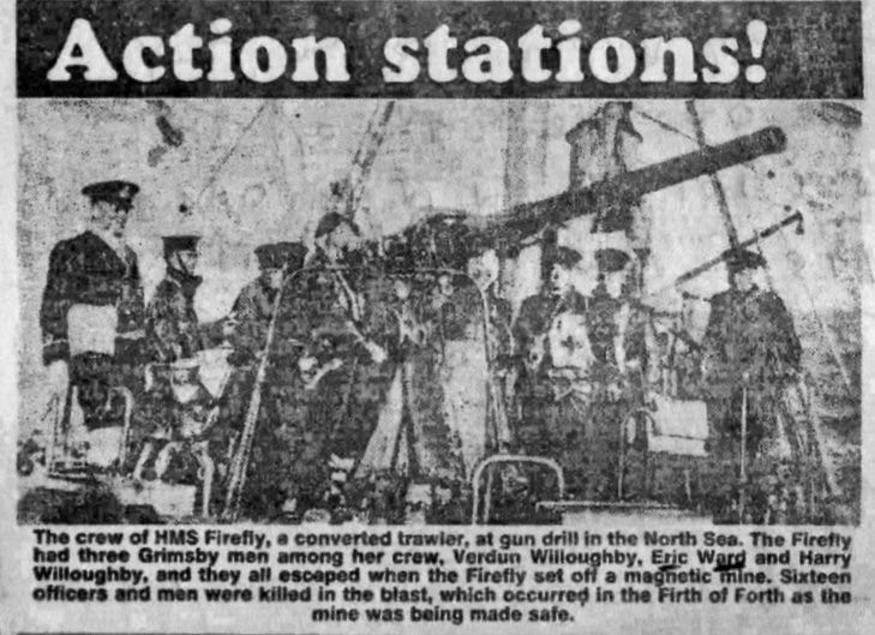 Sep 1939. Requisitioned by the Admiralty as a minesweeper and renamed Firefly. Hire rate £215.4.1d monthly.

2 December 1939. The Firefly with the Cardew rescued survivors from the S.S. Rudolf which had been torpedoed by a U-boat.

3 February 1940. The Firefly was devastated by an explosion from a mine which the crew were attempting to to defuse.  Most of the ship’s company were at the rail-side, watching the corralling of the mine
by a boat party. At a critical moment a destroyer passed at speed setting up a substantial bow-wave which in turn rocked the small boat to such a degree that the pulling oars touched one of the mine's protruding detonator spikes, setting off the explosion.  Thirteen of her crew were killed including her Captain Lieut. David B. Johnstone. There were only four survivors.

(Thank you to David  A.  Johnstone, son of  Captain Lieut. David B. Johnstone for the above information.)

The Firefly was towed to Leith by minesweeping trawler WARDOUR.

17 February 1942. The Firefly while in company with the Minesweepers Caswell and Stella Rigel was attacked by two enemy aircraft but were missed. Often enemy planes came in very low. So low in fact that a Do 217 accidently hit to mast of the minesweeper Francolin. The Francolin was sunk but the Do 217 crashed into the sea.

Captain of the Minesweeper  HMT Firefly , Lieut.David B. Johnstone who lost his life 3 February 1940. 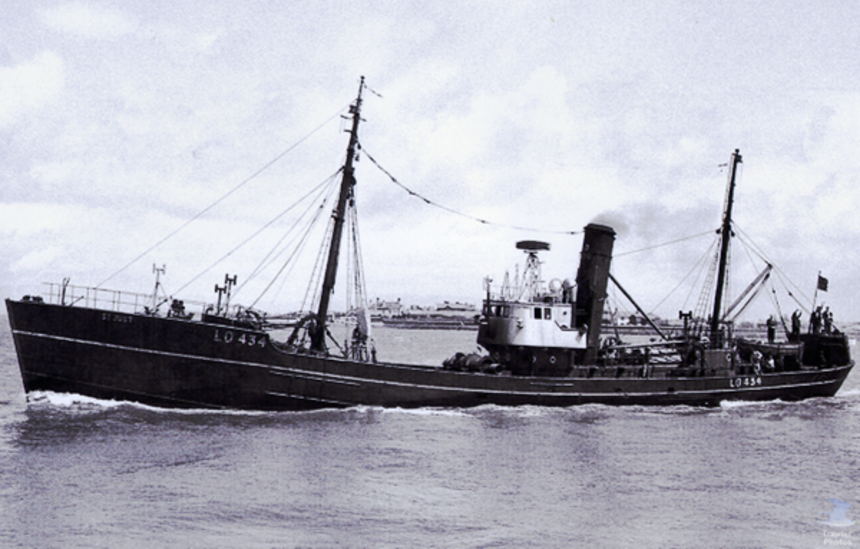 Another of the four survivors from that terrible explosion was James Sharlotte, whose son Colin Sharlotte contacted us.

David Johnstone who’s father served on the Firefly tells how he remembers on the 3rd September 1939 he and his mother had been invited on board the Firefly for lunch when a dispatch rider drew up and delivered a telegram from the local RN HQ to the effect that "We were now at war with Germany our Government having not received any reply for a peace pact or withdrawal of the Nazis from Poland." 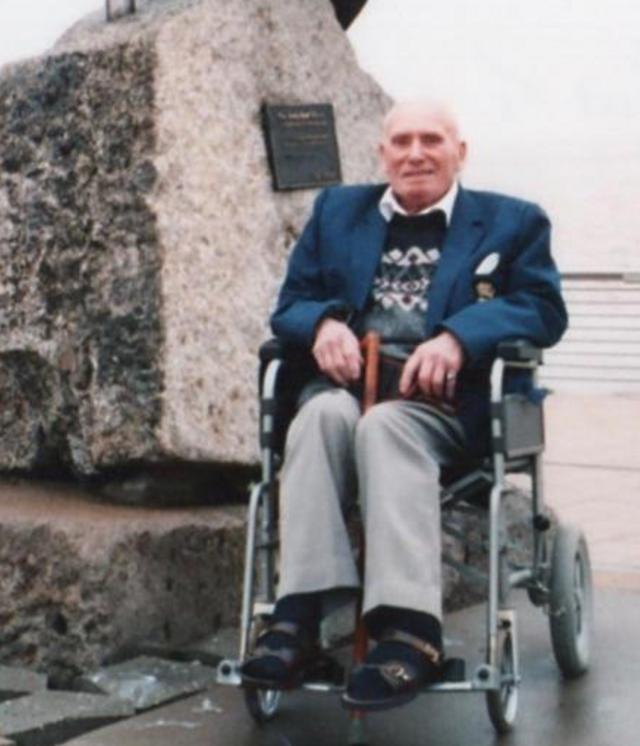 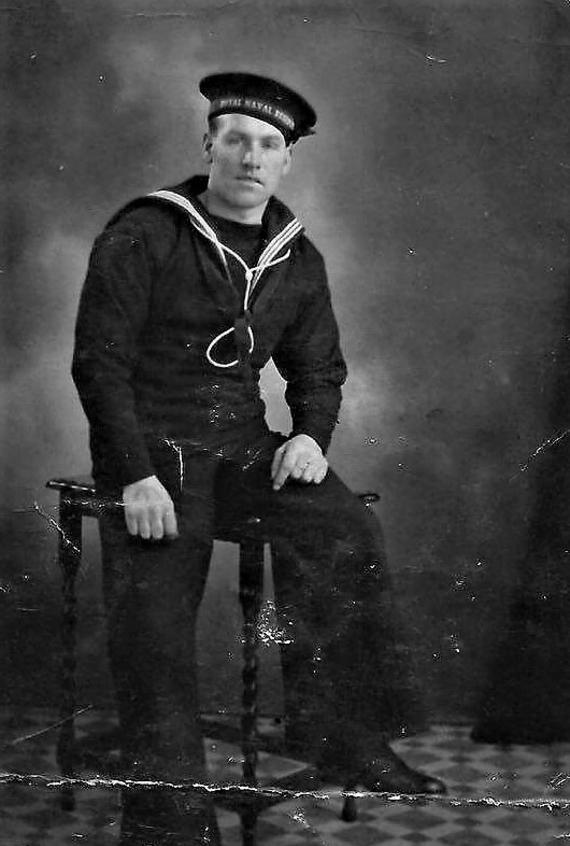 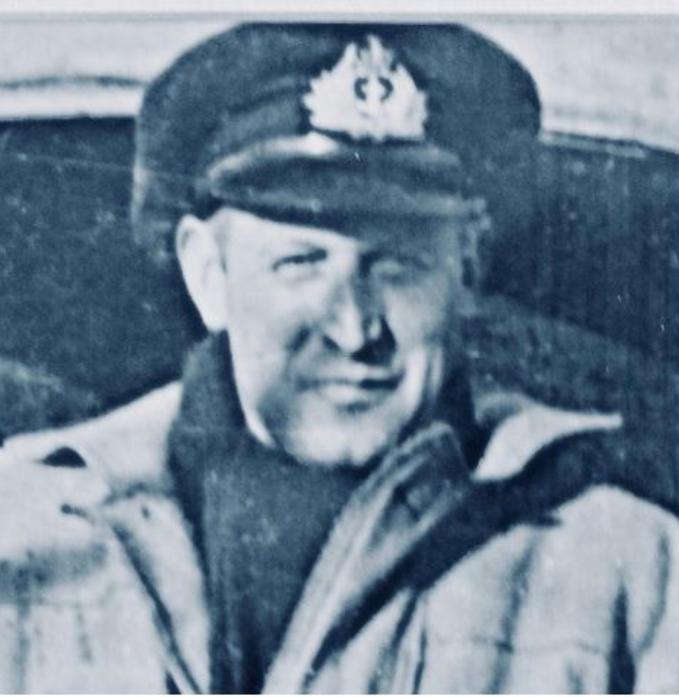 Despite the devastation explosion from a mine, very close to the Firefly, killing thirteen of her crew, astonishingly there were survivors.

Don Whiteley tells us, “My father, Able Seaman Donald Newsome Whiteley was on the Firefly when she was devastated by the mine in the Firth of Forth. Fortunately for him he was on galley duty that day so escaped injury.”

“He never spoke about the incident or indeed any other parts of his war service except for the escapades they got up to on shore.”

My mother told me very late in her life. “Apparently he came up on deck then straight over the side and swam for it – he was always a very strong swimmer.”

After the incident Don was transferred to the Northern Dawn which was subsequently loaned to the US, with crew, for submarine hunting and minesweeping duties off the US east coast. The boat then went to South Africa for similar duties off the Cape of Good Hope.

Photograph and information by kind permission of Laura Clay, whose husbands grandfather was  John Robert Clay.

Donald Newsome Whiteley was one of only four survivors when the Firefly was devastated as a boat party attempted to disarm a mine. (Photograph by kind permission of Duncan Milner his grandson.)