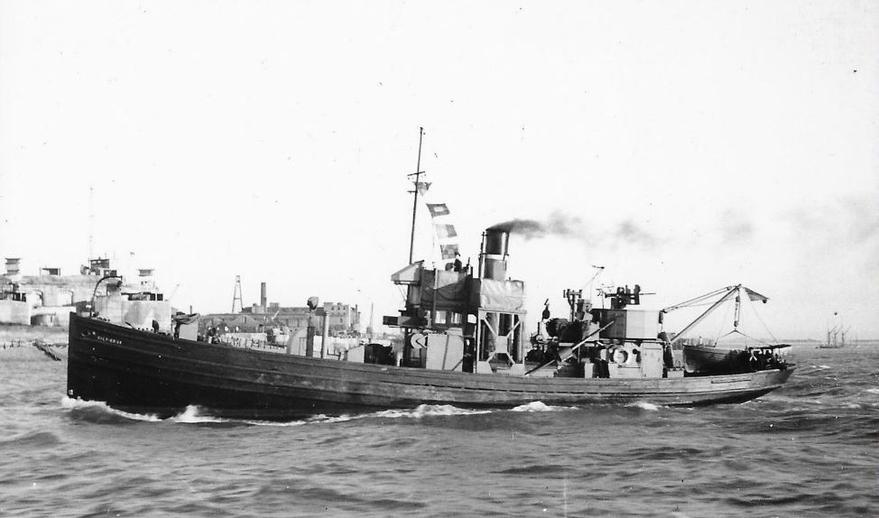 HM Drifter Gilt Edge Minesweeper and Dan Layer flying the White Ensign with possibly the Sheerness Garrison in the background.

The Drifter, Guilt Edge saw service in the first and second World Wars. Requisitioned by the Admiralty in 1917 she was fitted out as a minesweeper with a 6 pounder gun.

She was again requisitioned as a Minesweeper in WW2 and was at first based at Portsmouth.

With the number of the new magnetic mines being dropped by the enemy in the Thames Estuary and on the East Coast threatening to overwhelm the Nore Command, the Gilt Edge was fitted with Magnetic sweep gear and sent the Wildfire III at Queenborough.

Later her main rolls became that of a Dan Layer. Dan Layers were usually former Trawlers or Drifters (fishing vessel) equipped for laying Dan buoys.  Dan buoys are marker buoys consisting of a long pole designed to float vertically, with a flag and sometimes a light on top which are moored to the sea bed.

Accompanying a group of minesweepers, Dan Layers laid Dan buoys to mark the swept area marking the cleared sea lanes assuring there were no overlaps or missed areas.

1939, Requisitioned by the Admiralty firstly as a Minesweeper and later a Dan Layer.

1945. Sold to William. G. Falconer at MacDuff in Scotland and re-registered in Banff as BF61.

1950. Sold for scrap, The last steam drifter from MacDuff (Scotland).

To find out more of the Gilt Edge movements go to DRIFTERS AND TRAWLERS.

Unusually, S. R. Mills was the Skipper for the Gilt Edge throughout her WW2 service.