Jack Eve was a “Drifter” fishing vessel taken over by the Admiralty at the beginning of World War Two. The vessels best suited as minesweepers were mainly trawler and drifter fishing vessels. Trawlers were the larger ocean going vessel which dragged a trawl net behind the ship. Drifters were smaller fishing vessels which fished the North Sea with long (curtain) drift nets.

Jack Eve, a drifter, was requisitioned by the Navy in November 1939. She survived the war and the extreme hazards of minesweeping to be returned to her owners in November 1945.

In December of 1939 the first magnetic mines began to appear in the Thames Estuary. These were
“Ground” mines which rested on the sea bed instead of floating on a tether which could be cut by conventional minesweeping. At first the British were struggling to devise counter-measures to the magnetic mine. But on 23 December 1939 a mine landed in shallow water off Shoeburyness in the Thames Estuary. This mine was accessible at low tide and two very brave men Lieutenant-Commander John Ouvry and Chief Petty Officer Baldwin disarm it.

With this new information the LL (double L) system of minesweeping was devised. LL sweeps are a pair of electric cables which are towed parallel to each other on floats and emit a strong electric pulse which generates a magnetic field to detonated magnetic mines.

Jack Eve is recorded as being at the Nore Command, Sheerness (Wildfire III, Queenborough) in 1941 and 1942.

In 1939 and 1940 the minesweepers were often targeted by the Luftwaffe. In small groups, moving in straight lines,  Minesweepers made easy targets to bomb or strafe. But the minesweeper fought back. They were armed with Lewis guns and other anti-aircraft guns. On occasion they have blown enemy aircraft out of the sky.

Jack Eve also appears on the List of Ships which were at Dunkirk and assisted in the evacuations, although little is known about her exploits.

While many of the Wildfire III, Queenborough minesweepers would have been doing the vital job of keeping the evacuation sea lanes free of mines the Jack Eve in order to be listed must have swept for mines close to the beaches and taken men off the beaches returning them to England. She would have almost certainly helped in the rescue of survivors from other sunken ships. She would have experienced shelling from the land and bombing from the air.

OFFICERS from Navy List MAY 1940 (Prior to Dunkirk)
(Rank. Name, Date joined ship.) 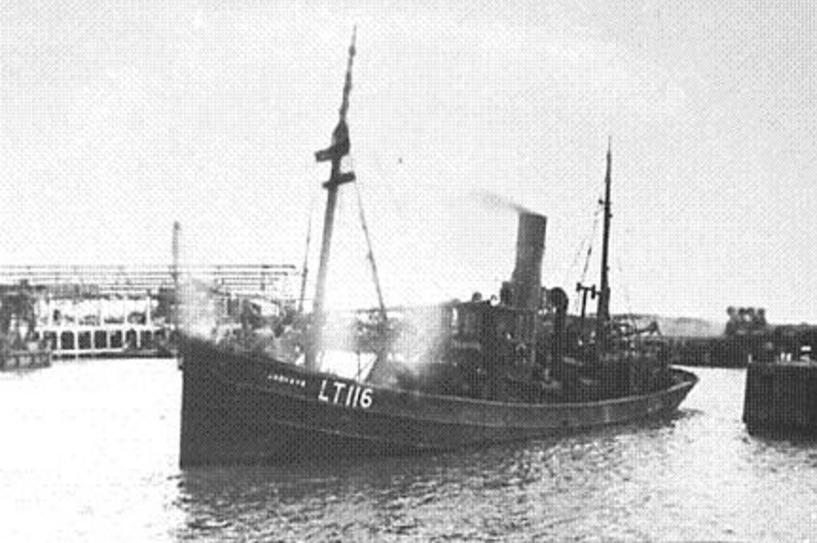 Launched 31 Jul 1920 and named WHIRLBLAST,  owned by the Fishery Board of Scotland.

Requisitioned by the Admiralty in 1939 to be used as a Minesweeper.

The Jack Eve when she was a fishing drifter and fished herrings in the North Sea.