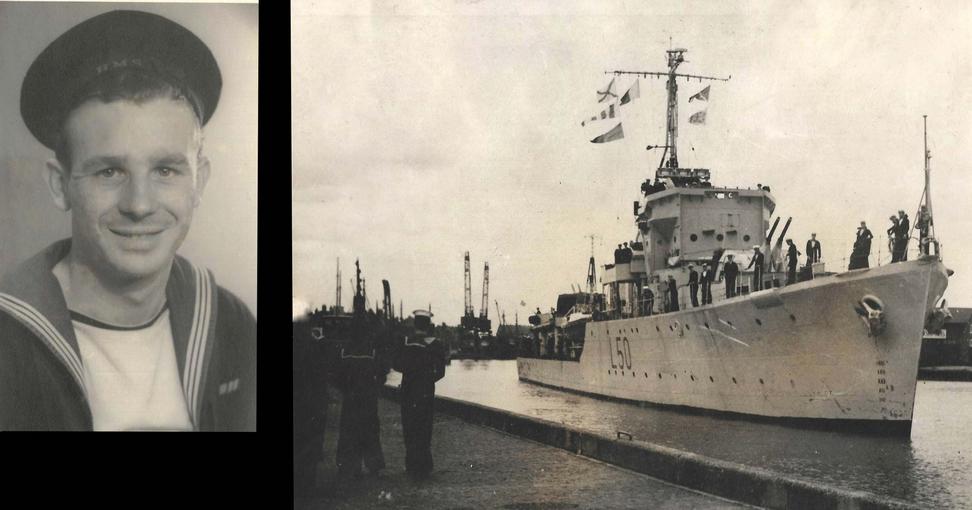 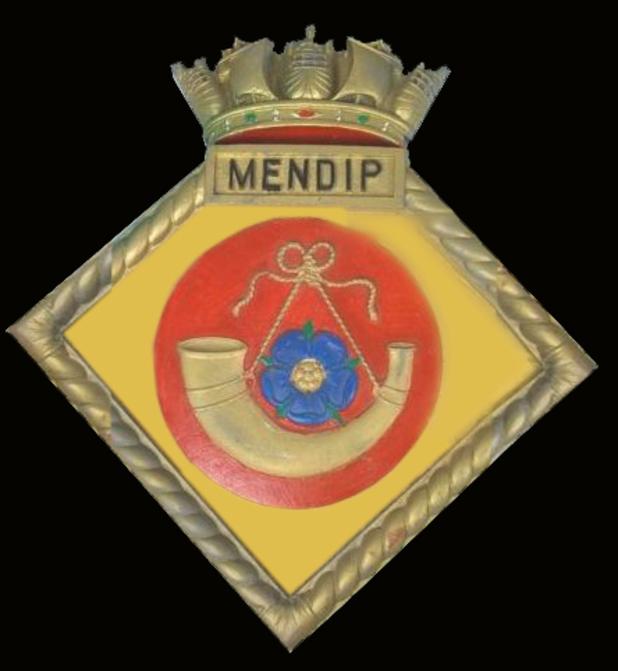 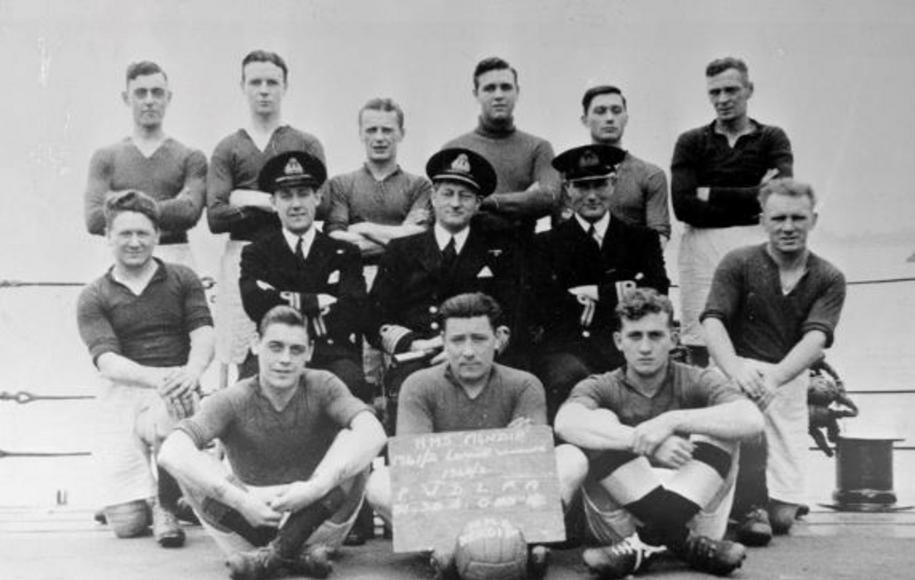 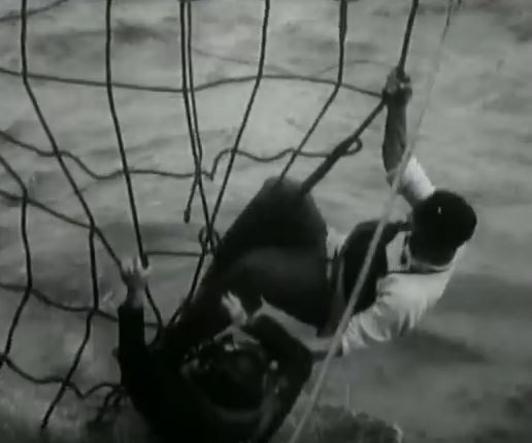 Thank you to Martin Stiff for the photograph and information. Martin’s father, Leonard Stiff, served on HMS Mendip

The photo of HMS Mendip was taken at Great Yarmouth, 1945 (written on back of photograph). Leonard use to cut the crews hairs on  the ship for  ‘fag ‘ money !

ERNIE ELLIS's JOURNAL  can be found HERE.
Ernie’s Journal is an outstanding document and a fascinating insight into the life at sea during World War Two onboard HMS Mendip. It gives a first-hand accounts of war at sea and the Allied amphibious landing on mainland Italy at Salerno. (Operation Avalanche)

To find out more about this incident and the part HMS Mendip played in the Invasion of Italy, see Ernie Ellis's Journal which can be foundHERE. THE JOURNAL OF TELEGRAPHIST ERNIE C. ELLIS, ROYAL NAVY, HMS MENDIP.

BADGE.
On a field Red, on a White roundel, a bugle horn stringed. Black within the strings a blue rose.

HMS Mendip was laid down on 10th August 1939 and launched on 9th April 1940. In March 1942 she was adopted by the civil community of Shepton Mallet in Somerset. HMS Mendip is the name of the Mendip Fox-Hunt in Somerset.

The Mendip Fox-Hunt started as a private hound pack around the middle of the 18th century. The hounds moved to kennels near Priddy in 1921 where it remains to day.

Time out of Action, 3 weeks.

MENDIP was escorting a convoy to the Gulf of Salerno when a near miss detonated about 20 ft. off the port side abreast the forward boiler room. The port side plating and framings, abreast the engine room and boiler rooms was slightly distorted. The holding down bolts to the sliding feet of the port and starboard H.P. and L.P. turbines were fractured and distorted and the keep plates lifted.  The holding down bolts of both boilers were distorted. Shock damage affected the turbo-generators and auxiliary machinery on the port side of the engine room. One diesel generator was seriously damaged.

Shock damage put all radar and the gyro compass and Chernikeef log out of action.

12 Sep 43. Released from AVALANCHE and took passage to Malta for repair.

3 Oct 43. Passage to Gibraltar as part of escort for convoy even though speed is still restricted.

15 Oct 43. Transferred to the 58th Destroyer Division based at Malta.

1 Nov 43.Escorted the Battle ship HMS Warspite, which had been badly damaged by air attack off Salerno and was under tow, from Malta to Gibraltar.

4 Nov 43.  Although HMS Mendip was not an escort for convoy UGS23 included amongst the cargo ships was that infamous Sheppey ship the Richard Montgomery.

24 Nov 43.Deployed with HM Destroyers ILEX and NUBIAN for bombardment of shore positions near mouth of THE Garigliano River, Italy. The Garigliano River, was the centre of a system of German defensive lines including the Gustav Line around which the battle of Monte Cassino took place It is said that the waters of the river ran red because of  blood from the many bodies of soldiers.

Additionally, Hunt Class Destroyers engaged on East Coast convoy work, the Type ones and the Type twos were fitted with a single QF 2 pounder "bow chaser" gun for anti-E-boat work. (Although in the photograph above there isn’t one)

24 Oct 1940.HMS Holderness, while on work-up exercises, and undertaking depth-charge practise, one of the depth charges dropped from her stern blew up prematurely.  She sustained serious damage to her stern structure and five of her crew were missing presumed killed.

30 March 41.HMS Mendip is attacked by German aircraft while escorting Convoy FS449 in the North Sea.

21 June 41. HMS Mendip escorted Convoy FS520, departing Methil 19 June 41, arriving at Southend 21 June 41. While under attack from the Luftwaffe the Dutch ship SS Schieland was bombed and sunk off Southwold, Suffolk. HMS Mendip rescued the Schieland’s surviving eight crew. Earlier, in the same convoy the British Ship Kenneth Hawksfield detonated a mine and sank with the loss of one of her crew.

3 Oct 41. In action with and drove off E-Boats attacking Convoy FS615.

19 Feb 42. In action with E-Boats attacking southbound Methil to Southend convoy. A torpedo fired from an E-boat passed close to the Mendip.

18 Aug 1942.Escorted Landing Craft to Dieppe on the French coast.

The Royal Navy lost 550 men. But it was the troops, mainly Canadian which suffered most  with Canadians bore the brunt of the casualties at Dieppe, with 907 killed, 2,460 wounded and 1,874 taken prisoner by the Germans. These very brave men weren’t even given a medal for their sacrifice as the official line was “there will be no medals for a defeat!”

RAF pilot, who’s plane had been shot down over Dieppe, being rescued by Destroyer.

9 Nov 42.In action in defence of convoy off Great Yarmouth under E-Boat attacks.

12 Dec 42. Together with HMS Meynell in action against E-Boat attacks while escorting convoy.

25 Jan 43.In action against E Boats with HMS Windsor in defence of coastal convoy off Great Yarmouth.

4 March 43. In action with HMS Southdown and HM Sheldrake against E-Boats off Great Yarmouth. On their return the RAF caught up with the E-boats at dawn and bombed them. E-boats S70 and S75 were both sunk outside Ijmuiden.

28 March 43.Together with HMS Blencathra, MGB321 and MGB 333 was in action with and drove off E-Boats which were attacking Convoy FS1074 off Smith's Knoll. March was a costly month for the German E-boats, not only were they being successfully driven away from the British convoys but the war had been taken to them. The British 58th MTB (Motor Torpedo Boat) was successfully attacking German convoys north of the Dutch (German occupied) Frisian Islands.

13 June 43.Mendip was escort for a huge convoy, UGS10, of 75 cargo ships many of them Liberty ships and a large convoy of 28 war ships to arrive at Port Said in Egypt (It was combined with Convoy KMF18) Many carried troops for the eventual invasion of Sicily.

28 June 43. The Mendip joined Convoy KMF18 as escort transporting troops and equipment to North Africa in support of Operation Torch. Also escorting the Convoy were nineteen other escorting warships. Operation Torch was the British/American invasion of French North Africa (French Morocco and Algeria.) 29 July 43 UGS12 joined KMS21 and they were now 99 cargo vessels in the giant convoy.

HMS Mendip with HMS Blencathra (although in the Mediterranean were still nominally part of Sheerness 21st Destroyer Flotilla) travelled to Algiers in preparation to support Operation Husky, (10 July 1943 to 17 August) the invasion of Sicily.

10 July 43.Deployed to provide AA cover during landings and for patrols in defence against attack by surface vessels and U-boats. The American destroyer USS Maddox, the Landing Ship Tank LST 313, the Minesweeper USS Sentinel and the hospital ship Talamba were all sunk from air attack. On the following day more ships were damaged and sunk.

20 July 43.HMS Mendip was released from Operation Husky and returned  to Algiers for convoy escort duty.

6 Aug 43.  In port at Bizerta, Tunisia for a boiler clean and much need leave for her crew.

7 Sep 44.Joined HMS BRECON and HMS BLANKNEY as escort for convoy for Operation Avalanche the invasion of German occupied Italy at Salerno on the 9 September 1943.

11 Sep 43. Came under air attack while approaching Salerno and sustained damage from a near miss from a bomb. Machinery including port shaft was affected but ship remained operational. Provided naval gunfire support during landings.​

17 March 44. The Mendip was escorting convoy SNF17 from Naples to Oran in Algeria with HMS Catterick when the convoy was attacked by the German U-boat U371 off Bougie, near Algiers. Dutch Troop Ship Dempo was sunk with out the loss of life of the 330 people on board. The American ship the Maiden Creek was badly damaged when torpedoed with the loss of eight of the 78 people on board.  The Maiden Creek was beached at Bougie but broke her back.

20 March 44.Boiler clean at Algiers and a much need break for her crew.

4 May 44.Deployed with HMS Blankney as escort for convoy from Algiers to Gibraltar.

5 May 44.  The Mendip was attacked by a U-Boat off Alboran close to the Strait of Gibraltar.  With HMS Hambledon and HMS Blencathra took part in anti-submarine operations.
This would be the last action in the Mediterranean for all of these destroyers as they would imminently be returning to the U.K. to take part in the D-day landing.

26 May 44.Re-joined the 21st Destroyer Flotilla at Sheerness. Immediately took passage to Milford Haven to join the 111th Escort Group for convoy escort.

It did not go well for the American forces at Omaha Beach and heavy casualties were inflicted on them by the defending enemy.

The assault force had suffered from rough seas as they traversed eleven miles of open sea in their Landing Craft. Of the 32 amphibious tanks which were the vanguard of the assault, only five remained afloat. Of the 50 howitzers to support the infantry only 18 survived, the rest sinking to the Ducks transporting to shore. Landing craft especially equipped with men and gear to clear the beach obstacles, the mines attached to them and the booby traps also sank with disastrous results.

Only a few gaps could be opened through the lethal obstacle barrier resulting in bottle necks were landing craft built up into an unorganised jam.

The preliminary bombardment was in effected with gun emplacements and machined gun pillboxes being operational. There were no bomb or shell craters on the wide exposed beach in which to seek shelter. The soldiers of the American 1st and 29th Divisions were trapped at the water’s edge being raked by machine gun, mortars and small arms fire.

This deplorable situation was in part alleviated twelve Destroyers, amongst these HMS Mendip (a Sheerness Destroyers) which sailed right up to the beaches to give the beleaguered army close support, knocking artillery emplacements, machine gun pillboxes and Germen infantry emplacements.

7 June 44. The Susan B. Anthony detonated an Oyster mine and sunk off Omaha Beach. The Mendip took part in the rescue and saved 400 of the 2,689 troops and crew on board some of who were wounded. They were later transferred to landing craft and transported to shore.

8- 24 June 44.Escort duties with convoys from Plymouth to Omaha Beach during build up phase of Normandy landings.

15 Nov 44.Ran over a mooring Buoy during work-up at Scapa Flow and damaged both screws and ASDIC (underwater detection equipment) Dome. Both screws required replacing.

28 Nov 44. With her sister ship HMS Garth Escorted military convoys to Antwerp after the Scheldt Estuary had been cleared of mines by the Queenborough Minesweepers. (First convoy arrived at Antwerp 30 Nov 44)

21 Jan 45. Sustained underwater damage when she ran aground. Repaired at Chatham Dockyards.

21 Feb 45. The Garth with the Mendip and Motor Gun boats were in action with German E-boats. The E-boats were laying mines and two days later the La Combattante detonated a mine, broke in two and sunk off Croma Norfolk. Sixty-eight of her crew were lost. One hundred and seventeen survivors were rescued by Motor Torpedo Boats HMS MTB 763 and HMS MTB 770. It was later claimed that La Combattante was sunk by a torpedo from a “Seehound” midget submarine.

July 45.Nominated for duty in the Clyde for destruction of surrendered U-Boats. Escorted U-boats into port.

Jan 46. Returned to Sheerness for the last time and was paid off.

9th Nov 49.Sold to Egypt and renamed the Mohammed Ali.

1951.She was again renamed as the Ibrahim Awal and took part in the war against Israel.

31 October 1956.She was captured in battle on by the Israeli Navy and re-commissioned as INS Haifa (K-38).

1972. After a long and illustrious career she was scrapped.