BADGE
​On a Field Red, an escallop Gold charged with a fox's mask Red.

HMS Meynell was laid down on 10th August 1939 and launched on 7th June 1940 and completed on 30th December 1940, taking over a year and four months to build. Previous Hunt Class Destroyers had taken around a year to build and completion of the Meynell was delayed due to the urgency of repair work on ships damaged at Narvik and Dunkirk. 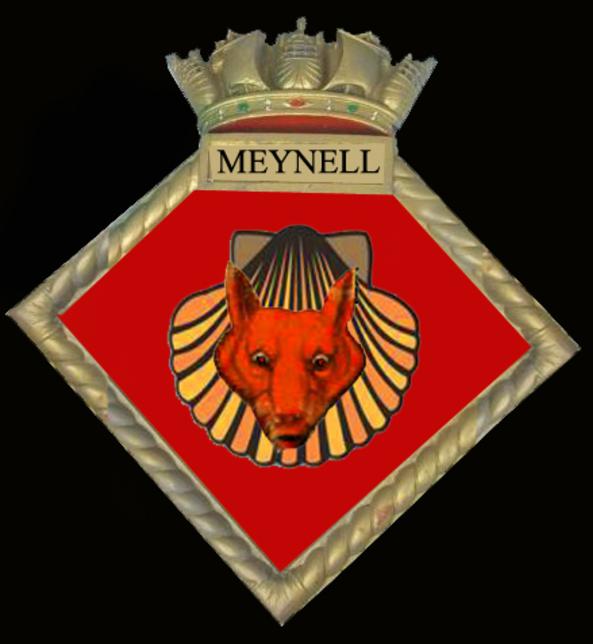 Not completed until December 1940 HMS Meynell was not around to take part in the Dunkirk Evacuations.

1st Feb 41. HMS Meynell made passage to Sheerness to join the 21ST Destroyer Flotilla for escort and patrol duties in the North Sea and English Channel.

3rd Feb 41. HMS Meynell escorted HM Auxiliary Minelayer Teviot Bank to reinforce the East Coast Mine Barrier to better suit anti-invasion requirements. Mine laying operations were often targeted by the Luftwaffe (German Airforce) and only a month later the Teviot Bank was damaged by a near miss from bombs.

7th Feb 41. Returned to Sheerness to continue escort and patrol duties in the North Sea and English Channel with the 21ST Destroyer Flotilla.

March 41.  A 20mm Bofors gun was fitted in bow structure for defence against E-boats.

25 March 41. HMS Meynell rescued three Dutchmen who had escaped from German occupied Holland. They were drifting in a small boat near the Sunk Lightship. They were transferred to the Harwich Minesweeper which took them to Harwich while Meynell continued on with her escort duties.

When the order came to attack the German Battle Fleet the Meynell like many other Destroyers, Motor Torpedo boats and Bombers were given insufficient notice. By the time the Meynell raised steam she was too far behind to catch the German armada.

1942 throughout  and 1943. HMS Meynell continued with her escort duties escorting ships along the East Coast through  the notorious “E-boat Alley”. These journeys were not without incident as attack by E-boats, from the air or the sinking of ships by mines were a common occurrence.

15 Feb 43.HMS Meynell escorted Russian Convoy JW53 which departed Loch Ewe in Scotland and arrived at the Kola Inlet, Northern Russia on the 27 Feb 43. The Convoy consisted of 28 Merchant ships, mainly Liberty ships carrying guns, planes and war materials to help Russia fight against the Germans.  It also contained a massive 47 war ships escorting the cargo ships. Six merchant ships turned back because of the severe weather. The Russian convoys were attacked mercilessly from the air and by U-boats. Survival of a man in the freezing sea was measured in minutes.

1st March 43.HMS Meynell escorted Russian Convoy RA53 which departed the Kola Inlet, Russia on the 1st March 43 and arrived at Loch Ewe on the 14 March 43. The convoy consisted of 30 Merchant ships and 36 war ships. Many of the ships returned with cargos of timber and ore. The convoy was attacked by the enemy again with four American ships being sunk. The cargo ship Executive was torpedoed and sunk by U 255 with the loss of nine of her 62 crew. The Puerto Rican was sunk when she straggled behind the convoy and was torpedoed and sunk with the loss of 64 of her 65 crew. The lone survivor was rescued by HMT St. Elstan. The Richard Bland was torpedoed on 10 March by U-255 and split in two. The stern section sank with the loss of 34 of her 69 crew, the bow section was towed to Akureyri in Iceland. The American Liberty ship J L M CURRY foundered in a storm. This was perhaps a forewarning of the Liberty ship weaknesses. They were constructed from poor quality steel and cold weather, such as that found in the North Atlantic Ocean or the Arctic, made it brittle. Liberty ships were welded and not riveted and once a crack started there was nothing to stop it.

For the rest of 1943 HMS Meynell continued with North Sea Convoy escort and patrol.

25 Feb 44. In action against E-Boats off Great Yarmouth in defence of convoy.  A crew members account related four groups of two ‘E’ boats attacking on each side of HMS Meynell. Torpedo launched at the Meynell sped towards her with one passing right beneath her bow having been too deep to make contact. To read the first-hand account go here, http://www.bbc.co.uk/history/ww2peopleswar/stories/40/a8501140.shtml

6 June 44.  D-day. HMS Meynell escorted the first “Follow up” convoy EMT1 departing Southend anchorage on the 6 June 44 arriving at the D-day beaches on the 7 June 1944. As the D-day invasion force was nearing the beach, Force L sailing group 1 and 2, consisting of 65 landing craft and ships with escorts left Harwich to rendezvous with group 3, 4 and 5 from the Thames Estuary. The ships from the Southend anchorage consisted of 65 landing ships and craft and 65 more cargo ships mainly carrying vehicles, 3 cable ships and the escorts Meynell, Garth, Chelmer, Halstead, Camelia, Charlock, Narcissis, Gardenia, Oxlip and 20 Queenborough Motor Minesweepers.

As the convoy passed through the Straights of Dover it was shelled from German occupied France. The British Liberty ship Sambut was hit and burnt out. There was little the escorts could do other than to make smoke to hide their charges.

Remainder of June.Continuation with escort duties in build-up phase of the Normandy invasion.

5 July 44.HMS Meynell was released from Operation Neptune (the navy side of D-day) and returned to Sheerness for North Sea patrol and convoy duties.

1 Oct 44. The Meynell together with HMS Cottesmore and HMS Garth were to escort HM Monitors Erebus and Roberts during passage to Walcheren Island for bombardment of enemy positions. It was important to clear the enemy from the banks of the Scheldt Estury to allow the Queenborough minesweepers to open the Port of Antwerp.

The Meynell passed on the wrong side of a buoy, fouled a sunken ship and suffered major damage to her starboard shaft and propeller. Meynell was towed to London to have the propeller repaired.

March 45.Re-joined the 21st Flotilla at Sheerness and continued with escort and patrol duties 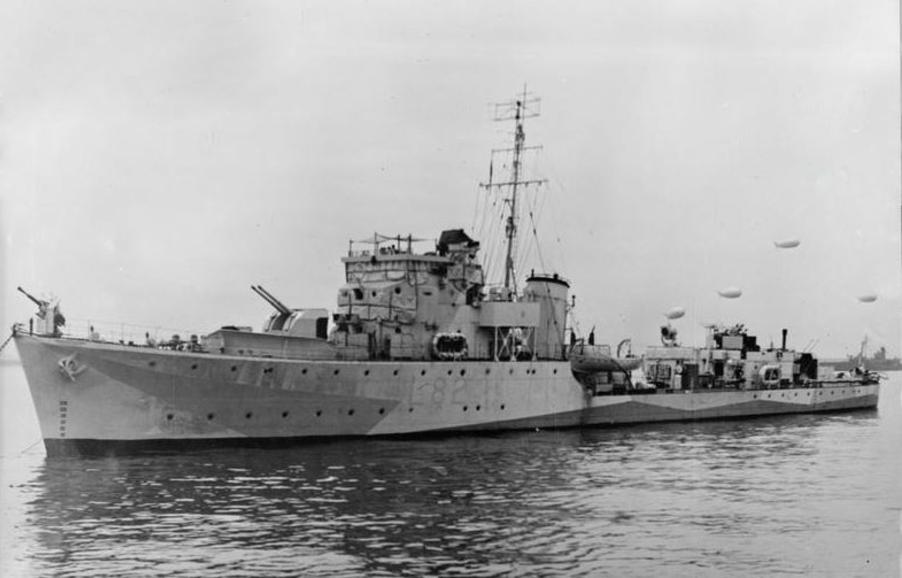 HMS Meynell at Sheerness, Isle of Sheppey, Kent. Note the “Bow Chaser” gun used for E-boat action and the Barrage Balloons in the background.