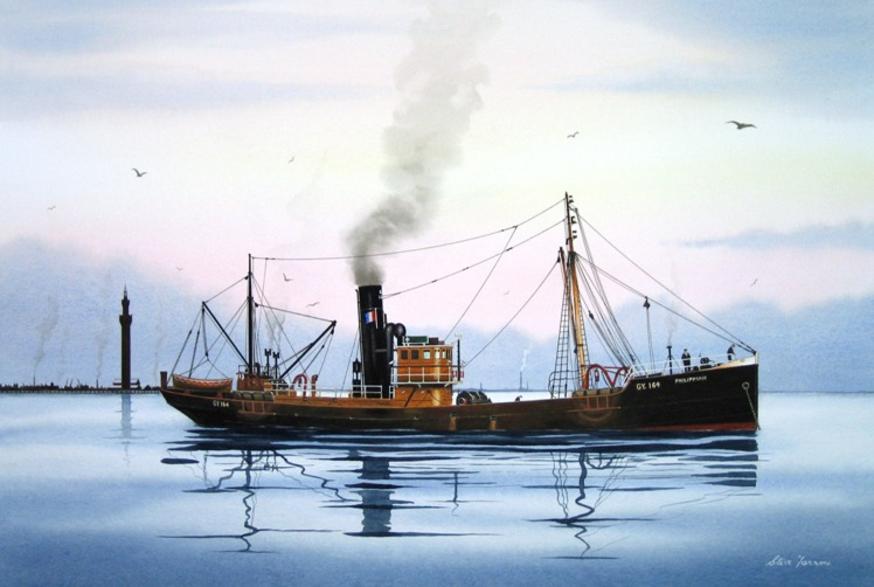 Aug 1939. Requisitioned by the Admiralty as a Minesweeper.

April 1944 to December 45, Milford Prince operated as a Danlayer.

To find out more of the Invercauld movements go to DRIFTERS AND TRAWLERS.

The 6th Minesweeping Flotilla, to which the Milford Prince was attached, consisted of Algerian Class minesweepers which preceded the War Ships and Landing Vessel to the Normandy, D-day Landing Beaches. The 6th Minesweeping Flotilla swept channel 5 with the Milford Prince marking the edge of the swept channel leading up to Gold Beach.

Ahead of schedule, all minesweepers were required to make a complicated manoeuvre in the middle of the minefield which was designed to lose time. The 6th flotilla was unable to lose as much time as planned because the leading landing craft in channel 5 were too close and ahead of program. In sight of the French coast the 6th flotilla was forced to reduce speed to 6 knots.

During the crossing and the approach to the D-day beaches the weather was heavy and this caused some difficulty for the Danlayers. Some Dan lights were smashed when launching, but the reserve Danlayers filled the gaps. All channels were well marked and the Assault Forces found them easy to follow.

Despite the poor weather all Minesweeping Flotilla succeeded in laying their terminal dans within a cables length (608 feet, 185.32 metres) of the assigned positions and within a few minutes of the planned time.

Milford Prince, after WW2.
From the West Wales Guardian of  Friday 31st January 1947:

With his clothing and boots smouldering as he crawled across the red hot furnace to make temporary repairs to leaking boiler tubes, Chief Engineer J. R. Jones, 6, Warwick Road, undoubtedly saved the trawler "Milford Prince" as she drifted helplessly in a south-easterly gale.  The trawler had been fishing off the south Irish coast.

The story of Mr Jones' bravery was told by the skipper, Mr Riches of Yarmouth, when the "Prince" limped into Berehaven harbour in west Cork.  The vessel got into difficulties in the gale about seventy miles off the coast on Wednesday night.  Skipper Riches said, "We were helplessly drifting, shipping tons of water and completely at the mercy of the gale.  We sent out an SOS to all shipping, but after we had drifted about ten miles with no response, the chief engineer volunteered to attempt to carry out temporary repairs to the leaking boiler tubes.  We laid boards across the furnace, which was still red hot, and [ he ] entered the boiler still partly filled with steam.  Despite the boards, he had his clothing and boots burnt.  He succeeded in carrying out temporary repairs and we were able to get the ship moving again.  But for his bravery we might not have lived to tell the tale."

From the West Wales Guardian of Friday 8th December 1950:

Two of the remaining steam trawlers in the Milford Steam Trawling Company fleet have been sold to Grimsby firms.  The first, the Milford Prince, left on Wednesday for the East Coast with a Grimsby crew.  The second, the Milford Princess, is now in dry dock after undergoing extensive repairs, and will leave for Grimsby shortly.

The Princess, it will be remembered, was nearly overwhelmed by a huge sea 12 months ago.  The top of her wheelhouse was washed away, and the skipper, Mr. Jack Thomas, and others of the crew had narrow escapes.  The Milford Steam Trawling Company now has a fleet of six diesel trawlers, and one remaining steam vessel, the Milford King.

Even before the start of World War Two the Milford Prince was requisitioned by the Admiralty and converted into a Minesweeper. Operating out of Wildfire III, Queenborough, she swept the Thames Estuary and North Sea shipping lanes clear of mines.

Later in the war the Milford Prince was converted into a Danlayer, just in time for D-day.

Dan Layers were usually former Trawlers or Drifters (fishing vessel) equipped for laying Dan buoys and accompanied minesweepers. They laid Dan buoys to mark the swept lanes, assuring there were no overlaps or missed areas.

Dan buoys are marker buoys consisting of a long pole designed to float vertically, with a flag and sometimes a light on top which are moored to the sea bed.

Leading the great naval invasion force on the night before D-day were the minesweepers. The Milford Prince was part of the sixth Minesweeping Flotilla which swept channel 5.

Milford Prince laid Dan buoys along the edge of channel five leading up to Gold Beach allowing the D-day invasion fleet to pass through the minefields safely.