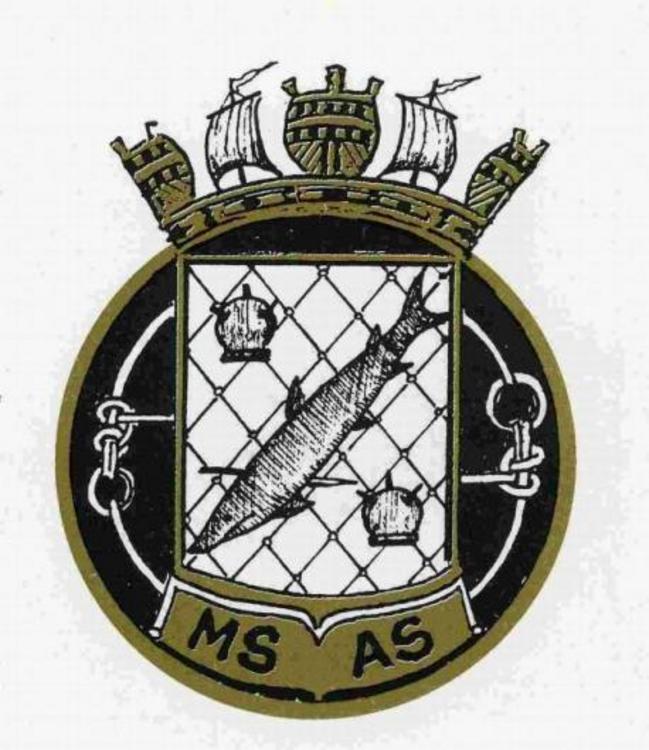 The Royal Naval Patrol Service earnt its own unique badge. This was awarded to the men of the minesweepers and anti-submarine trawlers in recognition of their service on these vessels.

It was exclusive the Royal Naval Patrol Service and could not be worn by other Royal Navy personnel. It was only awarded after six months service at sea, so land-based sailors could not get it.

It is a silver badge about the size of a two pence piece. In the shape of a shield, it shows a sinking shark transfixed by a marlin spike which represents the anti-submarine service. In the background, a net containing two trapped mines, represents the minesweepers. This is surrounded by a rope with a fisherman’s bend knot on each side, a crown above and a scroll below with the letters MS AS for Mine Sweeper and Anti-Submarine.

Today it is often wrongly referred to as a lapel badge, but a naval rating uniform has no lapels! The MS AS Badge was worn on the left sleeve, four inches above the cuff. When a Patrol Service rating became an officer, he could still wear it on his officers’ uniform.

The MS AS Badge became a prized “medal” of World War Two, valued above all other decorations the wearer might earn and his proudest passion.