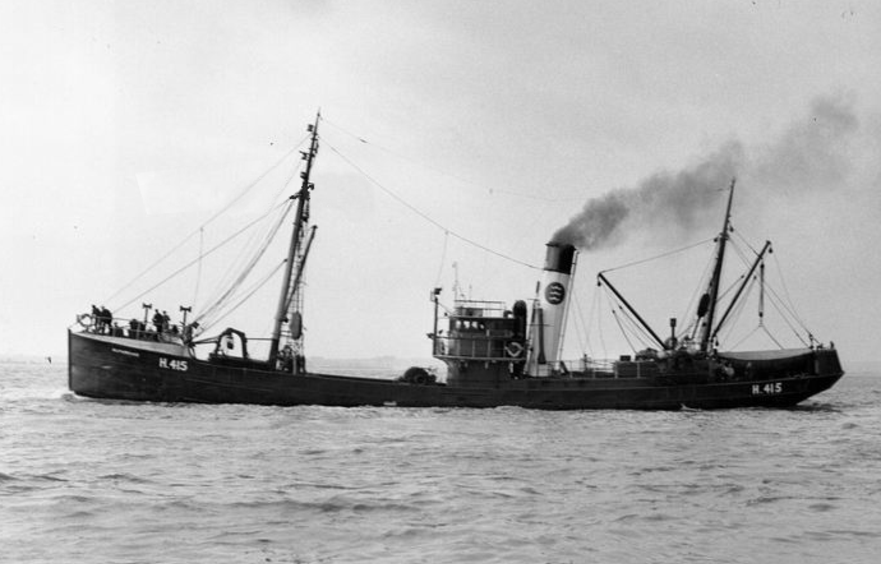 August 1940. With Hitler now fully in control of Western Continental Europe and with Luftwaffe airfields in Holland and France the war on the East Coast would be massively intensified.  German He 111’s and Ju 88 aircraft continued minelaying and bombing. With as yet no sea borne Barrage Balloons Junkers Ju 87, (Stuka Dive bombers) came right down to sea level to strafe and machine gun shipping and even survivors in the sea.

Aug 12 1940. The Luftwaffe made an all-out attack on South East England bombing R.A.F. airfields and numerous coastal radar installations before turning their attentions to shipping in the English Channel and the Thames Estuary.

The Wildfire III, Queenborough, minesweepers were sweeping off the North Foreland four miles north of Margate. Their crews mindful that only the day before a sister minesweeper from Queenborough was bombed with the loss of three of her crew and three wounded. In the afternoon, Stuka Dive bombers appeared overhead. These were led by Captain von Brauchitsch son of Field Marshal Heinrich von Brauchitsch Chief of Staff of the Germany Army. They swooped on Queenborough Minesweeping Group 2, concentrating on the Pyrope and Tamarisk. Both ships were sunk with the loss of six of the Pyrope’s crew and seven of the Tamarisk’s crew. After abandoning ship, the survivors were machined gunned in the sea.

The R.A.F. arrived in time to allow the Margate Lifeboat to pick up survivors.

On the 11th August and H.M. Destroyer Windsor was damaged in the Thames Estuary on the same day. H.M. Trawlers Edwardian and Peter Carey were also damaged off the Thames Estuary on the 11th August, the former so seriously that she had to be beached and had three killed and three wounded. She shot down one aircraft for certain and possibly two. On the 12th August H.M. Trawlers Tamarisk and Pyrope were sunk by bombs in the same area, in each ship 6 men were killed or missing, the Pyrope having 1 wounded and the Tamarisk three.

Crews of two former Hull trawlers Pyrope and Tamarisk, announced by the Admiralty as having been sunk through enemy action, were machine gunned in the water by German bombers. A member of the crew of the Pyrope said yesterday.

While the trawler was heeling over, they continued to drop their bombs around her. All of us were wearing lifebelts, and grabbed hold of what wreckage we could to give more support. The Germans kept on machine-gunning us as we floated in the water, and our ship sank in less than two minutes. “You should have heard the cheering when our Spitfires turned up and brought a raider down close to us. It dived into the sea and exploded, and nothing more was seen of it or of the crew. No-one was more cheery than Seaman Thomas Anderson, a little ‘Geordie’ who was badly injured and died about two hours after we got ashore.”

This is the Almandine H415. The Pyrope was built to exactly the same design.

Aug 1939. The Pyrope was requisitioned by the Admiralty and converted to a minesweeper.

August 12th 1940, HMT Pyrope, was sunk in an air raid by German aircraft in the Thames estuary, off the North East Spit buoy.

To find out more of the Pyrope’s movements go to DRIFTERS AND TRAWLERS.