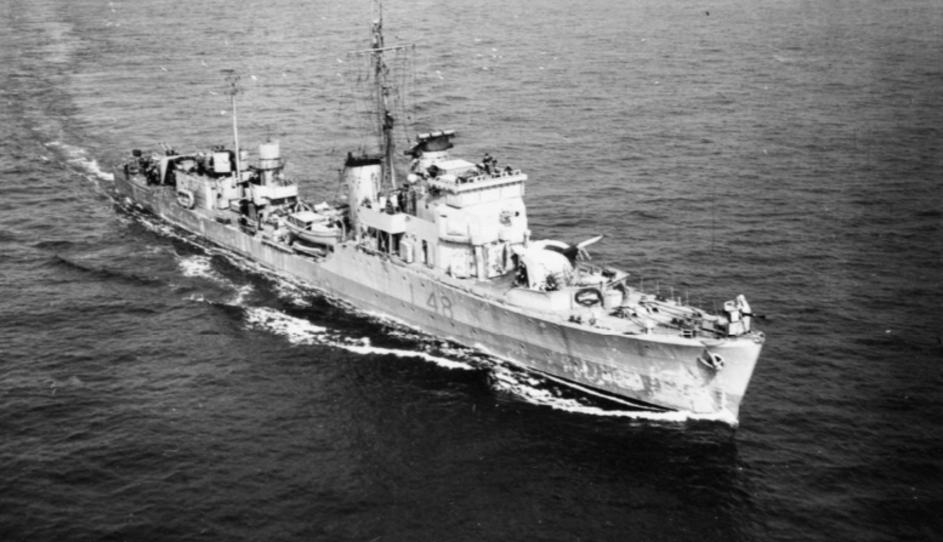 I joined the ship in May 1944 at Blackwell docks. The ship had been refitted after having her stern blown off by a mine off the east coast. The new crew assembled on the dockside and the CO read out the Articles of War and AFO's after which we trooped aboard to see what our new home was like, in my case 2 years, and we steamed down the Thames to war.

Our job was, as I expect you know, was far north and south convoys up and down the east coast, patrols in the North Sea along the Dutch coast, also escorting troops to the Normandy Beachhead, where a couple of times we dropped the hook for a day or 2, providing air cover.

13 AUG 2009. As you asked, I can explain a little about officer courses. The CW candidates were ratings selected as potential officers. They wore the same normal square rig "bellbottoms and blue collars", but instead of a ship's tally they wore a white band around their asked, they finished the course they were commissioned as Midshipmen.

20 Dec 2009. I think there were only 4 ship's badges and if I have one as well as you do, I wonder what else was liberated' To my knowledge there were only 5,2 of which were in the motor boat and 2 each side of the whaler (sea boat), so maybe there was one in the office.

I think the Iron Cross that you have was from Kiel as I remember, at the end of the war we called into Cuxhaven, and Wilhelmshaven and we could get a run ashore provided that you weren't on Duty Watch. On one occasion we steamed up the canal via Hamburg to Kiel, the canal being very narrow in those days. I remember Kiel well as we both went ashore together and your Dad scrounged 2 Lugers with a fair amount of ammo, and if we had been rumbled with them hidden on board there would have been hell to pay.

09 Feb 2010. The patrols the winter of 1944 were dreadful. Up and down the entire East Coast four hours on four off for days and days on end, when coming off duty we just took our seaboots off and crashed onto the lockers and prayed you weren't called to action stations. Your Dad's action station was with the depth charges, on the quarter deck quite near to me on 2 guns.

09 APR 2010. I just thought of a story that will be of interest. I know that our ship didn't have a very spectacular history when Derek and I were aboard, but we did have some skirmishes with E-Boats, and we sank a blockade runner and although I've scoured as many records as possible, I can't find a trace about it.

While on patrol off the Dutch coast on a pitch-black night we crept up to this ship and suddenly switched on our searchlight and we saw she was flying the German Ensign. We opened fire immediately and started to knock seven bells out of her but then ceased fire as there was no retaliation. We started to lower the whaler with an armed boarding party, but just as we were about to get the whaler away there were two almighty explosions and she went to the bottom, Derek would have had a grandstand view from the quarter deck. We picked up a few survivors and disembarked at Sheerness and it was generally thought she had been carrying ammunition.

We were the 2nd Destroyer up the river to Rotterdam after the Germans had pulled out. We tied up at the key side and it was packed full of civilians who were starving, seems hard to believe but it's true. I really wish I had had a video camera in those days, and people could have seen what it was like to be occupied. After eating our meals, we used to put all the scraps on a big dish which they took. They begged for soap food coffee tea anything really, but it was cigarettes they really needed as that was the currency so to speak. We were told that some people had been eating daffodils to stay alive.

11 NOV 2010. Your Dad's main job was working for the Captain as his secretary but he also read and sent letters for some of the boys who couldn't read or write, but he was also an AB and as such he was involved in all types of seamanship, including cooking for the mess when it was his turn. Once it was ready there would be a pipe of ' cooks to the galley' he would have to collect it and take it down through the hatch to the mess deck, which was all over the place in heavy weather, and the leading hand would make sure everyone got the same amount, clacker we called the pies.

16 APR 2011. Just after the end of the war we were called back to England to be part of the escort to take President Truman to Antwerp. Three Destroyers HMS Garth HMS Hambledon and us. We approached and picked up steam to meet the two American battle wagons Augustus and Philadelphia. As we drew level we turned hard ‘a starboard with the port engine full ahead and the starboard engine full astern. The then turned on a sixpence as we saluted the Augustus. Their band was playing ‘Stars and Stripes' and all the yankee sailors were leaning over the guard rail while we tried to stand to attention.

I can remember the Queen of Denmark came on board in civvies and was almost chucked off as there was a strict no woman on ship rule. 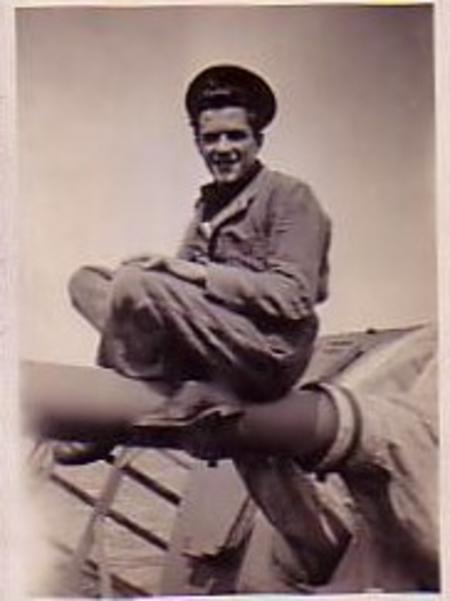 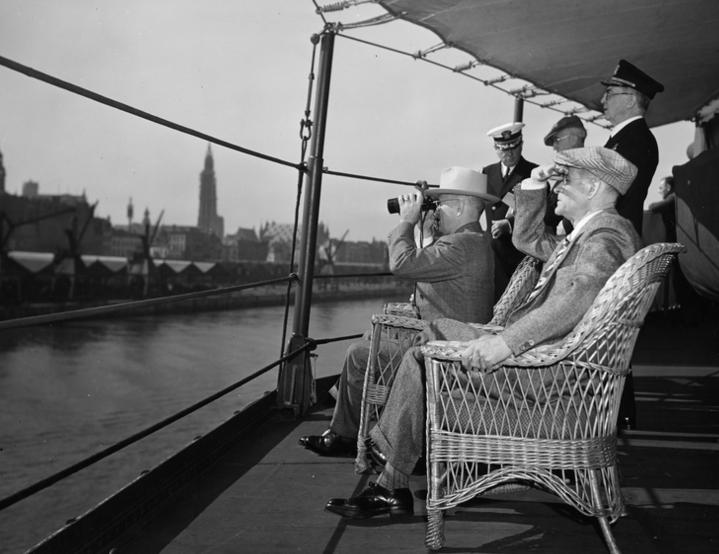 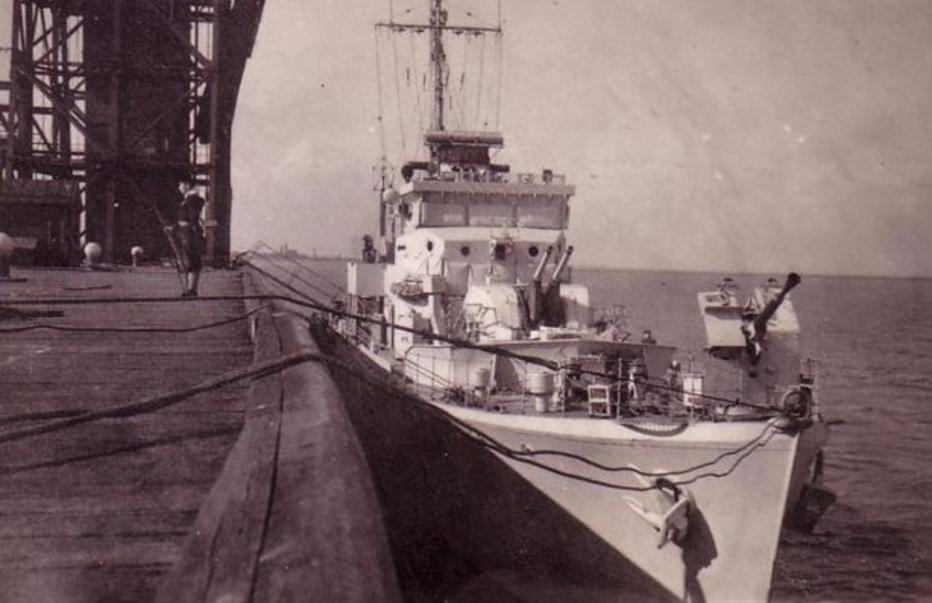 (Information from a series of emails between Quentin and the son of an old ship mate.)

12 JUL 2009. I have just picked up your message re the ship, I knew your Dad very well, and I hope he is still with us. I'm sure he will remember me, 'Gus' and it would be nice to hear from him.

12 JUL 2009. I hope you got my previous message. I have been looking through some old photos and I have one of your Dad, and yes, I nicked a ship's badge as well!!