Aug 1939: Requisitioned by the Admiralty and converted to a minesweeper.

July 1941: Re-requisitioned and again converted to a minesweeper. This is certainly when she would have been sent to Wildfire III, Queenborough.

20 Feb 1953: The Richard Crofts (Fishing Vessel) ran aground and sank with the loss of eight of her crew including her Captain who had survived WW2 as a Minesweeper Skipper.

To find out more of the Richard Croft’s movements go to DRIFTERS AND TRAWLERS.

The Loss of the Richard Crofts.

Eight members of the crew of 12 are believed to have died when the Milford Haven trawler Richard Crofts, 290 tons, sank after running aground in fog on a reef off the Argyllshire island of Coll early yesterday.

The Richard Crofts left Milford on a fishing voyage last Saturday in charge of Skipper Harry Rich, one of the port's youngest skippers, who served as an officer in minesweepers during the war.  His crew were all local men.

The trawler ran bow on to rocks in high seas and a strong wind, and radioed for assistance.  The Barra lifeboat was launched, and ships in the area altered course to go to the scene.

A tug stationed in the Hebrides went to the aid of the trawler and stood by.  The Devonport-based frigate Relentless left Londonderry to go to the spot.  Aircraft searched for survivors.

A fireman, J. Vliestra, swam from the wreck and reached the shore almost unconscious.  He had stayed behind with the skipper until the trawler went down.  Both tried to swim ashore together, but the skipper failed.  His body was recovered later.

Two other survivors, R. J. Davies, second engineer, and Thomas Donovan, deckhand, were rescued by breeches buoy from a small rock on which their raft struck.  Donovan's leg was smashed by the seas while he was being rescued.  The fourth survivor, H. M. Jones, fireman, swam ashore later.  All were treated for shock and exposure.​

Built for the Admiralty to be a Minesweeper in World War One, the Richard Croft was completed too late to take part.

On the 30 September 1938 British Prime Minister Neville Chamberlain returned to England waving a piece of paper and declaring “Peace in our time.” Even so, the Royal Navy was quietly preparing for War. Two months previously the Fishing Vessel, Richard Crofts had been requisitioned by the Admiralty and converted to a minesweeper.

Built to a standard Admiralty design the “Castle Class” Admiralty Trawler, the Richard Crofts was firstly based at Liverpool, but by 1942 she was working out of Wildfire III, Queenborough. She was sweeping mines from the Thames Estuary and the East Coast which was probably the most heavily mined area in the World with over 300 ships being lost in the Thames Estuary alone, mainly due to mines. 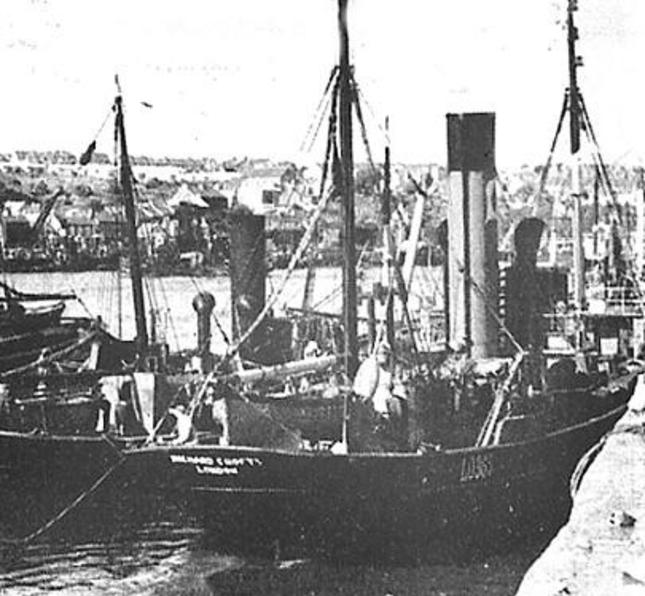