The Richard Bane was a purpose built, Castle Class Minesweeper, later to be renamed the Rudilias. Built to Admiralty specifications, she was cancelled when World War One came to an end. She was completed and used as a fishing Trawler between the wars.

When World War Two commenced she was requisitioned by the Admiralty and converted to a minesweeper. Although requisitioned in September 1939 she continued fishing while waiting to be converted into a minesweeper. During this time, she is recorded as landing a record catch of herring. Her conversion to a minesweeper was further delayed after the Dunkirk Evacuation as all the Dockyards were fully occupied repairing vessels damaged while rescuing troops.

Later in the war it is thought she was converted into an “Esso , a fuel carrier. With purpose built wooden minesweeper (Motor Mine Sweeper and British Yard Mine Sweeper) being introduced, which were safer when sweeping for magnetic mines, many of the older trawlers were transferred to other duties. One such duty was as a fuel carrier. A large number of trawlers were converted to fuel carriers leading up to D-day where they were used to refuel vessels off the Normandy Beaches. 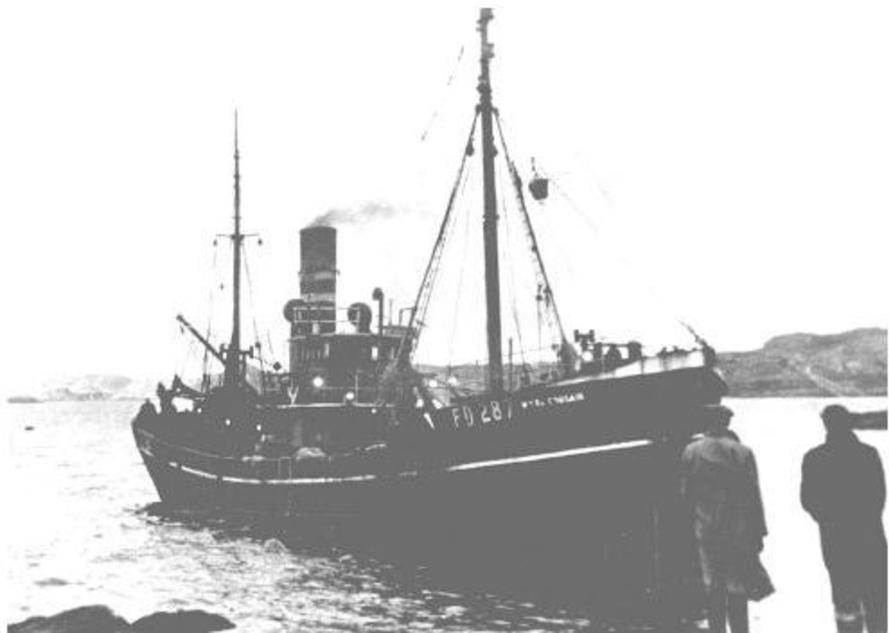 1918. Ordered by the Admiralty and lied down as a Castle Class Minesweeper, named the Richard Bane.

1919. Order cancelled. Completed and sold as a Fishing Vessel. Renamed the Kyoto (After the capital of Japan in until 1868) Acquired by Hakin TLC of Milford Haven.

1938, Acquired by Westwart Trs. of Milford Haven and renamed Rudilais.

September 1939. The Rudilias was requisitioned by the Admiralty and converted to a minesweeper. (Hire rate £91.13.0d/month).

30 Sep 1940; Possibly continued to fish until this date as the following would seem to suggest. In 1940, the trawl fishery for herrings off the Old Head of Kinsale was the heaviest known.  One trawler, the Rudilais, Skipper A. Riby, landed 1019 cwt. of herrings in a single voyage, an all-time record.

1944. Possibly an Esso (fuel Carrier). When the purpose built minesweepers (MMS and BYMS) became available many of the Trawlers were transferred to other duties. One such duty was as an “Esso”. An Esso was a fuel carriers. Esso’s were at D-day and afterwards, refuelling vessels of every type.

While serving on the Rudilais Skipper Robert Baxter was awarded a MID. He was later awarded a DSC.

To find out more of the Rudilais’s movements go to DRIFTERS AND TRAWLERS.

The Rudilais in 1948 when returned to fishing and renamed the Wyre Corsair, FD 289.