We do not have a photograph of the Soranus, but she would have looked like this Dan Layer, the Sir Galahad.

Sep 1914. Requisitioned by the Admiralty and converted to a minesweeper (Admiralty No.28).

March.1919. Returned to owner at Grimsby.

9th January 1942.  HMS Destroyer VIMIERA when escorting an FS Convoy hit a mine and blew up in the Thames Estuary within sight of Sheerness. The whole ship forward of the aft funnel disintegrated and over 70 died. Wildfire III vessels helped in the rescue of survivors. HMT Soranus rescued eight of her badly wounded crew from the sea. Motor Mine Sweeper MMS 19 rescued 24 men from the stricken vessel and MMS 79 took off three more.

March 1944. The Soranus was fitted out for Dan laying. (This is three months before D-day)

To find out more of the Soranus’s movements go to DRIFTERS AND TRAWLERS.

The Soranus served as a minesweeper in the Nore Command in both WW1 and WW2.

When the destroyer HMS VIMIERA hit a mine and blew up in the Thames Estuary the Soranus rescued eight of her badly wounded crew from the sea.

Later in the war the Soranus was converted into a Danlayer, just in time for D-day.

Dan Layers were usually former Trawlers or Drifters (fishing vessel) equipped for laying Dan buoys and accompanied minesweepers. They laid Dan buoys to mark the swept lanes, assuring there were no overlaps or missed areas.

Dan buoys are marker buoys consisting of a long pole designed to float vertically, with a flag and a light on top which are moored to the sea bed.

It is not known if the Soranus was at D-day, but her sister ship the Milford Prince also based at Wildfire III, Queenborough and converted to a Danlayer at the same time as the Soranus was  at D-day 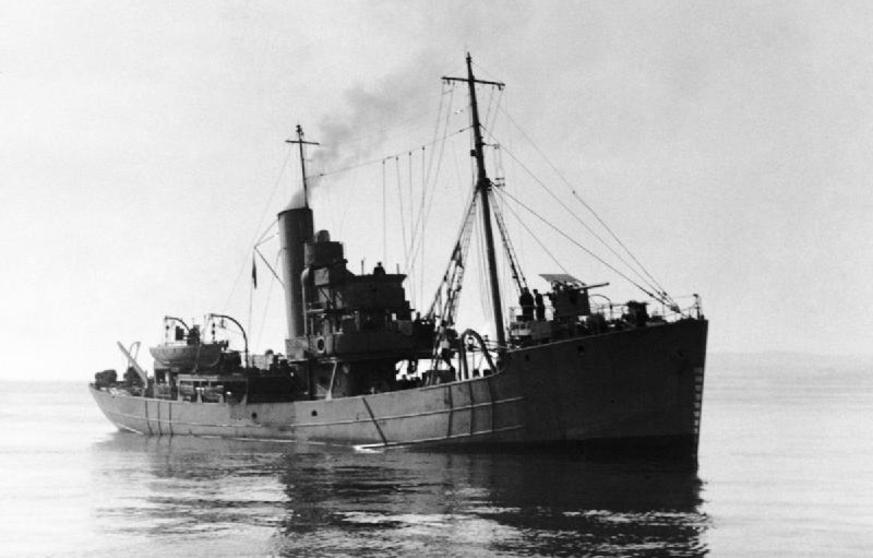