HMT Sunlight. She can be seen flying the Stars and Stripes (America Flag) when she was loaned to the US Navy  and was named UST Thomas Graham.

HMT Sunlight was a Strath Class Trawler built to Admiralty specifications to be used as a minesweeper in World War One. For a short time during WW1 she joined the US Navy and flew the Stars and Stripes.

During World War Two the Sunlight served as Auxiliary Patrol Vessel (Possibly as a Boom defence vessel), a Minesweeper and finally as a Wreck Disposal Vessel where she blew the tops off sunken ships with obsolete mines.

May 1919. On temporary loan to US navy for minesweeping in North Sea.

1921. Sold and renamed Sunlight and operated as a fishing vessel out of Grimsby, England.

November 1939. Requisitioned by the Admiralty and converted to an Auxiliary Patrol Vessel.

May 1940. Converted to a Minesweeper.

April 1944. The Sunlight was converted to a wreck dispersal vessel and based at Grimsby.

15 January 1953. Ran aground and wrecked on the Spur of Murkle, 5 miles east of Thurso, Scotland.

To find out more of the Sunlight's movements go to DRIFTERS AND TRAWLERS.

DISTINGUISHED SERVICE CROSS. A DSC was awarded to Skipper R.N.R., A. A. Hindes.

OFFICER ON NAVY LIST July 40
Not on List. ( but  it is thought Temp Skipper A . A. Hindes RNR was in command)

OFFICER ON NAVY LIST June 41
On list but no officers. ( but it is thought Skipper R. Stephenson RNR was in command) 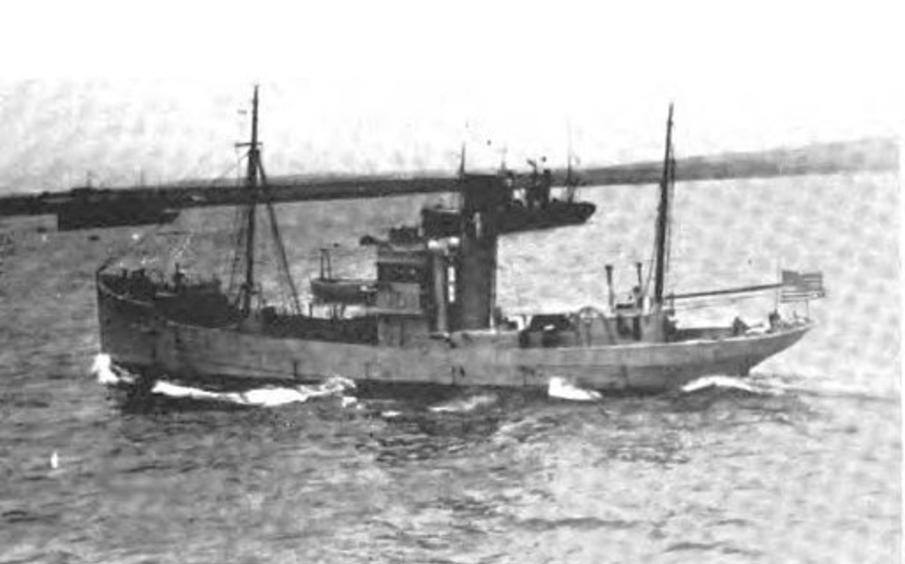