In November 1939 British ships began blowing up in the Thames Estuary near the Tongue Light Vessel. The Minelaying Cruiser Adventure with 62 of her crew injured and 3 killed and the Destroyer Blanch with 12 injured and one killed mysteriously blew up. A search was made for submarines and mines but nothing could be found. Over the next month 14 more ships blew up in the same area.

A new type of mine was suspected and Britain desperately needed find one intact to devise counter measures to it.

On the 22 November a mine dangling from a parachute was seen falling and later found in the mud at Shoeburyness. This was defused by Lieutenant Commander J. D. G. Ouvry. From this LL (double L) minesweeping was developed where a pair of electric cables were towed parallel to each other on floats behind a minesweeper which emit a strong electric pulse generating a magnetic field which detonates magnetic mines.

The Tilly Duff was one of the first vessel to be equipped with the means to sweep for magnetic mines.

Only two months later while many of the vessels from Wildfire III, Queenborough and Wildfire at Sheerness took men off the Dunkirk beaches the Tilly Duff with its magnetic minesweeping gear was too valuable for this and was busily clearing the sea-lanes back to England and the assembly area at Dunkirk where the Luftwaffe repeatedly dropped magnetic mines.

HMT Tilly Duff, one of the first LL (Magnetic Mine) sweepers. 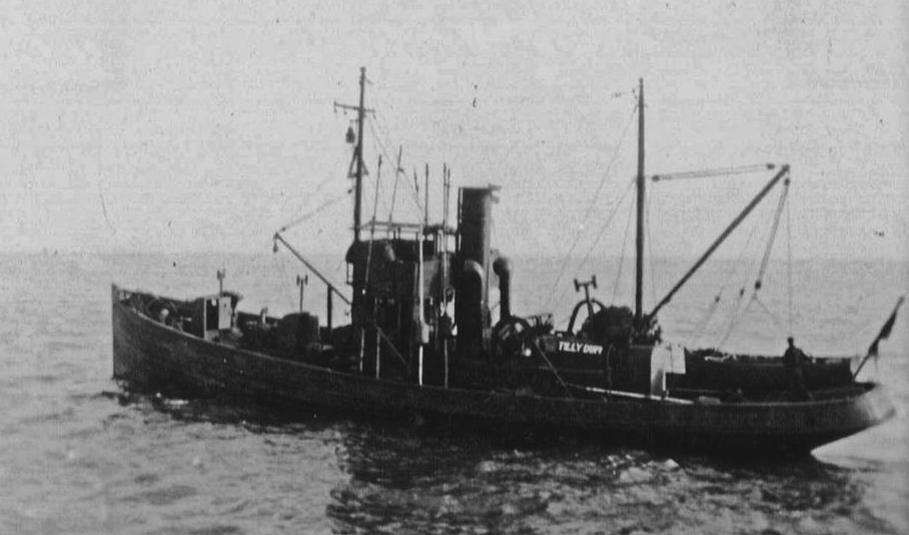 November 1939. The Drifter Tilly Duff was requisitioned by the Admiralty and converted to a Minesweeper.

MENTIONED IN DESPATCHES. Although not on the Tilly Duff at the time, James Lyall McLaren (or possibly James McLyall) went on to be awarded two MID’s.

DISTINGUISHED SERVICE CROSS. A DSC was awarded to Lieutenant Pearce Trewhella Lovelock DSC, RNVR on the 3 Sep 1940 for Minesweeping - DSC awarded for bravery, skill and enterprise in Minesweeping operations off the Coasts of Holland, Belgium and France.

Lieutenant Pearce Trewhella Lovelock  was based at Wildfire III, Queenborough from 26 November 1939  where he took part in minesweeping operations in the North Sea in the drifter TILLY DUFF. During the Dunkirk evacuation he was temporarily in command of the drifter Monarda which made two trips to Dunkirk  and rescued 190 troops.

To find out more of the Tilly Duff’s movements go to DRIFTERS AND TRAWLERS.