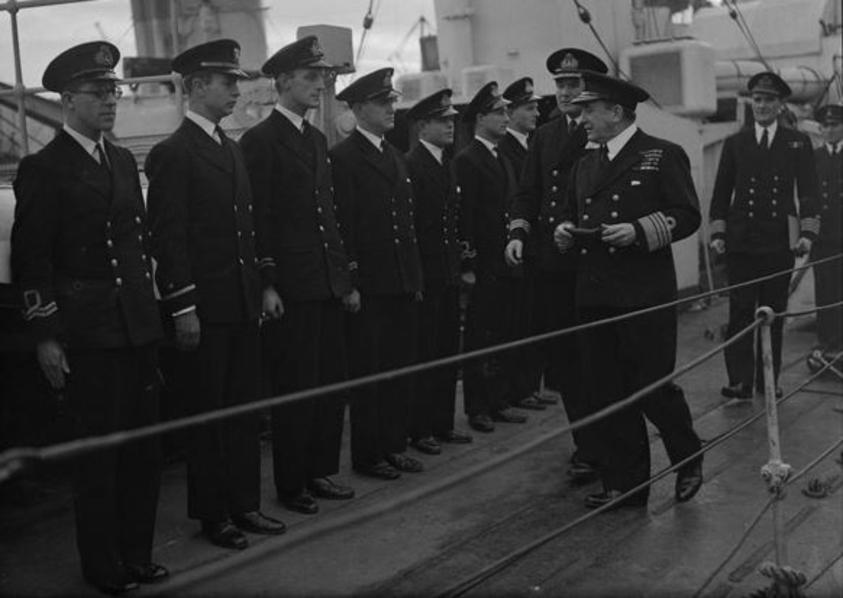 ATLANTIC 1939-43
​(It is not known why HMS Vanessa does not have battle honours for the Channel or the North Sea as she was damaged by near misses from German bombs in both in the Channel and the North Sea.)

On a Field White. a butterfly, Blue. 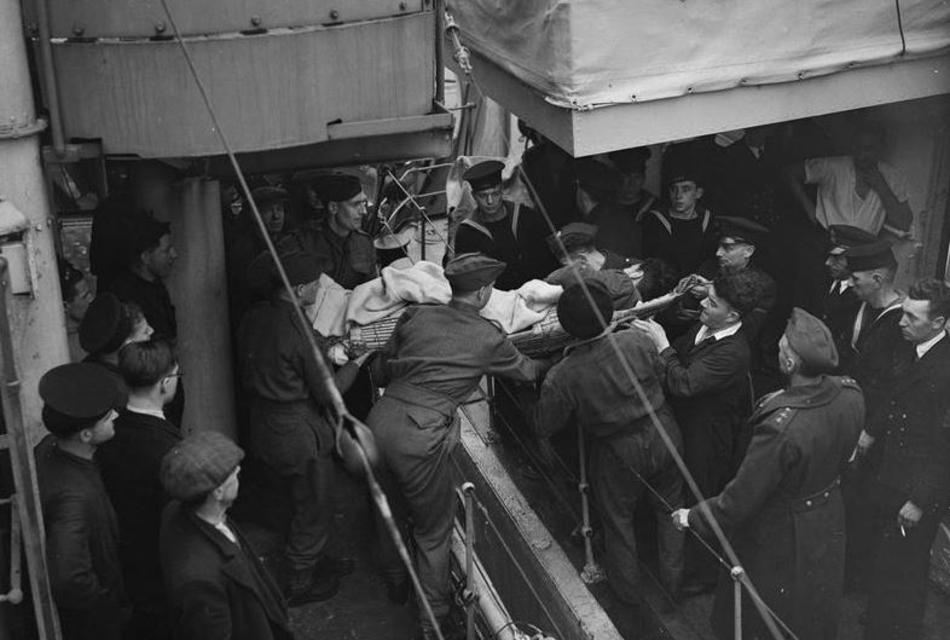 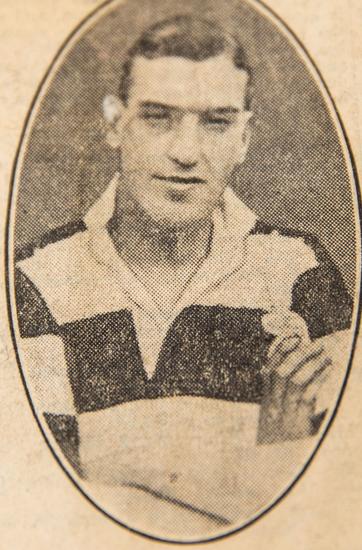 MOTTO
Quandmeme J’arrive:  'I get there when I arrive'

HMS Vanessa and laid down on l0th May 1917 and launched on 16th March 1918. Placed in reserve after WW1 she was returned to active service in 1939. HMS Vanessa was adopted by the civil community of Barry, Glamorgan.

Thanks to Charles Albutt who gives us the following information about HMS Vanessa and one of her crew Leonard Albutt.

The picture of the crew of HMS Vanessa posing around the front gun is definitely taken in 1918 or 1919. I have this picture as my grandfather is in it. He is the sailor with the cigarette in the centre of the picture. His name was Leonard Albutt. He was on the ship when she played a part in sinking a U boat in the North Sea in 1918. This was U 107 and happen in the mouth of the Tees. He received some prize money in 1921 for this (£175 was awarded to HMS Vanessa and HMS Calvia in 1921). Also, the ship was at Scapa flow during the internment of the German fleet. He left the ship and the Navy after returning from the Baltic incident in 1919. In the Baltic she went to oppose the Red Navy in operations around Kronstadt and she transferred a British agent from Helsinki to Estonia.

Time out of Action, 9 months including conversion.

VANESSA while escorting a convoy off Cromer was attacked by an enemy aircraft. A direct hit was sustained on the sheer strake at the fore end of No. 1 boiler room, and. the bomb finally burst on the ship’s bottom in N. 1 boiler room. The outer bottom plating was blown upwards over the whole length of No. 1 boiler room and 9 ft. forward of it, between 2nd longitudinal starboard and bilge keel port, and a hole 6 ft. by 9 ft.  was made in the outer bottom. Severe damage was caused to the surrounding structure. The upper deck plating was split and blown upwards from near the after end of No. 2 boiler room to the bulkhead at the fore end of No. 2 oil fuel tank and the E, R. A’s and C.P.0’s messes. Immediate flooding of No.1 and 2 boiler rooms and No.2 oil fuel tank took place.  No, 1 boiler room was wrecked, No. 1 boiler exploded and No. 2 boiler was severely damaged.  The forward funnel was blown overboard and the after funnel was wrecked.

The vessel was immobilised and out of action and was taken in tow to Yarmouth. Guns could only be fought in local control. The main W/T was destroyed and the D/G was out of action.

There was loss of life due to the enemy attack.

June 41 - early 42. HMS Vanessa underwent repairs and was converted for long range escort duty. Here forward boiler was removed allowing additional accommodation and storage space including an additional 130 tons of oil. The loss of this boiler reduced the speed to 24 knots but increased her range. After her refit the Vanessa's number was changed to  ​I29.

Nov 42. HMS Vanessa was detached from Convoy HX213 to join escort of Convoy SC107. Convoy SC107 was attacked by a wolf pack of U-boats which sank 15 ships.

Dalcroy (British) was sunk by U402. All 49 crew were rescued by Stockport the Rescue Ship.

Daleby (British) was sunk by U89. All 47 crew were rescued by Brúarfoss (Iceland).

Empire Antelope (British) was sunk by U402. All 50 crew were rescued by Stockport the Rescue Ship.

Empire Leopard (British) was sunk by U402 with the loss of 38 of her 41 crew. Survivors were rescued by Stockport the Rescue Ship.

Empire sunrise (British) was sunk by U402 and U84. All 51 crew were rescued by Stockport the Rescue Ship.

Hahira (US) was sunk by U521 with the loss of three of her 56 crew. Survivors were rescued by Stockport the Rescue Ship.

Hatimura (British) was carrying explosives. It was torpedoed by U132. The Hatimura blew up and sunk its attacker the U132.

Hobbema (Dutch) sunk by U123 with the loss of 28 of her 44 crew. Survivors were rescued by USS Pessacus and USS Uncas.

Jeypore (British) sunk by U89 with the loss of one of her 91 crew. Survivors were rescued by USS Pessacus.

3 Nov 42.  HMS Vanessa drove off U-Boat attacks on SC107 with HM Corvette CELANDINE after detection of radio transmissions from the U-Boat. 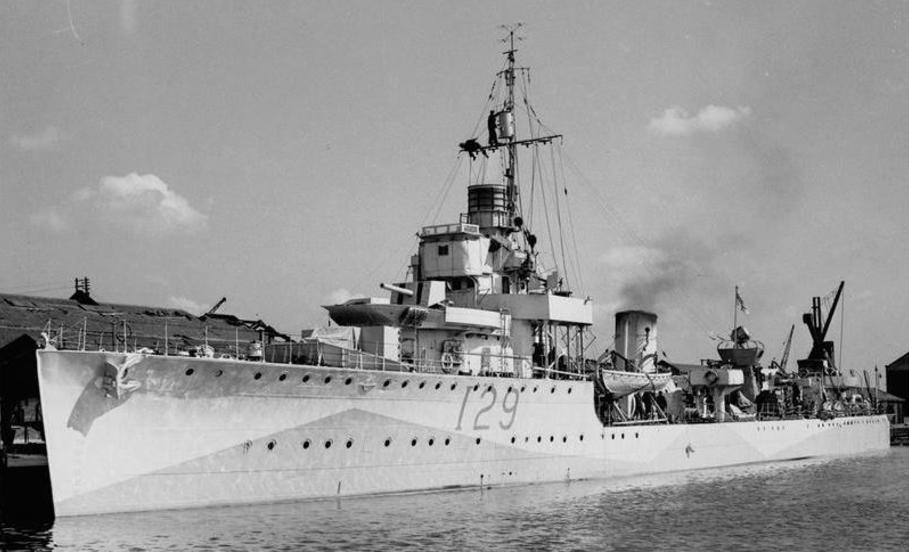 4 Feb 43. While escorting convoy SC118 again detected wireless transmissions for enemy U-boats and despatched HMS Vimy and HMS Beverley to intercept. The U-boat was depth charged and forced to the surface. The U187 was engaged by gunfire and sunk. Forty-five U-boat survivors were rescued and taken prisoner.

Once again the Wolf Pack of German U-boats attacked. Eleven ships were sunk including the rescue ship Toward.

Adamas (Greek) was in a collision. The Wreck was sunk by HMS Beverley. 13 survivors were rescued by the Lobelia, (Free French Naval Forces).

Harmala (British) sunk by U604 with the loss of 43 of her 54 crew. Survivors were rescued by Lobelia.

Polyktor (Greek) sunk by U266 Only two crew survived, they were taken aboard U-266 as prisoners of war.

Robert e, Hopkins (USA) Escort Oiler (Fuel Tanker) sunk by U402 with the loss of 15 of her 57 crew. Survivors were rescued by Mignonette.

Towards (British) rescue ship sunk by U402 with the loss of 56 of 74 crew and rescued crew from other ships.

1944. Unexpectedly the now aging destroyer was withdrawn from service and converted into a Target Ship for training of aircrew in shipping attacks.

HMS Vanessa was sold for breaking up on 4th March 1947 and arrived at the yard in February 1949. 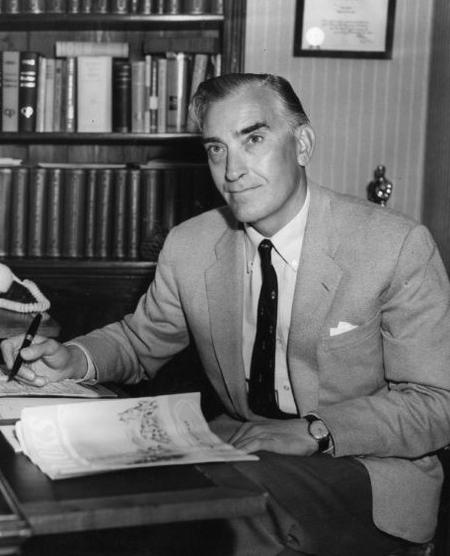 Thank you To Kevin McFarlane for the following information.

​Neil Paterson served in the Royal Navy for six years during WW2. While serving on HMS Vanessa he narrowly missed death in 1941 when the Vanessa was bombed.

Neil was Captain for Dundee United during the 1936/1937 season. He was perhaps the only football player to win an Oscar.

Neil Paterson, was a writer of short stories, novels and screenplays. He is perhaps best remembered for his screenplay of John Braine's novel “Room at the Top” which was nominated for six Academy Awards with Neil Paterson winning an Oscar for Best Adapted Screenplay.  Neil Paterson also won the Atlantic Award for Literature in 1946 for his novel the China Run.

​Neil also served as a governor for the British Film Institute, National Film School and was an executive for Grampian Television. 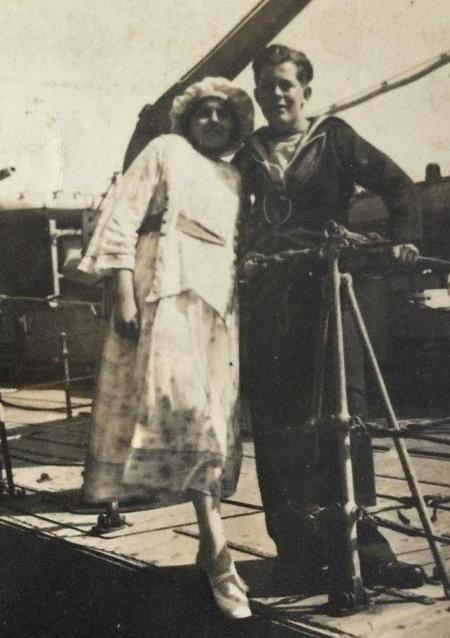 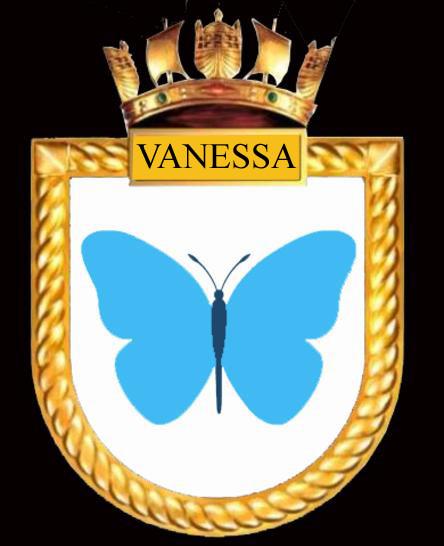 Time out of Action, 6 days.

VANESSA, while operating in the North Atlantic at 23 knots, rammed an enemy submarine. When attacked the submarine was in the act of surfacing, with conning tower in view, and moving at approximately 18 knots. VANESSA rammed the starboard side, between the conning tower and stem, with a glancing blow and sustained minor damage to the fore foot.

Wounded U-boat prisoner being transferred between Destroyers Vanessa and Hesperus. 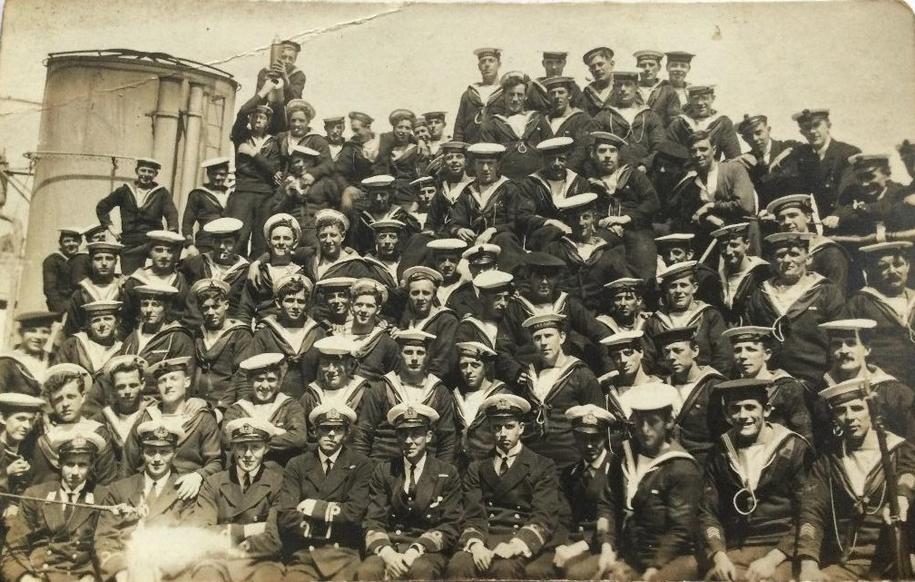 V and W class destroyers originatelly had two boiler rooms with two boilers in the rear and one in the front boiler room. This being the reason for the forward funnel being thinner. In some of these ships the forward boiler was removed allowing additional accommodation and storage space including an additional 130 tons of oil. The loss of this boiler reduced the speed to 24 knots but this was sufficient for convoy escort duty. This reduction in speed increased the range. For example, a V and W class Destroyer travelling at 15 knots could go three times as far as at top speed.

Sep 39.Deployed with 17th Destroyer Flotilla at Plymouth for convoy escort and patrol in SW Approaches. During September, October and November HMS Vanessa was escorting BC convoys (BC5, BC6/R, BC8/R, BC9/1, BC15/1, BC15/R) from the Bristol Channel to Loire in France. (Loire-Atlantique, on the Bay of Biscay) During this time she was in escort with HMS Vivacious another destroyer which would be based at Sheerness.

Dec 39 – July 40.  HMS Vanessa escorted OA Conveys which departed the Thames Estuary and formed at sea to become Convoy OG11 going on to Gibraltar, or leaving the Thames Estuary to disperse in the Atlantic.  Once dispersed HMS Vanessa would escort HX convoys, (Halifax in Canada to Liverpool) on the last leg of their journey.

27 May and 4 June 1940.HMS Vanessa did not take part in the Dunkirk Evacuations as during that time she was escorting convoys.

14 July 40.HMD Vanessa was escorting Convoy CW6 with HM Destroyer Griffin when she came under air attacks and suffered damage from a near miss by a bomb. She was towed to Dover by HMS Griffin. 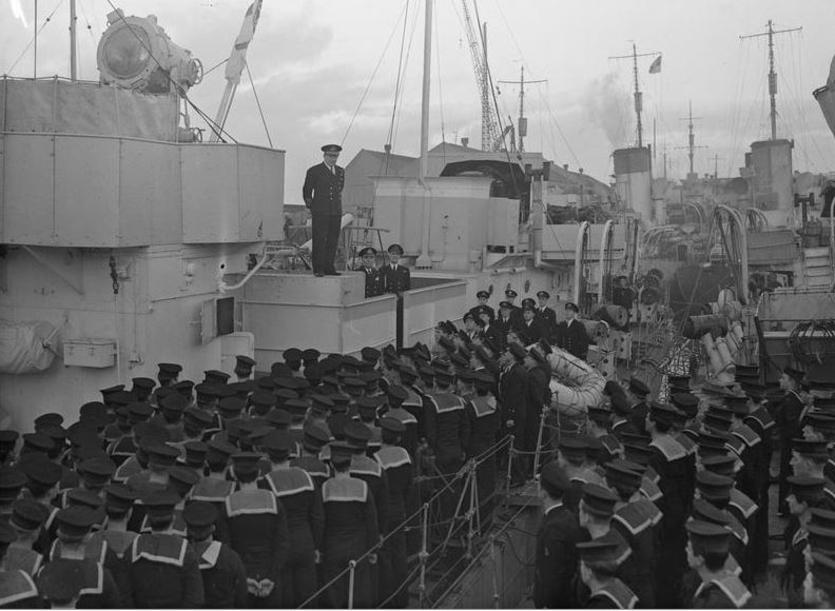 Time out of Action, 4 months.

VANESSA while escorting a convoy 3 miles off Dover was attacked by enemy aircraft. 5 or 6 near miss bombs were dropped abreast “B” gun, 30 ft. to port amidships and 20 f. off the port quarter causing minor damage to hull structure and straining the ship generally. The main and auxiliary machinery suffered damage from cracked castings and the A. S. office, No. 3 store and the forward magazine group were flooded with oil fuel and water. All electrical power was lost through damage to the dynamos and all the secondary lighting was damaged.

Ship was immobilised due to the damage to the main and auxiliary machinery, and the boiler room was inoperative through leakage of steam. The vessel was taken in tow to port.

​19 June 41. While escorting a North Sea Convoy the Vanessa sustained considerable damage from a bomb. 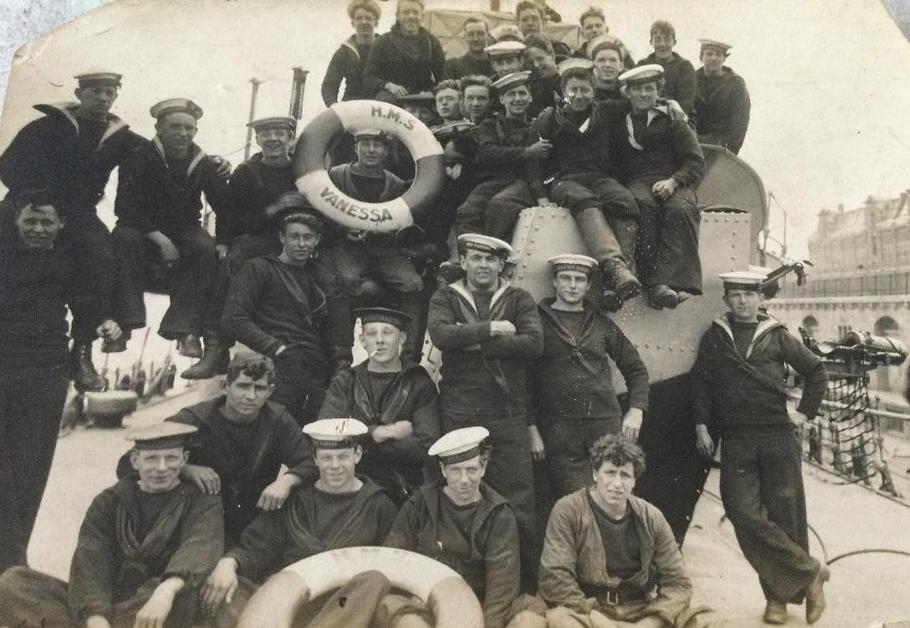 ​V and W Class Destroyer. Note the torpedo tubes and depth charges towards the stern.