​HMS Vesper had her forward boiler room removed.
Following the Evucation of Dunkirk between 27 May and 4 June 1940 HMS Vesper joined 21st Destroyer Flotilla in July. The 21st Destroyer was based at Sheerness and the Destroyers were on anti-invasion patrols and escort duties in English Channel and North Sea.

Destroyers from the Nore Command including from Sheerness Campbell, Garth, Vesper, Holderness and Venetia patrolled the French coast attacking vessels that were building up for the German Invasion fleet.

May 1940: Deployed at Harwich for evacuation support with the 19th Destroyer Flotilla.

13 May 1940: Assisted in evacuation from the Hook of Holland. (Operation ORDNANCE).

June 1940: Deployed to Dover with 19th Flotilla to provided gunfire support to the British Expeditionary Force at Le Treport in France.

1 July 1940: HMS Vesper together with HMS Windsor rescued 33 survivors of the British ship SS Beignon (5218 tons) which had been torpedoes and sunk by the German Submarine U-30 in the Atlantic Ocean. Convoy SL 36, Freetown to Liverpool. The Clearton was also sunk by U-30.

July 1940: Joined 21st Destroyer Flotilla based at Sheerness for anti-invasion patrols and escort duties in Channel and North Sea.

8 Oct 1940: HMS Vesper towed HMS Hambledon into Sheerness. HMS Hambledon had activated a mine off the North Foreland and sustained serious damaged. One man was killed and two injured.

12 Nov 1941. While escorting Convoy FS50 (FS650) consisting of upwards of fifty ships came under attack by e-boats. The SS Aruba and SS Waldinge were sunk by Schnellboote S41 and S105. The tanker War Mehtar at 5,502 tons was torpedoed and sunk by the S104 (Captain Rebensburg.) The Convoy was escorted by the Vesper, Verdun, Wolsey, Campbell, Garth, Hambledon, Quorm, Kittiwake and Widgeon. Vesper and Garth were close to the War Mehtar when she was attacked near buoy 56 and went in pursuit of three e-boats. Garth was damaged by gun fire.

Time out of action, six months including conversion.

A direct hit occurred at the after end of the W/T office.  Aerial leads to type 252 and leads to the motor alternator of type 286 were cut by splinters.

Direct hit occurred on the Perspex window on the aft side of type 271 radar. The aerial reflector and type 271 damaged.

Direct hit occurred on the toughened glass windscreen on the port side of the bridge.

Direct hit with an 88 mm shell occurred on the starboard side of the W/T office. The main transmitter was damaged by splinters.

31 August 1943.Vesper was in collision with HM Destroyer VIVACIOUS which sustained major damage.

​6 June 1944.Vespa was deployed in defence of the D-day convoys and for close support at Omaha Beach.

It did not go well for the American forces at Omaha Beach and heavy casualties were inflicted on them by the defending enemy.

The assault force had suffered from rough seas as they traversed eleven miles of open sea in their Landing Craft. Of the 32 amphibious tanks which were the vanguard of the assault, only five remained afloat. Of the 50 howitzers to support the infantry only 18 survived, the rest sinking to the Ducks transporting to shore. Landing craft especially equipped with men and gear to clear the beach obstacles, the mines attached to them and the booby traps also sank with disastrous results.

Only a few gaps could be opened through the lethal obstacle barrier resulting in bottle necks were landing craft built up into an unorganised jam.

The preliminary bombardment was in effected with gun emplacements and machined gun pillboxes being operational. There were no bomb or shell craters on the wide exposed beach in which to seek shelter. The soldiers of the American 1st and 29th Divisions were trapped at the water’s edge being raked by machine gun, mortars and small arms fire.

This deplorable situation was in part alleviated twelve Destroyers, amongst these HMS Mendip and HMS Vesper (Sheerness Destroyers) which sailed right up to the beaches to give the beleaguered army close support, knocking artillery emplacements, machine gun pillboxes and Germen infantry emplacements.

HMS Vesper survived the war and was sold for disposal in 1947.

MOTTO: 'You know not what the evening brings forth'
BADGE:  A Field Blue with a star silver.

World War One Destroyer was laid down on the 7th December 1916 and launched on the 15th December 1917. HMS Vesper was put into reserve after WW1 and returned to service in 1939. She was adopted by the town of Skipton in Yorkshire.. 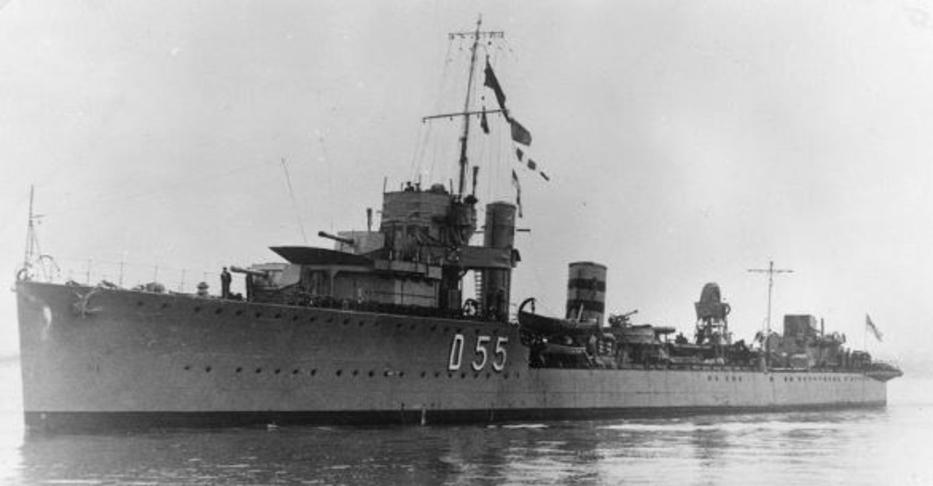 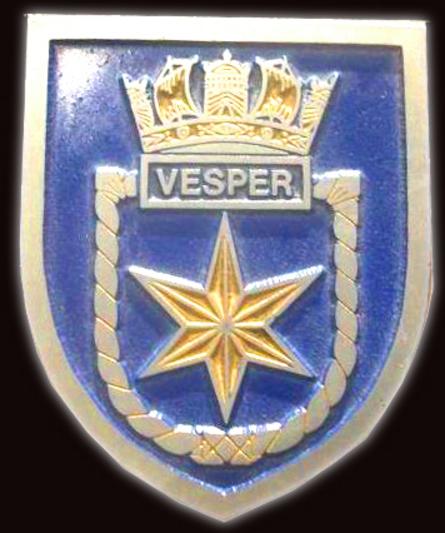 DISTINGUISHED SERVICE CROSS. Felix Edward Neville-Towle was awarded a DSC. It is possible  he received  his DSC for the action of 11 December 1942,  when HMS Vesper was in action with an enemy convoy off Dieppe and was hit by enemy shell fire.

Watch this short video about the Wildfire Destroyers.
Sheerness Destroyers at D-day: https://youtu.be/iftqjOj89Xg