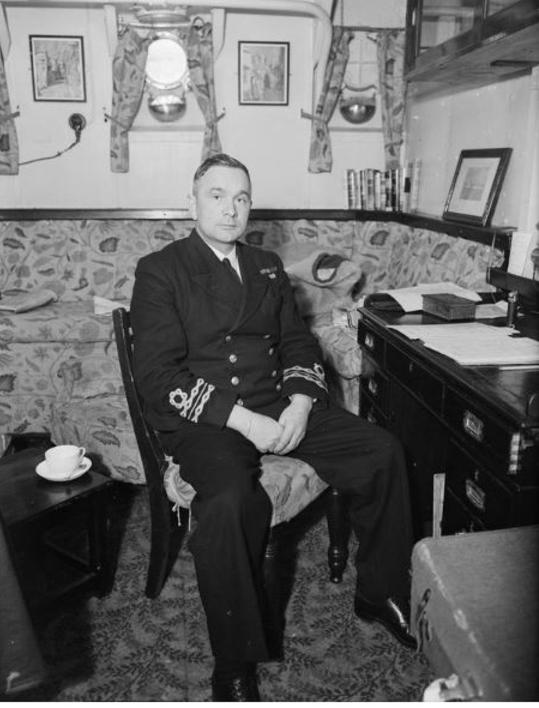 On a field Red a Mills Bomb proper with a wreath Gold. 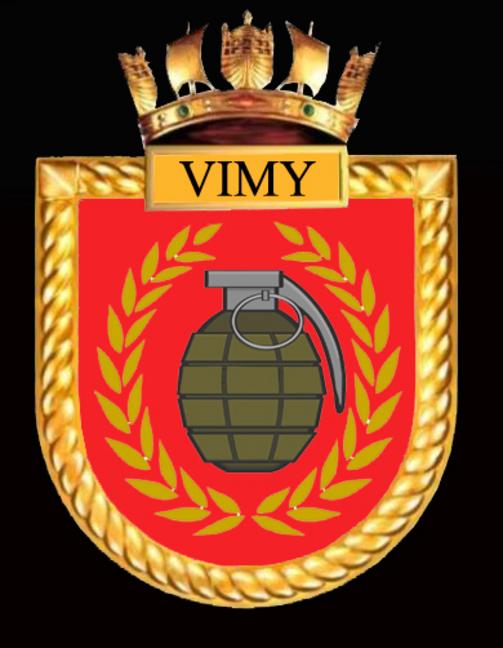 Two German prisoners captured after the sinking of their U-boat talking to a British Petty Officer on board HMS VIMY.

Sep 39.  HMS Vimy was deployed with the 11th Destroyer Flotilla in the English Channel for convoy defence and anti-submarine patrol. During this time, she escorted OB and OG Convoys from Liverpool into the Atlantic to be dispersed about 750 nautical miles west of Landsend.

12 May 40. Destroyers Vimy and Windsor departed Dover at 0500 to meet destroyers Vivacious and Venetia from Harwich off Maas Light Vessel to operate off the Dutch coast.

22 May 40.HMS Vimy (Lt Cdr C. G.W. Donald), with HMS Keith (Captain D. J. R. Simson,) and HMS Wild Swan (Lt Cdr J. L. Younghusband) bombarded German targets in Calais all day long. The Vimy took part in the evacuation of troops from Calais and rescued the Welsh Guards who were surrounded by the enemy and took them to Dover.

23 May 40. HMS Vimy took a 200 strong Royal Marines demolition party XD G. (Lt Cdr A. E. P. Welman DSO DSC) to Boulogne. (Operation XD). Their objective was to destroy oil installations and anything which could of use to the enemy.

As the Germans attacked Boulogne, the Vimy, White Swan and Keith supported the British forces by firing at targets such as German tanks, guns and motorized formations, all the time under air attack.

The Vimy opened fire on the German occupied Fort de la Creche and were rewarded when an ammunition magazine exploded. At the same time as rescuing a French sailor she came under fire from German field guns which she engaged successfully.

As the Vimy and Keith tied up at the dockside and began to take on troops they were again attacked by German aircraft. The first wave was beaten of by British Spitfires, but the second wave of some 60 Stuka Dive Bombers press home their attack on the docks and ships. At the same time the Germans troops attacked with mortar and machine gun fire.

The Keith took aboard one hundred and eighty troops but lost her Captain, Captain Simson with seven of her crews being killed and twenty-eight men wounded, including Lt Cdr R. S. Miller.

The Vimy also came under concentrated fire from the enemy as she took off troops. She backed out of the harbour stern first and on fire a mortar shell exploded on her forecastle. Lieutenant Commander Colin. G W. Donald was mortally wounded, Sub Lieutenant Douglas R, Webster was killed and several more of her crew were wounded. Nevertheless, HMS Vimy took off one hundred and fifty troops.

THE very last destroyer to enter to Boulogne was the Vimiera which took on board 1,400 troops and civilians and left the harbour seriously overloaded. 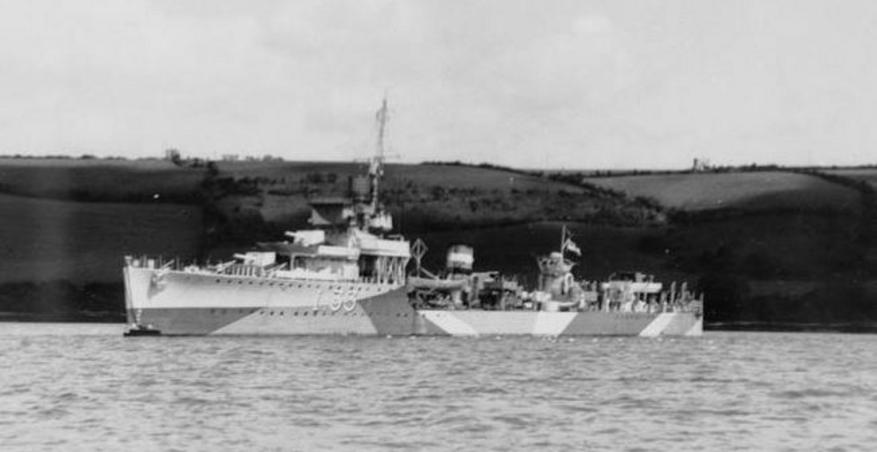 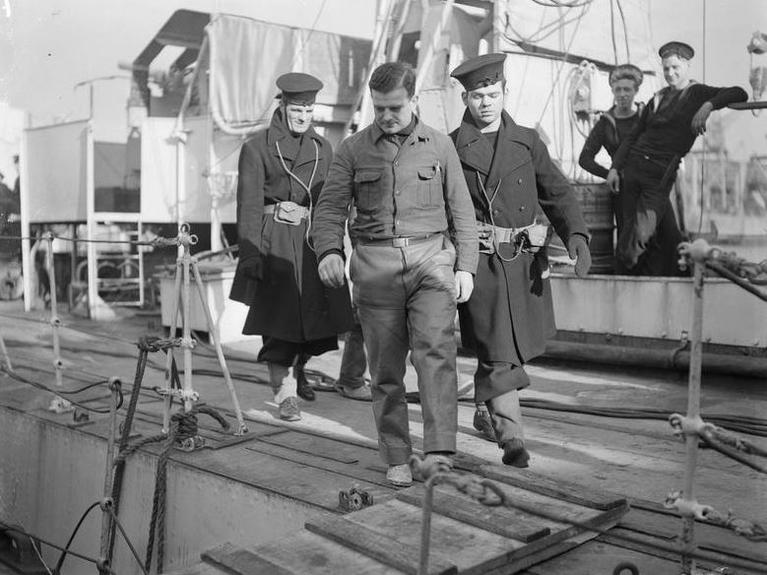 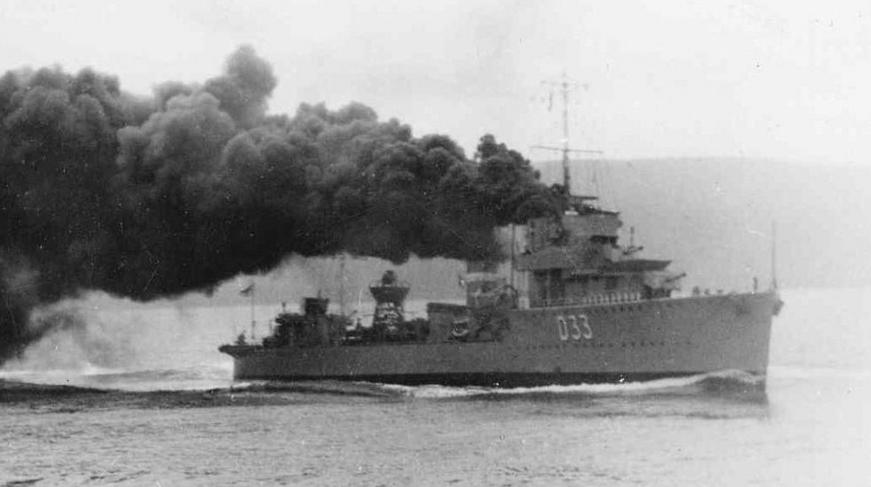 German prisoners, the crew of a U-boat, being escorted ashore from HMS VIMY. 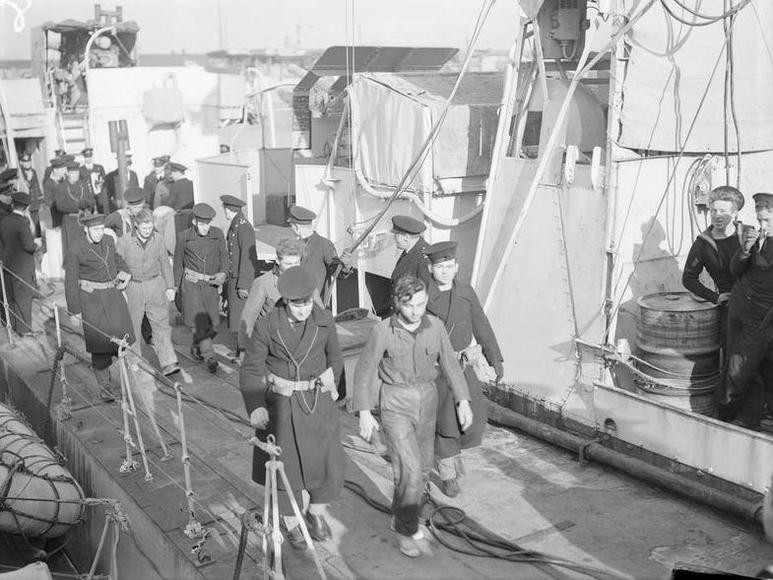 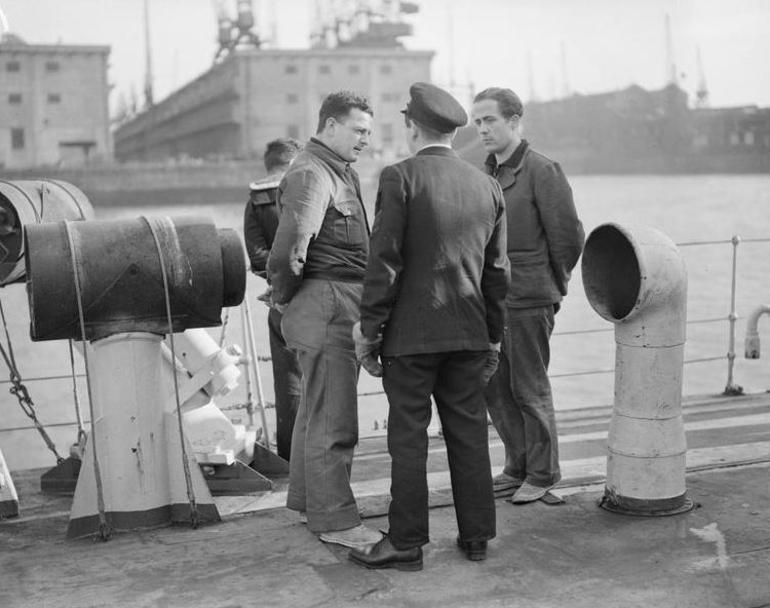 HMS Vimy started her life during WW1 as HMS Vancouver named after the explorer, Captain George Vancouver of the Royal Navy who explored and charted North America's northwestern coast and after who Vancouver Island and the city of Vancouver in Canada are named. Between wars, while in reserve, HMS Vancouver was renamed HMS Vimy, to commemorated the capture of Vimy Ridge by the Canadian Army in 1917. Laid down on 30th June 1916 she was launched on 28th December 1917. In 1942 she was adopted by the civil community of Hucknall in Nottinghamshire.

Lieutenant Commander R. B. Stannard, VC, Royal Navy Reserve, in his cabin on board HMS VIMY, after her successful battle. Lieutenant Stannard, was awarded the Victoria Cross when in command of HM Trawler ARAB during the Norwegian campaign in 1940.

When enemy bombing attacks had set on fire many tons of hand grenades on Namsos wharf, with no shore water supply available, Lieutenant Stannard ran Arab’s bows against the wharf and held her there. Sending all but two of his crew aft, he then endeavored for two hours to extinguish the fire with hoses from the forecastle. He persisted in this work till the attempt had to be given up as hopeless.

When he was ashore and a trawler next to his ship was hit by a bomb and set on fire, he, with two others, boarded Arab and moved her 100 yards before the other vessel blew up.

When leaving the fjord, he was attacked by a German bomber, a Heinkel 115, he held his fire till the enemy was within 800 yards, and then brought the aircraft down.

Throughout a period of five days Arab was subjected to 31 bombings.

11 April 43. Joined convoy ON 176, heavily escorted only one cargo ship was lost to U-boats. Unfortunately, HMS Beverley was torpedoed and sank by U188 during  a night attack with the loss of 148 of her crew. Only four survived.

June to Dec 43. HMS Vimy was deployed to protect the route from the UK to Gibraltar. During this time many military convoys including troop ships were using this route for the invasion of North Africa and Italy.

May 44.Transferred to Plymouth Command in preparation for D-day. While based at Milford Haven took part in preliminary D-day exercises.

During her time with Operation Neptune (The Navy side of D-day) HMS Viny would have escorted follow up convoys to the D-day beaches, protected the shipping at the beaches from attack by E-boats, exploding motor boats and one man submarines.

Aug 44 to Aug 45. HMS Vimy goes back to Sheerness for Convoy defence and patrol duty in the North Sea and English Channel. During this time, she escorted several ON convoys which departed from the Thames Estuary to New York. She also escorted TAM convoys form Southend to Antwerp.

Time out of action: Nil.

VIMY while evacuating troops from Boulogne Harbour was attacked by enemy aircraft and simultaneously by German troops with mortars, machine gun and rifle fire. One bomb exploded on the jetty within 3 yards of the ship and a fire was started on board.

Fighting Efficiency - Slightly impaired. The ship left harbour to return to Dover because of the fire and the many stretcher cases on board.

24 may 1940. HMS Vimy leading up to Dunkirk, was based with the 21st Destroyer Flotilla at HMS Wildfire at Sheerness. Historian and Author J. P. Foynes in his book “Battle of the East Coast” refers to HMS Vimy as being a Sheerness Destroyer.  “Sheerness sent Venetia, Vimy, Windsor and Wolfhound. The first suffered a direct hit from a German shore battery and two of her officers wounded and the captain of Vimy was killed by a bomb.” And later in the book he records, “From Sheerness the destroyers Vega, Vimy, Windsor and Wolfhound left for the Operation”.

30 May 49.  HMS Vimy would make four trips to the Dunkirk beaches under heavy air attack. On one of these trips the Viny took captain Tenant, senior Navel Officer and his staff to Dunkirk.

31 May 40.HMS Vimy was damaged in collision with armed yacht Amuree and by air attack. The Amuree sank in the Dover Strait and the Vimy was out of action.

August 40. The repairs to Vimy are completed and she is transferred to the Home Fleet.

January to May 1941. HMS Vimy was converted into a long range escort. She was the first V&W class destroyer to be converted.

5 July 41. Deployed at Gibraltar arriving there on the 5th July 1941. HG Convoys on the Gibraltar to Liverpool route were in easy reach of the German U-boats based in the captured French Ports.

20 Sep 41. While escorting this convoy HMS Vimy and HMS Wild Swan depth charged an Italian submarine, the Luigi Torelli, and damaged her.

21 Sep 41. Sank Italian submarine Alessandro Malaspina with the loss of all crew.

HMS SPRINGBANK a fighter catapult ship was torpedoed and damaged with the loss of 32 of her 233 crew. HMS Springbank  was scuttled by HMS Jasmine.

Aug 42.Escorted the Battleship Queen Elizabeth, which had been damaged by Italian Frogmen across the Atlantic to Norfolk, Virginia for repair.

3 September 1942. After a torpedo attack HMS Vimy detected a submarine on its ASDIC’s (Sonar) detection sets and with HMS Pathfinder and HMS Quentin proceeded to drop depth charges. With no definite “kill” being made the destroyer continued to search for the submarine over a large area. Five hours later, barely visible in the night a submarine surfaced close to HMS Vimy. Vimy opened fire on the submarine which fired a red “recognition” flare. As there were American submarines in the area and being close to the US Naval base at Trinidad the order was given to cease fire. Luckily none of the shells had hit the Submarine. As the Vimy closed on the Submarine it altered course and rammed the Destroyer. As the submarine scraped down the port side of the Vimy a flare was fired which identified it not as an American submarine, but as the U-162 a German U-boat.

Badly damaged by the previous depth charge, the collision and being raked by the destroyer’s propeller, the U-boat sunk. All the crew but one was saved and taken prisoner by the Vimy.

14 Sep 42. HMS Vimy on sighting what they believed to be a submarine on the surface opened fire with their guns. Again the order was given to cease fire. The “submarine turned out to be a ships raft with survivors from the merchant ship, Sir Huon (Panama) which had been torpedoed. A canvas had been rigged over it to protect the women and three children from the sun which masked its outline. Over two weeks at sea in an open boat had left the survivors in a desperate condition. After treatment by the Destroyer’s doctor and given water and food they were transferred to another merchant ship to take them to Tobago.

Feb 43. Vimy, her convoy and other escorts were under sustained attacks by enemy U-boats. On one occasion when the Vimy was low on fuel and supplies and riding high in the water a torpedo passed directly under her. When the helm was put hard over to try and avoid the torpedo and to attack the U-boat the Vimy’s steering engine shaft sheared and the rudder jammed. It took six hours to rectify the damage.

4 February 1943. Convoy SC 118 left New York on the 24 Jan 43 and arrived at Liverpool on the 12 Feb 43. Also escorting the convoy with Vimy was HMS Vanessa another Sheerness distroyer. HMS Vimy and HMS Beverley forced the German U-boat U-187 to the surface with depth charges and then sunk her with gun fire. Nine of the U-boats crew were loss and 45 survivors taken prisoner. The U-187 had been located after radio transmissions from her were intercepted. The Vimy also carried out depth charge attacks on U262.

The battle with the U-boats lasted three days and nights.

Eleven ships were sunk including the rescue ship Toward.