It seems strange today, now we know about the health risks of cigarettes, but in 1939/1945 the Overseas League Tobacco Fund was collecting money from the public to give free cigarettes to our sailors and soldiers.

​One pound for one thousand cigarettes!!!

April 1914, Requisitioned by the Admiralty as a minesweeper.

3 February 1940, Minesweeping trawler FIREFLY was severely damaged when a mine which was being defused, exploded killing 12 of her crew including her skipper, Lieut. David B. Johnstone and wounding 13 more. The Firefly was towed to Leith by the Wardour.

20 June 40. Sheerness Minesweeper Trawler Wardour rescued three men in a small boat who were from Ijmuiden Holland near b7 buoy off Frinton.

31 Oct 40. HMT Wardour  detonated a mine and sank in the North Sea. Twelve of her crew were rescued by HMS Douglas, Destroyer Flotilla Leader.

3rd November 1940,  HMS Douglas  having departed Scapa Flow to search for a boat reported as containing four men and returned with 12 survivors from the Wardour, mined on 31 October.

31 January 1953: In extreme weather conditions the Wardour took part in the search for the trawler MICHAEL GRIFFITH which was sinking. The Wardour battled through 85 miles of appalling conditions but found no trace of the Griffith.

​​DISTINGUISHED SERVICE MEDEL. A DSM  was awarded to Officer  Herbert Arthur Smith from Grimsby. It was awarded at Bucking Palace by the  King on 4th March 1941. The citation reads ,  "For courage and resource in repelling enemy air attacks".

FREE CIGARETTES! Captain H G Hopper handing over a supply of Overseas League Tobacco Fund gift cigarettes to the Commanding Officer of he Minesweeper Wardour. Standing next to Captain Hopper is Officer  Herbert Arthur Smith from Grimsby who was awarded a DSM,  which he received  from the King on 4th March 1941. The citation reads ,  "For courage and resource in repelling enemy air attacks".

Captain H. G. Hopper would  go on to gain great acclaim as commander of the minesweeping flotillas which cleared the mines from the Scheldt and opened up the port of Antwerp. 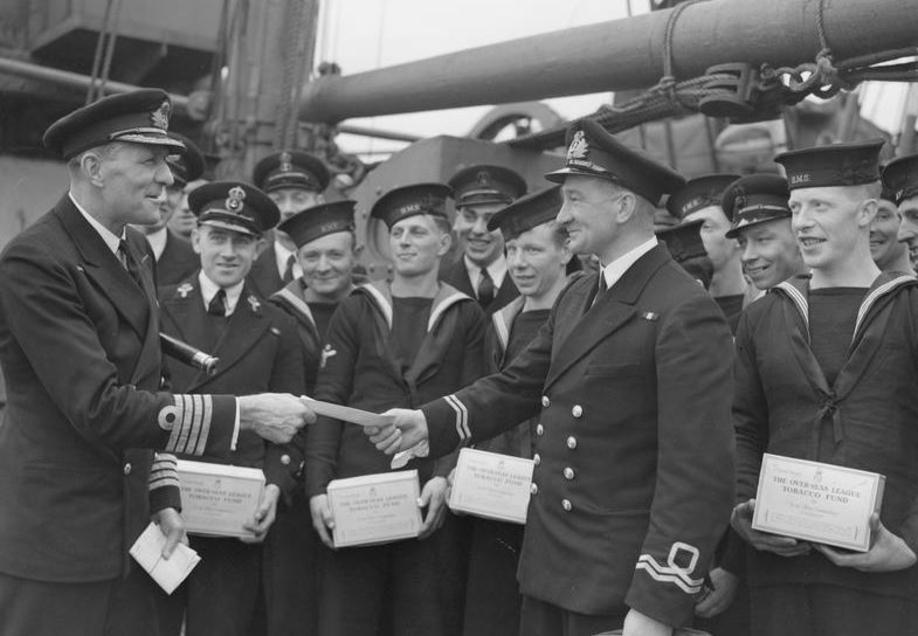 HMT Wardour leaves Queenborough in search of mines. Dead mans island and the coal power station on Grain can be seen in the background. 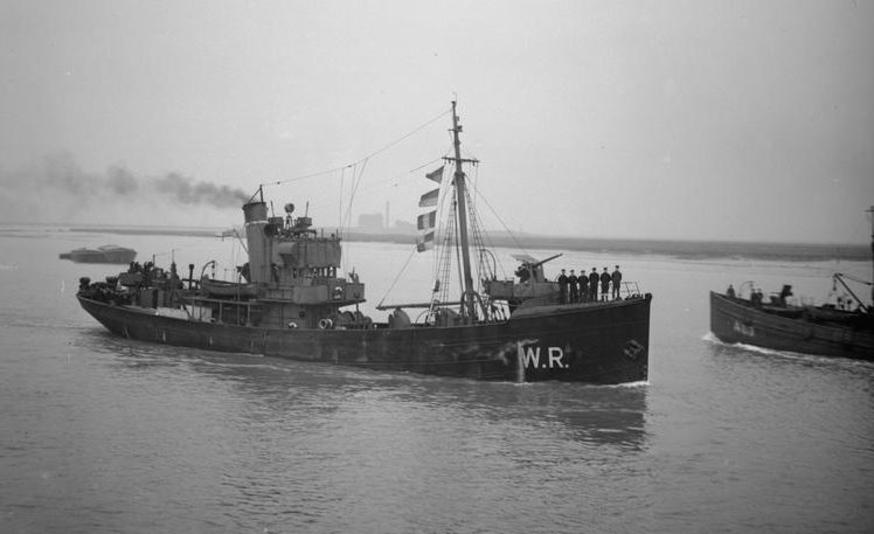 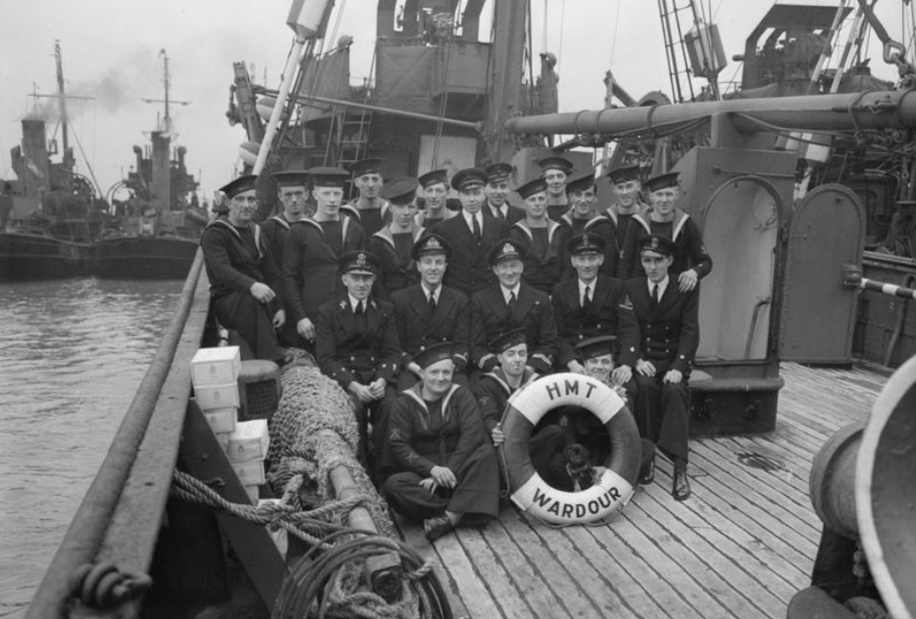 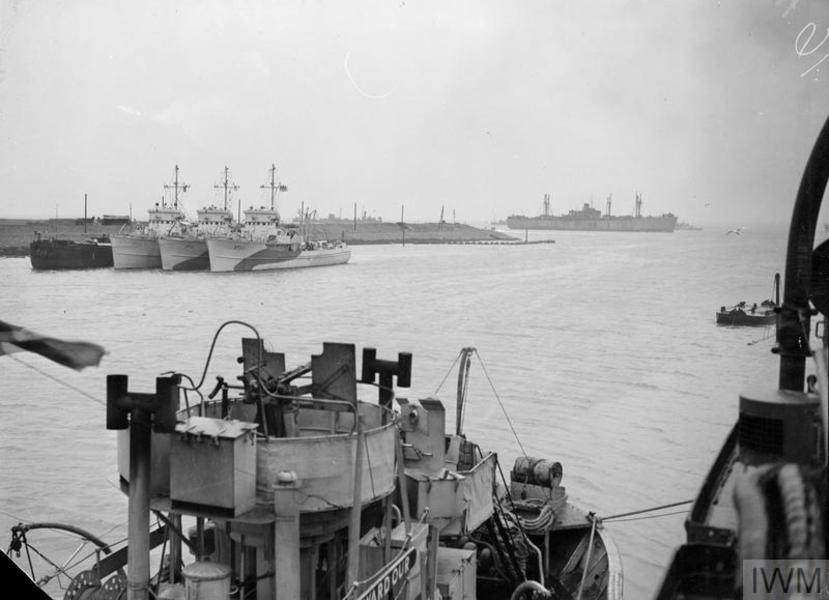 Captain H G Hopper inspecting the crew of the Minesweeper HMT WARDOUR. Minesweepers tied up with Queenborough Pier in the background.

Both trawlers were too far away to help but relayed the distress message. The trawlers WARDOUR (GY523) and BRACONBANK (A237) were at least 85 miles away but proceeded at top speed in the most appalling conditions to the given position. HMS Tenacious sail from Londonderry and an air search was carried out by the RAF. Castlebay and later, Islay lifeboats were launched and searched for seven hours but found nothing; two crew members of Islay lifeboat died from fumes and exhaustion.

“Having regard to the weather conditions prevailing, and the position in which the trawlers were when they received the information, the Court is of opinion that all those three trawlers (the "Braconbank", the "Wardour", and the "Sata",) and their crews were exposed to grave risk while undertaking this search, and the action of their skippers and crews in responding so promptly to the call for assistance is highly commendable, and well in keeping with the traditions of the British Merchant Navy and Fishing Fleets.”

To find out more of the Wardour’s movements go to DRIFTERS AND TRAWLERS.

Commissioned as an armed trawler in World War One the Wardour was again to serve in World War Two as a minesweeper. On the 31 Oct 1940 the Wardour detonated a mine.  Her crew took to the lifeboat and were rescued by HMS Douglas.

Some accounts say she sunk but this is incorrect as she is recorded as being under repair in Sheerness and served as a minesweeper based at Wildfire III Queenborough in 1942/43/44/45. 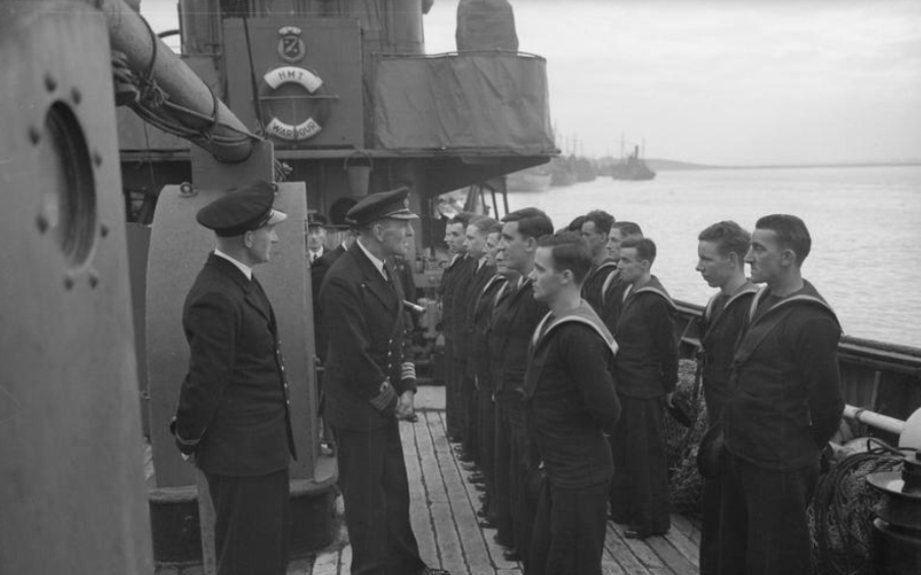 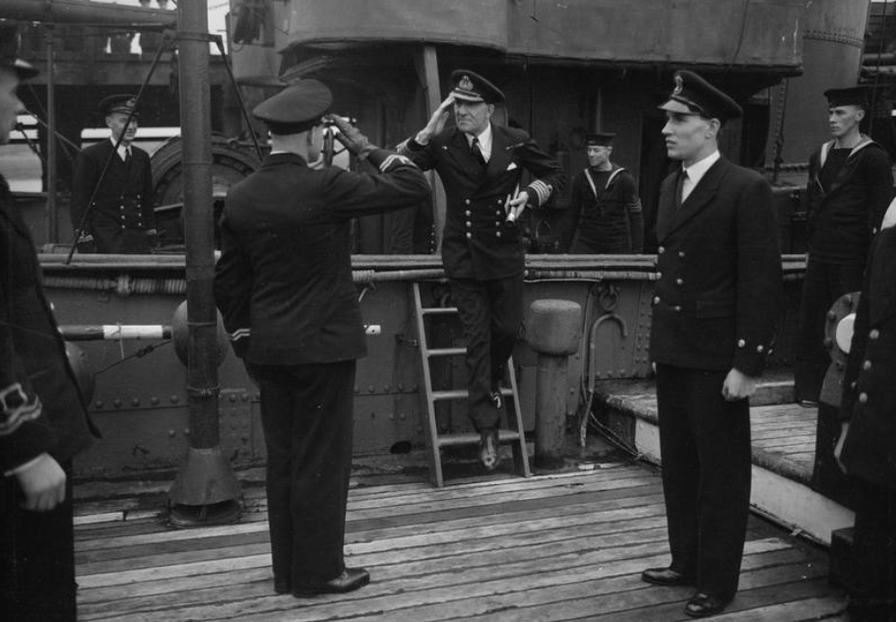 The Wardour at the Scheldt.