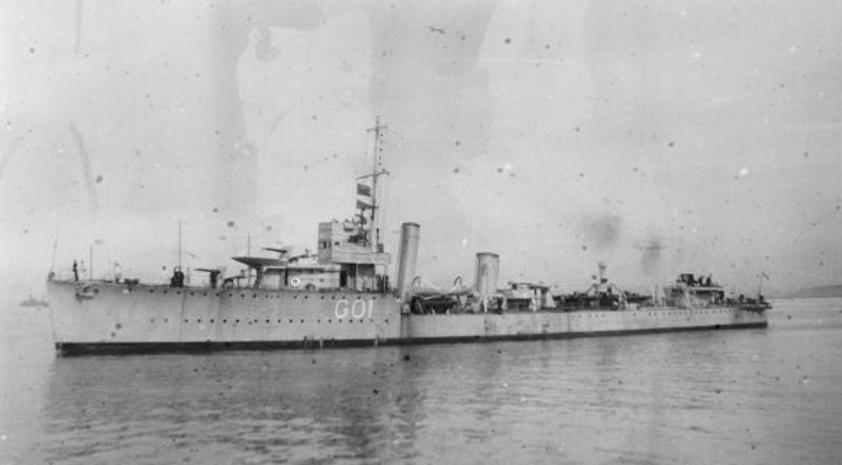 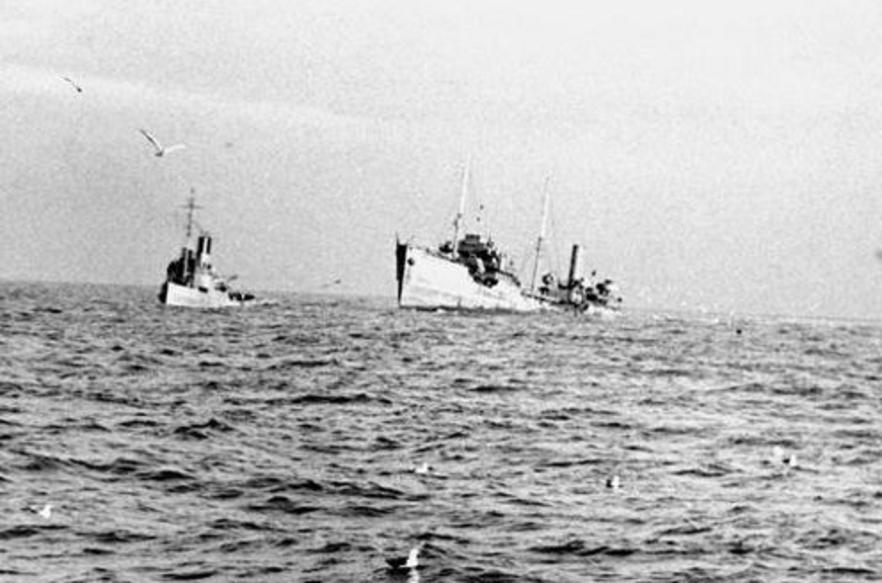 DSM Distinguished Service medal. Stanley Gordon SUMMERS, received two more awards, DSM while on the HMS Brixham on the 7 Dec 43, DSM (Distinguished Service medal) DSM awarded for gallantry, outstanding skill and devotion to duty in minesweeping operations over dense and shallow minefields in the opening up of Greek ports in the Gulf of Corinth. and on the 12 Jun 45 (HMS Brixham) a second MID awarded for steadfast courage and skill in a dangerous and important minesweeping operation.

(Strangely there are only two names for June 41 this is probably because the Vivacious was thought to be undergoing repairs at that time.)

HMS Vivacious was laid down in July 1916 and launched on 3rd November 1916. In 1935 the Vivacious was placed in reserve to be returned to service in 1939. The Vivacious was adopted by the civil community of Solihull, then in Warwickshire.

On a Field Green a squirrel Gold.

HMS Vivacious was not converted into a long range escort.

Sep 39. HMS Vivacious with sister ship HMS Vanessa also based at Sheerness during parts of WW2 were deployed with the 17 Destroyer flotilla to escort BC Convoys from the Bristol Channel to Loire in France. (Loire-Atlantique, on the Bay of Biscay)

Oct 39 to April 40.Escort with HG Convoys from Gibraltar to Liverpool. These were large convoys of 60 to 70 ships with a large escort of warships. The cargoes on these ships returning to England included food stuffs like fruit, dates, oranges, barley, beans, eggs, sugar, tea, wine and raw materials like cotton, iron ore, and even air raid shelters and sand bags.

27 April 40.HMS Vivacious was patrolling off Dunkirk beaches to intercept any attack by E-Boats and provided anti-aircraft cover.

28 May 40.HMS Vivacious made two trips to Dunkirk and embarked 326 and 359 men respectively for passage to Dover.

HMS Vivacious with her World War One number G01 in Copenhagen 1919, next to HMS Whirlwind. (Cruisers in front of them.)From the Royal Library in Denmark. Thank you to SCPO Erling Baldorf, Royal Danish Navy, retired, for the photograph.

After the war, HMS Vivacious was deployed to the Baltic and in 1919 participate in the British Campaign against Bolshevik forces during the Russian Civil War, seeing action against Russian warships.

Time out of Action, Nil.

VIVACIOUS while evacuating troops from Dunkirk was hit by a shell fired from German army units advancing towards the coast. Details of damage are not available.

1 June 39.Under air attack, once again into the hell of Dunkirk went the Vivacious, this time she came back with 427 men and landed them at Dover. 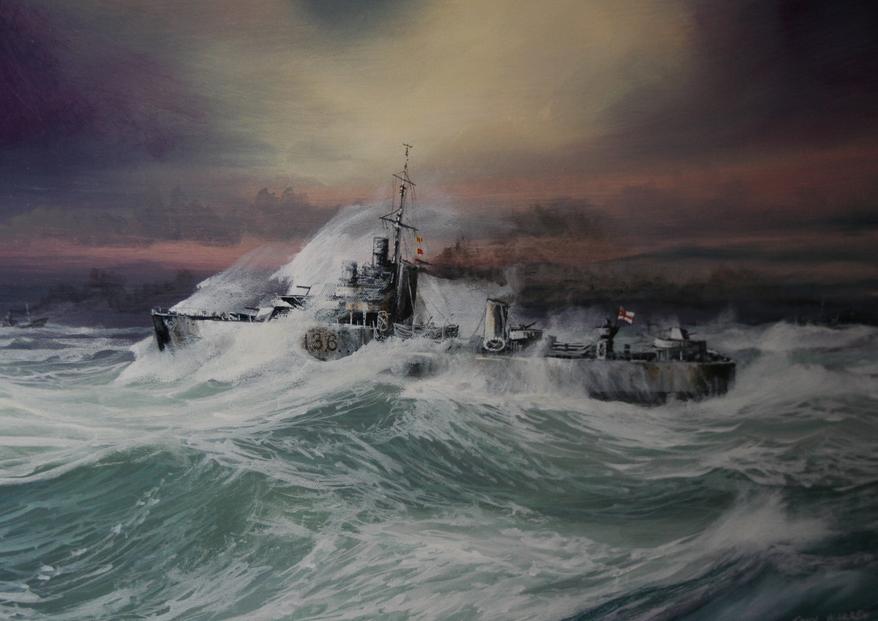 SEAMAN TO THE RESCUE. NOVEMBER 1943, AT SEA ON BOARD HMS VIVACIOUS.
HM Rescue Tug SEAMAN takes in tow a casualty which had managed to patch up and keep afloat after being torpedoed.

Time out of Action – Nil.

VIVACIOUS, while in the North Sea moving at 20 knots, was attacked by enemy aircraft and sustained a near miss 100 ft. astern. The rudder jammed at 4° to starboard, but repairs were effected in 4 and a half hours.

12 Feb 42.   While taking part in Flotilla exercises with HMS Campbell of 21st Destroyer Flotilla (Sheerness) and Mackay, Worcester Whitshed and Walpole of 16th Destroyer Flotilla (Harwich), and seven Hunt class destroyers which were on standby, they were ordered to intercept the German Battle Fleet consisting of the SCHARNHORST, GNEISENAU and PRINZ EUGEN with supporting, Destroyers, e-boats and aircraft.

Taken by surprise by the Battle fleet and not given enough notice many of the Royal Navy vessels and Royal Air Force planes were out of position and unable to take part in the planned attack.

Unsupported, the Sheerness and Harwich Destroyers went out through specially made gaps in the mine barrier to intercept the German ships.

With the German Battle Fleet in sight a formation of Stukas and another of Ju 88’s attacked from the air. In true Royal Navy tradition, without hesitation, the British Destroyers launched an attack on the German Battle ships.

The German Battle ships opened fire on the British ships long before the Destroyers could return fire with their much smaller guns. In any event, the Destroyers guns would have little effect on the armour plate of the Battle Ships.

Under a thundering barrage from the German ships and attack from  planes above the Destroyer flotilla (from Sheerness and Harwich) sped towards the German Battle fleet. At 2500 yards they fired their torpedoes. In the rough seas the gallant torpedo attack was unsuccessful. The Worchester was hit seven times by enemy shells and stopped dead in the water with 26 of her crew killed and 45 injured.

HMS Vivacious drew alongside Worchester to take off her wounded and as they did so they were mistaken for German Destroyers by 42 Squadron of Bomber Command and narrowly missed being torpedoed. HMS Vivacious and Worchester also pick up survivors from the sea who had wrongly misinterpreted the order “Stand by to abandon ship” as “Abandon Ship”.

3 March 43. HMS VIVACIOUS left Scapa for Hvalfiord Iceland where she arrived at noon on 3rd March.1943

Convoy RA 53 lost three ships to U-boats and one foundered in a storm. The convoy consisted of 30 Merchant ships and 36 war ships. Taking war supplies to Russia many of the ships returned with cargos of timber and ore. The convoy was attacked by German U-boats with four American ships being sunk.

The cargo ship Executive was torpedoed and sunk by U 255 with the loss of nine of her 62 crew.

The Puerto Rican was sunk when she straggled behind the convoy and was torpedoed and sunk with the loss of 64 of her 65 crew. The lone survivor was rescued by HMT St. Elstan.

The Richard Bland was torpedoed on 10 March by U-255 and split in two. The stern section sank with the loss of 34 of her 69 crew, the bow section was towed to Akureyri in Iceland.

The American Liberty ship J L M CURRY foundered in a storm. This was perhaps a forewarning of the Liberty ship weaknesses. They were constructed from poor quality steel and cold weather, such as that found in the North Atlantic Ocean or the Arctic, made it brittle. Liberty ships were welded and not riveted and once a crack started there was nothing to stop it.

May 43 to May 44.Continuous escort duty in North Sea based at Wildfire, Sheerness.

These “Follow Up” convoys were of huge importance. By D-day plus one the assault troops were exhausted and a build-up of men and equipment, of ammunition, fuel, water and supplied was of critical importance.

The “Follow up” convoys with their escorting war ships were vital to the success of the Normandy Invasion. On D-day plus one 98 vessels arrived at the beaches. On D-day plus two 216 arrived.

The men of the Merchant Navy on the Coastal and Atlantic Convoys and now on the Convoys to the Normandy Invasion beaches, in conditions of considerable danger, displayed great qualities of seamanship and courage.

When not employed on convoy duty HMS Vivacious would have provided support for shore based troops by shelling enemy positions and defending the beach head from attack by enemy aircraft, E-boats, one man submarines and explosive torpedo boats.

July 1944. HMS Vivacious was released from Operation Neptune and resumed her (Sheerness based) duties escorting convoys along the East Coast of England and through the English Channel.

After an illustrious career HMS Vivacious was scrapped in February 1947.

Evacuation from Dunkirk in 1940, via boats, including soldiers of the British Expeditionary Force boarding HMS VIVACIOUS.

HMS Vivacious with her World War One Pennant Number G01. This was changed to D36 in World War Two. 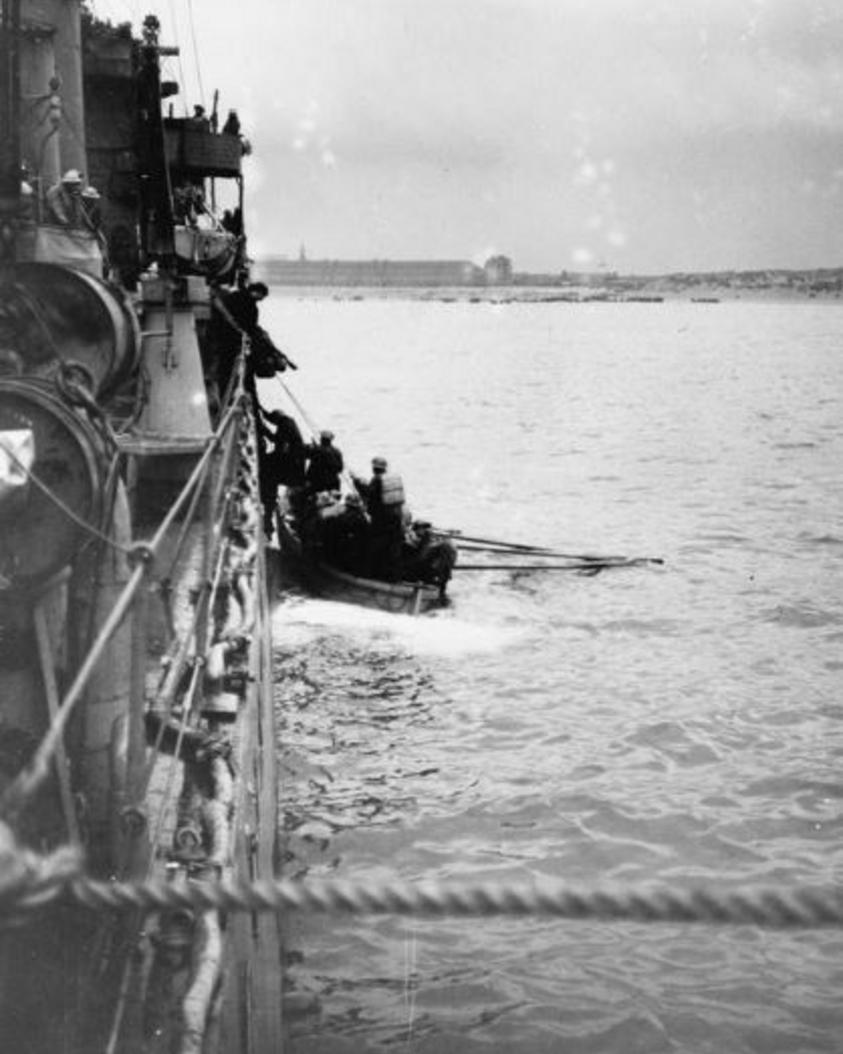 Time out of Action, 1 week.

VIVACIOUS while engaged in the evacuation from Dunkirk was attacked by enemy aircraft and sustained minor damage.

7 June 40. After repair at Portsmouth, HMS Vivacious was transferred to Sheerness to join 21st Destroyer Flotilla for convoy defence and patrol duty. 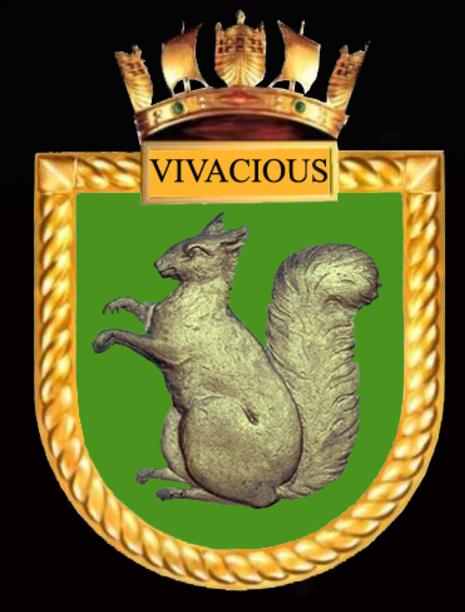 Time out of Action - Nil (damaged whilst undergoing repairs)

VIVACIOUS during an air raid in the Hull area suffered superficial damage caused by bomb splinters.

During the air raid large numbers of bombs including high explosive and incendiary were dropped on Hull city centre and the docks with 400 people being killed and 758 injured.

3 Oct 41.While escorting a convoy in the North Sea HMS Vivacious was attacked and bombed by enemy aircraft.

Thank you to David Batstone who sent us this painting of HMS Vivacious. The painting was commissioned by his mother as a gift for her husband, Frank Burnett, who served on the Vivacious.

​30 May 39. Under constant air attack HMS Vivacious went again into Dunkirk and retrieved 537 men and took them to Dover.

31 May 39.Under attack from the air and by howitzers from land the HMS Vivacious was damaged and sustained 15 casualties, 3 killed and twelve wounded  including Lt. F. P. Baker. 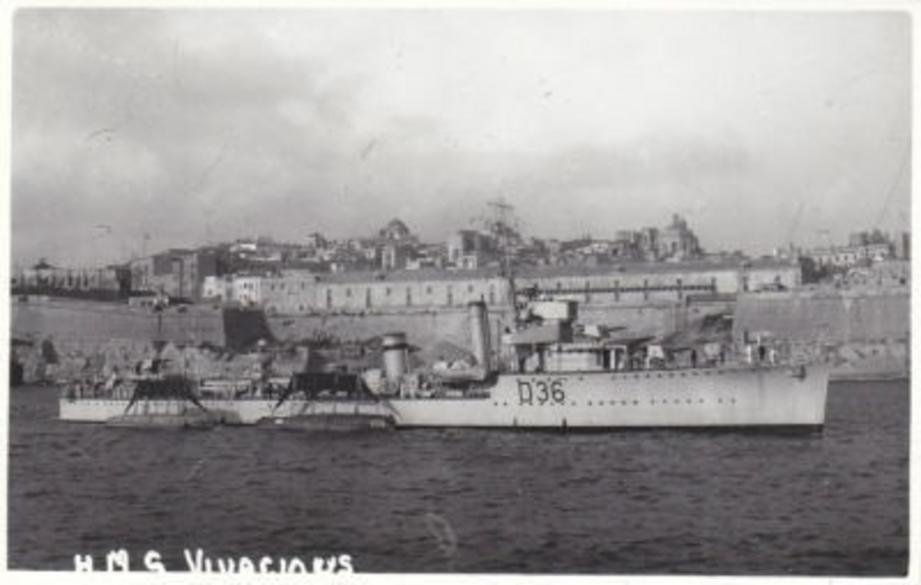 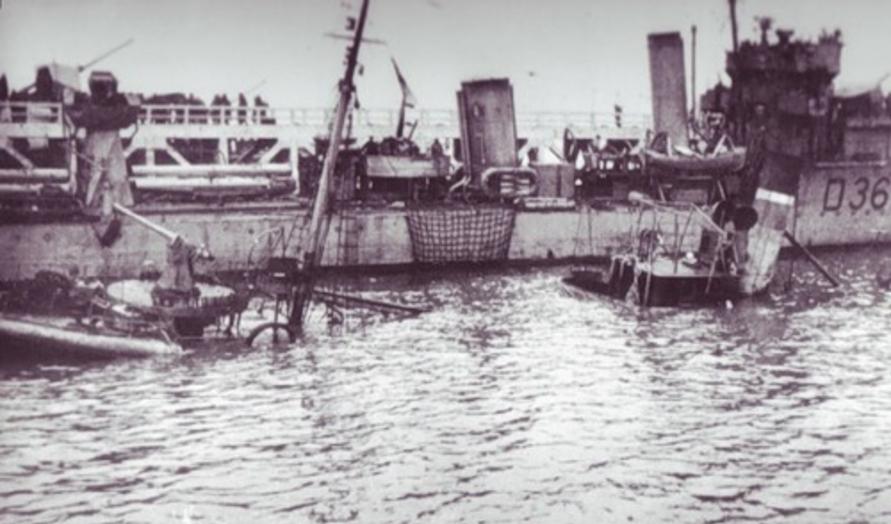 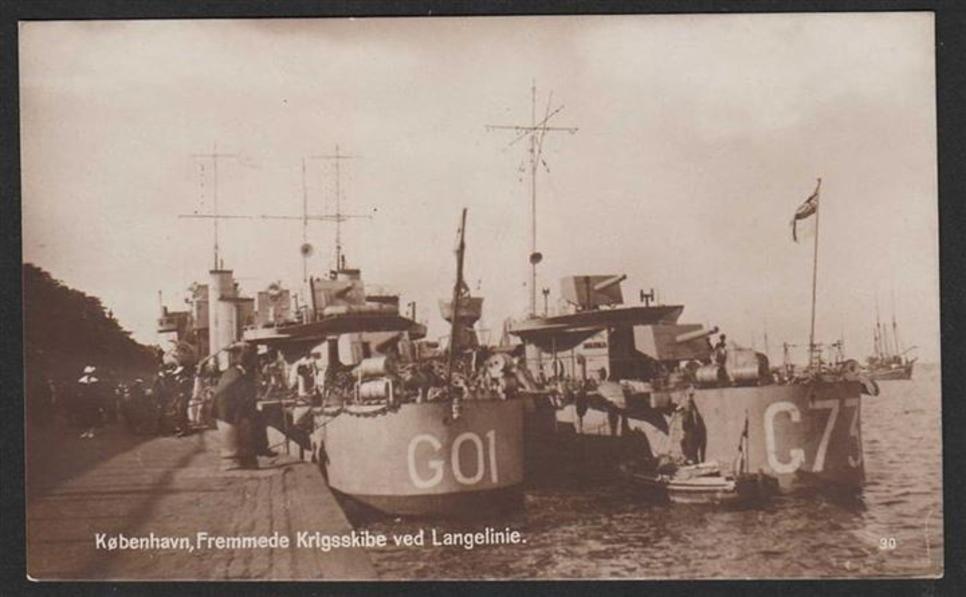