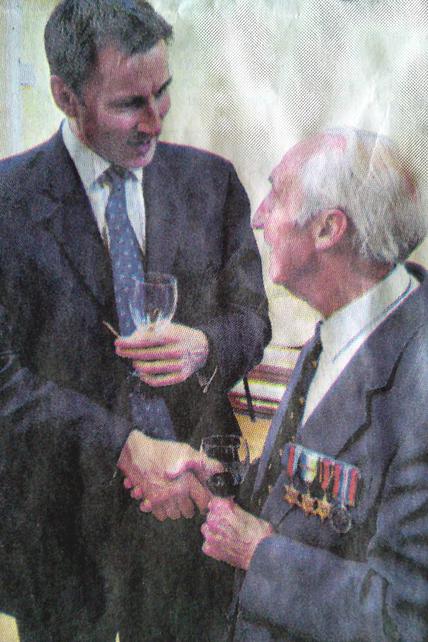 20 June 40. Transported evacuees from Guernsey to Weymouth. Between 20 and 28 June 1940, 17,000 people, (almost 50% of the population), were evacuated from St Peter Port’s Harbour First to leave were 5,000 children with their teacher’s adult helpers.

26 Oct 1940. Requisitioned and converted to a Barrage Balloon Vessel.

25 Nov 40. A shell burst under her port bow shower her with splinters killing Sub Lieutenant John M. Chambers and wounding another.

27 March 1945. Paid off and refitted for cross channel ferry service to the Channel Islands.

23 June 1945. The Haslemere was the first Southern Rail vessels to arrive at Jersey after WW2.

The Haslemere had was involved in a number of collisions during her lifetime.

Sep 27. Collided with a yacht owned by a Maharajah in Southampton.

December 29. Collided with a tug leaving Honfleur (near Le Have, France)

Nov 31. Damaged her rudder and propeller at St Malmo.

Nov 45. Struck rocks after leaving St Peter Port and was under repair for the next five months.

Dec 55. Was in a collision with the Winchester and had her steering damager.

“Munity” on the Hazelmere.
The tradition in the Royal Navy was to give every sailor a rum ration (or tot of rum) at midday. On the smaller ships this rum ration was always “neaters”, (neat rum 95.5 proof). On the Hazelmere this rum ration was unexpectedly changed to an issue of “grog”. Grog is one-part rum mixed with two parts water. This was extremely unpopular with the crew of the Hazelmere but the only way to protest was to empty their grog into a bucket which was taken to the first lieutenant and emptied over the side. The Coxswain came up with an exceptional arrangement where the crew would drink their neat rum followed by two tots of water. Later the water was forgotten.

BAR TO DISTINGUISHED CROSS. A bar to his DSC was awarded to Boatswain Victor Pretoria Rhind on the 28 November 1944 for services during Normandy landings. 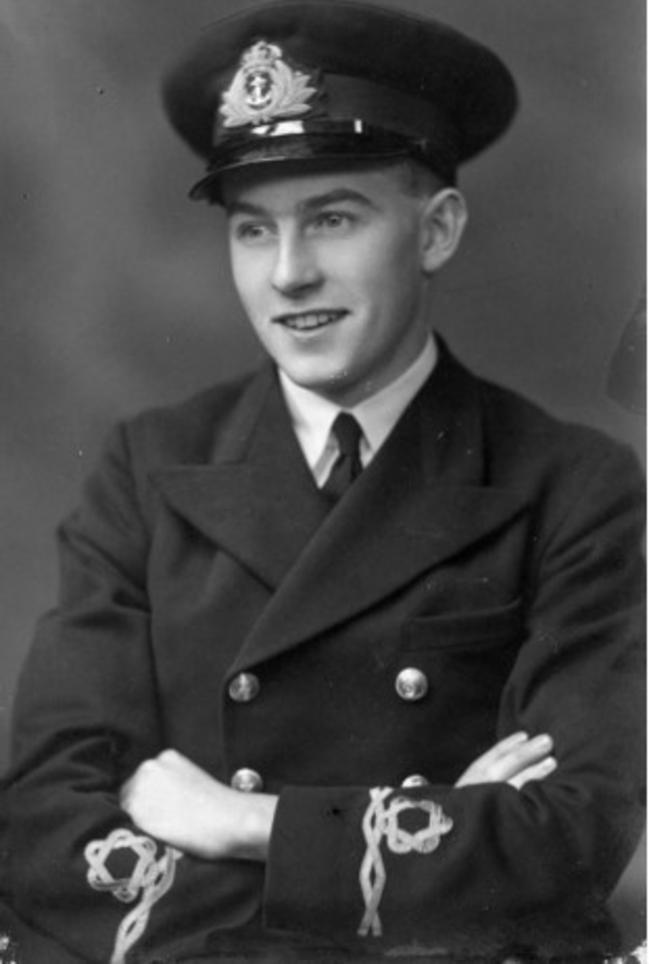 Even before the Haslemere became a Royal Navy ship she was twice requisitioned by the Admiralty. In September 1939 she transported troops and supplies of the B.E.F. (British Expeditionary Force) to France and in June 1940 she took evacuees from Guernsey back to Weymouth.

Balloon Vessel HMS Haslemere was escorting Convoy CE.21, which had departed St Helens Roads on 4th January 1941 and was due to arrive at Southend on 5th January 1941.

While steaming up the Thames Estuary crews of ships in the convoy saw a plane crash and its pilot parachute into to sea. Royal Navy escort ships including the Haslemere searched for survivors from the plane crash.

Crew on board the HMS Haslemere thought they heard a woman’s cries and attempted to rescue a person in the rough sea. A second person was also thought to have been seen, but this later turned out to be a luggage bag.

A rope was thrown, but the person in the sea was too exhausted or too numb from the cold to take hold of it.  Seaman Raymond Dean climbed down over the ships side at the stern and tried to grab hold of a motionless person in the sea. The person in the water was only feet away when the stern of the Haslemere suddenly rose and fell violently in the stormy sea.

The person had vanished. The captain of the Haslemere, Lieutenant Commander Walter E. Fletcher, dived into the freezing sea in an heroic but vain rescue attempt.

​This person turned out to be Amy Johnston the famous aviator.

A boat was launched from HMS Haslemere but in the poor weather conditions and strong tide were unable to reach Lieutenant Commander Fletcher.

Lieutenant Commander Walter E. Fletcher never regained consciousness and died a few days later in the Royal Naval Hospital at Gillingham. He was posthumously awarded the Albert Medal in May 1941.

To find out more about Amy Johnson go HERE http://www.wildfire3.com/amy-johnson.html

In May 1943 the Haslemere became the Commodores Ship. A Commodore was a rank above captain and was responsible for the overall operation of Merchant Navy ships in a convoy.

D-day 6 June 1944. HMS Haslemere together with HMS Meynell and the Corvettes Camellia and Charlock escorted Convoy ETM1 to the Normandy Landing Beaches. Convoy ETM1 included 12 Liberty Ships.  On arrival at Gold Beach she acted as Mulberry “B” (a temporary portable harbour.) Control, Receiving and Headquarters ship for Bombardem Floating Breakwaters (designed to protect the Normandy anchorage from the effects of weather) Phoenix (Phoenixes were reinforced concrete caissons, large square boxes floated into place and sunk to form a Harbour) and Whales (These were piers used as floating roadways that connected the pier heads to the beach) and a Headquarters ship for Plankers and Sappers. 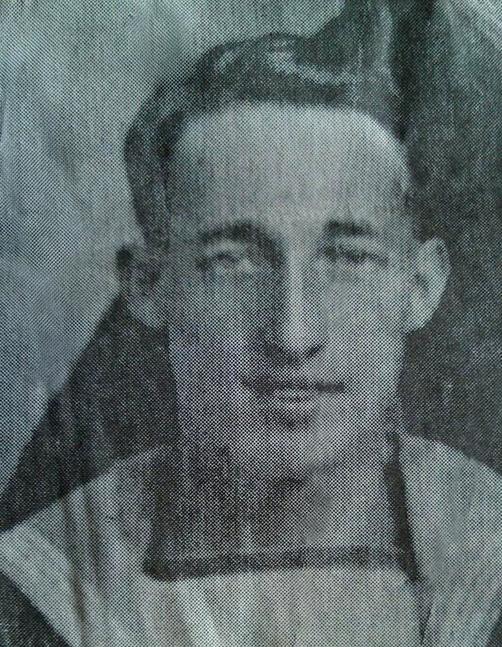 The Haslemere. Note the projection on the stern on which the crew stood in an attempt to rescue Amy Johnson.
​(Known as  belting, its purpose is to act as a fender and strengthener to protect the ship’s side from damage caused by contact with the quay. (Thank you to Ian Moignard for this information.)

Sub Lieutenant  John Minta Chambers killed by a shell blast on 25 Nov 19 40 on board HMS Haslemere.  He was the only son of Thomas Chambers, a farmer at Normanton le Cliffe, near Grantham, Lincs. (Photograph by kind permission of  Henry Lord  (cousin)

His son Andrew tells us, "My father served on HMS Haslemere and still recalls his time in the Navy with pride (at 98). 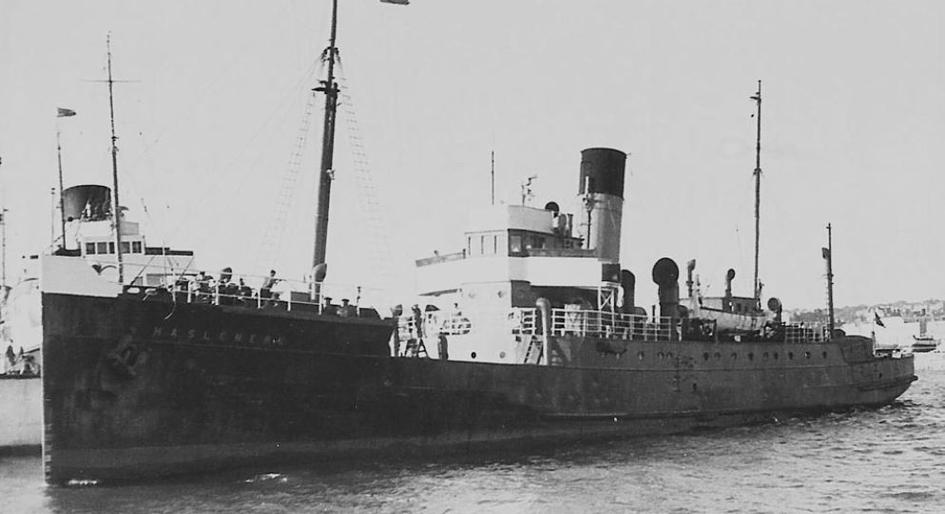