Lt A. H. Manwaring and a number of ratings were lost; Lt D. H. P. Gardiner and S/Lt E. Flint R.N.R, were wounded. Amongst those lost were: 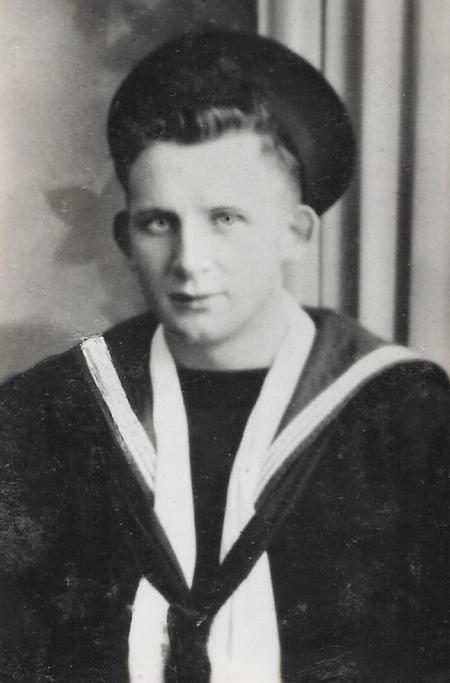 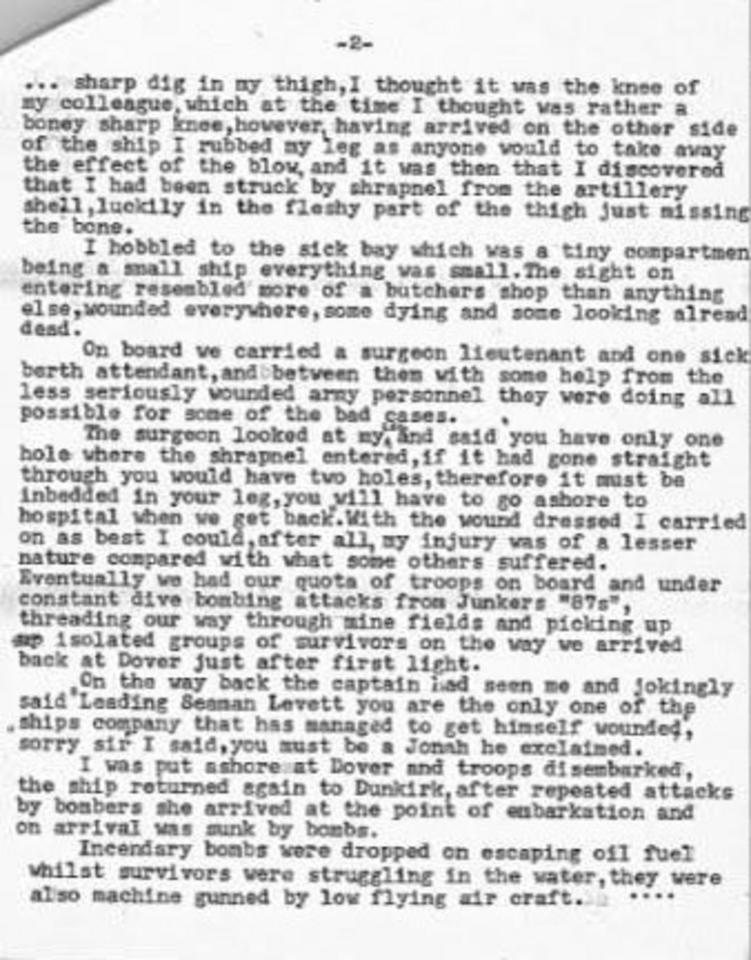 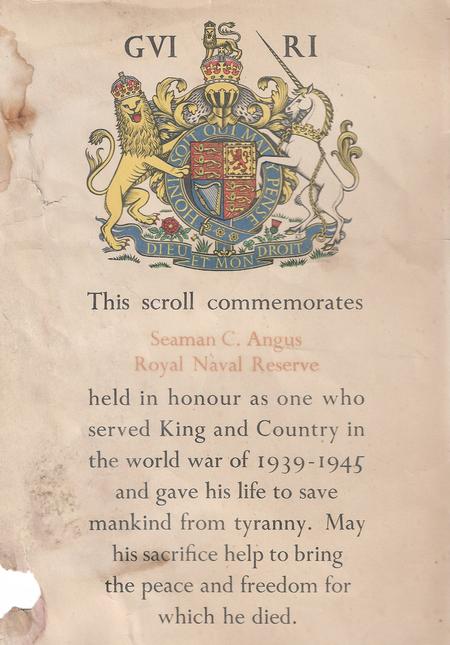 ​SEAMAN CHARLES ANGUS, Hero of Dunkirk, who gave his life so that others would live and return to England to fight again and eventually win the war.

Surgeon-Lieutenant. Noel Fox and Barbara at their wedding in Sydney on the 1st June 1946.

Surgeon-Lieutenant Noel Fox, was Mentioned in Despatches for his actions in tending the wounded while under enemy fire on HMS Mosquito at Dunkirk. (Allowing him to wear the bronze oak leaf emblem on the Victory Medal ribbon when worn on a bar.)

Raised by his mother in Australia, Noel studied medicine at Sydney University. He went to England to study to be a Surgeon. When World War Two broke out, with no Australian ships available,  Noel joined  the Royal Navy.

Noel would remember all his life, the kindness the English people showed him on his return to England after the sinking of the Mosquito.

Noel would go on to serve aboard the V & W-class Destroyer, HMS Vanity, for the rest of the war. When the war in Europe ended, Noel returned to Australia in readiness to take part in the Pacific war.

Les Levette recalls having a shrapnel injury to his thigh and being treated by Surgeon-Lieutenant Noel Fox. He goes on to recall “I hobbled to the sick bay which was a tiny compartment, being a small ship, everything was small. The sight on entering resembled more of a butcher’s shop then anything else, wounded everywhere, some dying and some looking already dead.”

Like others who were at Dunkirk, he also remembers survivors  being machined gunned in the water by German planes. 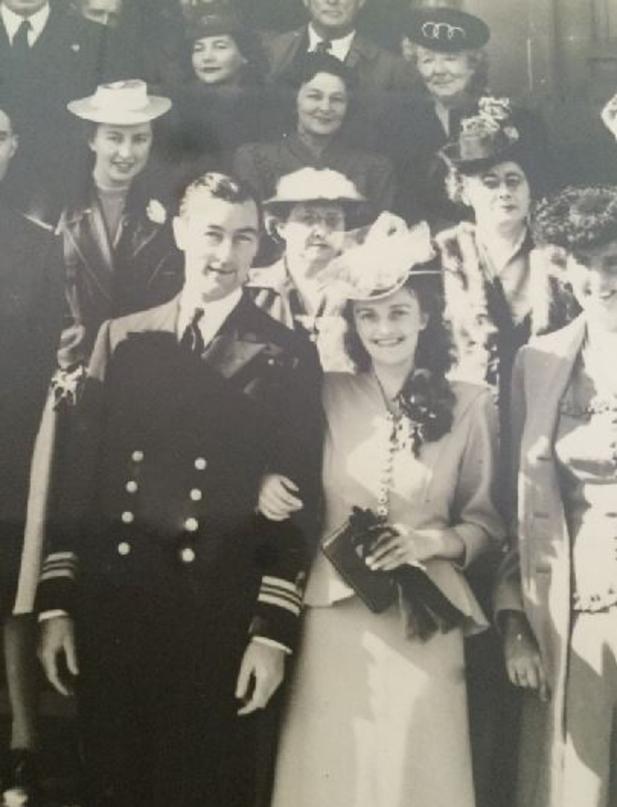 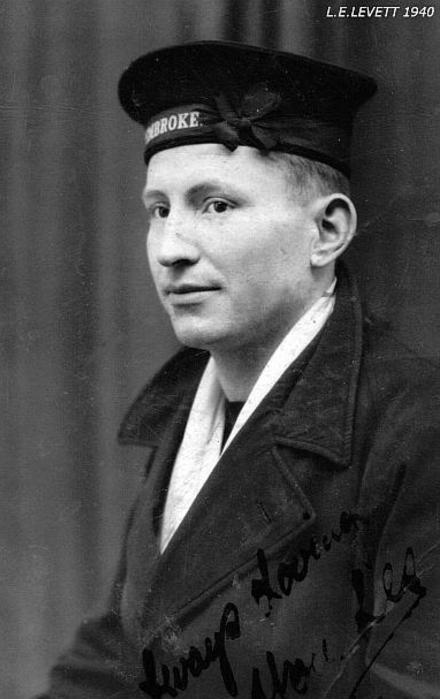 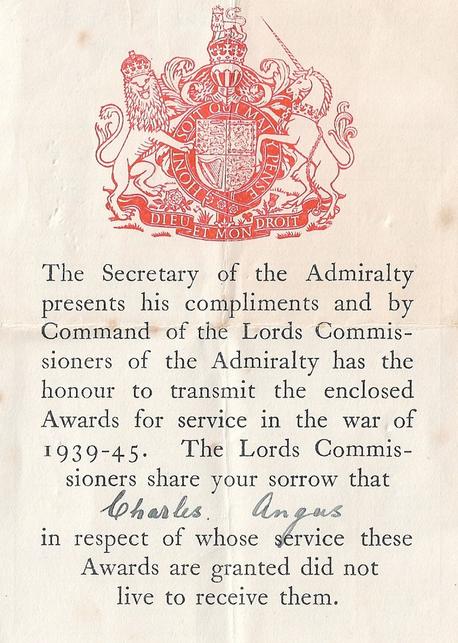 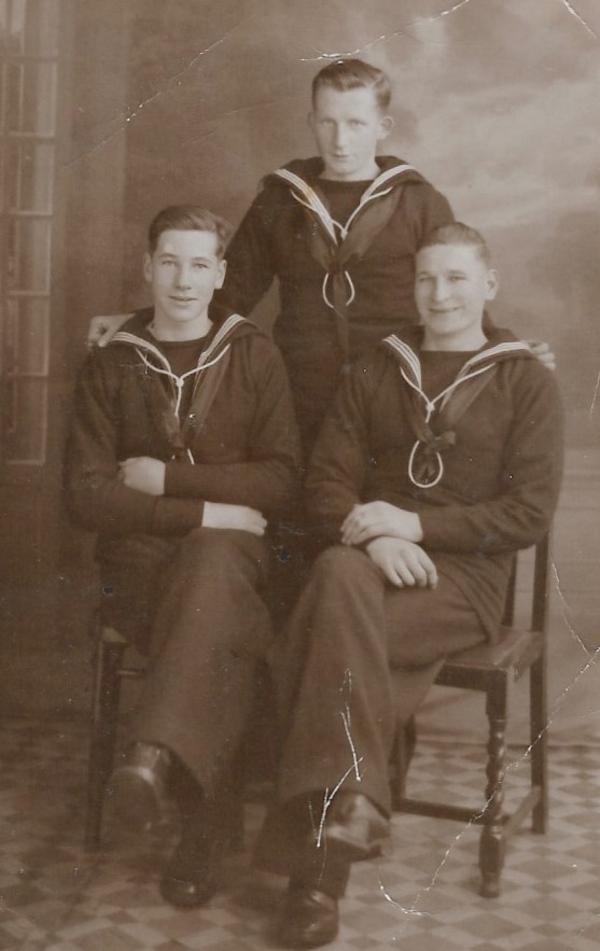 Sent to Charles on his last Christmas.

Leading Seaman Les Levett who was wounded on HMS Mosquito at Dunkirk. His account of the Mosquito's part in the Dunkirk evacuation can be seen below. (photograph by kind permission of his son Marc Levett) 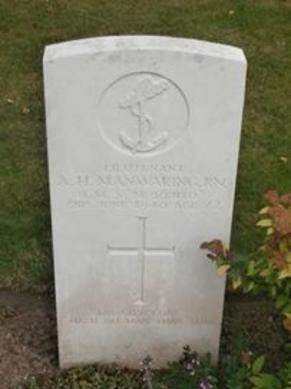 Account of the Mosquito at Dunkirk by Les Levett

On 1st September 1935 Anthony passed out from a naval cadet to a Midshipman aboard HMS Enterprise; on 1st May 1938 he joined HMS Forester as a Sub-Lieutenant and on 1st September 1939 he was promoted to Lieutenant aboard HMS Sussex. On the 19th March 1940 he joined HMS Mosquito on, effectively, her maiden voyage and was killed on 1st June 1940 evacuating troops from Dunkirk; when the Mosquito was sunk. 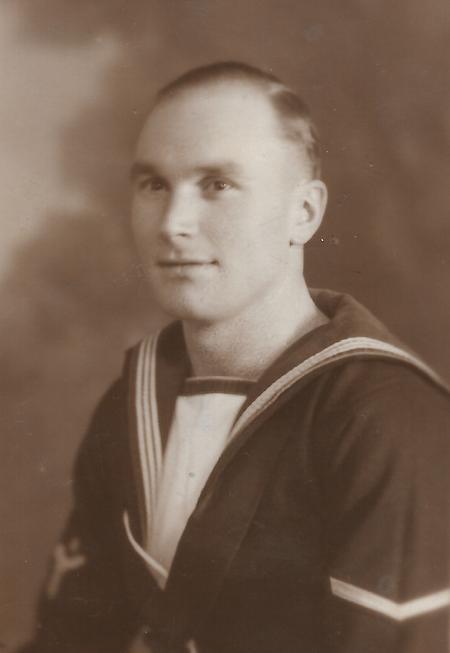 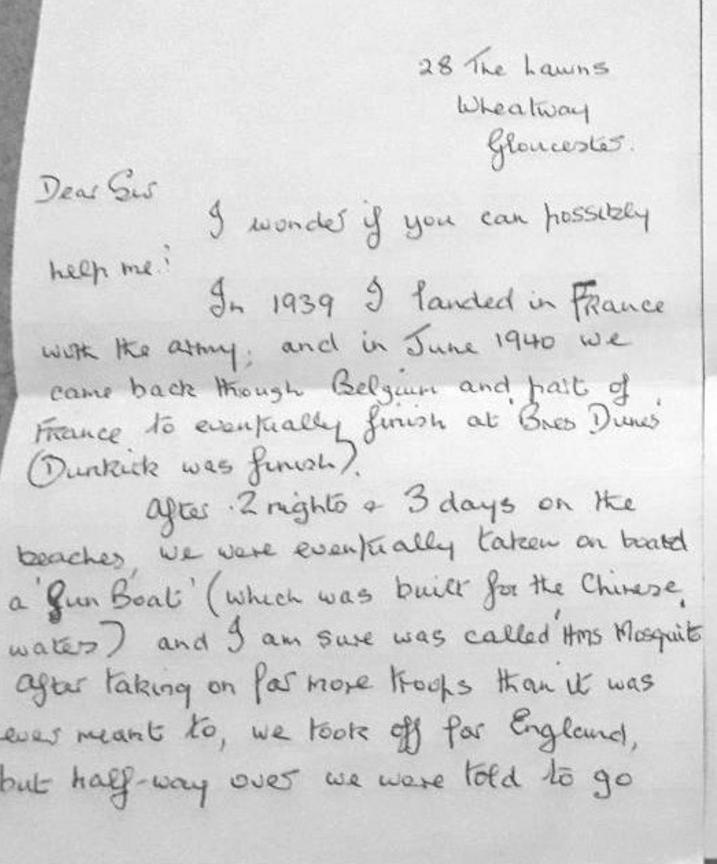 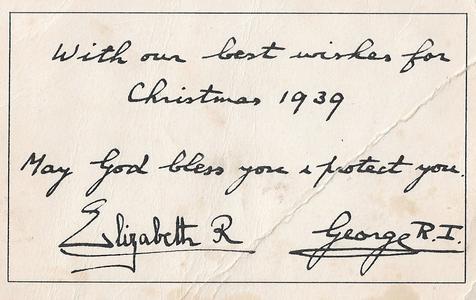 ​A LETTER FROM HUBERT THOMAS KILMISTER.

Hubert Thomas Kilmister was part of the British Expeditionary Force which was sent to France after the German invasion of Poland on 1 September 1939 and Great Britain declared war on Germany. Hubert was rescued from Bray-Dunes, Dunkirk by HMS Mosquito. After his return from Dunkirk, Hubert would be posted to North Africa to become one of the famous “Desert Rats”.

Letter by kind permission of his daughter Linda Ray.

On 8th January 1934, John William Fishlock volunteered to join the Royal Navy for 12 years. John trained as a stoker and became a Stoker Petty Officer at Chatham on 21st February 1940.

Petty Officer John William Fishlock served onboard HMS Mosquito and was on her when she went to Dunkirk.

Mosquito was a River Gun Boat and as such had a shallow draught and was able to get close to the beach at La Penne which is a few miles east of Dunkirk. Loaded to capacity with troops, on her return journey she came under heavy attack from German aircraft and further along the coast from shore batteries.

Mosquito disembarked her troops at Dover and took on fuel and ammunition before returning to Dunkirk.

At Dunkirk the Mosquito again took troops off the beach. It was slow work and time after time she came under air attack. Mosquito successful disembarked a second lot of troops at Dover.

On the first of June 1940 returning to Dunkirk for the third time, the Mosquito was dived bombed with several near misses causing damage. Later, off the beach at Dunkirk twenty-four Stuka dive bombers attacked in waves out of the sun.

​Below deck Petty Officer John William Fishlock was going about his duties when the bombs hit the Mosquito.

Seaman Charles Angus, C/X 20402A, served on HMS Mosquito. He died age 22 on Saturday 1 June 1940 when the Mosquito was bombed while rescuing troops from Dunkirk.

At around noon on the 1st June 1940 a large number of Stuka dive-bombers attacked the Mosquito dropping their bombs and machine-gunning the Mosquito.

A bomb struck the Mosquito damaging her beyond repair, setting her on fire, killing  eight of her crew a wounding a number of others. 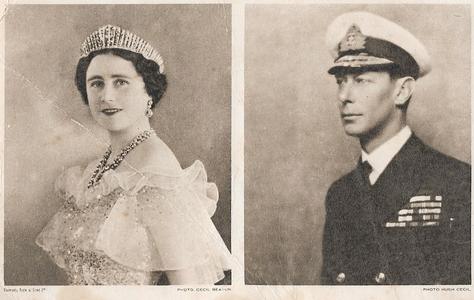 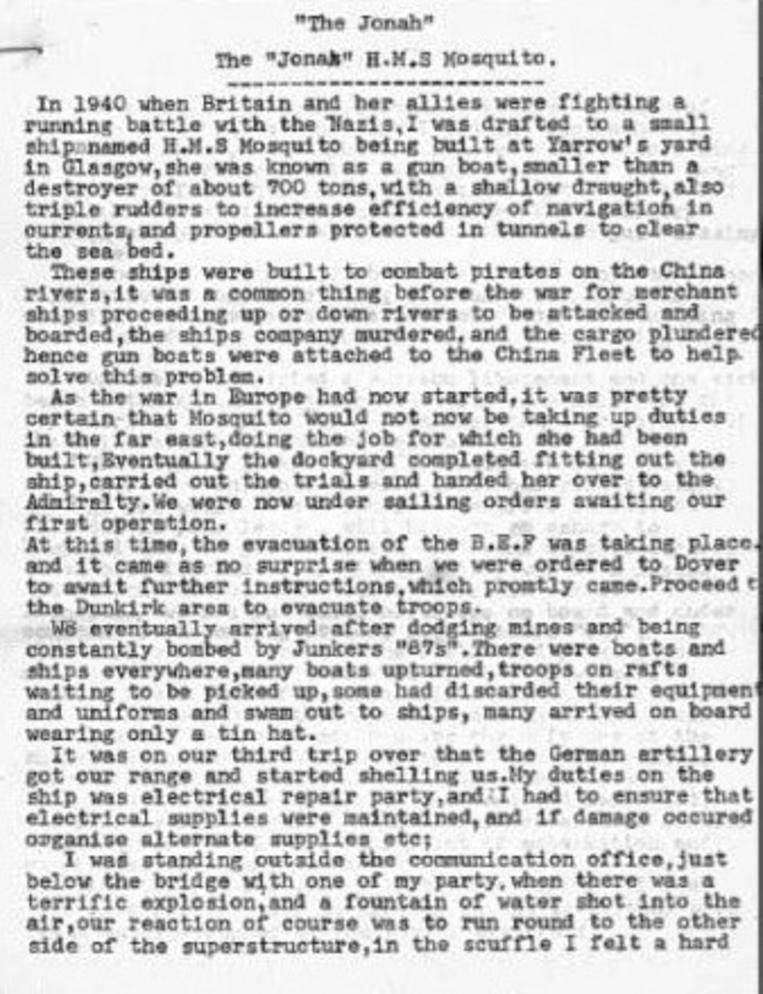 HMS Mosquito had a short but gallant life of only six and a half months.

27 May 40. Gunboat HMS Mosquito with sister ship HMS Locust arrived at Sheerness from Portsmouth. They were based at Sheerness as anti-aircraft ships in the Thames Estuary and for escort duties in the North Sea and English Channel. 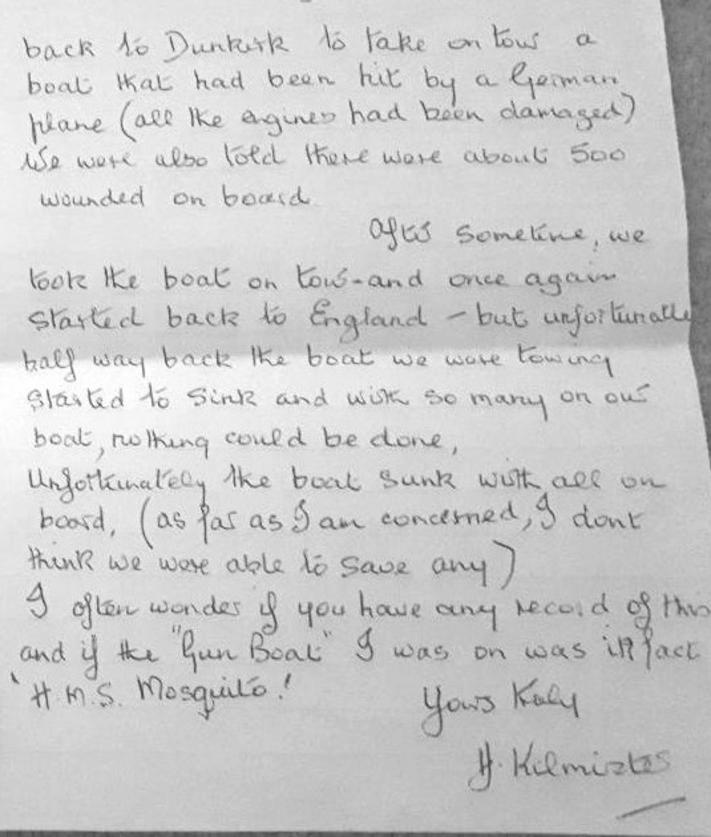 John was wounded, hit in the head by shrapnel. He knew the bomb had caused severe damage from which the Mosquito would not recover. He staggered up to the deck to find it in complete disarray. Damage, wreckage wounded and dead men were everywhere. Seeing the anti-aircraft gun out of action with its crew dead or wounded, John took control of it and returned fire at the Stuka dive-bombers.

The Mosquito sank quickly and John found himself in the sea.  The enemy planes continued to attacked, strafing men in the sea with machine gun fire.

John couldn’t remember much of what happened after that.

Back in England, John’s wife received a telegram saying he was missing. Much to her relief another telegram from the Matron at  Dover hospital followed. It read, "HUSBAND CASUALTY. HOSPITAL. PLEASE VISIT."

​Doctors couldn’t remove the shrapnel from John’s head. He remained at HMS Pembroke until 20th November 1940 when he was discharged as Physically Unfit for Active Service.

Despite his wound John was a barrel-chested man who always looked physically fit but did have blackouts from time to time. The shrapnel remained in his head until he died, at the age of 81.

28 May 40.Midday May the 28th 1940 the Officers assembled on the Bridge of the Mosquito. HMS Mosquito, a River Gun Boat with only five feet of draft was brand new, straight off the slipway. Only the day before anti-aircraft Guns had been installed. The assembled men, until that moment, had not known about Dunkirk. “O.K. men,” said the captain after reading the orders. “We’re going to Dunkirk to rescue the army!”

Some hours later the Mosquito was off the beach at La Penne having navigated through the channels in the mine barrage.  Lieutenant Gardiner ran the shallow draft gun boat close in to the beach. The medical Officer Lieutenant Noel Fox prepared the sick birth to attend any wounded who may come aboard.

The troops arrive, wet, tired and hungry. With every space crammed to capacity and overloaded with troops the Mosquito headed home to England. In the half light of evening, high above, three enemy planes banked and dived towards the Mosquito. As they bombed and strafed the evacuation fleet every gun on the Mosquito and on the surrounding ships opened fire on the planes and were rewarded when one crashed into the sea.

As the mosquito moved out into the deeper channel the shore batteries opened up with renewed vigour.

With the onset of darkness, the danger was no longer from bombs. The enemy aircraft were dropping parachute mines in the channels. These were magnetic mines which reacted to a ships magnetic field and detonated.

HMS Mosquito landed its precious cargo of British Troops at Dover and enjoyed a few hours of much needed rest while she took of fuel and ammunition.

In the afternoon HMS Mosquito returned to the Dunkirk beaches. She was there all through the night and the next day. It was slow hard work embarking the troops from the beach. Several times artillery shells from shore batteries fell close to the Mosquito rocking her violently and forcing her to move to another position.

The Mosquito returned to Dover to disembark troops, refuel, rearm and grabbing a paltry two and a half hours’ rest.

The Mosquito sailed for Dunkirk again, only forty-five minutes out of Dover and they were dive bombed. The Stuka dive bombers came in twice with bombs exploding close to the Mosquito and holing her below the waterline. The pumps managed to keep the water level down and the Mosquito continued on its way to Dunkirk.

1 June 40. As dawn broke on the Morning of the 1st of June the German air raids redoubled. At five o’clock heavy bombing and strafing attacks developed over the whole area from La Penne to Dunkirk. The RAF arrived but found themselves vastly outnumbered.

At 7.20 a very large force of Junkers JU87 (Stuka) Dive Bombers and Junkers JU88’s with a large fighter force attacked the evacuation fleet. In a few hours four Destroyers had been seriously damaged, two cross channel steamers and a paddle-minesweeper had been lost and all around small ships were on fire and sinking.

At midday the Mosquito arrived off the Dunkirk beaches and began to load Belgium troops. Overhead twenty-four Stuka dive bombers circled and attacked in waves out of the sun.

In a screaming dive the Stuka’s attacked dropping their bombs and machine-gunning the Mosquito. The anti-aircraft guns of the Mosquito and surrounding ships couldn’t cope with the number of enemy planes, even so, it is thought that two were shot down.

A bomb struck the Mosquito damaging her beyond repair, setting her on fire, killing and wounding a number of her crew. The crew of the Anti-aircraft pom-pom gun were all killed or badly wounded. Leading Seaman Ronald Thirwall although badly wounded continued return fire at the enemy.  The aft gun had also been put out of action with all its crew wounded. Able Seaman C. Hirschfield made his way to the gun and single handed fired at the enemy.

The Mosquitoes days at Dunkirk had come to a sudden end. The Officers and crew were rescued by another ship and passing their sister ship HMS Locust, a message was sent to it asking where it had been.

The reply was, “In and out of Hell”

Having made several trips to Dunkirk it was perhaps inevitable that the Mosquito’s luck would run out. Stuka dive bombers came close to sinking her as she returned to Dunkirk. Off the Dunkirk beach at midday on the 1st June 1940 twenty-four Stuka dive bombers came screaming out of the sun. The number of Stuka’s overwhelmed the anti-aircraft gunners. The Mosquito received a direct hit and began to sink almost at once.

When the order to abandon ship was given, Ivor found himself in the sea with other survivors. But the ordeal of the survivors did not finish here!  Enemy aircraft not content with sinking the Mosquito swept low over the sea time and again machine-gunning the survivors in the water. Ivor tried to protect himself by holding a piece of wreckage over his head.

Ivor was picked up by a British vessel, but it too was sunk and he returned to England on a third vessel. He never forgave the Germans for killing his shipmates in the sea.

After Dunkirk Ivor joined HMS Ekins. HMS Ekins was transferred to the 21st Destroyer Flotilla at Sheerness and saw action at D-day.

Ivor stayed with the Ekins until 16 April 1945 when she detonated two ground mines near Ostend, Belgium. The first explosion flooded the engine rooms, bringing the Ekins to a standstill. The second explosion holed the ship in her Asdic compartment. Damaged beyond repair, the Ekins managed to limp back to port.