Crew of the Peter Carey, date not known. 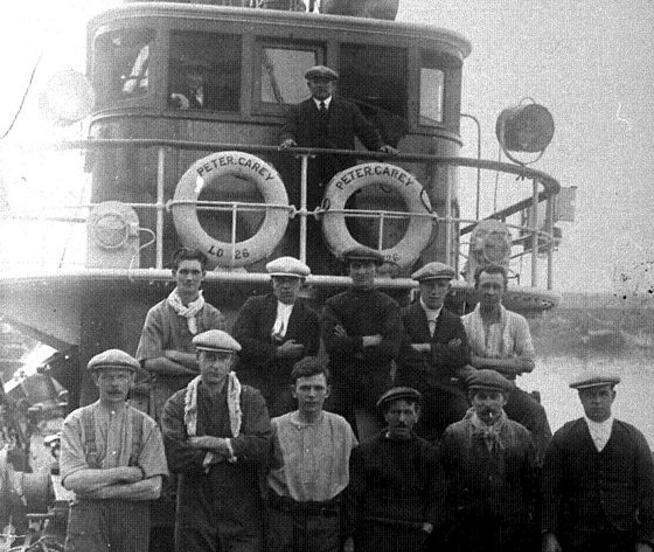 Like all the minesweeper at Wildfire III, Queenborough, the Peter Carey was not only a Minesweeper it was also a fighting ship of war.

During 1940 shipping in the Thames Estuary, along the East Coast and in the English Channel came under heavy attack by German aircraft. Minesweepers, sweeping in straight lines in small groups were easy targets for German planes to bomb and strafe. But the enemy didn’t get it all their own way, the minesweepers fought back.

German fighter planes Bf 109’s and Bf110’s protected the bombers. Most British fighters became engaged by the escorts giving the bombers time to attack shipping in the Thames Estuary and along East Coast.  In all, eight ships were seriously damaged.

A crew member (Vic) tells how he served on the Peter Carey and they had four days a sea and four days on shore. He also tells how they were relentlessly pursued by E-boats (Fast German Torpedo Boats)

On the 1 December 1943 the Peter Carey was escorting Thames Barges, with five other armed trawlers along the English Channel to the Thames Estuary. HM Trawler Avanturine (Skipper Edward Gillard)  having been damaged when grounding off Cuckmere was being towed by the Peter Carey.  Off Beachy Head the convoy was attacked by nine German motor torpedo boats.

Unable to manoeuvre the Avanturine was hit by a torpedo from the S142 and sunk with the loss of all her crew.

12 Oct 40. The Minesweeping Trawler HMT Resolvo struck a mine and sunk North East of Sheerness. The crew were rescued by the Peter Carey.

1 Dec 1943: HMT PETER CAREY was attacked off Beachy Head when towing HMT AVANTURINE. The Avanturine was torpedoed and sunk by the German motor torpedo boat S-142; all her crew were lost.

To find out more of the Peter Carey’s movements go to DRIFTERS AND TRAWLERS.