​A ship detonating a mine, would often sink in a few minutes. It was a matter of luck as to where you were in the ship when the mine went off as to whether you lived or died. On a destroyer, with its thin plating, you could expect about fifty percent casualties, on a smaller vessel such as a minesweeper you really didn’t stand much chance of survival at all.

Look out from Sheerness and you’ll see a flat expanse of open sea. This is an illusion; it is anything but that.  Below the surface it is mainly shallow water, sandbanks and shoals with only a few deep water channels. The principle channels are the Medway channel, passing this side of the Richard Montgomery (the wreck) and the Yantlet Channel passing on the far side of the wreck. The wreck sits on the point of a “V” shaped  shallow sand bank stretching out from Grain. This is the Nore of Nore Mutiny fame.

At any time, your ship could detonate a mine and you would have minutes, often only seconds, to abandon ship. The length of time you could survive in the freezing sea was short. Even if the channel had been cleared of mines there was no guarantee that mines hadn't been dropped by aircraft or were on a delayed timer.

At any time, E-boats could come speeding out of the night firing their machine guns and twin 20 mm cannon and releasing their torpedoes at you.

If the night was clear or you were sailing in daylight, at any time German planes could appear, including the notorious Stuka Dive bomber, to bomb and machine gun.

We will remember them.

Leaving for service under foreign flags: Farewell to the BYMS of the Mine Sweeping Flotillas.
(Illustrated London News Sep 20 1947.) Queenborough 1947. 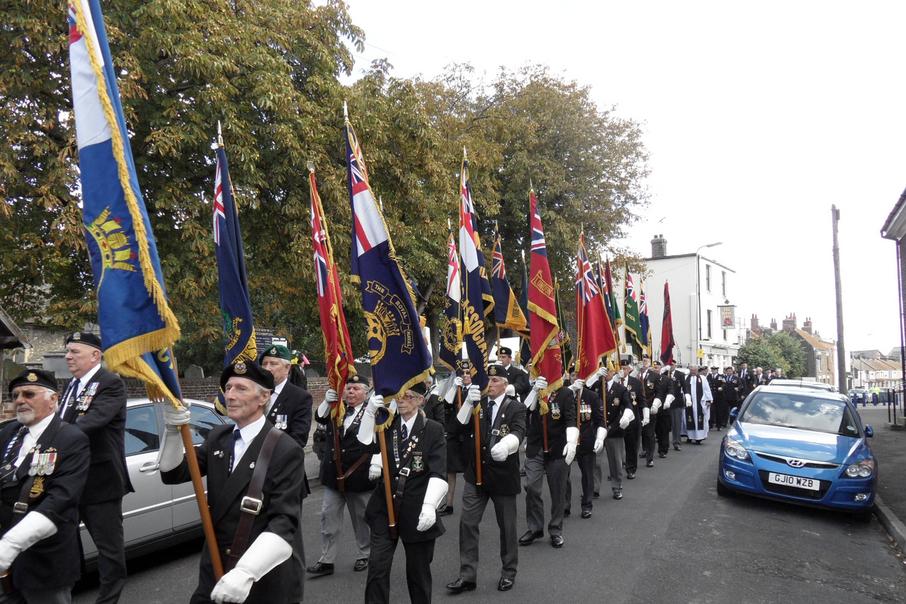 The foremost danger to Shipping in the Thames Estuary and along the east coast of England were mines, mines laid by destroyers, mines laid by E-boats and above all, mines dropped by planes.

Throughout the war there was a continuous technological battle of mine and counter mine, of the German’s developing new kinds of mines and the British finding ways to counter them.

There were the “traditional” tethered mines with horns on them we so often see in movies. It might surprise you to know that the horns weren’t made of metal  which when pushed in  detonated the mine, they were made of rubber with a glass file inside. When the horn bent the file broke releasing a liquid to complete a circuit.

Magnetic mines were a big problem, sinking many ships and taking many lives, until we learnt how to counter them. Magnetic mines were NOT “magnetic” and attracted to a metal ship. They lay on the bottom of the sea and as a ship approached the mine sensed  its magnetic field. Later the Germans introduced reverse pole magnetic mines, acoustic mines and pressure mines all of which had to be dealt with by the Queenborough Minesweepers.

Built in America under the Lend Lease Programme, BYMS's (British Yard Mine Sweepers) quickly began to arrive at Wildfire III, Queenborough. Note the acoustic hammer in the up position on the bow for sweeping acoustic mines and the LL (double L) Cable Reel on the stern for sweeping magnetic mines. 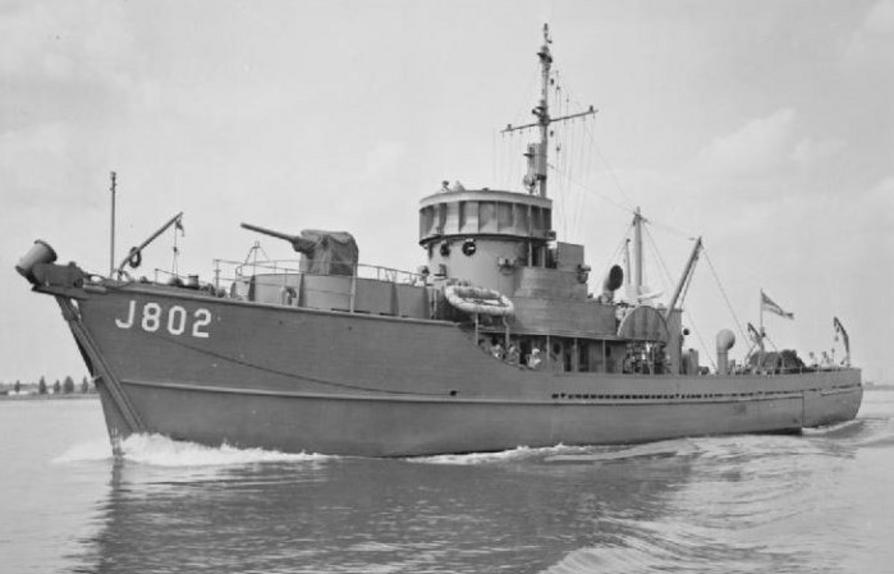 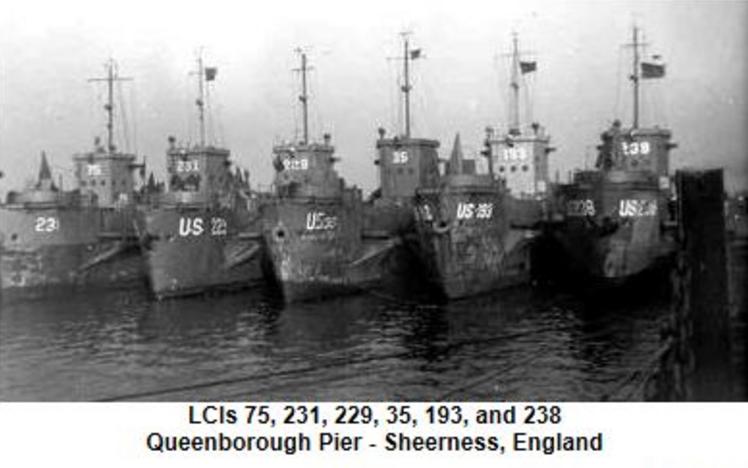 The new, purpose build Minesweeper (MMS, Motor Mine Sweeper) the first to be built, MMS1 was sent to Queenborough.  The 'Kango' (SA acoustic hammer) can be seen in the up position on the bow and the LL Magnetic Sweep reel at the stern.

Landing Craft (LCI ,Landing Craft Infantry) at Queenborough Pier prior to the D-Day landings. These are not the Assault Landing Craft with a flat opening front. These have steps on each side of the bow and landed troops on D-Day plus one. 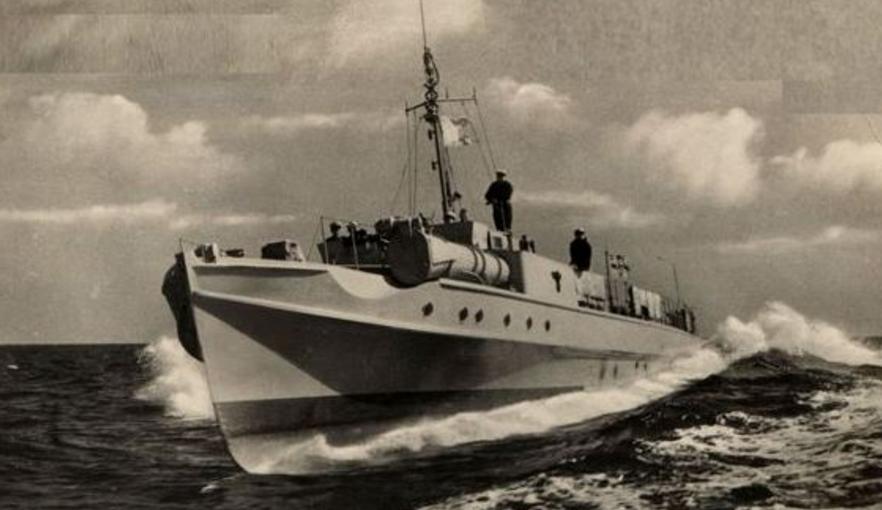 ​​​​Many gave their lives to keep the seaways open. Every day these incredibly brave men were at sea, was fraught with unbelievable danger and immense stress.  Their sacrifice should not be forgotten. To this end their memory is kept alive with this annual Commemoration at Queenborough.

​Please come along and join us at the next Commemorative Service. 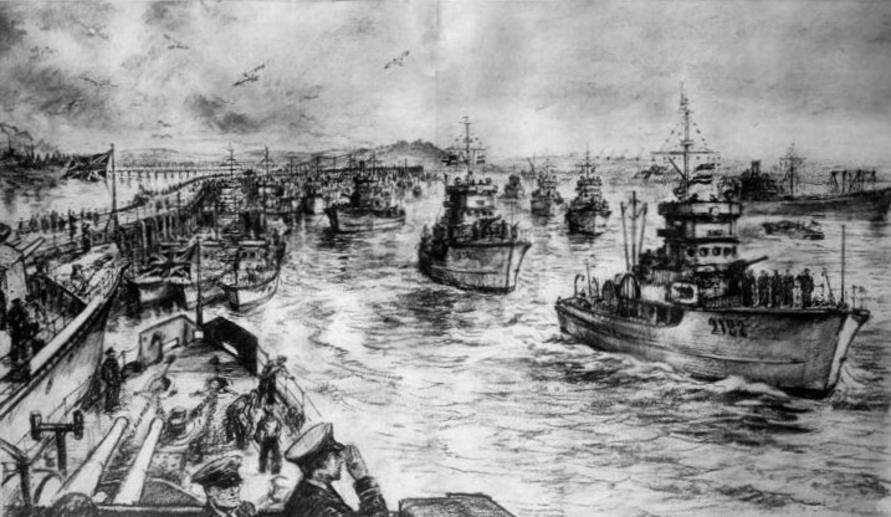 HMS St Tudno, Queenborough Base Ship, (between Wildfire II and Wildfire III.) Note the guns on deck and Barrage Balloon vessel behind. 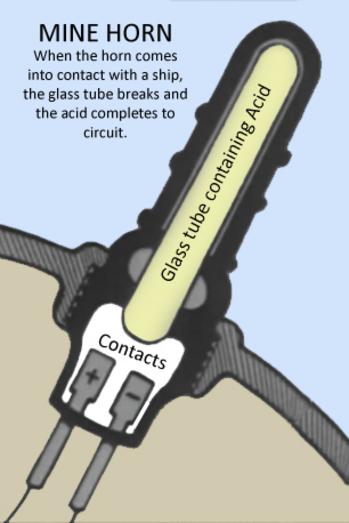 In 1939, at the commencement of World War Two, Great Britain quickly introduced the Convoy system for protecting its shipping from attack by the enemy. Britain’s experiences during World War One lead it to predict that their merchant ships, life blood of the British Isles, would be under threat from attack by German Submarines, surface craft and sea mines. The continued existence of the United Kingdom depended on the safety of the convoy routes. The Destroyer Flotillas and Minesweepers such as those at Queenborough and Sheerness were of the utmost importance.

Between the wars, with much of the money being used for the “heavy ship programme”, (Battle Ships and Aircraft Carriers) the Royal Navy commenced the war seriously short of small ships such as Destroyers. Many of the available Destroyers were World War One vintage. Additionally, the anti-aircraft armament on many Destroyers was deficient and the main armament was not able to elevate sufficiently to fire at aircraft on bombing runs such as Stuka Dive-bombers' (Junkers Ju 87).

Ships of all types were utilized in the war effort. Fishing vessels, “Trawlers” used for deep-sea fishing in the Atlantic Ocean and the smaller “Drifters” using drift nets in the North Sea were fitted out as Minesweepers. Paddle Steamers (and yes there were a lot about in 1939) were also used as Minesweepers and as floating anti-aircraft platforms.

When these ships were requisitioned by the Royal Navy, often their crews would volunteer to come with them. These men would become part of the RNVR (Royal Navy Volunteer Reserve).

It quickly became evident that HMS Wildfire, the Royal Navy’s shore establishment at Sheerness would not be big enough and a second naval base, Wildfire 2 was established in 1939 a short distance away on the Swale at Queenborough. Queenborough had a pier for many years which had been used for cross channel ferries travelling to Flushing in Holland.  An extension to this pier went out from North Road and was “T” shaped with the short arm of the pier extending almost as far as the hard and the long going all the way up to Flushing Pier.

​By 1944 there were more Motor Minesweepers at Wildfire III ,Queenborough, then in the rest of the Nore Command (London, Harwich, Brightlingsea, Lowestoft, Yarmouth and Grimsby) put together. 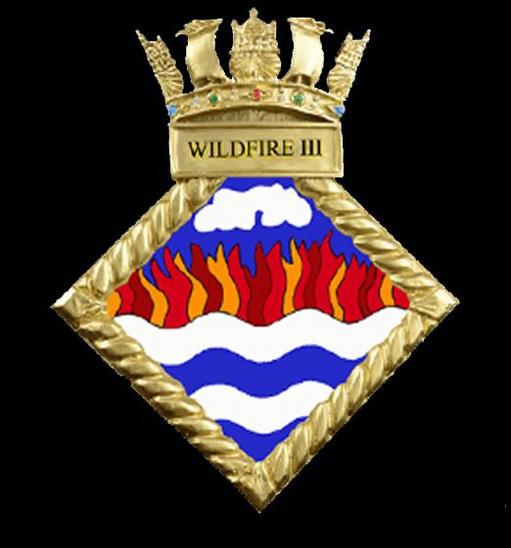 If you, your father or your grandfather has any information, crew lists, stories, photographs, please send copies of them to be added to our records and this website.

If we have made any mistakes on the website, (and seventy year after WW2, I’m sure there are some) pleased let us know and we will do our best to authentic any changes and correct them.

Today, the spirit of Wildfire III and the memory of the brave men who served on the Minesweepers based a Queenborough is perpetuated by the Queenborough and District Navel Ensign Association and the Guild Hall Museum, High Street. Queenborough.

Each year a Commemorative Service is held at Queenborough on the Isle of Sheppey, Kent, to honour the brave men who served on the Minesweepers, based at Wildfire III, Queenborough, during WW2. 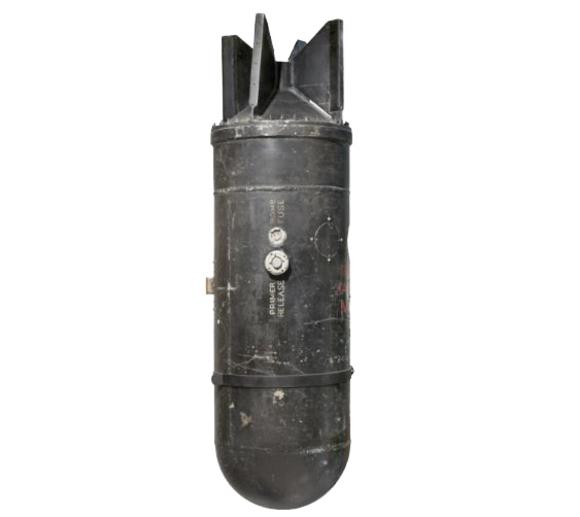 The 21st Destroyer Flotilla was based at Sheerness. Initially, this mainly consisted of V and W Class Destroyers. V and W class destroyers were built during World War One. They had a top speed of 34 knots (39 m.p.h. 63 km/h) and carried torpedoes.

These were supplemented, from 1940 onwards by the versatile “Hunt” class destroyers. Surprisingly the Hunts were slower than the V and W class Destroyers with a top speed of 27 knots (31 mph. 50.9 km/h) and had no torpedo tubes.

By contrast, the German Narvik Class destroyers operating in the North Sea were faster with a top speed of 37 knots (43 mph, 69.5 km/h) were better armed and had torpedo tubes. The German Destroyers would seldom confront the Destroyers of the Royal Navy. Their tactic was to fire their torpedoes at the British Destroyers and turn and run.

New purpose built Minesweeper were quickly constructed to reinforce the Trawler and Drifter minesweepers. The very first of these, MMS 1 (Motor Mine Sweeper One) was to go to HMS Wildfire III at Queenborough. 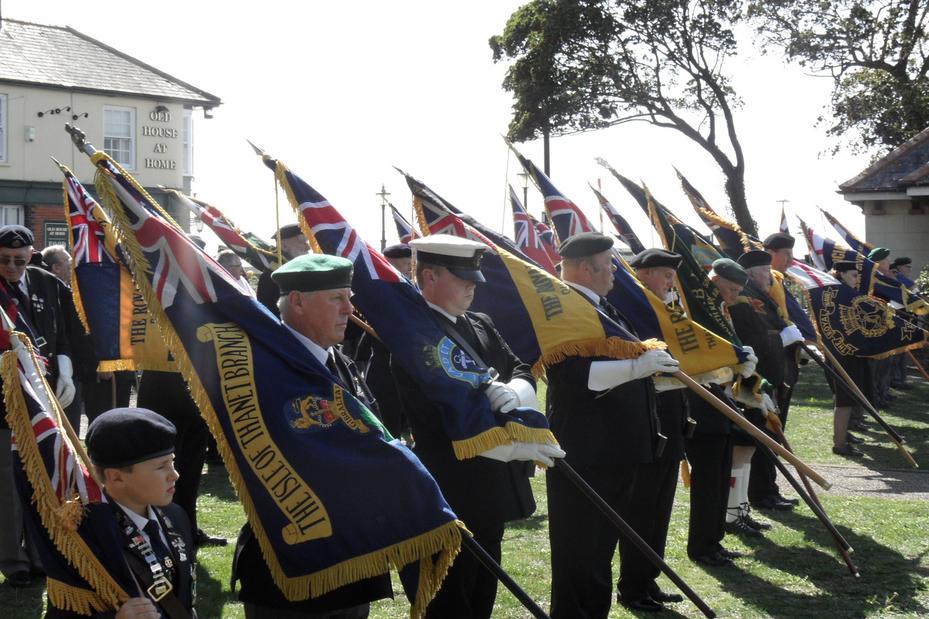 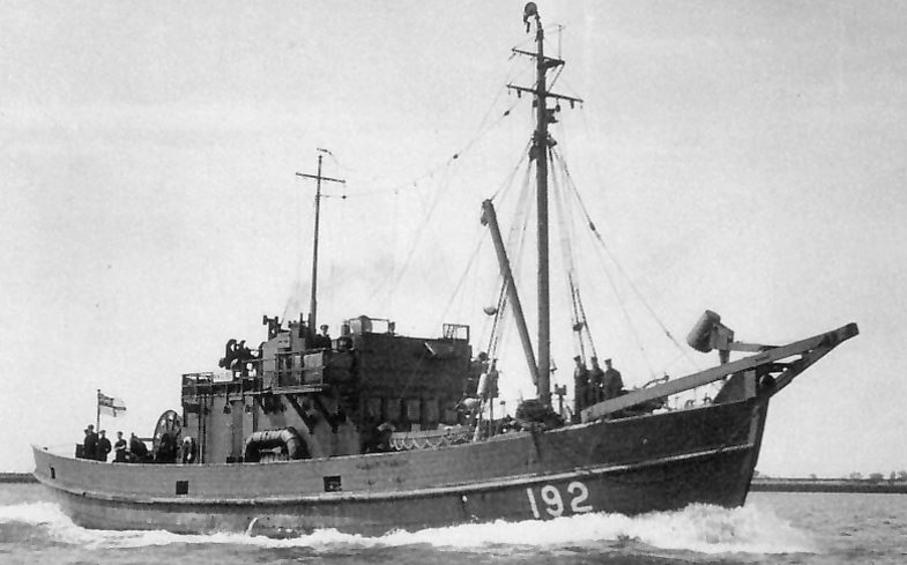 Magnetic mines would be dropped by parachute.

During World War Two, the Wildfire Naval base at Sheerness, had 3,000 personnel afloat and 1,300 ashore. Sheerness Dockyard had three large basins, with three dry-docks in the Great Basin and two in the Lower Chamber and employed 4,000 civilian workers.

​Although Britain had the biggest Navy in the world it still wasn’t big enough for the demands put upon it.

It was the job of the Queenborough Minesweepers to keep the sea lanes open. It was the job of the Sheerness Destroyers, amongst many other task, to protect the convoys of merchant vessels. When Britain “stood alone” the Queenborough Minesweepers and the Sheerness Destroyers kept the sea lanes open allowing the raw materials, not least amongst these, coal, to come flooding into the South East of England and to the Thames Power Stations.  Today it seems surprising that men would risk their lives for coal, but in 1939 there simply weren’t enough trains to deliver it all. We required coal for home heating, coal for trains, coal for steam ships, coal for power stations, coal for steel mills. We needed coal to make the guns, tanks, ships and planes we desperately required to survive.

It was Wildfire III at Queenborough and Wildfire at Sheerness which gave Britain the breathing space it needed to recover after losing all its equipment at Dunkirk.   Later in the war, they allowed the build-up of war materials in the south of England resulting in the successful invasion of Europe by the Allies.

In addition to keeping the sea lanes open, the men and vessels from Wildfire III and Wildfire played a significant role at Dunkirk, Dieppe, D-Day, the Battle of the Scheldt. and the Relief of Holland.

Germany did everything it possible could to close these sea lanes and by so doing starving London and the south east of vital raw materials and war supplies. The incredibly brave men of the Royal Navy and the Merchant Navy paid a very high price for keeping the sea lanes open with over three hundred ships being sunk in the Thames Estuary alone. We should never forget them

Surprisingly, the main danger to shipping in the Thames Estuary and on the East Coast was not from submarines, although many ships were sunk by torpedoes. The coastal water of the South East, with its shallow sea, sand banks and shoals was difficult for German U-boats.

The Luftwaffe (German airforce) would target shipping, bombing and strafing. Minesweepers, sweeping in straight lines, were always targeted. But minesweeper didn’t just sweep, they fought back. Minesweepers were fitted with guns and even on occasion shot down German aircraft.

Schnellboots (Fast German Torpedo boats, the British called them e-boats, “e” for enemy) where another danger. They would swoop out of the darkness firing their guns and launching their torpedoes. The E-boat attacks were so frequent that the sea lanes along the east coast and into the Thames Estuary become known as E-Boat Alley