No Officers other than Engineer listed in Navy List.

HMS Cottesmore was laid down on 12th December 1939 and launched on 5th September 1940. The Cottesmore was adopted by the County of Rutland in March 1942.

The Cottesmore Hunt after which HMS Cottesmore is named is still in existence today. It is one of the oldest in Britain and its origins can be traced back to 1666. It is named after the village of Cottesmore, in the East Midlands where the hounds are kennelled. Cottesmore is pronounced "Cotts moor" as a result of its origins as Cotts Moor.. 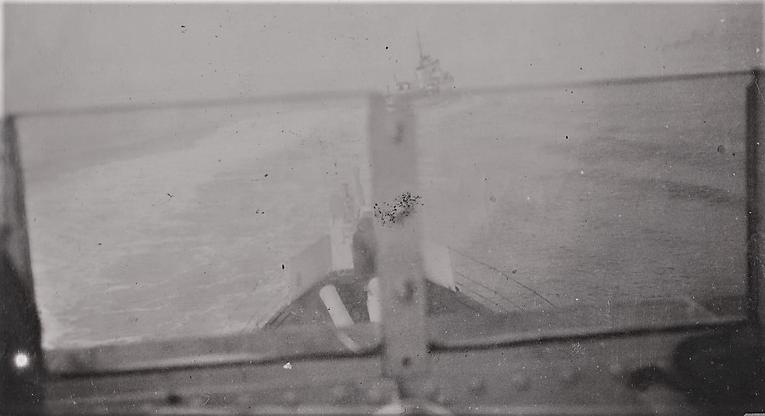 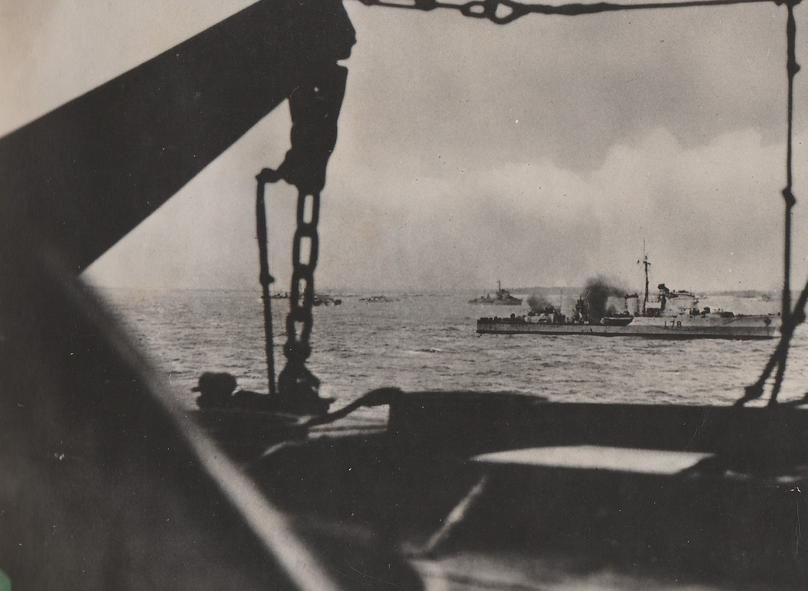 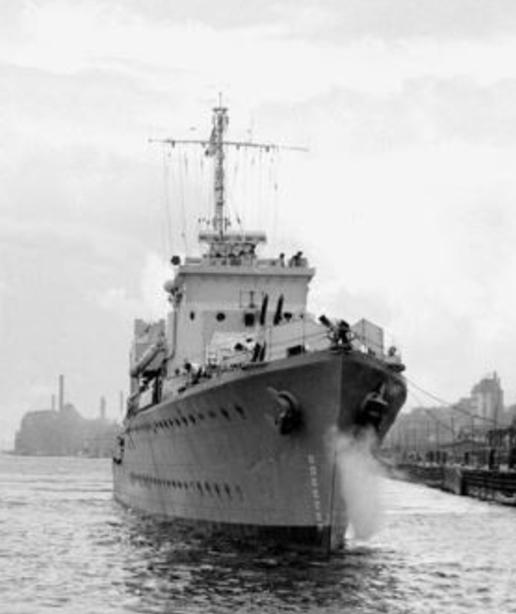 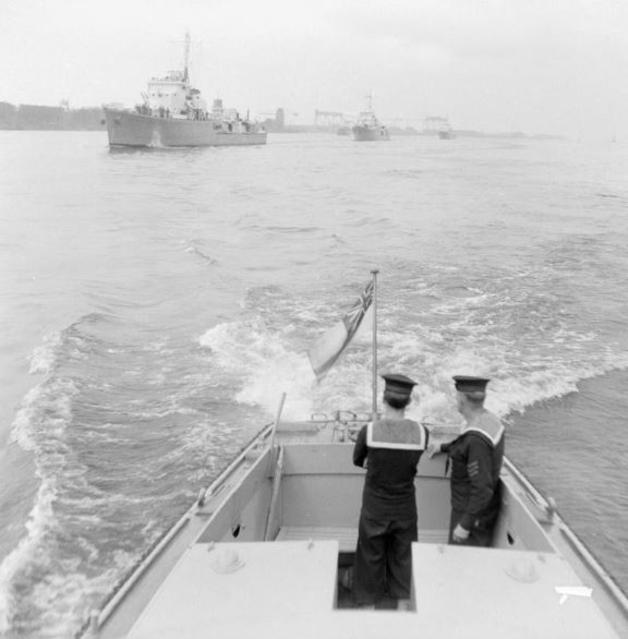 On a Field Red, a lozenge Gold charged with a fret Red, surmounted by an annulet Black.

After undergoing his training at several Royal Navy shore establishments and HMS Iron Duke at Scapa Flow, Bill joined HMS Cottesmore on the 14 May 1943 and was there until 31 August 1945. Bill was an Anti-aircraft Rating and on D-day, off Gold Beach, he gave covering support to the Canadian troops.

The 21st Destroyer Flotilla, based at Sheerness , on manouvers. Note, the "Bow Chaser"  on HMS Cottesmore. Photo by kind permission of Roger Brownless, whose father, John Malcolm Brownless, served on her.

From John Malcolm Brownless photo album entitled "Panic Stations, Western Approaches" and may be from this action.

May June 1945. After the defeat of Germany the Cottesmore was deployment in support of occupation troops and convoys.

HMS Cottesmore was sold in 1956 to the Egyptian Navy. After a nine-month refit at Cowes she was renamed IBRAHIM EL AWAL. The ship remained in the Egyptian Navy under two other names MOHAMED ALJ EL KEBIR and PORT SAID. She was used as a training ship until 1972 and then scrapped.

When the order came to attack the German Battle Fleet HMS Cottesmore like many other Destroyers, Motor Torpedo boats and Bombers were given insufficient notice. HMS Cottesmore went in pursuit of the German battle fleet but was too far behind to catch the German armada.

17 March 1942. Drove off attack by E-Boats off Lowestoft with other escorts.

26 July 1942.  HMS Cottesmore together with HMS Calpe and two Motor Gun Boats where on patrol in the English Channel off the French coast.  Off Cap de La Hague 15 miles N.W. of Cherbourg they intercepted an enemy coastal convoy.  The convoy ships scattered and fled to port. During the pursuing battle Vorpostenboot VP202 the Hermann Bosch was sunk and Vorpostenboot VF203 the Karl Rover was severely damaged and caught fire. The Hermann Bosch made it back to Cherbourg but would take a year to repair.

Vorpostenboot  also known as VP-Boats or Flak-ships were German patrol boats which were used around coastal areas and on  patrols, escort duties and naval combat.

13 Oct 42.  13 Oct 42.  HMS Cottesmore Deployed with Destroyers HMS Quorn, HMS Albrighton, HMS Eskdale and two MTB Flotillas intercept the German auxiliary cruiser Komet as together with an escort of E-boats it tried to pass through the English Channel into the Atlantic. The Komet had attacked British merchant ships in the Pacific Ocean sinking seven and was armed with six 15 cm guns, one 7.5 cm gun, one 3.7 cm and four 2 cm AA guns, as well as six torpedo tubes. She also carried an Arado 196 A1 seaplane.

The MTB were the older type and unable to keep up with the destroyers. HMS Cottesmore sighted the enemy ship at one o’clock and fired a star shell which illuminated a large ship “of modern cargo design” screened by four “T” class German MTB’s. Having taken the enemy by complete surprise the destroyers fired two salvoes before return fire, in which the enemy MTB’s fired on each other. The five Hunt Destroyers passed the enemy ships in the opposite direction at about 4000 yards.
With the large enemy ship on fire the MTB’s turned on the Cottesmore firing their torpedoes at her. In the darkness the Cottesmore heard one of the torpedoes approaching and turned sharply to port. The torpedo narrowly missed passing to starboard.

Two of the enemy MTB were on fire and the remainder turned and fled to the shore and the protection of their coastal batteries.

In the meantime, MTB 236 had caught up and seeing the enemy ship lit up by star shells, closed and fired two torpedoes.

Officer and crew on the Cottesmore witnessed a violent explosion, followed a moment later by a  second explosion. Flames shot up four hundred feet into the night sky. A great plume of smoke rose three thousand feet into the sky. The enemy ship disappeared completely leaving burning oil over a square mile of sea. Her magazines, full of munitions to sink British ships, had exploded. The Komet had gone with the loss of all 251 Officers and crew. The German Officers of the escorting ship’s, none of whom saw any torpedo hits on the Komet, considered it was gunfire from the destroyers which scored a direct hit on her forward magazines causing it to explode.

A backup flotilla of destroyers more than thirty miles away saw and heard the explosion. 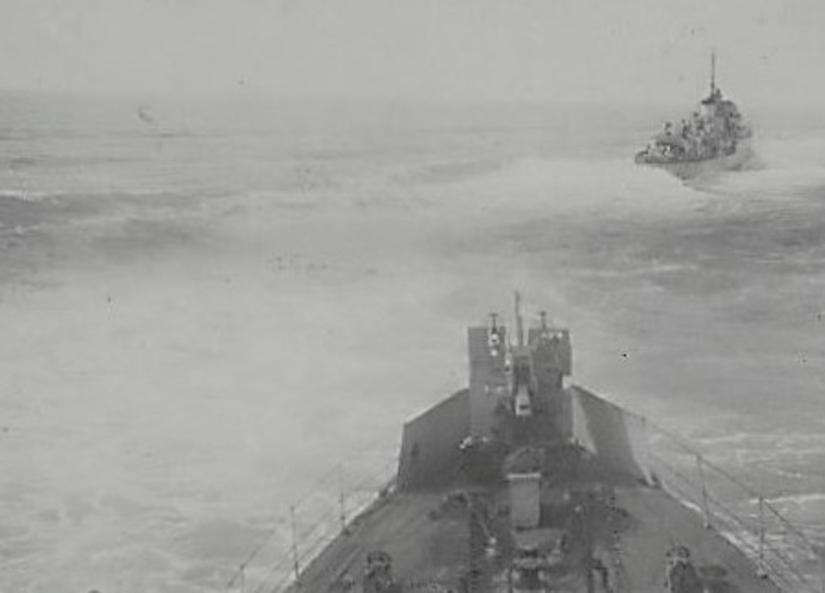 German Raider Komet. She was armed with  "hidden” guns and torpedo tubes.

May 1944. Selected for duty with Force G in support of allied landings in Normandy, D-Day, as part of Operation Neptune. 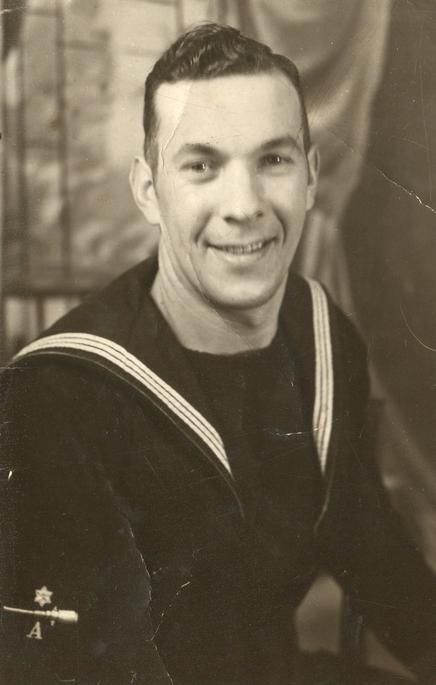 December 25, 1940. Convoy WS.5A was ordered to “scatter” when it was attacked by the German Heavy Cruiser Admiral Hipper.

Two troopships SS Empire Trooper and SS Arabistan were hit by shells. When attacked by the British escorts the Admiral Hipper fled but not before hitting HMS Berwick with several 8-inch (which for the most part passed right through the ship) and 4.1-inch shells. Admiral Hipper then disengaged, to prevent the British destroyers from closing and launching a torpedo attack. 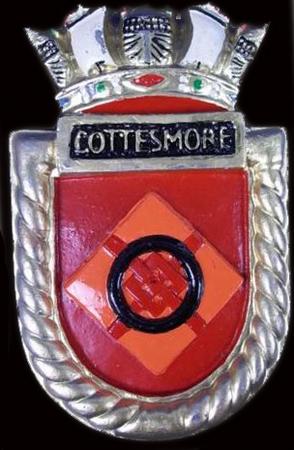 ​​After the D-day beaches had been secured the fall of the port of Le Havre on the east flank was inevitable.  The German ships in Le Havre were expected to leave the port and attack the shipping at the D-day anchorage and ships were also trying to re-supply La Havre with ammunition. Nightly German e-boats left Le Havre to attack British shipping and create a diversion while supply convoy attempted to enter.

Seven German type III (pointed bow) Tank Landing Craft with a built up gun platform for 88’s, were used to attack British ships. (The 88 mm gun was used by the Germans as an anti-tank, anti-aircraft, and artillery gun.)

By this time at Combined headquarters there was some concern as the enemy was aware of the disposition of the British Fleet and a fierce response was expected by torpedo bombers and mines laid by planes and surface vessels.

28 August 1944, The last German ships left La Havre. Due to a number of breakdowns and other circumstances the only ships stationed off La Havre were HMS Cattistock (Lt R. G. D. Keddie, DSC) and HMS Retalick. When the German ships came out of La Havre the British ships attacked immediately and were soon under fire from the German ships and the shore batteries.

Almost at once the Cattistock’s bridge was hit by a German shell, destroying her gunnery control equipment and killing her captain, Lieutenant Keddie.

With the Cattistock out of action HMS Retalick chased the German MTB’s but they managed to escape to Dieppe. Although three were later sunk by British MTB’s while trying to escape through the Dover Straights.

August 1944. Released from Operation Neptune and returned to Sheerness to resume coastal convoy escort duty and patrols with the 21st Destroyer Flotilla.

1 Nov 1944. Detached with HMS Garth to escort HM Monitors Erebus and Roberts during passage to Walcheren Island for bombardment of enemy positions. It was important to clear the enemy from the banks of the Scheldt Estury to allow the Queenborough minesweepers to open the Port of Antwerp.