​15th October 40. HMD Holderness rescued 19  crew from the cargo ship SS Frankrig after she struck a mine off Orford Ness, Suffolk.

Oct-Nov 1940. Destroyers from the Nore Command including from Sheerness Campbell, Garth, Vesper, Holderness  and Venetia patrolled the German occupied French coast attacking vessels that were building up for the German Invasion of England.

10 March 1941. HMS Holderness shot down a Ju88 aircraft over the Thames Estuary. The Junkers 88 was a German bomber with a top speed of 298 mph and carried a bomb load of 3,968 pounds. It was also used to drop magnetic and acoustic mines by parachute.

14 March 1941.While on escort duty with FS convoy the Holderness was in action against E-Boats which were attacking ships.

1st July 1941. The Luftwaffe dropped a large number of acoustic mines in the Thames Estuary. One which landed at Leysdown, on the Isle of Sheppey and was defused by Lieutenant Cliff RNVR.

5 July 1941. Five days later HMS Holderness detonated one of these mines and sustained major structural damage. This was the second mine the Holderness had detonated.

While on convoy duties in the North Sea suffered a heavy explosion beneath the ship on the starboard side abreast the fore end of the bridge. Speed at the time was 26 knots. Very minor structural damage occurred in way of the explosion. Minor flooding occurred in No. 1 boiler room and No. 1 boiler was shut down due to loss of feed water. Minor damage was done to castings.

Fighting Efficiency - Seriously impaired. Speed was reduced to 7 knots. No. 2 gun was temporarily in local control, and the rangefinder A/S, D.G.  and gyro were out of action due to shock.

20 Feb 1942.Once again, out of the darkness German E-boats attacked a British convoy. Convoy FS29 (FS729) Departing Methil on the 18th Feb 1942, arriving at Southend on the 20th Feb 1942 was escorted by the Sheerness Destroyers of the 21st Flotilla.

The sea battle erupted into four separate actions near Hearty Knoll, north-east of Lowestoft, off the Norfolk coast. While the other destroyers guarded the convoy HMS Holderness was on patrol monitoring the radio channels listing for German “chat” to give warning of any pending attack. Signals from German boats were picked up and it could only be E-boats. Forewarned, the British Destroys lit up the night sky with starshells. German E-boats were silhouetted and the Holderness and other escorting vessels opened up with their 4 inch guns, their 2-pound quad mounted pom-pom guns and their 20mm Oerlikon Anti-aircraft guns. Two e-boats were sunk and almost certainly a third.

The Holderness sped after the E-boats firing its 2 pounder "bow chaser" as it did. Sighting the German Schnellboote (German Motor Torpedo boat) S53, the Holderness pursued. Discovering the S53 seriously damaged with its bow sliced off, after being in a collision with S39, the Holderness closed in to capture the vessel and rescue its crew.

Lieutenant White bought the Holderness to a stop side by side with the S53. As Lieutenant Ditchman jumped across with a rope to secure the S53 to the Holderness, the E-boat captain blew it up. The roof blew off the E-boats wheelhouse and it erupted in flame from end to end. The boarding party, nevertheless, boarded the S53. Ammunition began to explode and flamed were enveloping the torpedoes which were in danger of exploding. Leading seaman W. R. Read drenched the torpedoes with water from a hose even though live ammunition was bursting around him. The boarding party returned with prisoners and the S53 was abandoned. In all eighteen prisoners were taken, the Captain was not amongst them having been killed in the explosion he detonated.

Three groups of E-boats from the 2nd and  4th flotillas attacked Convoy FN55 and sailing in the opposite direction FS49. HMS Holderness and also from Sheerness HMS Pytchley fought of the E-boats but the cargo ship SS Horseferry was torpedoed and sunk by the S70. Seven survivors from the Horseferry were picked up by (Motor Launch) ML151.

Six Motor Gun Boats were in the area and they sunk the S38 and pursued the remainder capturing the S111 until they in turn were pursued by the enemy.

Only a few hours later HMS Vortigern was torpedoed by an E-boats north of Cromer with the loss of 96 of her 110 crew. 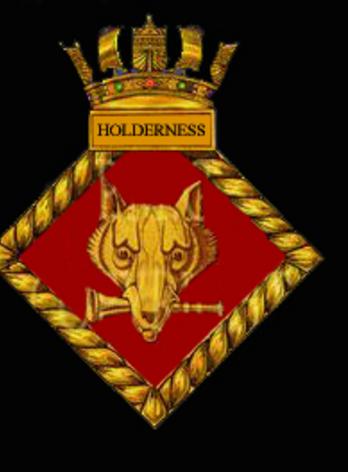 BADGE
​On a Field Red, a fox's mask holding in the mouth a hunting horn gold. 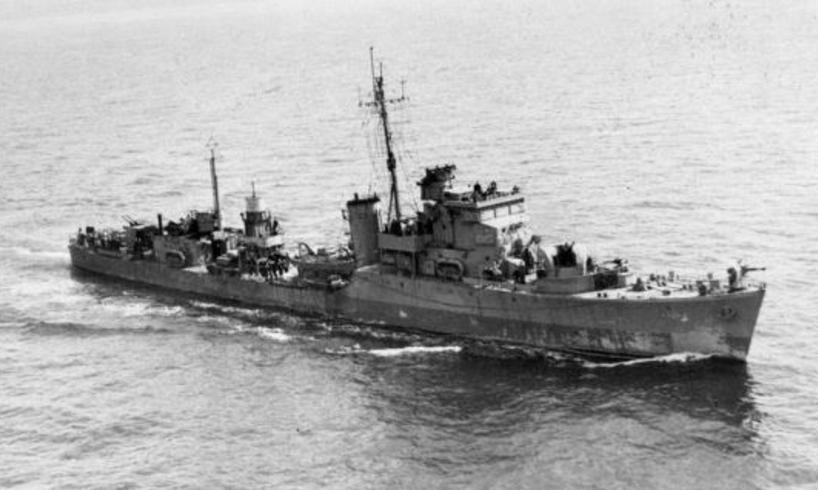 HMS Holderness was laid down on 29th June 1939 and launched on 8th February 1940.  The ship was adopted by the civil community of Amman Valley in Wales and is named after fox-hunt in Yorkshire. 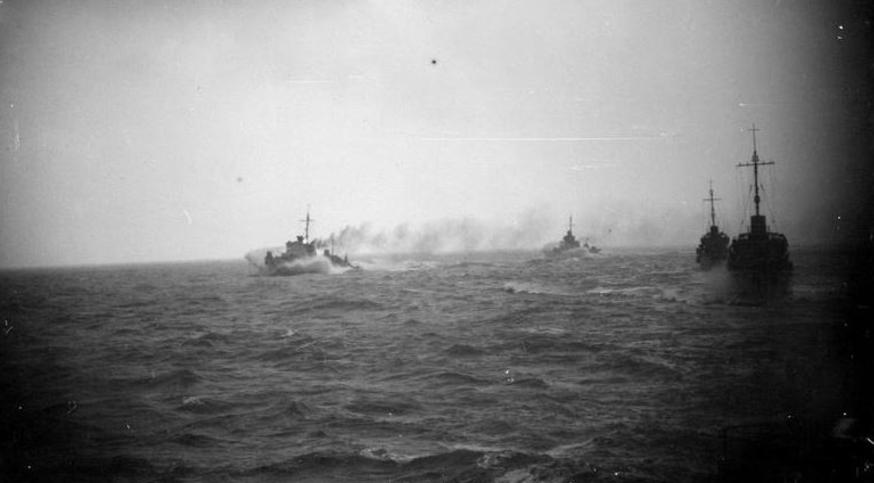 HMS Holderness. The additional “Bow Chaser” gun for anti-E-boat work can be seen on the bow.

One Non-contact Acoustic Mine, 9 fathoms.

Time out of Action, 6 Days.

Holderness was proceeding in the North Sea at 20 knots when an explosion occurred ten yards of the port quarter. The sliding feet of the port and starboard H.P. turbines were damaged and some castings of auxiliary machinery were fractured. Only minor structural damage was sustained aft.

Fighting Efficiency. Slightly impaired. The vessel was able to steam and could remain in action.

5 Sep 1940. Arrived at Sheerness to joined the 21Flotilla for convoy defence in North Sea and Channel.

16 Sep 1940. The dangers of patrol duty in the North Sea became clear when the Holderness detonated mine only ten days after arriving at Sheerness. Damage was slight.

One Non-Contact Mine in 17 fathoms charge about 90 pounds.

Time out of action, 6 months.

HOLDERNESS was escorting a convoy off Cromer at 11 and a half knots when an explosion occurred under or immediately abaft the stem. The after end was lifted and the side plating, framing and decks, abreast the after magazines and steering compartments, from the keel to the upper deck were severely buckled. Whipping also caused buckles abreast the after boiler room and bridge and between after oil fuel tanks. The rudder was blown away. There was minor controlled flooding in the steering compartment, after magazine (No.3) and after boiler room. The after oil fuel tanks were contaminated by sea water. Both steering motors were put out of action. One holding down bolt on the after 4-inch gun fractured and the depth charge trap was distorted. Shock damaged W/T aerials. C.S.A. smoke filled the after compartments and prevented an immediate assessment of damage.

Fighting Efficiency - Seriously impaired. The ship was able to proceed at 15 knots steered by her main engines. Endurance was reduced by the contamination of the after fuel tanks.

REMARKS This incident emphasised the need for:

1. Carley floats stowed abreast the after superstructure in Type 1 Hunts to be repositioned to allow movement of the portable diesel pump along the upper deck.

3. Fitting of rigid resilient mountings to steering motors and pumps. This was approved C.A.F.0.2724/44 refers.

HMS Holderness was so seriously damaged she could not make it to harbour and was beached near Parkestone Quay, Harwich.

8 Dec, 1943.HMS Holderness was towed to Millwall Docks in London for repair.

Jan, Feb, March, April, May and early part of June 1944.Under repair and on trials.

HMS Holderness escorted at least thirteen convoys to and from the D-day beaches. These were not without incident. Many returning convoys had ships on tow, e.g. Convoy FTC32, escorted by HMS Holderness had three ships on tow. Convoy ETM15, escorted by HMS Holderness, arrived off the D-day beaches on the 24th June 1944. Weather prevented the immediate unloading of men and supplies. The Charles W Eliot an American ship detonated a mine which had been dropped by German aircraft and sunk. But the biggest tragedy was when the Derrycunihy also detonated a mine. The Derrycunihy was a troop ship carrying the 43rd (Wessex) Reconnaissance Regiment. The explosion broke her in two with the rear half sinking and the front half being beached. One hundred and eighty-three troops lost their lives and 25 of the ship’s crew and gunners were also lost.

Convoys the Holderness escorted to and from the D-day landing beaches included;

15th February 1945. The Dutch tanker LISETA (Capt. P. Buisman) was torpedoed and sunk by a German midget Seehund type submarine U-5332, off Margate. The crew were saved by HMS HOLDERNESS, although 16 crew were killed in the engine room.

HMS HOLDERNESS remained in commission after VJ Day (Victory in Japan) and continued service at Chatham in the Local Flotilla until 1946. She was laid-up at Harwich in 1953 and scrapped in November 1956.