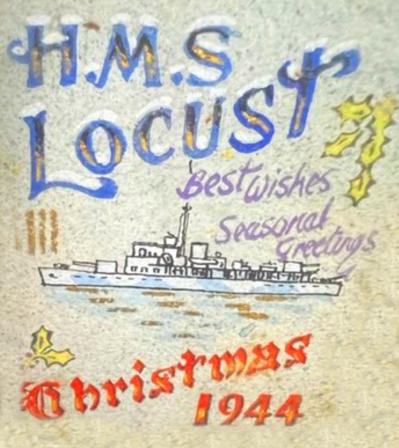 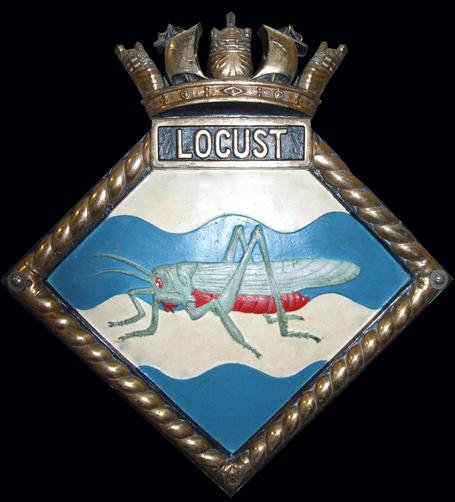 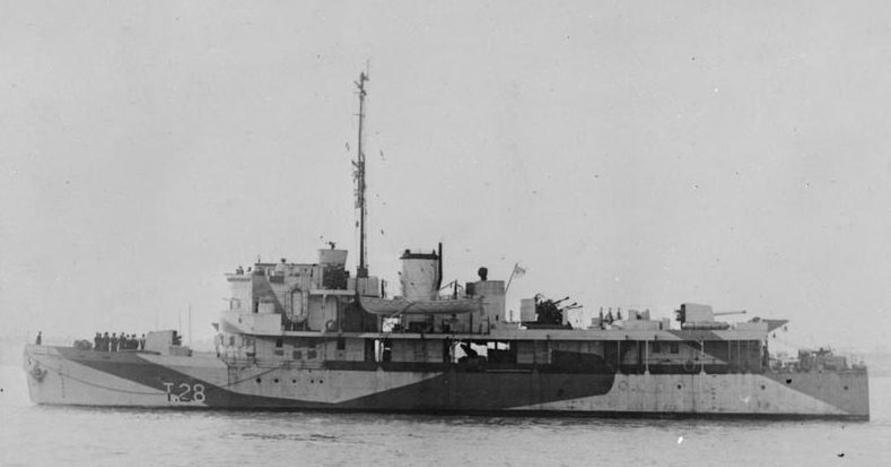 Ivor 'Jim' Skinner, sent to us by his grandson, Alan Skinner. Alan tells us that Jim was on HMS Locust from the ship's launch and left after Locust hit the mine. He went in to training and was eventually posted to HMS Resolution before she sailed to the Indian Ocean in 1942. In 1943 he transferred briefly to HMS Revenge, I believe Churchill travelled some of the journey to the Tehran Conference aboard her at the same time, this was his last active posting.

27 May 40. Gunboat LOCUST arrived at Sheerness from Portsmouth. She was based at Sheerness as an anti-aircraft ship in the Thames Estuary and for escort duties in the North Sea and English Channel. Although it was not known at that time, the Locust would be the last river gunboat to fly the White Ensign.

​Commander W. J. Stride of HMS Locust, who distinguished himself at Dieppe and D-day, giving Princess Elizabeth a tour of HMS Victory.

In recognition of his services, upon his retirement, Lieut. Com. W. J. Stride was made an honorary commander of HMS Victory.

Locust, during the Combined Operation Raid on Dieppe, was under fire from Coastal batteries and received a direct hit on the bridge superstructure.

There was loss of life.

After Dieppe the Locust had a refit in time to be operational for the Normand Invasion of German Occupied France by the Allies.

6 June 44. D-Day. On day one of the Normandy landings, HMS Locust was stationed off Sward Beach acting as group headquarters ship for force S1.

16 June 44.While off "Sword" beach HMS Locust was hit by a German artillery shell killing three of her crew and seriously injuring 11 others.​

​“On that fateful day, amongst the wounded was Stoker Harry Walter Rubins. Harry was coming up on deck on the land side of the ship when the shell exploded. Should he have come up on the seaward side he would not have been injured.

Although wounded himself, he went on to help other wounded crew members and recovering the bodies.

Harry has a souvenir of WW2. When the Locust shot down a German Plane and the pilot was recovered he swapped cigarettes and rum for the pilots Luftwaffe belt.

Alfred Miller, top row left.  Ivor 'Jim' Skinner, bottom row, second left, wearing the shiny (leather?) coat.  Jim being in the picture confirms it would have been taken in 1940 and the likelihood is all the chaps were Locust crew. 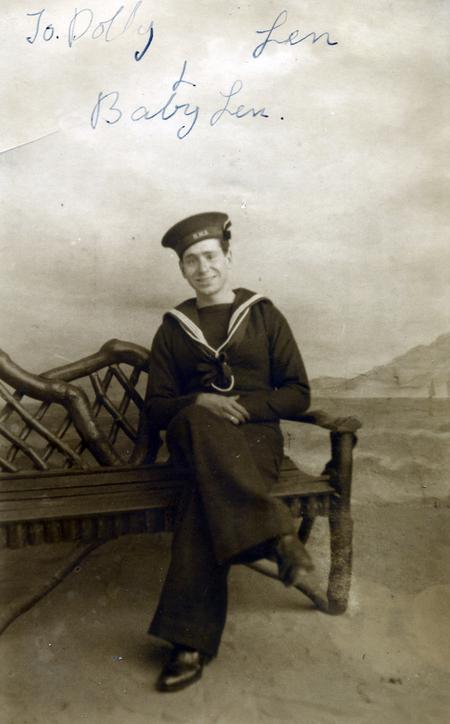 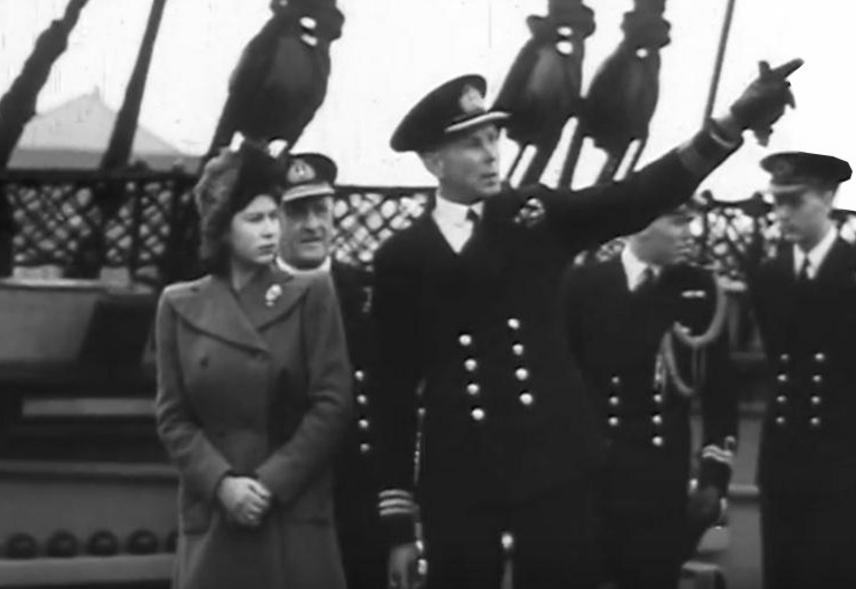 Thank you to David Rudland who gave us the following additional information about HMS Locust from the Navy News, March 2003.

"In January 1943 the Locust was at Portsmouth having just finished a period in dock, having undergone, quote: "various repairs, alterations and additions". The next 18 months were officially spent "at Portsmouth" with "Force J" doing what exactly I am still not sure. I have heard only a couple of stories of this period from my Great Uncle Ruben Lane, via my Grandfather, some of which may be fact, an embellishment of the truth or maybe just fiction? The stories that I have heard I will not recount here, but all are based on the general theme of "quiet night time visits" across the English Channel to occupied France. 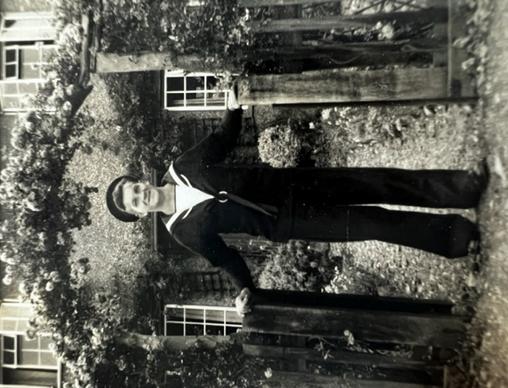 Thank you to Sheila Leahy  who sent us a photograph of her father George Calow who served on HMS Lucust. Sheila tells us, "He was very silent about the war but did write a journal of D-Day . I also have a lovely hand painted Christmas card sent from the ship 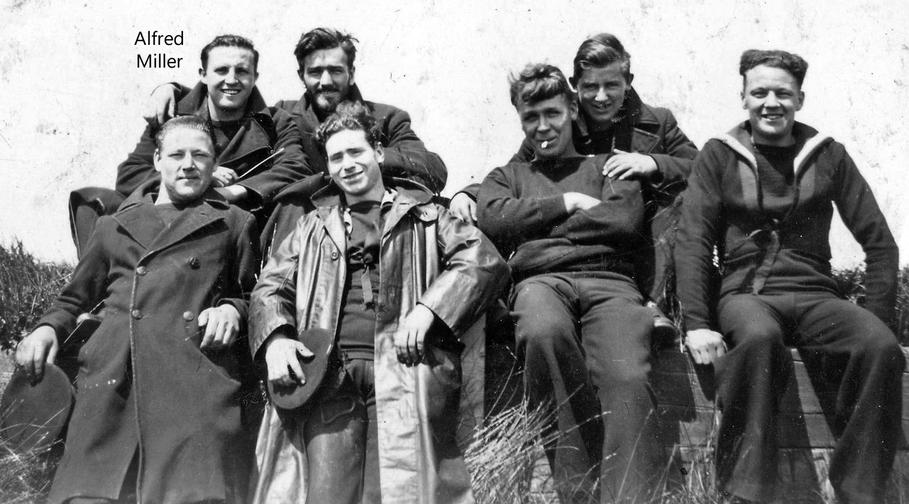 One Non-Contact Acoustic Mine in 15 fathoms.

Time out of action - 5 months.

LOCUST was proceeding at 14 knots in a position 3 1/2 cables north of N.W. Shingles Beacon when a heavy explosion occurred 10 to 15 yards astern of her. The plating between frames was dished, up to a maximum of 1 inch, from the middle of the engine room to the stern. The inboard arm of the port “A” bracket was fractured and minor machinery damage sustained. The hold was flooded from the fresh water tank aft.

Fighting Efficiency - Seriously impaired. LOCUST proceeded under her own power until the weather deteriorated when she was taken in tow.

HMS Locust was repaired at Tilbury, completing on 7 January 1941 after which she returned to anti-aircraft and escort duty.

In February 1940, Lieut. Com. W. J. Stride was in command of HMS Tedworth, a Deep Diving Tender  when her divers salvaged two Enigma Rotors from the German submarine U-33 off the Firth of Clyde. He would be involved with the Enigma machine again on the Dieppe Raid.

At Dieppe, HMS Locust disembarked a team of special commandos to capture the Enigma machine from German vessels in Dieppe’s Harbour and the German headquarters, located at Hotel Moderne.

​In the early morning of 19 August HMS Locust carrying Royal Marine commandos, Commando HQ, ‘A’ Company and No. 1 Demolition Party, in all 172 men, arrived off Dieppe. The element of surprise was already gone as forward Royal Navy units had run into a German Patrol.

With smoke reducing visibility, HMS Locust with her party of commandos entered Dunkirk harbour passing the mole. At this point she came under heavy fire from German shore batteries and was hit twice with two men being killed and six wounded.

Locust join the destroyers bombarding the shore batteries as the commandoes arrived on the beaches, under murderous fire.

The tanks becoming bogged in the shingle of the beach and unable to climb over the seawall were soon destroyed by the enemy. With most units being pinned down on the beach a withdrawal was ordered.

​Parachutes were coming down all around the British ships. Two fell near locust. Locust signalled to SGB 9. (Steam Gun Boat 9) “Pick up two pilots astern of me.” Both pilots were rescued and both were German.

At 11.12 Locust signalled to SGB 9 “Give support at rising ground at end of Green Beach.

Not knowing which end of Green Beach to shell or the position of the Canadian troops , SGB 9 signalled by lamp to Locust, “Can we help you support Green Beach?”

But just then a general signal to all ships came through “All ships. Make smoke. Executive signal."

Harried by German Aircraft which were sometimes chased off by British planes, the British force retired to Portsmouth.

You will find out more about the Dieppe Raid HERE, ​

HMS Locust T28. River Gun Boat. Heroine of Dunkirk when she famously evacuated large numbers of troops  from the beaches of Dunkirk and towed back the crippled Sloop HMS Bideford. 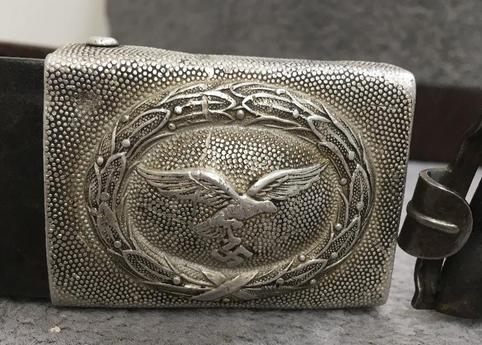 The Luftwaffe belt  bought with  cigarettes and rum for the German pilot by Harry Walter Rubins.

Time out of action – Nil.

LOCUST, while operating off the Normandy beaches, was fired on by shore batteries and hit by a shell which caused slight damage.

Amongst those whose who lost their lives were,

24 June 44. The SS Derrycunihy having arrived off Sword beach in a storm was unable to unload and after waiting for three days it was decided to move her to Juno beach and unload there. As the ship started her engines on the morning of 24 June it detonated an acoustic mine. The mine exploded directly beneath the ship breaking her back and splitting the ship in two. While the front half stayed afloat the back half, full of sleeping troops, sunk in minutes with great loss of life. Ammunition exploded and oil set the sea on fire. The Locust ignoring the danger quickly came alongside and picked up survivors.

On release from operation Neptune, the Navy side of Operation Overlord, the D-day landings, HMS Locust returned to the roll of a minesweeping headquarters ship based at Harwich.

She would take part in managing the mine clearance operations around the coast of Holland and the clearance of mines from the Port of Rotterdam.

Oct 45.  HMS Locust returned to Sheerness for refit in preparation for deployment in the Far East, but with the war rapidly coming to an end this was cancelled.

May 46. HMS Locust was placed in reserve.

1951. HMS Locust was converted to a R.N.V.R. drill ship for the Severn Division at Mardyke Wharf in Bristol City Docks.

MBE. Member of the Order of the British Empire.
Lieut. Com. W. J. Stride was awarded an MBE on the 11 May 1937 on the Coronation of His  Majesty King George VI and Queen Elizabeth.

DSC, Distinguished Service Cross.
14 November 1944. Lieut. Com. W. J. Stride  was awarded a DSC for his part in Operation Neptune (The Royal Navy part of D-day, the Normandy Invasion of German occupied Europe by the Allies.

​27 May 40. Gunboats, Locust (Lt A N P Costobadie) and sister ship Mosquito were both with the Nore Command and based at Wildfire Sheerness as part of the Thames Estuary Defence Flotilla.

29 May 40.  On the Locusts first evacuation trip to Dunkirk the Sloop HMS Bideford was bombed.

HMS Bideford a 1,150 ton Sloop had been taking on troops from smaller boats off Brey six miles east of Dunkirk. She had loaded over 400 troops when she was attacked by German bombers. A bomb struck her deck and detonated one of Bideford’s depth charges blowing off forty feet of her stern and killing 16 of her crew and 12 evacuees. Fifty more crew and troops on her deck were badly wounded.  The uninjured survivors and walking wounded were transferred to other ships, while the badly wounded remained in the care of the Bideford’s doctor, Surgeon Lieutenant John Jordan and George William Crowthers of the 6th  Field Ambulance who had arrived with the troops.

Both men had volunteered to stay with the wounded and as the Bideford had beached in the shallow water there was little hope of them returning to Britain.

1 June 40. The Gunboat Mosquito, sister ship to the Locust also based at Sheerness, was badly damaged by German bombing with Lt A. H. Manwaring and eight of her crew missing presumed killed. HMS Locust scuttled the Mosquito.

3 June 40. HMS Locust returned once again from Dunkirk and embarked 196 troops. At 16.25 hours she departed Dover for Sheerness.

In the meantime, Major Mark Henniker after a desperate rear-guard battle arrived at the Bray-dunes at Dunkirk to find the last evacuation ships had gone. He found two beached rowing boats and stocking them with food and water, two officers and thirty men hauled them into the sea and began to row towards England. They picked up three more men e-route who were drifting aimlessly in a boat without oars. With the help of the tide they were soon out of sight of the European coast. Finding a deserted larger vessel showing the scars of an air attack, they transferred to her and struggled towards England.

HMS Locust found them and took them into Dover.

HMS Locust, between 29th May and 4th June took off 2,036 allied soldiers from the beaches of Dunkirk and delivered them to safety. They also came back with an extra member of their crew, a puppy which they found on the East Mole.

Following Dunkirk HMS Locust was based at Sheerness as an anti-aircraft ship in the Thames Estuary, as well as escorting convoys in the English Channel and North Sea.

June 1940. HMS Locust shot down a Messerschmitt 110 over the Thames Estuary The crew of the Locust rowed out to rescue pilot. The Rear Gunner did not survive the crash.

8 Oct 1940.HMS Locust detonated an acoustic mine and was seriously damaged.