The first Liberty ship, FORT CATARIQUI, on its way along the Scheldt to Antwerp.

No matter where based all Nore Command BYMS Flotillas, during the biggest and most important mine sweeping operation ever, the sweeping of the Scheldt, were under the command of Captain Hopper, Captain of Minesweepers based at Wildfire III, Queenborough.

BYMS and MMS’s cleared the coast, estuaries and harbours of France, Belgium, Holland and eventually Germany, of mines.

The people of Holland were close to starvation and Germany, once it had surrendered, required large amounts of food which could only arrive in ships. It was the BYMS which cleared the ports of Holland and Germany allowing these humanitarian supplies to be delivered.

BYMS and MMS’s played an absolutely vital part in the success of the War in Europe and supplying aid to the war torn European countries.

THE BYMS AT WILDFIRE III, QUEENBOROUGH.

Supreme commander Eisenhower stated, “A stretch of a week of bad weather in the channel, a condition that is growing increasingly probable as the summer recedes, would paralyse our activities and so make the maintenance of our forces exceedingly difficult, even in defensive roles.” It is essential we gain a deep water port to support major forces in an invasion of Germany.

Eisenhower sent a signal to Field Marshal Montgomery. “Unless we have Antwerp producing by the middle of November our entire operations will come to a standstill. I must emphasise that, of all our operations on the entire front from Switzerland to the channel, I consider Antwerp of first importance.

Eisenhower on the 16 October 1944, ordered Montgomery, “the free use of the port of Antwerp is vital to the allied cause and we must be able to use the port soon. Operations destined to open the port will therefore be given complete priority over all other offensive operations.

Even before the banks of the Scheldt were cleared of German troops the formidable task of sweeping 80 miles of estuary and river fell to Captain H. G. Hopper R.N., Captain of Minesweepers, Sheerness, Captain Hopper was based on the St Tudno, the Wildfire III, Queenborough, base ship situated in the Scheldt during that period. See, http://www.wildfire3.com/st-tudno.html.

2 November 1944 to 26 November 1944. During this period the vital waterway through the Scheldt was being cleared of mines to opened up the Port of Antwerp. The Allied Forces (British, Canadian and American) had almost come to a standstill because of over stretched supply lines and urgently needed resupplying with huge amounts weapons, munitions, men and supplies.  Captain Humphrey Greenwood Hopper, DSO, Royal Navy, Captain of Minesweepers Wildfire III Queenborough (Sheerness) was in command of all Nore Command BYMS and other associated vessels for this minesweeping operation. His Base Ship, to be stationed in the Scheldt Estuary, was HMS St Tudno, the base ship of Wildfire III, Queenborough.

Thursday, 2 November 1944. With the battle still raging on Walcheren Island at the entrance to the Scheldt, Force “A” swept inshore and into the mouth of the Scheldt. Force “A” came under heavy fire from the guns at Knokke on the south bank of the estuary with four of the eight BYMS in 165 Flotilla being hit by shell fire and BYMS 2252 losing one of its crew. Even so, several of the BYMS successfully swept into the entrance of the Scheldt sweeping 70 mines on the first day.

157th Flotilla BYMS were shelled from shore when they reached Cadzand (Holland) close to the Scheldt estuary mouth.

3rd November 1944. BYMS 2041 and her sister ships were fired on from the shore resulting in three hits and two fatalities. BYMS 2035 was singled out by the shore batteries with a shell penetrating her engine room requiring her to be towed out of the minefield and back to Harwich.

BYMS 2041 sustained a direct hit to her mess deck but was able to continue sweeping. An acoustic mine exploded ten yards away from BYMS 2051 disabling her. She was towed to safety by BYMS 2076.

In all some 267 mines were swept from the Scheldt with the loss of one minesweeper and one motor launch with all crew members. The task was completed on the 26 November 1944 a week less than estimated. On the 28 November the first convoy of 19 liberty ships arrived at Antwerp to discharge their urgently needs cargoes. When the allies crossed the Rhine into Germany in April 1945, 1,341,610 tons of supplies were landed at Antwerp during that month thanks to the efforts of Queenborough minesweepers.

Leaving for service under foreign flags: Farewell to the BYMS of the Mine Sweeping Flotillas.
(Illustrated London News Sep 20 1947.) Queenborough 1947.

If you, your father or your grandfather have any additional information about these BYMS, crew lists, stories, photographs, please send copies of them to be added to our records and this website. 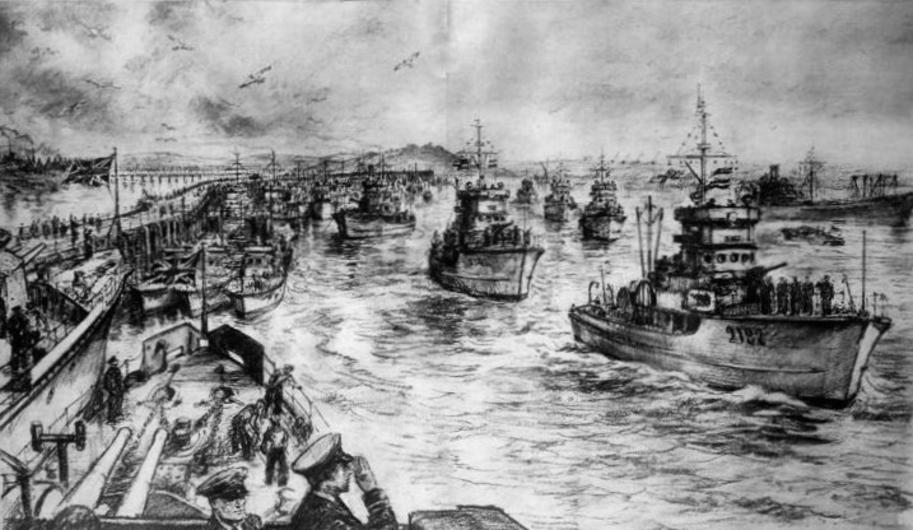 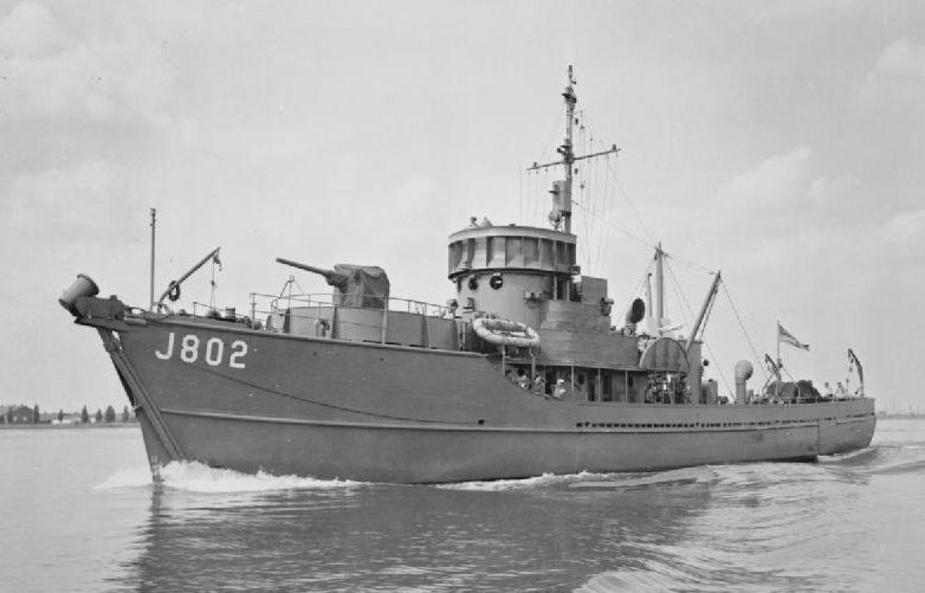 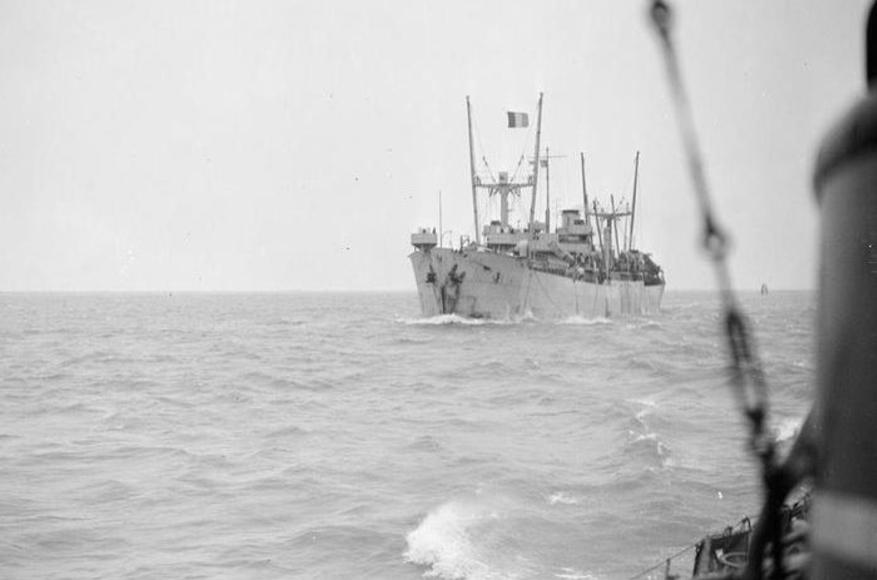 On completion BYMS’s were transferred to the Royal Navy on the far side of the Atlantic Ocean at ports on the east coast, and sometimes the West Coast, of the United States.

Newly formed crews on unfamiliar vessels then had the formidable task of sailing their BYMS across the Atlantic Ocean, often in winter. 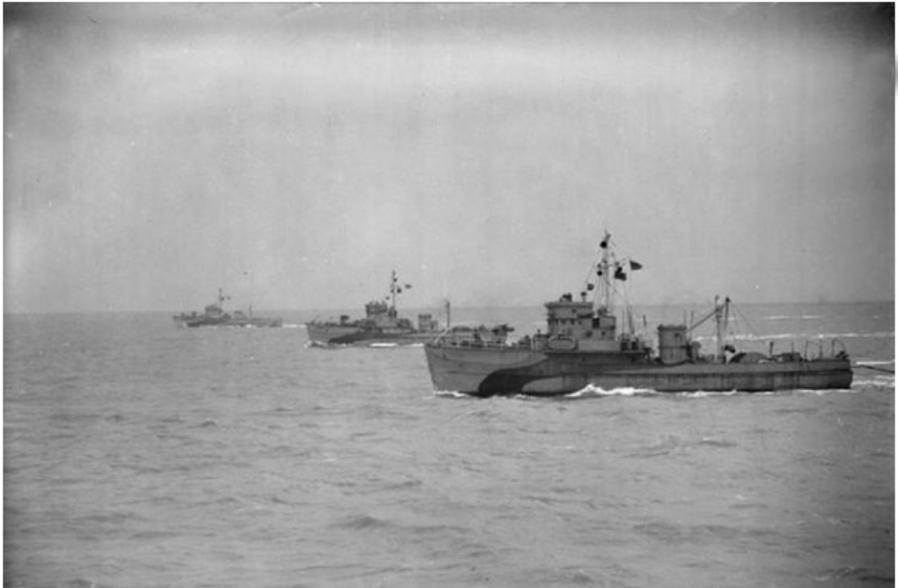 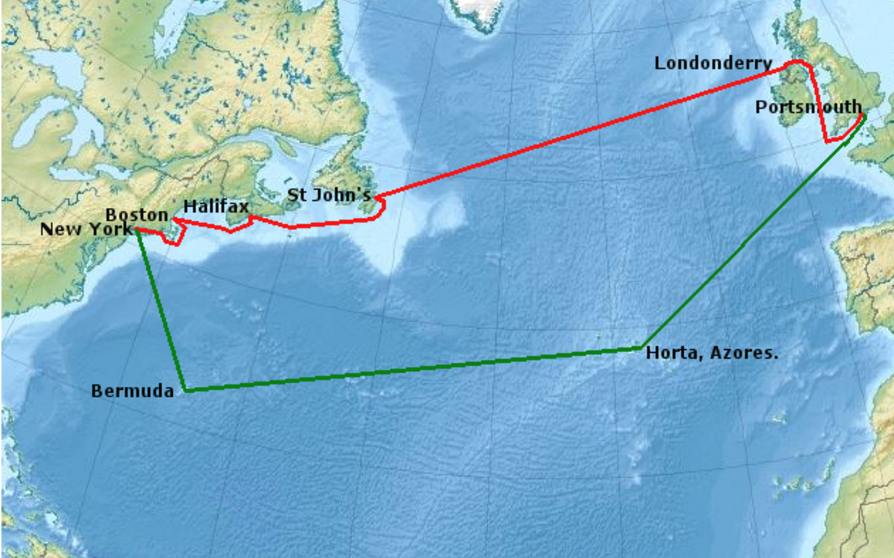 Eighty YMS were ordered by the U.S. Navy specifically for transfer to Great Britain under Lend-Lease. For accounting reasons, they were carried on the Navy List as "British Yard Mine Sweepers" (BYMS) and numbered in a separate sequence from 1 to 80. Upon transfer to Britain, BYMS-1 to BYMS-80 were assigned the British pendant numbers BYMS-2001 to BYMS-2080. Seventy more BYMS' had hull numbers from 137 to 284. These were originally built for the U.S. Navy as YMS and transferred to Britain shortly after completion.

BYMS were fitted out with a hot air heating system, an electric cooker, electric toaster, coffee percolators, a refrigerator, flushing toilets, piped hot and cold water, a distillation plant to convert salt water into drinking water for water fountains, proper bunks and some even had washing machines and dryers. But these were frequently removed by the Admiralty, especially in the early days.

For the Nore Command the arrival on the East coast of England of the BYMS, together with the home built MMS’s (Motor Mine Sweepers) were a God send. Until then, the Mine Sweeping Flotilla’s had been struggling to cope with the deadly menace of Magnetic Mines with converted Trawlers and Drifters many of which were built of steel. (Not a very pleasant place to be in a sea full of magnetic mines.)

BYMS played a major part in keeping the East Coast and Channel sea lanes open allowing much needed goods and war supplies to come flooding into the Southeast of England in the build up to D-day.

It was the minesweepers (BYMS, MMS and Fleet Minesweepers) which led the way to the beaches of Normandy when Britain returned to Europe. It was the BYMS which swept ahead of the vital “Follow On” convoys after D-day. The importance of these convoys cannot be over stressed. Once the allies had a foothold in Europe, it became a race to move men and equipment over a difficult sea route, without proper unloading facilities, faster than the enemy could rush in reinforcements.

Apart for the landing craft, the Wildfire III, Queenborough minesweepers went closer to the D-day beaches than any other vessels. A combined press reporter described, “On our port beam I can see a line of tank landing craft heading towards the shore. Grey minesweepers, who had been close inshore are returning. They have plenty of guts those fellows.”

BYMS took every opportunity to give covering fire to the troops with their Oerlikon and 3-inch guns.

BYMS preceded each war ship sweeping them into their firing positions. BYMS 2001 records that after an uneventful passage from England at 0600, while sweeping her Destroyer towards Arromanches, “all hell broke out” with shells raining down on them.

BYMS 2002 swept in the Destroyer HMS Grenville and continued sweeping to within half a mile of the shore by which time it became too shallow. Shells were falling all around with several exploding between her and her Oropesa floats. BYMS 2003 also experienced several near misses astern.

The routes taken by the BYMS’s from the United States to England.

A journey across  the Atlantic in BYMS only 130 feet in length required crossing two long sections of Ocean. The Distance from St John’s, Newfoundland, Canada to Londonderry in Northern Ireland is 1992 miles, (1731 nautical miles) 3206 kilometres. The distance from Bermuda to Horta in the Azores is 2067 miles, (1796 nautical miles) 3327 kilometres.

BYMS were hand built of a wooden construction, most taking between ten and twelve months to complete with the shortest time being 123 days and the longest 597 days with an average build time of 321 days. This was much longer than the greatly larger steel built cargo liberty ships which took an average of 42 days to build.

(For more information on individual BYMS click the highlighted numbers above.)

Although BYMS were usually allocated to a flotilla at the time of commissioning, they were often transferred to other flotillas, sometimes on a temporary basis and sometimes permanent. BYMS were borrowed by other flotillas and there was also considerable mixing and matching from different flotillas when on major minesweeping operations.​